As watch saga drags on, all eyes on NACC
Thailand
Politics

As watch saga drags on, all eyes on NACC

The public is focused on the National Anti-Corruption Commission (NACC), its delays and lack of transparency in Gen Prayut's million-dollar watch collection.

The National Anti-Corruption Commission (NACC) will write to Deputy Prime Minister Prawit Wongsuwon in the next few days, demanding he provide specific details on how he acquired 25 luxury watches he was seen wearing in pictures shared online.

NACC president Watcharapol Prasarnrajkit said Wednesday he was informed of the update by the agency's secretary-general.

The deputy premier will be asked to furnish precise details of the watches exposed in recent news reports, including the brand names, price tags and dates he wore them, Pol Gen Watcharapol said.

"Gen Prawit must give his explanation within 15 days," said the NACC chief. 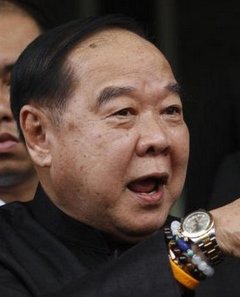 Gen Prawit: 'Too busy' to cooperate

The NACC has been forced to delay announcing the result of its probe into the matter by several months as it waits on Gen Prawit to fully cooperate.

"The issue will be clearer [next month]," Pol Gen Watcharapol said.

At issue is how Gen Prawit was able to afford such expensive watches on his salary and why he did not list them among his declared assets.

He has since claimed they belonged to friends and have now all been returned.

Responding to reports he twice sought to postpone giving a written explanation to the anti-graft body, Pol Gen Watcharapol said the deputy premier has informed the NACC he was too busy with his duties.

It is believed he may need some time to gather the information as some of the watches were worn a long time ago, Pol Gen Watcharapol said, adding he did not suspect Gen Prawit was deliberately stalling.

The deputy premier was well within his rights to seek the postponements, even if they dragged out the inquiry, the NACC chairman said.

Responding to a member of the government-installed National Anti-Corruption Committee, who expressed concern about the NACC's handling of the case, Pol Gen Watcharapol said the accusation against Gen Prawit is serious, so the NACC needs to examine the case thoroughly.

Based on the the body's inquisitorial system of deliberating cases, Gen Prawit must provide a full and thorough account, he said.

Gen Prawit was spotted by the media late last year wearing a luxury watch, believed to be a Richard Mille worth at least 2.5 million baht, and a diamond ring, items that were not included among his declared assets.