According to members of the junta-appointed National Legislative Assembly, these and other internet social media need taming with a new law before an election. (Graphic adapted from Socialbakers.com)

The National Legislative Assembly (NLA) wants the government to enforce a new cyber law to control election campaigns on social media before next year's general election.

Such a measure should be added to the cyber security bill, now being vetted by the government's legal advisory body, the Council of State, as wrongdoings in the cyber world often go undetected, especially if they are committed in the run-up to or during an election, NLA president Pornpetch Wichitcholchai said Monday.

Lawmakers are scheduled to enact the bill after it has been given the green light from the cabinet and the Council of State.

The government should propose this additional clause to the NLA before the upcoming election because "any delay would mean it only has the ordinary national security law in place during the election", Mr Pornpetch said.

Though a prevailing set of laws can be used to prevent and crack down on cybercrimes, they may not be enough to deal with election fraud committed on social networking sites.

Mr Pornpetch insisted the new bill is not intended to limit freedom of expression, but added that this right should also not be exploited to serve hidden interests.

Concern over the use of social media to benefit election campaigns was raised earlier by Deputy Prime Minister Prawit Wongsuwon, who warned politicians against campaigning as this is still forbidden by an order from the National Council for Peace and Order (NCPO). 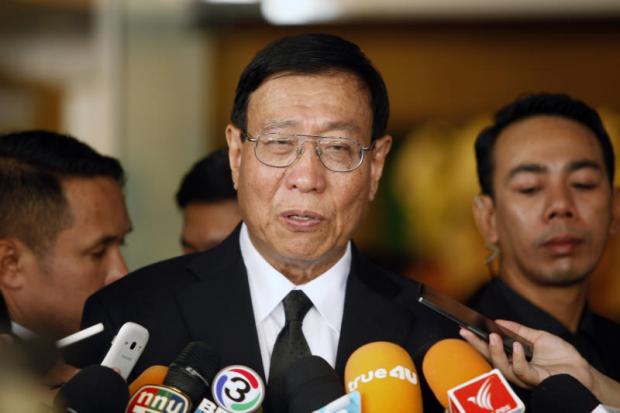 The NCPO plans to partially lift its ban on political activities this month, but election campaigning has not been included on the list of activities it reportedly plans to permit.

Facebook and other social media sites should not be used for campaigning or spreading political propaganda, Gen Prawit said.

The government indicated earlier that activities which will be permitted after the ban is eased include allowing parties to hold meetings to select executives and recruit new members; giving their opinions on the demarcation of constituencies; conducting primary votes to choose election candidates; and contacting party members.

Parties want the government to scrap the ban as they fret about whether their plans to visit people in their constituencies would break the NCPO's order, in light of recent warnings about this.