Impact Arena, Exhibition and Convention Center will host a fund-raising dinner on Dec 19, at a cost of 3 million baht per table. (Photo via impact.co.th)

Former election commissioner Somchai Srisutthiyakorn is urging the Election Commission to investigate a Palang Pracharath Party (PPRP) fundraising plan as it may violate a ban on political activities.

Mr Somchai, now a member of the Democrat Party, posted his concerns on his Facebook page after PPRP secretary-general Sontirat Sontijirawong told media crews earlier that his party is considering raising 600 million baht in funds by organising a Chinese-style banquet.

The event has been scheduled for Dec 19.

The National Council for Peace and Order may lift its ban before that date, giving a green light to the pro-regime party, but questions remain as to whether it's a violation of the NCPO's order. 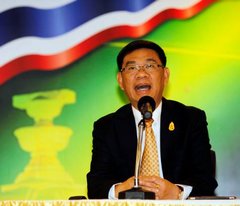 In this case, jobs ranging from booking a venue and making a deposit to sending invitation letters to business organisations are parts of the preparation for the banquet, he said.

"The Election Commission should look into this issue," suggested the ex-EC member.

So far only some political activities including meetings for selected party executives and recruiting members have been allowed. The NCPO agreed last Friday it will lift the ban by the end of December, allowing parties to resume other activities to prepare for a general election scheduled for Feb 24 next year. However, election campaigning will be allowed after Jan 2.

According to Mr Sontirat, his party's banquet will have a total of 200 tables. Participants will be required to pay 3 million baht a table. The banquet venue is set to be held at the Impact convention and exhibition centre in Muang Thong Thani in Nonthaburi.

Mr Sontirat was also criticised Sunday by Thai Raksa Chart Party leader Preechapol Pongpanich for his plan to visit Khon Kaen where village heads, kamnan and members of local administrative bodies are invited to receive him.