Yaowapa Wongsawat is not yet officially wanted but authorities would like to know whether she has fled abroad or is bolt-holed in the country. (Post Today photos)

Gen Prayut's comment on Tuesday came after her former aide, Worawat Ua-apinyakul, said he had not been in contact with Ms Yaowapa for several months since she distanced herself from politics.

One report says the leader of Pheu Thai's powerful Wang Bua Ban faction might have fled overseas as she is believed to be among the suspects in the fake government-to-government (G2G) rice scandal currently being investigated by the National Anti-Corruption Commission (NACC). 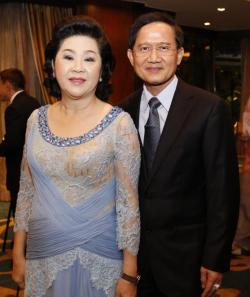 Yaowapa, with husband and former prime minister Somchai Wongsawat: Not been seen for months

"I have no idea where she is, but I think she's hiding in the country," Gen Prayut told reporters. He also said he does not understand what Ms Yaowapa is up to as authorities have not yet taken action against her.

"It's not necessary to be frightened if she's done nothing wrong," Gen Prayut said.

The NACC is expanding its investigation after the Supreme Court's Criminal Division for Holders of Political Positions, found former commerce minister Boonsong Teriyapirom and 16 others guilty in bogus G2G rice deals on Aug 25 last year. Boonsong was sentenced to 42 years behind bars.

A source said Boonsong's information regarding the money trail will be crucial in the NACC's probe.

NACC chairman Watcharapol Prasarnrajkit said earlier investigations into the case will remain valid even though suspects may have fled the country. However, he said, they will lose the chance to defend themselves against allegations.

The Supreme Court ruled last year the rice-pledging scheme, the brainchild policy of the Yingluck Shinawatra administration, cost the country over 536 billion baht in damages.

Yingluck, also a younger sister of Thaksin, fled in August 2017, before the court sentenced her to a five-year jail term for failing to stop corruption in the rice-pledging scheme.