Each party will receive ten minutes' television airtime for a campaign advertisement, while the Election Commission (EC) will also hold TV debates for them to discuss their policies.

EC deputy secretary-general Sa­waeng Boonmee was speaking  after a meeting with executives from television stations to discuss the allotment of airtime for election campaigning by parties ahead of the March 24 general election.

This is in compliance with Sections 69 and 81 of the constitution's organic law on the election of MPs.

Section 69 deals with campaigns by candidates and parties and Section 81 requires the EC to support those campaigns and allows the EC to hold debates for parties to present their policies. 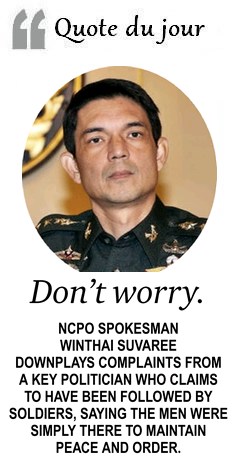 The agency has also issued a set of regulations to support campaigns, educate the public about the election and encourage them to go to the polls.

Mr Sawaeng said that each party will be allowed to produce a 10-minute promotional video. However, broadcasters must give equal time to each party's adverts. The first first hour-long batch of ads will begin on March 8.

The EC will also hold a forum for parties to present and debate their policies. The debates will be taped and sent to television stations for broadcast from March 13-21.

Stations can choose to broadcast parties' election campaign ads and recordings of policy debates anytime between 6am and midnight, Mr Sawaeng said.

Mr Sawaeng also said that some stations can also organise debates, though they need to be sure that parties are given equal and fair treatment.

He added that a total of 105 parties have registered with the EC. When election candidacy registration opens on Feb 4-8, about 60 parties are expected to field candidates to contest the poll.

Meanwhile, registration for advance voting began Monday and will run until Feb 19.

However, the process was disrupted temporarily between 8.30am and 9am due to large numbers of people using the system, said Nath Laoseesawakool, the EC's deputy secretary-general.

He added that the EC has estimated that the number of people voting in advance will be more than 2 million when registration ends on Feb 19.

EC chairman Ittiporn Boonpracong on Monday laid down a policy for election committees and inspectors in 30 constituencies in Bangkok.

He stressed the need for them to carefully deal with fabricated information on social media and ensure the voting goes smoothly in their respective constituencies.

Witchuda Mekhanuwong, director of Bangkok's election committee, said that she will meet City Hall clerks today to discuss the locations where parties will be permitted to erect their posters in the 30 constituencies in the capital.

She added that the Thai-Japan Bangkok Youth Centre in Bangkok's Din Daeng district will serve as a venue for registering candidates.

Candidates for the election can register between Feb 4 and Feb 8. Each party can also submit a list of up to three candidates for prime minister during those five days.

Voters in other countries will be able to cast their votes from March 4-16. March 17 has been set as the date for voters to cast their ballots in advance.

Mr Ittiporn previously said that the EC would try to announce at least 95% of the poll results by May 9.

He was referring to a constitutional provision which requires the EC to "complete" the election within 150 days of the law on the election of MPs taking effect. That happened on Dec 11, putting the deadline as May 9.

Debate is raging over whether the term "complete" refers to when "all ballots are cast" or when "all results are announced".

If necessary, the EC will discuss whether to seek a Constitutional Court ruling on the matter, Mr Ittiporn said.

By law, the EC is obligated to endorse the results within 60 days of the election.

Based on the new date for the poll, the EC will have less than 60 days to endorse at least 95% of the poll results. Under the constitution, parliament will convene within 15 days of almost all the results being announced.