Supporters record with their phones at a sudden unauthorised rally by the progressive Future Forward Party in Bangkok on Saturday. (Reuters photo)

It wasn't only the moves to ban Thailand's most vocal opposition party that brought Gift onto the street for the first time.

The 25-year-old landscape architect was also stung by taunts that her generation was not brave enough to go beyond online comments in challenging the army-dominated establishment's enduring hold since elections to end junta rule.

She and other first-timers joined veterans of Bangkok's turbulent decades of street protest as thousands rallied at the weekend in the biggest demonstration since a 2014 coup.

"They say the new generation only exists on social media, so we're out here to show we have a voice too," said Chattip Aphibanpoonpon, who like many Thais goes by her nickname.

"The conflict used to be about people on two sides. Now it's a battle between the military and the people. It's not fair." 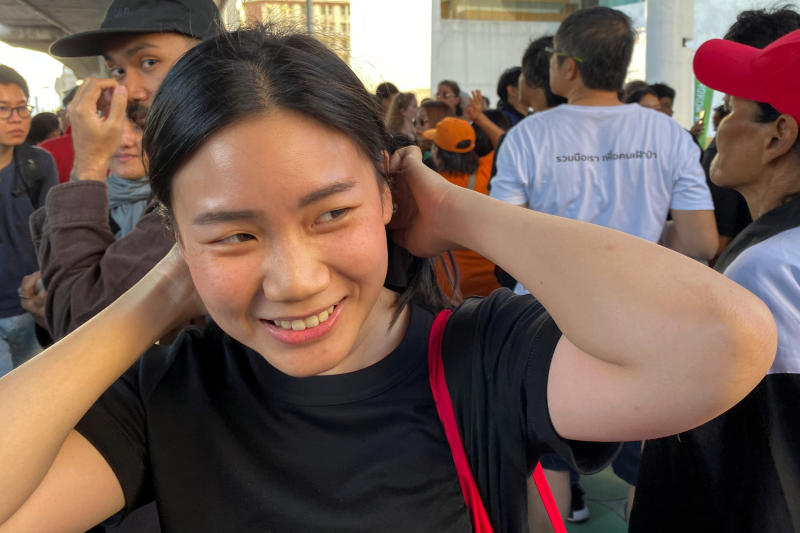 Chattip Aphibanpoonpon, 25, speaks with Reuters during a sudden unauthorised rally by the progressive Future Forward Party in Bangkok on Saturday. (Reuters photo)

In a country long roiled by bloody protests -- and punctuated by coups in the name of ending them -- Saturday's peaceful rally was a reminder of the tension that is building again rapidly between the establishment and those seeking change.

At the forefront is 41-year-old auto-parts billionaire Thanathorn Juangroongruangkit, who was recently banned as a member of parliament and whose Future Forward party faces dissolution.

In both cases, party supporters believe the legal grounds are spurious and designed to eliminate a challenge to Prime Minister Prayut Chan-o-cha, the former junta leader who stayed on after March elections the opposition says were manipulated.

"This is just the beginning," Mr Thanathorn told protesters who spilled in afternoon sunshine across walkways and staircases between a Bangkok shopping mall and art gallery.

The protest was called just a day before as a "flash mob" by Mr Thanathorn's Facebook Live and a single tweet that got nearly 67,000 retweets and 41,000 likes.

It is Future Forward's social media heft -- as well as pledges to change the army-drafted constitution and to end conscription -- that have the army worried.

Army chief Apirat Kongsompong has said Thailand faces a situation of "hybrid war" against a movement he accuses of seeking to use social media to rally people against the army and the powerful palace.

"The young people are enthusiastic and determined and full of energy, but they don't see through politicians' tricks," said Warong Dechgitvigrom, a right-wing politician who sees Future Forward as an existential threat to Thailand and its monarchy.

Government spokeswoman Narumon Pinyosinwat said the party should express its opinions through parliament rather than on the street, but she did not expect the situation to escalate.

The turnout was a reflection of growing political engagement among young people, but would not necessarily spiral, said Titipol Phakdeewanich, dean of the political science faculty at Ubon Ratchathani University.

"I don’t see it becoming a serious movement like in the past or on the scale of Hong Kong," he said.

Widespread coverage on social media underscored the extent to which the opposition leads the government on that front.

The question has been whether online activism would translate into a readiness to take to the street. And it hasn't only been establishment parties casting doubt.

Before Saturday's rally, veteran activist Anurak Jeantawanich challenged Future Forward supporters as "only using hashtags, but afraid to take to the streets". If fewer than 2,000 people showed up "you might as well just let your party be disbanded", he said.

Several thousand gathered, if not the 10,000 plus claimed by organisers.

Pisit Lewlatanawadee, 29, holds up a placard during a sudden unauthorised rally by the progressive Future Forward Party in Bangkok, on Saturday. (Reuters photo)

"We're not only good at typing," he said. "We also want to participate in opposition to authoritarian government."

Rafah Supanphong, 25, told Reuters: "They keep saying we are only brave on online platforms, it encouraged me to come out."

The younger protesters joined many older "red shirts" who recalled years of street clashes and bullets in their support for ousted populist prime minister Thaksin Shinawatra in clashes with pro-establishment "yellow shirts".

Earlier, the Pheu Thai party of the self-exiled Thaksin said it backed the rally by "younger brother" Thanathorn.

A small group of police challenged the rally organisers for holding a demonstration without notice, but they made no attempt to stop it. On Monday, police said they were investigating whether the law had been broken.

Future Forward said it had not been a political rally so it did not need to give notice.

The next challenge for the authorities is a "Run Against Dictatorship" that activists are organising for Jan 12. A Run Facebook page already has more than 28,000 likes.

Like many of those who joined Saturday's protest, Ms Chattip is no radical tempered by hardship in a country where the traditional political fault-line has been between a Bangkok-based elite and the poorer north and northeast.

She works at a company that prides itself on harmonious garden and landscape designs. Her Instagram feed tracks good food, smiling friends and foreign adventures.

"The middle-class tend to not want to participate because we can afford to live normally no matter who the government is. But that's not the way it should be," she said.