The court ruled that the money party leader Thanathorn Juangroongruangkit lent to the party was considered “other benefits” under Section 66 of the Political Parties Act, which limits donations to 10 million baht per donor per year.

The court said the Election Commission, which brought the legal complaint, could now proceed to take criminal action against Mr Thanathorn and 15 other party executives, including secretary-general Piyabutr Saengkanokkul and spokesperson Pannika Wanich.

If convicted, Mr Thanathorn could be jailed for up to five years and the other executives for up to three years.

The political ban means Mr Thanathorn and the party executives cannot join a party or set up a new one for 10 years. Without the right to vote, they also automatically cannot run as MPs since not losing the right to vote is one of the prerequisites.

Mr Thanathorn said on Friday evening that Future Forward would be reborn as a “movement” and vowed to continue pursuing a reform agenda outside Parliament.

The court decision means 65 Future Forward MPs must find a new party within 60 days. Ten list seats held by now-banned party executives will also have to be reallocated. It is not clear whether the EC will allow candidates on the FFP party list to replace those 10. If it doesn't, the Opposition would have 229 votes, far short of a majority ahead of next week’s no-confidence debate.

Both coalition and opposition parties are expected to woo the Future Forward refugees, but the party said earlier that a new party would be ready to accommodate those who wanted to pursue the same political path. Details are not known.

Friday’s decision also takes away a lot of the firepower that the opposition was preparing to direct at key coalition figures including Prime Minister Prayut Chan-o-cha in the censure debate.

The court, which took less than an hour to read the ruling on Friday afternoon, began by ruling that the Election Commission was empowered to take action when an offence is flagrant, without having to wait for anyone to ask it to do so or letting the offender know the charge first, since its procedures are different from those of a court. (continued below) 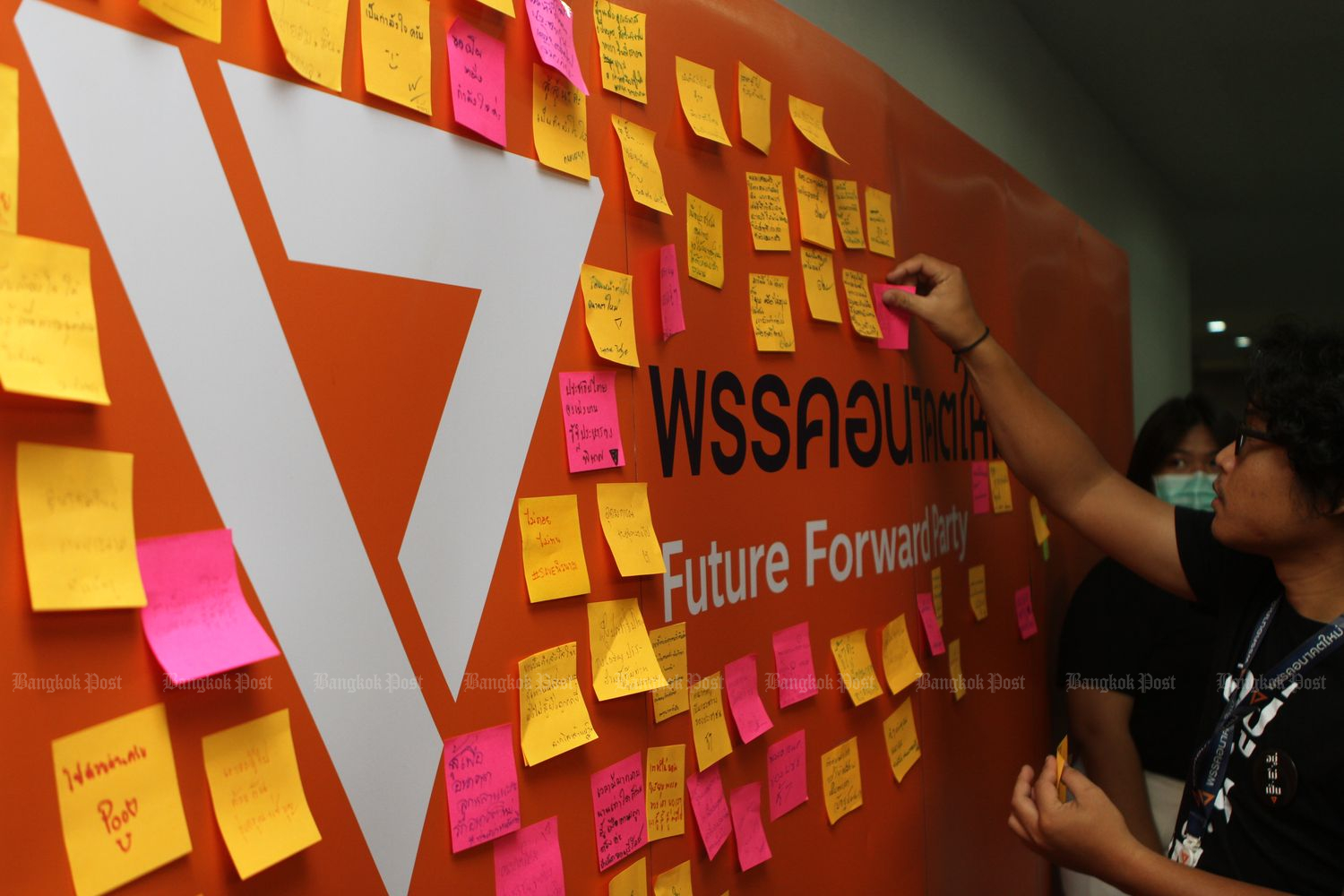 Supporters write notes at the Future Forward headquarters in Bangkok on Friday. (Photo by Chanat Katanyu)

The explanation appeared to negate the party’s earlier argument that it had not been informed the EC would charge it under Section 92 for receiving gains from illegitimate sources, the penalty for which is party dissolution.

The judges went on to explain the intention of several laws that limit the sources of income a party can receive.

It said the intention is to prevent anyone with a financial advantage from wielding influence on or controlling a party.

FFP and others maintained that a loan is not a donation, but the court decided otherwise. It said a political party is a juristic person under public law, so what is not allowed in the law is prohibited.

The party had argued that a party is a private juristic person, not a juristic person under public law or state agency that must be set up by law. As a result, the rule of “everything that is not prohibited is allowed” applies to it, unlike the concept of “everything that is not allowed is forbidden” applicable to public authorities — a concept enshrined in law to limit the power of the state.

The court said that since the party accepted income from sources other than those listed under Section 66 on donations, the party executives should have known it was “other income”, which could give the donor undue influence on the party.

The court also noted iregularities in the lending. It noted interest rates were lower than market rates, and a second loan was extended even when the party had yet to repay the first. Besides, the party borrowed the second loan even though it was only 1 million baht in the red on its balance sheet.

In the court’s view, these actions indicate it was not normal borrowing and was more an attempt to evade the limit on donations under Section 66 at the expense of other parties.

After establishing that the party and its executives violated the donations limit, the court concluded the money was from an illegitimate source under Section 94, the violation of which leads to party dissolution.

The party and academics had said earlier that the real spirit and intent of Section 94 was to prevent parties from using ill-gotten gains such as from robberies, human or drug trafficking. (continued below) 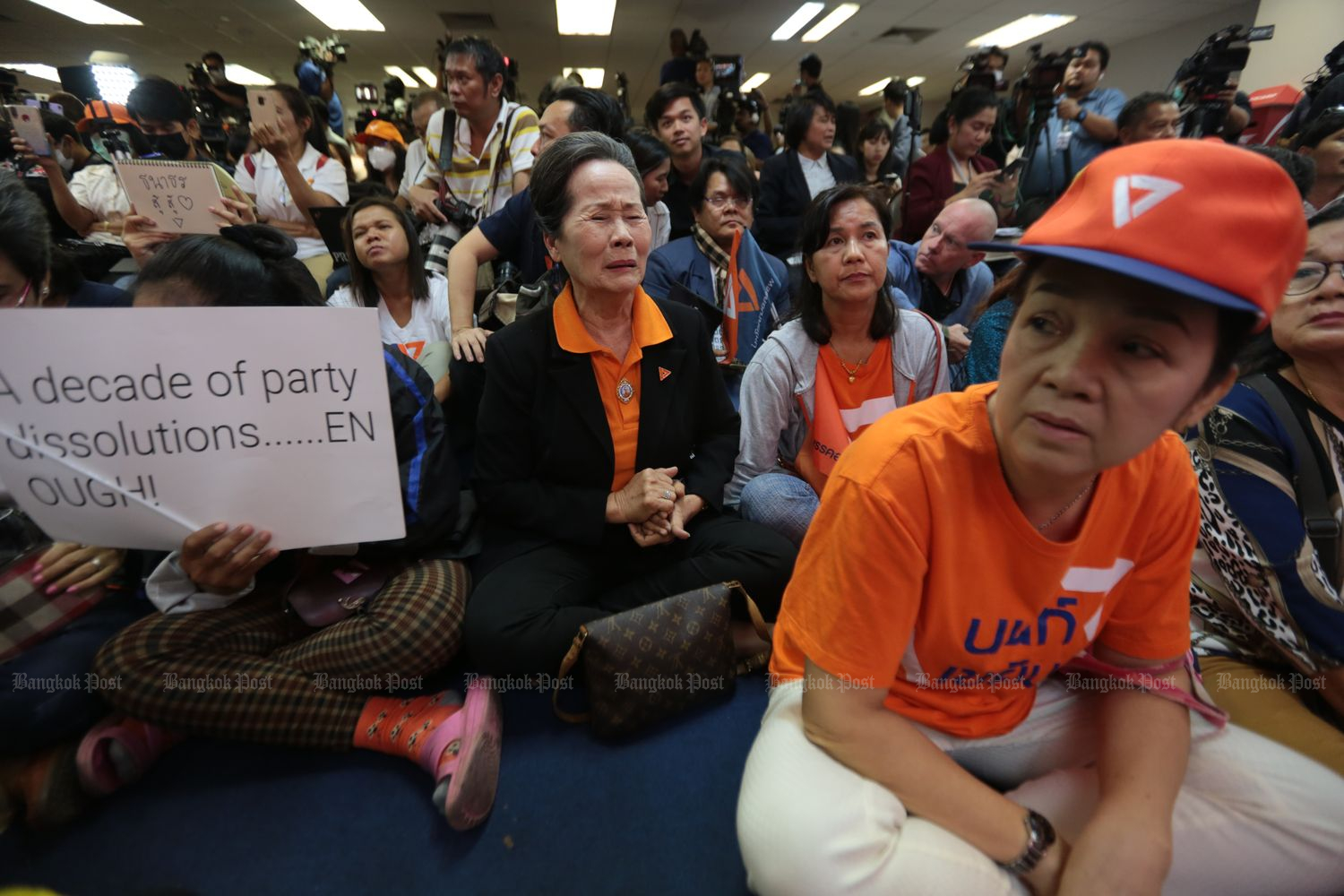 Supporters gather to hear the ruling at the Future Forward head office in Bangkok on Friday. (Photo by Chanat Katanyu)

Mr Thanathorn and Mr Piyabutr said before Friday’s ruling that they had a party with the same ideals ready for the 70 MPs to join in the event of an unfavourable outcome. They themselves plan to travel the country promoting the same agenda as they did before the party was disbanded.

“If they dissolve our party, there will be two paths running in parallel — one is a new party in parliament, running under a new name but the same ideology and the second is a social movement run by me and Piyabutr,” Mr Thanathorn told Southeast Asia Globe in an interview.

Since the enactment of Thailand’s first political parties law in 1998, the Constitutional Court has disbanded 110 parties, including FFP on Friday. In the first nine years, the dissolved parties were found to have violated the law based on technical issues. The first major case that had politicial repercussions was the disbandment of Thai Rak Thai party led by Thaksin Shinawatra in 2007.

The Future Forward Party was 16 months and 18 days old on the day it was dissolved. With 6.3 million votes in the March 24 election last year, it was the third-largest party and on course for 88 MPs.

But it ended up with 81 MPs after the EC changed the party list calculation formula to give more seats to microparties, all of which joined the governing coalition. By the time it was dissolved, FFP had 77 MPs, 61,864 members and 13.8 million baht in membership fees, according to data posted on its Facebook page.