Thanathorn to intensify work outside Parliament

Leader Thanathorn Jungroongruangkit and secretary-general Piyabutr Saengkanokkul address a news conference after the Future Forward Party was dissolved by the Constitutional Court on Friday. (Photo by Chanat Katanyu)

Thanathorn Jungroongruangkit has apologised to supporters for failing to lead the Future Forward Party (FFP) to achieve its mission, but has vowed to step up a campaign for reform outside Parliament

“I would like to apologise for failing to deliver on our promises,” he said at an emotional news conference held after the party he co-founded 16 months ago was dissolved in a ruling by the Constitutional Court.

The FFP pledged prior to the election in March last year to end the power of the military regime and the military-backed government. It also campaigned to replace the junta-backed Constitution and reform the armed forces. 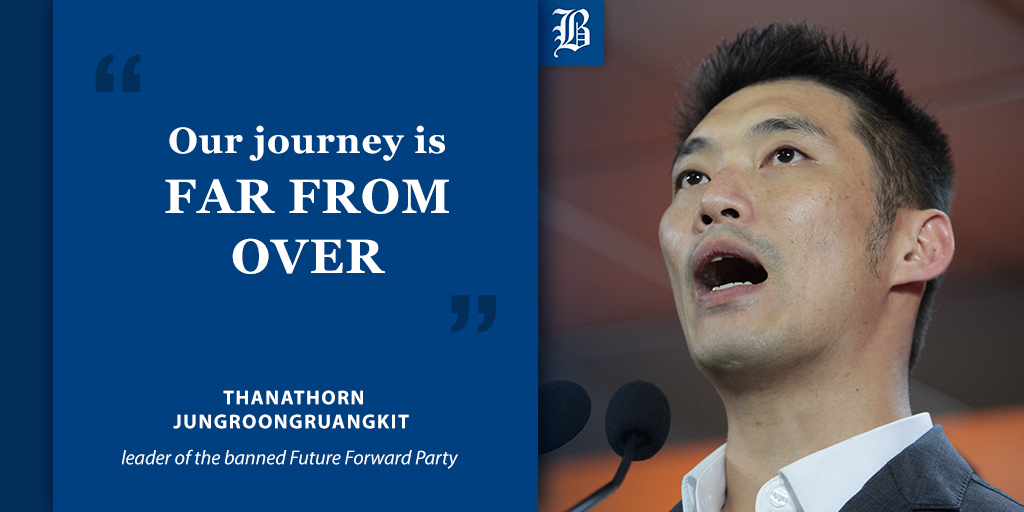 The party may be dead — the word “party” was crossed out on its logo on all social media — but its mission will continue in a new form.

Mr Thanathorn announced the establishment of the Future Forward Movement to resume its political mission outside Parliament. He said he would use his own money to set up a foundation to mainly promote better education and a healthier environment.

“Our journey is far from over,” he said.

The charter court voted 7-2 on Friday afternoon to dissolve the party and banned 16 of its executives from politics for 10 years for accepting a loan of 191.3 million baht, which it deemed an “illegitimate” source of funds.

Former FFP secretary-general Piyabutr Saengkanokkul warned of deepening political conflicts in the society as a result of the court ruling and vowed to intensify political activities with Mr Thanathorn.

“Thanathorn and I will tirelessly continue political campaigns across the country,” the law professor said, calling the court ruling a “political death sentence”. 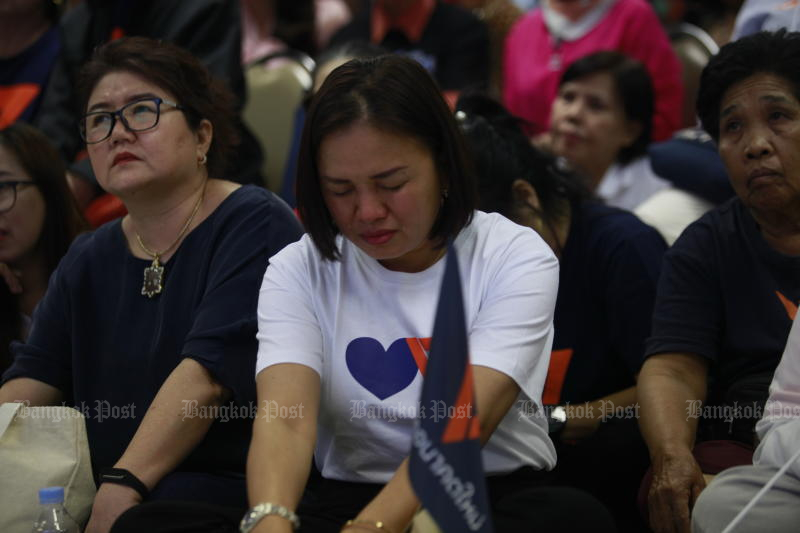 MPs under the FFP banner now have 60 days to find a new party, amid speculation that one will be formed to keep them under a new umbrella with rising-star MP Pita Limjaroenrat as a potential leadership candidate.

Mr Thanathorn, who has 29 court cases lodged against him and his party, told supporters “don’t give up, don’t stop the dream”.

Mr Pita, who was not the FFP executive member, told a news conference that MPs in Parliament would not throw in the towel and would move on in a “new vehicle”.

“I may have failed this time but we will not give up,” he said.

A large crowd began gathering on Friday evening in front of the FFP headquarters at the Thai Summit building — the family-owned auto parts company is the source of Mr Thanathorn’s wealth — after messages spread online that there would be a rally.

Many cheered and gave three-finger salutes as speakers called for the campaign against the military-dominated government and establishment to continue.

“I don’t understand why they are doing this. Do they want people to come out onto the street?” one disconsolate FFP supporter told AFP, requesting anonymity.

“I believe that people who choose the Future Forward Party will be able to find other mechanisms to inspect the work of the government,” he said in a post on his Facebook page.