A protest leader goes up a stage at a corner of the Democracy Monument on Ratchadamnoen Avenue on Wednesday morning, as demonstators form a cordon around the platform. (Photo: Jetjaras Na Ranong)

Protesters began gathering at the Democracy Monument on Ratchadamnoen Avenue in Bangkok on Wednesday morning, led by Arnon Nampha, a core member of the People's Group.

This followed an announcement that the demonstration earlier planned to start at 2pm had been moved up to 8am after 21 protesters were arrested near the Democracy Monument and Satriwithaya School on Tuesday night.

The 21 were being detained at Border Patrol Police Region 1 headquarters in adjacent Pathum Thani province. (continues below)

After the arrests, a group of protesters led by Parit "Penguin" Chiwarak, gathered in front of the Royal Thai Police Office and demanded their immediate release.

Police did not respond. Mr Parit then declared that the demonstration would be moved up to 8am on Wednesday, instead of 2pm.

Protesters from within Bangkok and elsewhere began to arrive at the Democracy Monument about 7.30am. They gathered in front of a McDonald's restaurant.

Shortly afterwards, they were joined by more protesters, who arrived in seven vans from Chiang Mai.

At 8.40am, Mr Arnon went up a stage and told them to wait for more people to arrive, until 2pm.  He told them to remain peaceful and refrain from violence, and not to clash with any other groups.

He said the McDonald's side of the road would be closed at 2pm, allowing the traffic to flow on the other side.

"Nobody can order us to open the road. It will be opened only for ambulances," Mr Arnon announced.

When an expected royal motorcade passes the spot, the protesters would announce their demands and raise their arms in a three-finger salue.

A motorcade of His Majesty the King will reportedly pass the avenue heading for the Temple of the Emerald Buddha for a graduation ceremony of Pali scholars on Wednesday.

Mr Arnon said if the 21 were granted bail and released, they would immediately join them at the demonstration site.

And when everything was ready, the protesters would move to Government House to demand Prime Minister Prayut Chan-o-cha's resignation, he said.

An armoured riot control truck with water cannons was reportedly positioned on one side of Phitsanulok road, behind the Metropolitan Police Bureau headquarters.

The truck would normally contain 12,000 litres of water which could be fired out to 65 metres. The water can be mixed with a colouring, to mark people who are hit by the spray. 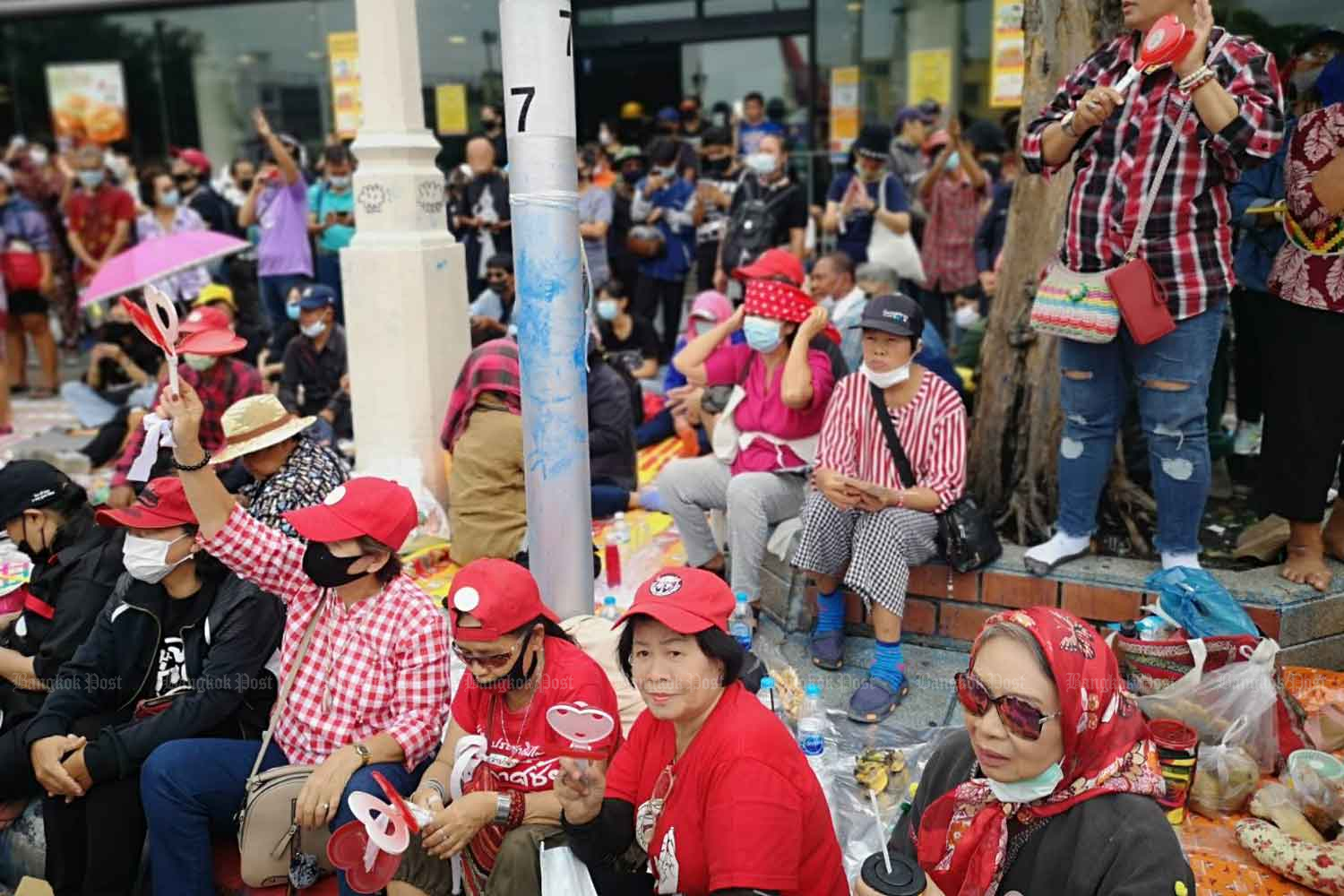 Protesters converge in front of the McDonald's restaurant near the Democracy Monument on Wednesday morning. (Photo: Jetjaras Na Ranong)