Anti-government demonstrators set up camp outside Government House after marching for about 10 hours to get there. Protest leaders vowed to stay put until Gen Prayut Chan-o-cha steps down as prime minister and a new constitution is drafted. (Photo by Pattarapong Chatpattarasill)

Anti-government protesters have besieged Government House and threatened to camp out there until Prime Minister Prayut Chan-o-cha bows to one of their demands and quits.

Their sit-in has scuppered the government's plan to receive Chinese Foreign Minister Wang Yi at Government House Thursday -- he will probably be welcomed at the Defence Ministry or Ban Phitsanulok instead. Mr Wang is visiting the kingdom to bolster cooperation between the two countries and will meet the PM Thursday.

Pro-democracy protest leaders announced last night that they would camp out in front of Government House until Gen Prayut resigns. Their two other key demands are for parliament to hold an urgent special session to deliberate charter amendments and reform of the monarchy.

After more than 10 hours of marching which was occasionally blocked by police, the anti-government protesters set up camp on Phitsanulok Road outside Government House Wednesday evening as police gave up trying to stop them.

The number of protesters was estimated at 20,000, according to journalists covering the event. During the day the protesters occupied Phitsanulok Road from the Misakawan intersection and Chamai Maruchet Bridge all the way to Nang Loeng intersection. 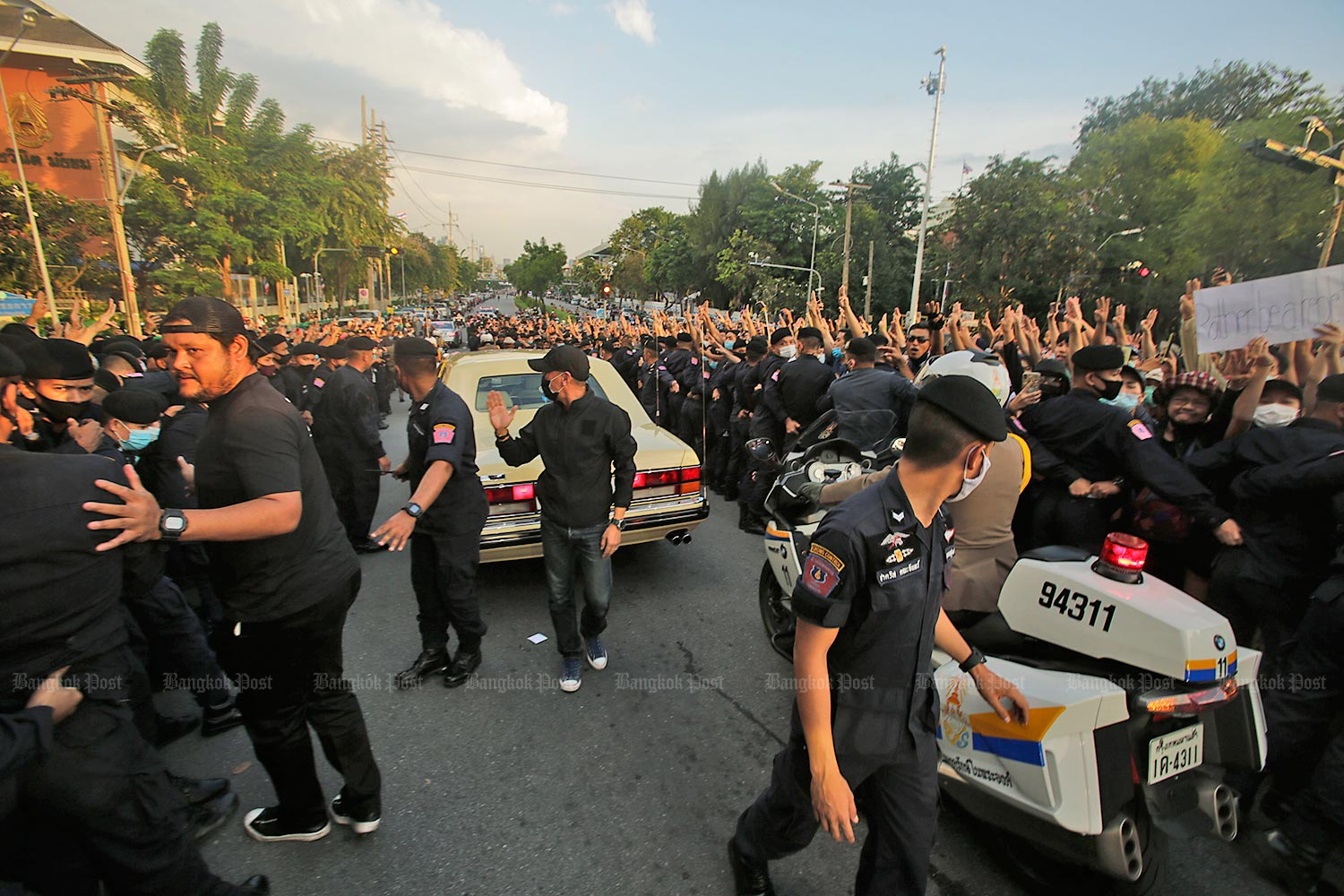 The royal motorcade of Her Majesty the Queen drives down Phitsanulok Road as security officers try to stop protesters flashing three-finger salutes. Her Majesty, representing His Majesty the King, was heading to a temple in Chom Thong district to offer robes to monks as part of a ‘kathin’ ceremony. She was accompanied by HRH Prince Dipangkorn Rasmijoti. (Photo by Pornprom Satrabhaya)

Police declared they would not allow the protesters to enter the nearby Royal Plaza and, as the Bangkok Post was going to press last night, they were still ordering protesters through loudspeakers to head home by 10pm in order to comply with the public assembly law. The police did not spell out what they would do if the protesters remained where they were.

One of the protest leaders, Parit -- aka "Penguin" Chiwarak -- claimed at least 200,000 people had attended the rally, despite police estimates that only 8,000 people had turned up.

More than 14,000 police officers were deployed to maintain order.

The demonstration was organised by the "Khana Ratsadorn" (the People's Group), formerly known as the Free People movement.

This followed an announcement that the demonstration earlier planned to start at 2pm had been moved up to 8am following the arrest of 21 protesters near the Democracy Monument and Satriwithaya School on Tuesday afternoon.

The group began marching to Government House to press their three key demands -- the departure of Gen Prayut, a new constitution and monarchy reform -- but were halted by police barricades.

"Down with dictatorship. Long live democracy," the marchers chanted as they left Democracy Monument, where they had assembled. and came face to face with thousands of yellow-clad royalists.

The protesters walked from the Democracy Monument to Government House via Nakhon Sawan Road as security authorities blocked them from marching down Ratchadamneon Nok Avenue, which was being prepared for Wednesday's royal motorcade.

Mr Arnon and other protest leaders promised there would be no violence during the rally.

Yellow-clad people had gathered along Ratchadamnoen Avenue, waiting for the motorcade of His Majesty the King, who was scheduled to go to the Temple of the Emerald Buddha inside the Grand Palace in the afternoon for the graduation ceremony of monks and novices who had completed Pali studies.

The yellow-clad royalists dispersed after the royal motorcade had passed.

The protesters were blocked by four police buses at the end of Nakhon Sawan Road and those in the front line started trying to push one of the buses out of the way. Their leaders told them to stop and to show restraint.

They then sat down along Nakhon Sawan Road and waited for their leaders' next move. Police later removed the buses and allowed them to move on to the Nang Loeng intersection,.

About the same time, the royal motorcade of Her Majesty the Queen passed along Phitsanulok Road, which was cordoned off by security officers to stop protesters. Their only gesture was to defiantly flash the three-finger salute as the motorcade passed.

Her Majesty, representing His Majesty the King and accompanied by His Royal Highness Prince Dipangkorn Rasmijoti, was to offer robes to monks as part of a kathin ceremony at Wat Arun Ratchawararam and Wat Ratcha Orasaram.

Deputy police spokesman Pol Col Kissana Phathanacharoen said Wednesday that police would try to contain the protesters, whose numbers he estimated at 8,000.

Pol Col Kissana urged the public to avoid the routes occupied by the protesters, whom he urged to comply with the law and not violate other people's rights.

Suthep Thaugsuban, former protest leader of the now-defunct People's Democratic Reform Committee, was among the yellow-clad people who waited for the royal motorcade of His Majesty the King.

He said he joined other Thais to show loyalty to the monarchy, but denied mobilising yellow-clad supporters to counter the anti-government protesters.