We will never surrender ... say both sides
Thailand
Politics

We will never surrender ... say both sides

Anti-government protesters march on Ratchadamnoen Avenue as they head from Democracy Monument to Government House yesterday. (Photos by Wichan Charoenkiatpakul)

Anti-government protesters have vowed to keep fighting until their demands for greater democracy and less power for the monarchy are fulfilled, while pro-monarchy groups have also pledged to protect the country's highest institution they love and admire.

The anti-government protesters began gathering on Wednesday morning at Democracy Monument on Ratchadamnoen Avenue. The pre-planned start time of the 2pm event was pushed up to 8am after 21 protesters were arrested on Tuesday.

"I'm here today because what happened to Pai Daodin [activist Jatupat Boonpatararaksa] and his friends is unacceptable: to arrest people without a warrant or reading them their charges. To disperse a rally without a court order," said a 21-year-old protester, who declined to provide his name.

The man said he was well aware of the risks involved, since several pro-democracy activists had already been charged with serious offences including sedition, which carries up to seven years in prison. He also acknowledged the risks had risen even higher due to them raising the taboo topic of the monarchy. 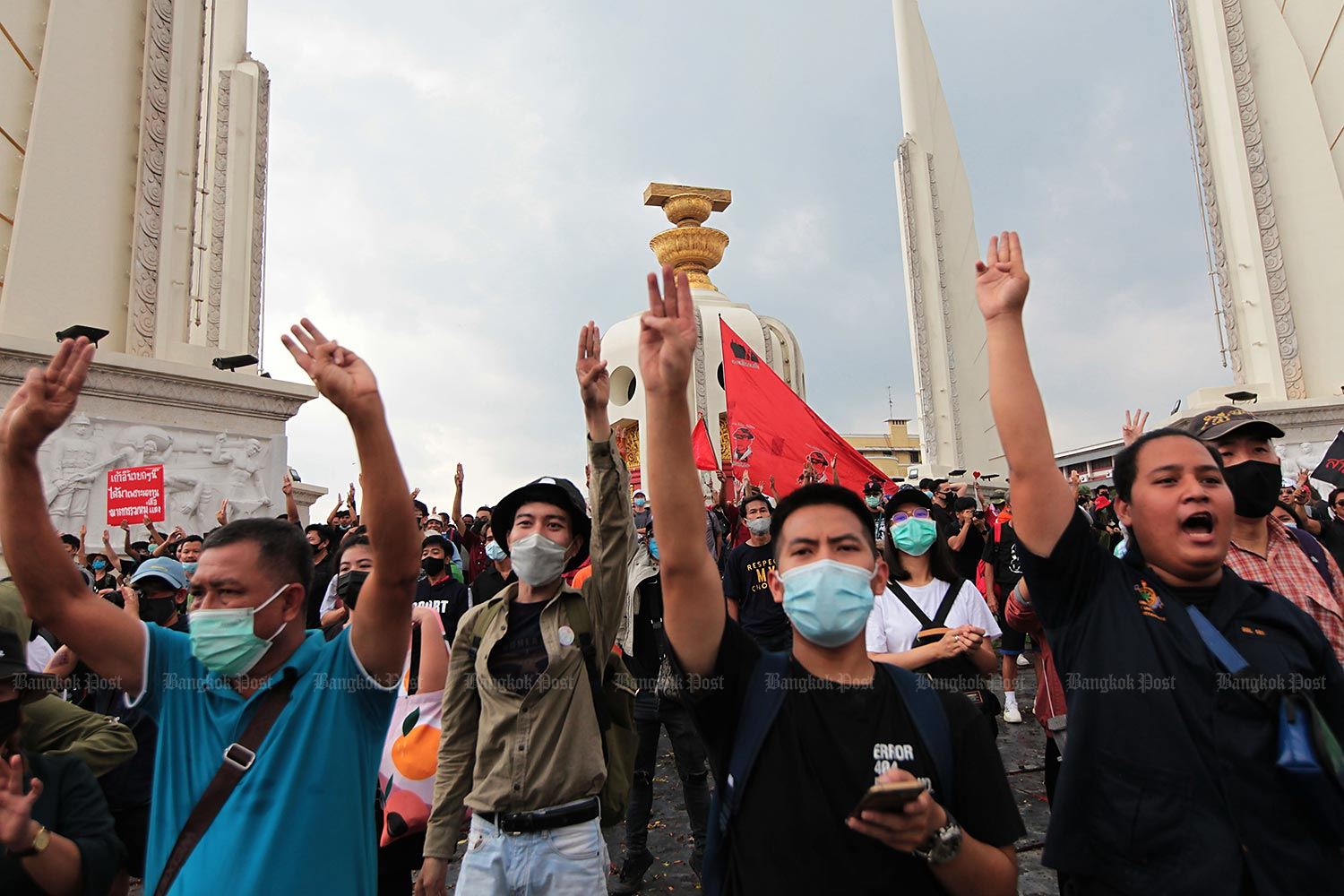 Many flash a three-finger salute as they surround Democracy Monument before setting off for Government House.

"Speaking up is costing us a lot of things in this country," he said. "Brave activists and students who have come forward to voice their rightful criticism of the government and the monarchy have faced dire consequences.

"Some have been threatened, some attacked and some were forced to disappear. I can't just stand still anymore, I want all of these weird things to end in my generation."

Another 20-year-old protester who identified herself as "June" said she went because she really wanted to see changes and could no longer tolerate the injustice and dysfunctional democracy in this country.

"There are many questions which need to be answered," she said.

A high school student, who asked not to be named because her parents fear for her safety, said she and her friends had not told their parents they were attending the protest and had skipped exams on Wednesday morning to be there.

"We want to express our stance and voice support for their [three] demands," the teenager said. 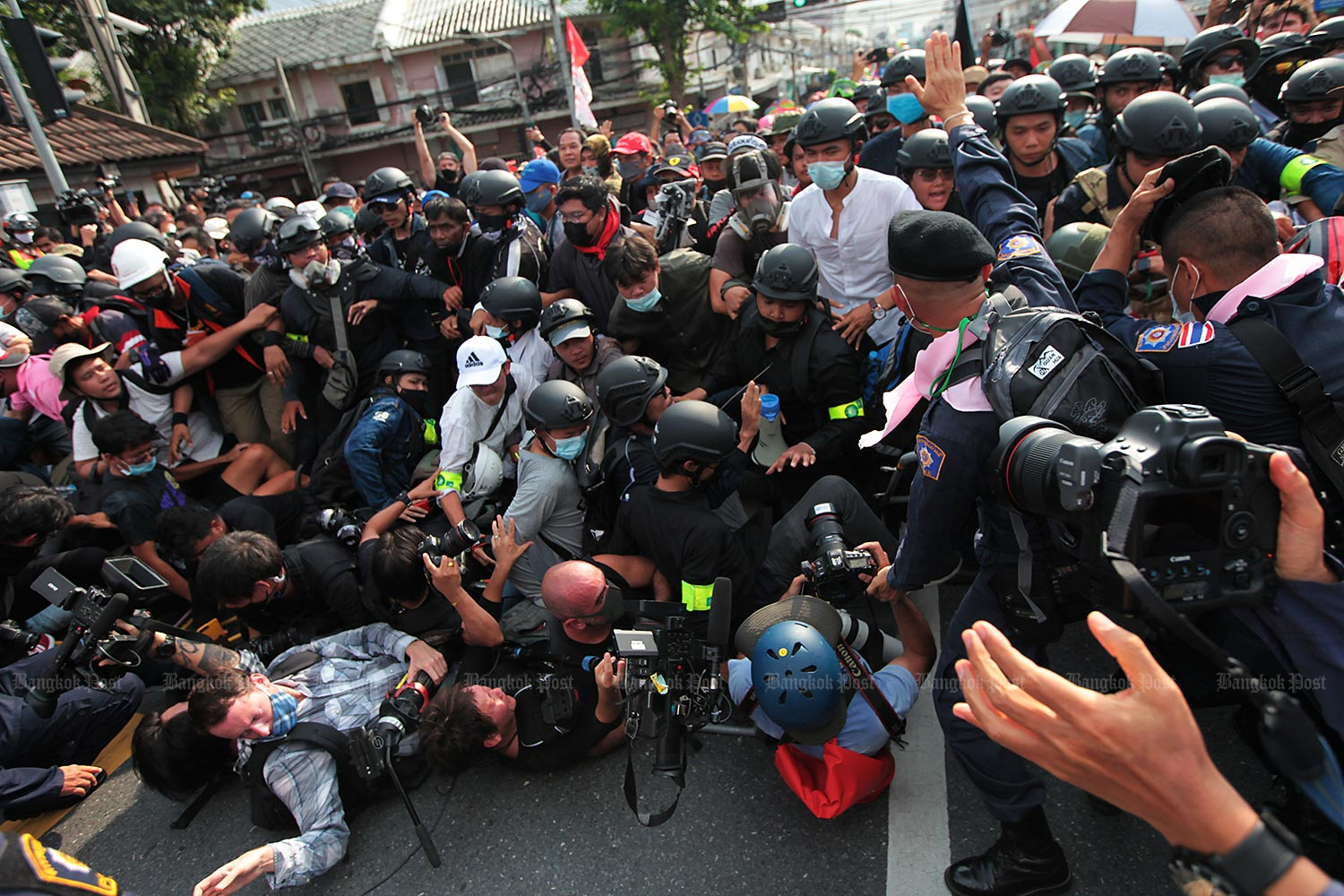 Media crew fall over on a road during a scuffle at the protest. 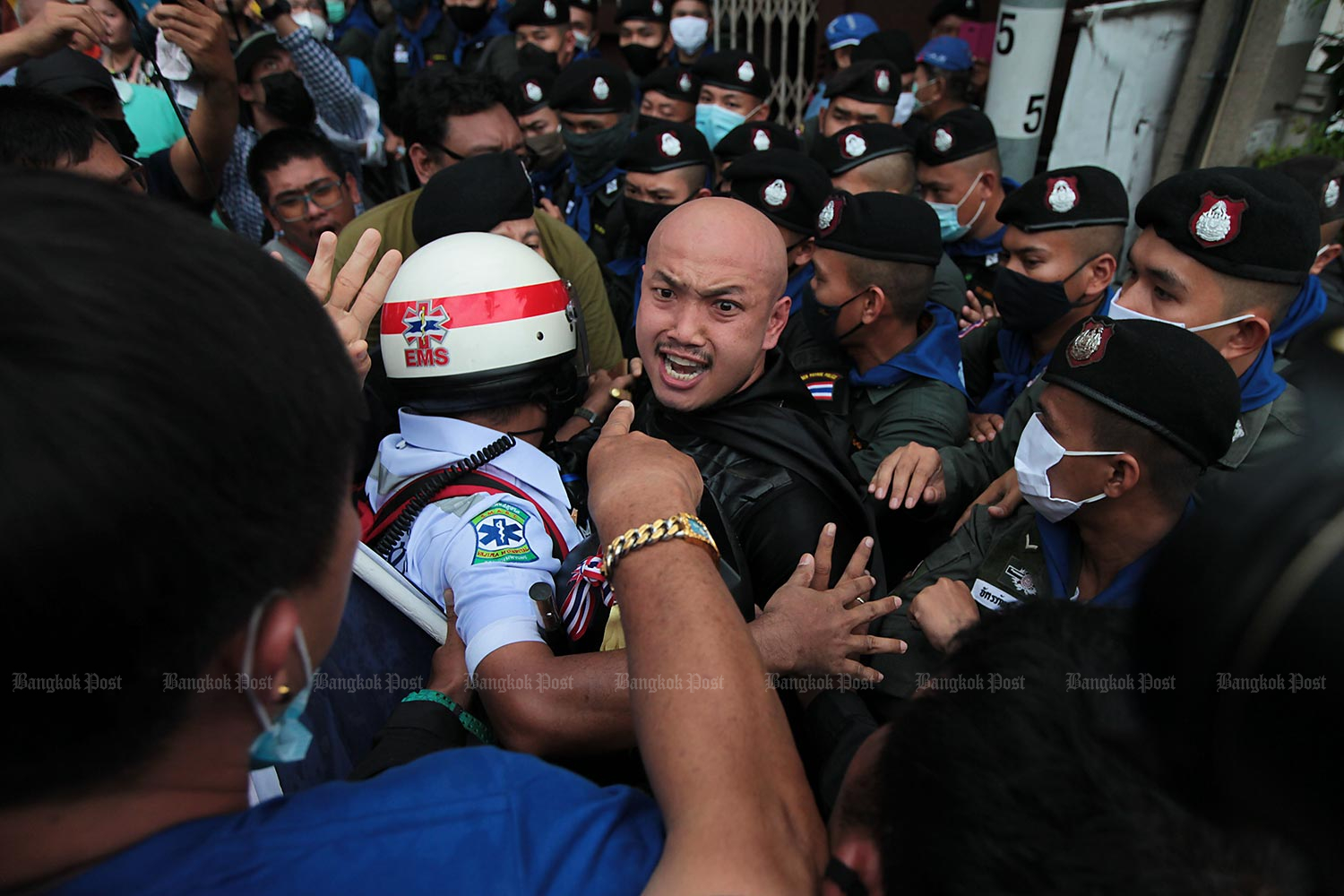 Tempers flare as police officers try to keep apart two men who confronted each other during the protest.

She said protesting students shared the same aspirations for democracy as those in the Oct 14, 1973 uprising, but insisted this one would not end in violence.

She said democracy should be a system in which everybody is equal but what remains undemocratic is the kneeling culture used to show respect and the 250 military-appointed senators.

Another university student, who asked not to be named, echoed those views and added that democracy should foster fundamental human rights and freedoms, but what had undermined Thailand's democracy was the opaqueness surrounding last year's election, especially those of the senators.

A group of university students said they had decided to skip their classes to join the protest because they wanted to see Thailand transformed into a real democracy.

"We are sick and tired of living under a repressive regime," one of the group said. "We need real political change in order to transform this country.

"We want to live in a society where people can truly enjoy their freedom, their liberties and equality. There are problems that must be solved. If we do not tackle the structural issues, the chronic issues will persist."

Another high school student said he had travelled from Prachuap Khiri Khan by hitching a free ride organised by yellow-shirt [pro-monarchy] protesters. The moment he arrived he took off his yellow shirt to reveal the black one underneath.

"I am joining forces today to show the power of the masses," he said. 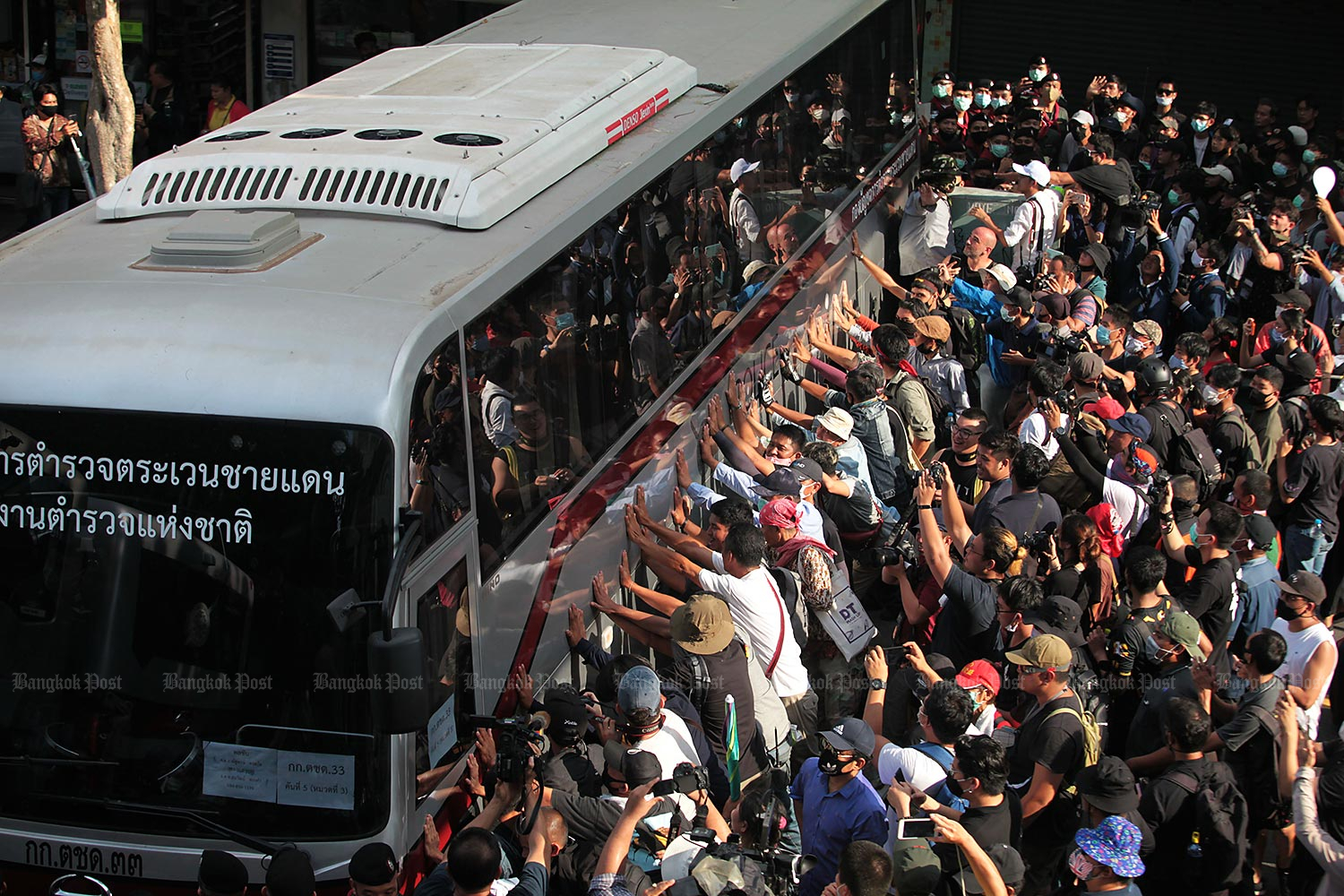 Protesters shove the side of a bus which police had parked on a road in the Nang Loeng area to keep them from getting to Government House.

Every anti-government protester told the Bangkok Post they would keep fighting until their demands for greater democracy and less power for the constitutional monarchy established by Khana Ratsadon in 1932 had been fulfilled.

Anti-government protests have taken place throughout the country for the past three months -- protesters are demanding the removal of the Prayut Chan-o-cha government, a rewriting of the military-drafted constitution and reform of the monarchy.

As anti-government demonstrators occupied a section of Ratchadamdoen Avenue on one side of the Democracy Monument, people wearing yellow shirts massed on the opposite side.

Those attending Wednesday's anti-government rally were mainly young students, unlike the crowd on Sunday, which appeared to be overwhelmingly retirees.

Groups of yellow-clad people also gathered at spots along the avenue towards Government House and waited for the motorcade of His Majesty the King, who was to preside over a graduation ceremony of Pali scholars at the Temple of the Emerald Buddha.

Many of them vowed to protect the monarchy with their lives.

"I don't care if you talk about politics. You can protest about the government -- go ahead and do so but do not touch the monarchy. I cannot let that happen and I will protect the monarchy with my life," said Jamnong Hongthong, a 78-year-old retiree from Nonthaburi. 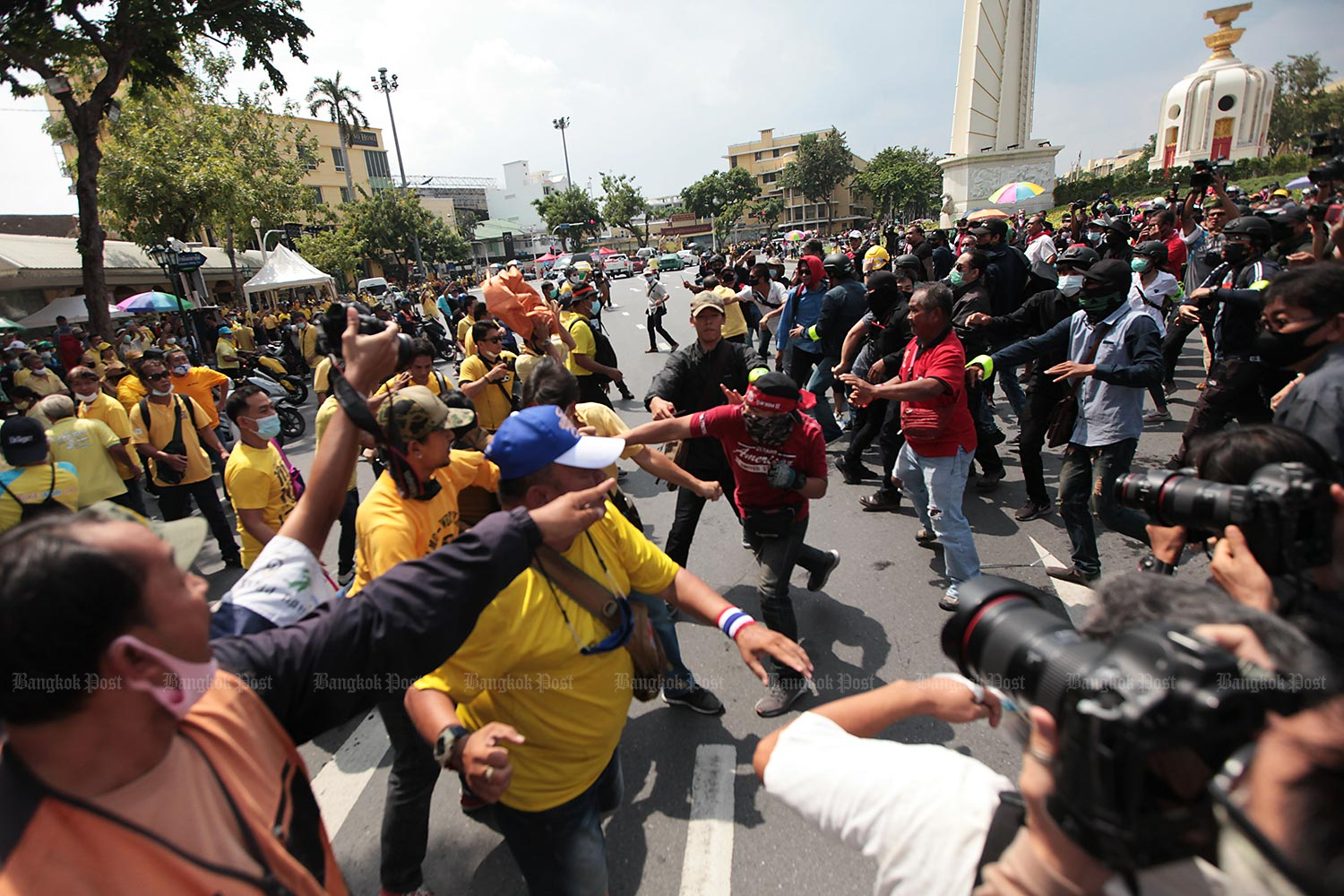 Yellow-clad people and anti-government protesters clash near Democracy Monument where both sides had gathered.

Mr Jamnong said about 600 people from his village had voluntarily travelled just to welcome the royal motorcade.

"We have not been paid. We have come here by ourselves. If I can say something to the anti-government groups, I want them to stop attacking the highest institution," he said.

Another royalist, Suchart Boonkerd, 76, from Chon Buri, said he considered the demands of anti-government groups inappropriate and that the monarchy held a cherished and sacred place in Thai society.

He said the students were overstepping their bounds.

"I believe the youth are manipulated by some people who want to destroy our country," he said. "These people criticise and defame the monarchy and spread misinformation with baseless facts. The younger generations need to learn that the monarchy has done many things for us in the past. They need to be educated about these facts."

Sornsiri Prempreeda, 73, from Lop Buri, said he could accept evolution of society -- but not revolution, as the protesters wanted.

"I don't mind if you want to chase the government out but I won't put up with your insolence towards the institution," he said.