City Hall workers clean Phitsanulok and other roads outside Government House after the anti-government demonstration ended on Thursday. (Photo by Nutthawat Wicheanbut)

The government banned gatherings of five or more people and the publication of news or online messages that could harm national security early on Thursday under an emergency decree to end Bangkok street protests.

Protests have escalated for three months and protesters set up camp outside Government Houseto demand his resignation late on Wednesday. The government said it also acted after demonstrators obstructed a royal motorcade. 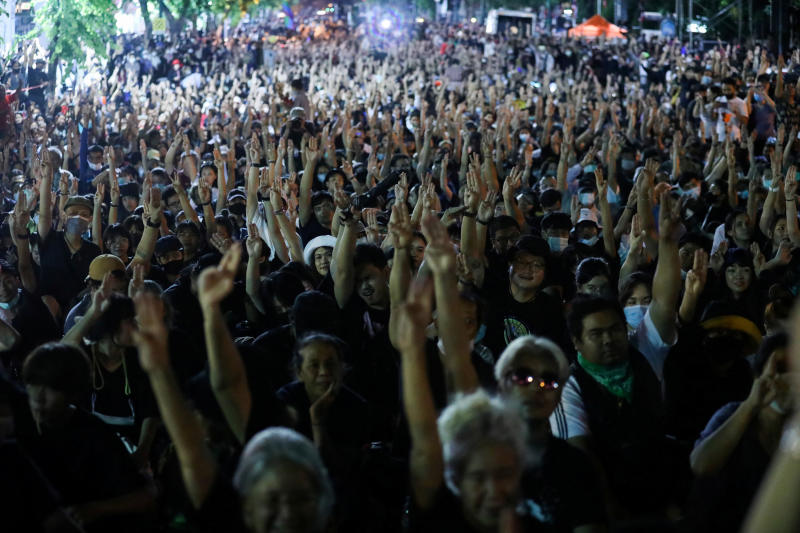 Demonstrators flash the three-fingers salute as they gather outside Government House on Wednesday. (Reuters photo)

"It is extremely necessary to introduce an urgent measure to end this situation effectively and promptly to maintain peace and order," state television announced.

It was accompanied by a document setting out measures that took effect from 4am to ban big gatherings and allowing authorities to ban people from entering any area they designation.

It also prohibits: "publication of news, other media, and electronic information that contains messages that could create fear or intentionally distort information, creating misunderstanding that will affect national security or peace and order."

Shortly after the emergency decree took affect, riot police advanced behind shields on protesters who had camped outside Government House. Many of the thousands who had protested there late on Wednesday had already left.

The areas around Government House are cleared for traffic after the rally ended. #BangkokPost #Thailand #politics pic.twitter.com/XxMxUrz83v

Some protesters tried to resist with makeshift barricades of garbage cans, but they were swiftly pushed back. By dawn, hundreds of police occupied the nearby streets and city workers began cleaning up.

At least three of the protest leaders were arrested, Thai Lawyers for Human Rights said. Police made no immediate comment.

Thai Lawyers for Human Rights said that three protest leaders had been arrested. It named them as Parit Chirawat, human rights lawyer Arnon Nampha and Panupong Jadnok. It said Mr Arnon had been arrested on charges related to a speech he gave in Chiang Mai. It said it did not know the grounds for the other arrests.

About 10,000 protesters marched in Bangkok on Wednesday.

The protest movement aims to remove Gen Prayut, who took power in a 2014 coup that was meant to end a decade of violence between supporters and opponents of the country's establishment.

Those marching on the streets also want a new constitution and have called for reform of the monarchy.