A view of the rally at Kasetsart intersection in Bangkok on Monday. (Photo by Varuth Hirunyatheb)

A large crowd of mostly young people gathered at Kasetsart intersection in Bangkok, one of the three locations where rallies were held in the capital on Monday, before dispersing peacefully at 7.15pm.

The three sites were the area in front of the Bangkok Remand Prison where their leaders are detained; Kasetsart intersection; and the MRT’s Public Health Ministry station in Nonthaburi, according to a post on Free Youth Facebook at 3.40pm.

Shrtly after, the BTS skytrain announced it would not stop at three stations — Sena Nikom, Kasetsart University and Forestry Department — from 5.30pm. It reopened at 7.30pm.

In Nakhon Pathom, a protest was held at Silpakorn University Sanam Chan campus at 5pm.

In the North, the rally site was the Three Kings Monument in Chiang Mai (4.30pm to 9pm).

In the South, demonstrators are instructed to meet at the clock tower in Hat Yai, Songkhla province.

They had four demands: their friends must be released; Prime Minister Prayut Chan-o-cha must resign; Parliament must consider people's constitution amendment bill (iLaw); and the monarchy reform.

Also on Monday, pupils at at least two prominent schools in Bangkok — Satriwit and Debsirin — resumed their display of a three-fingered salute after showing their respects to the national flag in solidarity with the demonstrators. A Debsirin student was reportedly hurt during the Pathumwan crackdown where a water cannon and water laced with unknown chemicals was used. 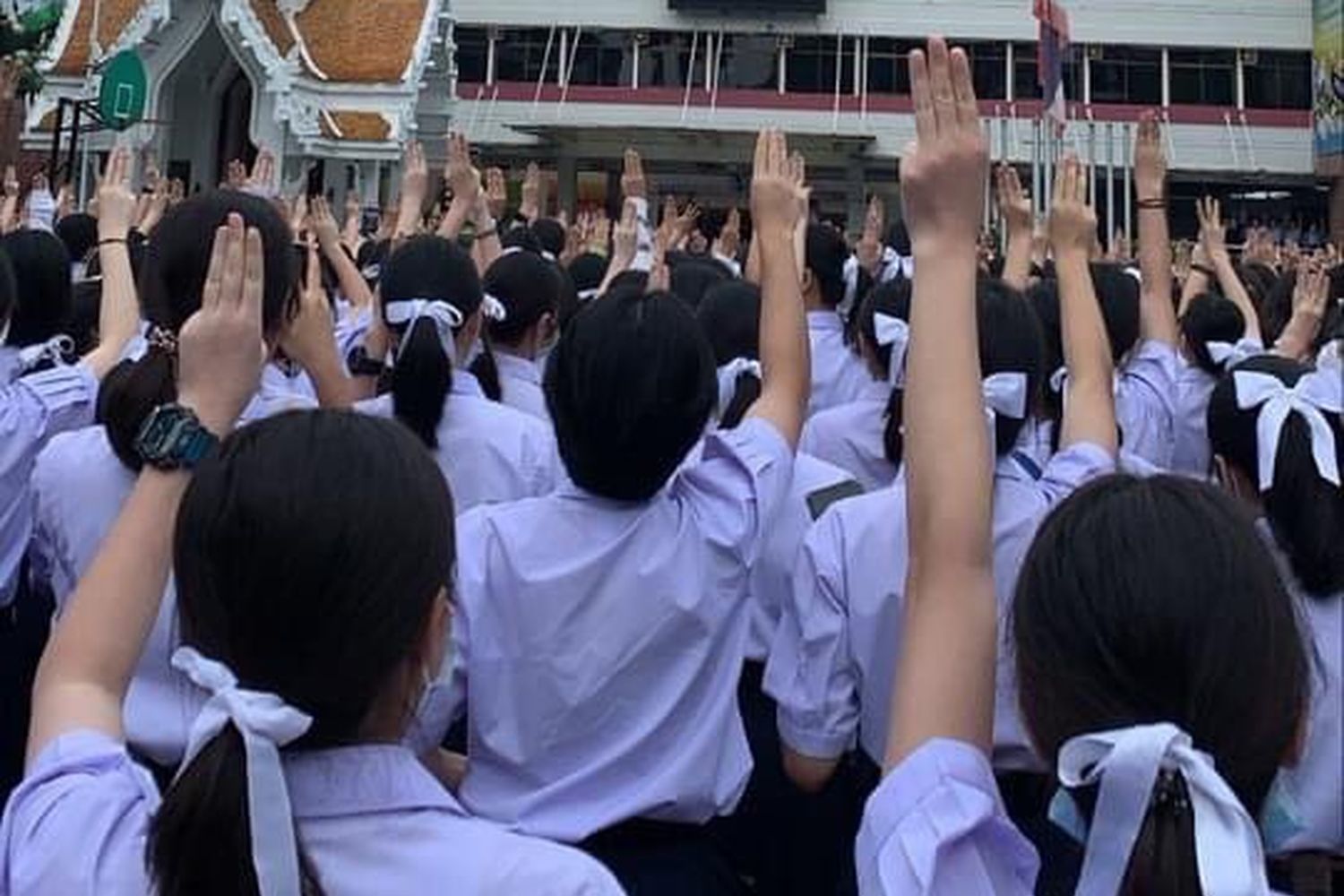 Pupiles at all-girl Satreewitthaya School flash a three-fingered salute, the symbol of the rallies, before class on Monday. (Photo supplied by Thana Boonlert)

Leaderless protests have continued nationwide for the third consecutive day after a crackdown in Pathumwan, Bangkok, on Friday, even though their leaders had been arrested.

Protesters have been relying on messaging apps to arrange rallies at several sites in a few hours before they take place. This tactic proves a challenge for police, who are steps behind, and makes it hard for them to attempt another crackdown.

The police came up with the idea of blocking popular messaging apps in the hopes of breaking their communication channel. Protesters, however, were quick to join a new group on locally lesser-known Telegram.

In a letter marked highly confidential leaked to media, the Digital Economy Ministry, by the authority of the serious state of emergency decree, on Monday asked all internet service providers and mobile operators to block the app.

It remains to be seen how Thai operators can achieve that. In June, Moscow lifted a ban on the app after two years of unsuccessful attempts to block it.

In addition to the order, the Digital Economy Ministry said it had sought a court order to ban four online news outlets and a website, citing an order by a newly established centre handling the serious state of emergency.

They are VoiceTV, Prachatai, The Reporters and The Standard, which have been reporting live from the rally sites. The banned website belonged to Free Youth.

If approved, authorities can search equipment, stop its programmes and seize the equipment immediately.