Protesters give Prayut 3 days to step down

Prime Minister Prayut Chan-o-cha on Wednesday night suggested everyone take a step back in the conflict between the government and anti-government movement.

The premier offered to lift the state of emergency but asked his opponents to reciprocate by toning down their hateful and divisive speeches.

"I will make the first move to de-escalate this situation. I am currently preparing to lift the state of severe emergency in Bangkok and will do so promptly if there are no violent incidents," he said in a TV broadcast Wednesday night.

"I ask the protesters to reciprocate with sincerity, to turn down the volume on hateful and divisive talk," he said.

"Let us respect the law and parliamentary democracy, and let our views be presented through our representatives in parliament," said Gen Prayut, referring to the cabinet's decision to support a proposal to convene a special parliamentary session to discuss ways to defuse the ongoing political conflict.

The PM said that as leader of the government he was responsible for reconciling opposing views, especially extremist ones, so that people could live peacefully together in a country that belonged to everyone.

An ideal solution to the current conflict would be one that was fair for not only those taking to the streets but also those many million others who chose not to join the protests, he said.

"Now that the protesters have made their voices and views heard, it is time for them to let their views be reconciled with the views of other segments of Thai society through their representatives in parliament," he said. 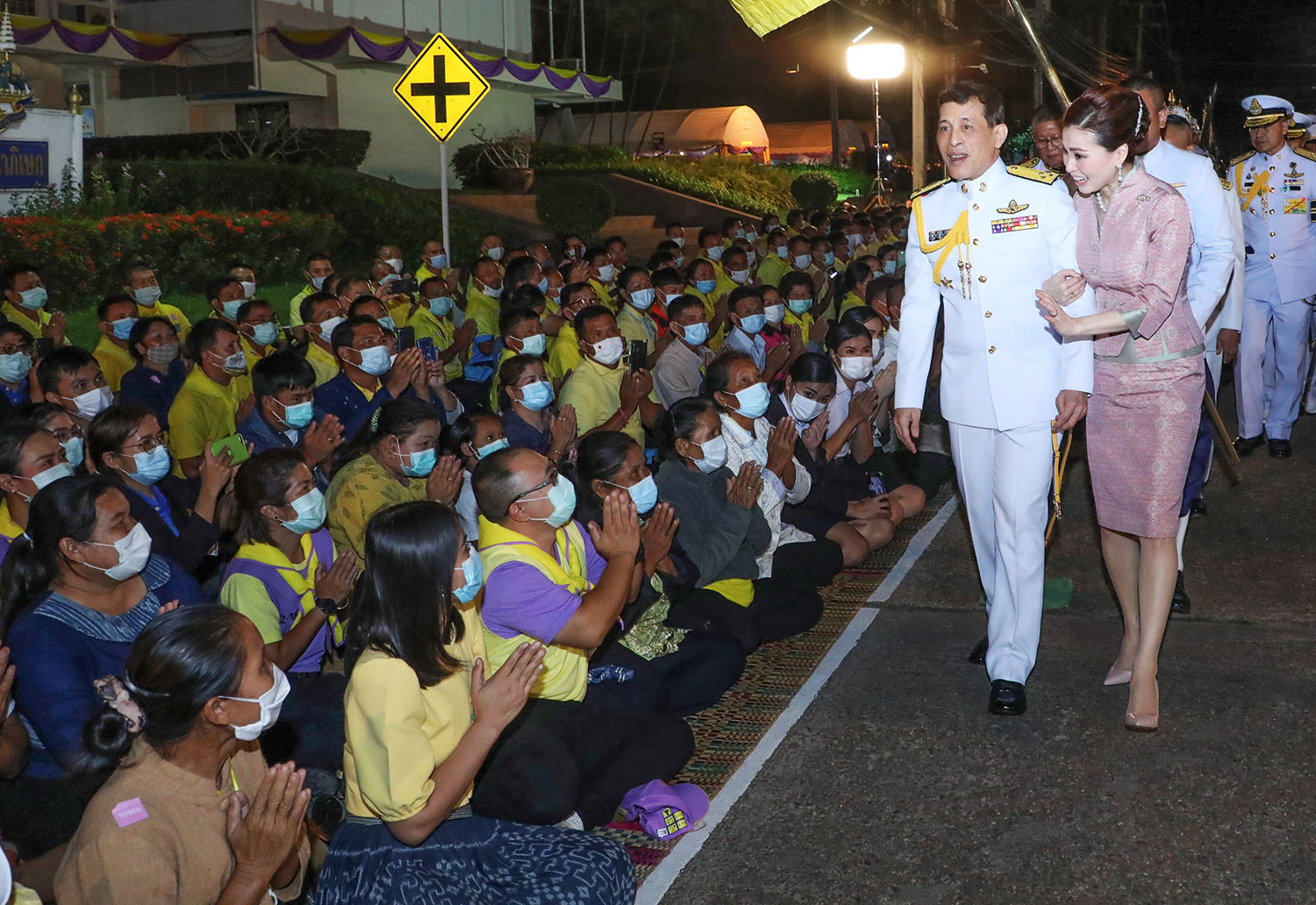 Their Majesties the King and Queen are greeted by people waiting at Sakon Nakhon Rajabhat University after finishing their functions at a graduation ceremony yesterday. (Photo by the Royal Household Bureau)

The PM urged all sides to not repeat past mistakes that might see political conflicts end in violence.

Thailand would not get the ideal society everyone wanted by wielding metal bars or through offences against institutions that were held in the highest respect, he said, but through a willingness to listen to and compromise with others.

Despite the prime minister sounding a softer tone in the address, anti-government leaders still insist they want him to stand down.

Earlier Wednesday, anti-government protesters returned to Victory Monument to press for the PM's resignation after yellow-clad royalists assembled in several provinces, and authorities feared further clashes between the two groups.

The protesters started converging on the Bangkok landmark after organisers went on social media and identified it as their principal protest venue.

Thousands of demonstrators flocked to there and repeated their calls for a new government and constitutional changes. They also marched to Government House to submit a resignation letter for the prime minister to sign, but were blocked by police officers.

Deputy-secretary-general to the PM, political affairs, Prateep Keeratireka, accepted the letter on the PM's behalf and the protesters duly vowed to take a step back if the prime minister resigned within three days and ended all legal action against their leaders. 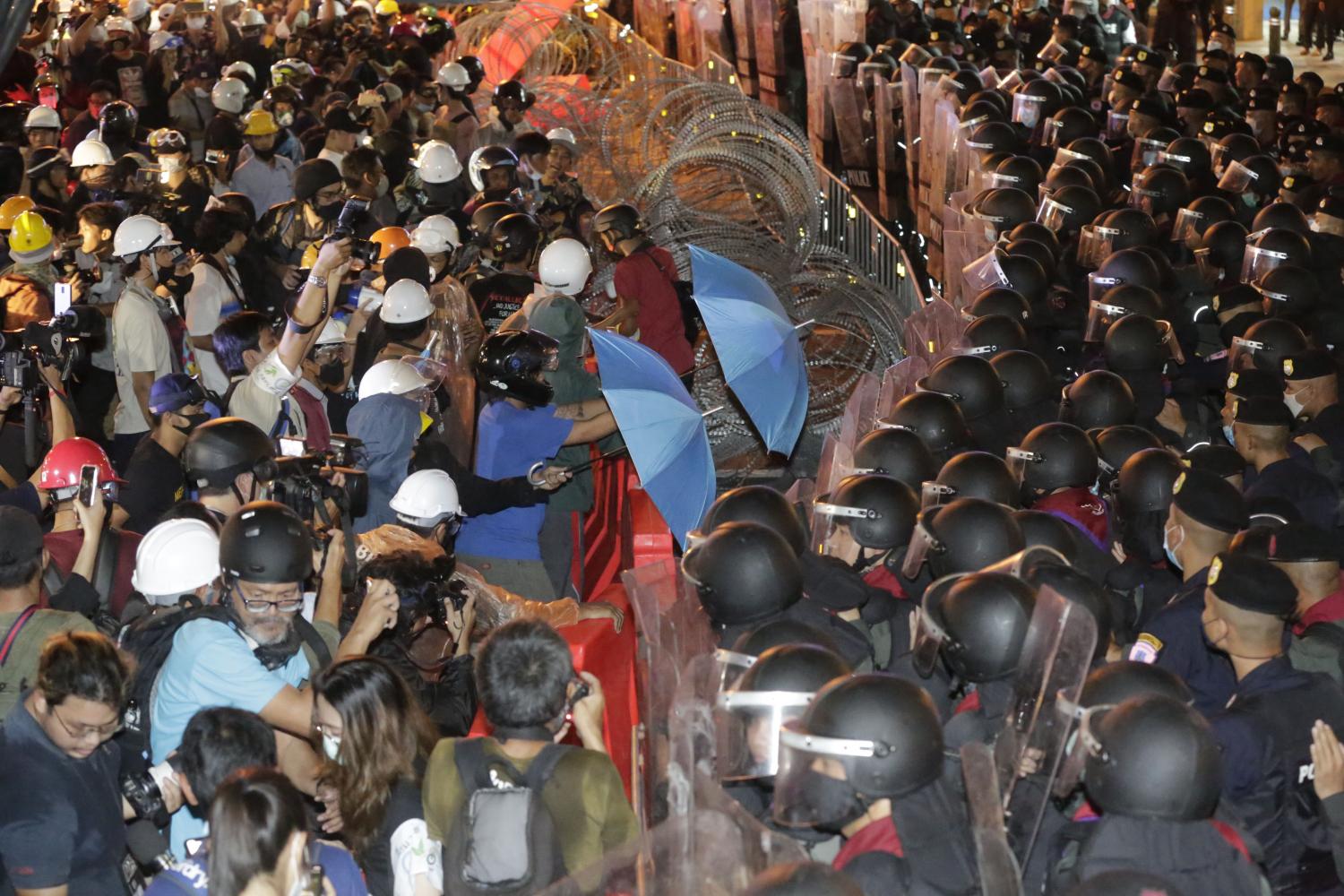 Anti-government protesters on Wednesday attempt to break through a police line at Uruphong intersection as they marched to Government House. (Photo by Pornprom Satrabhaya) 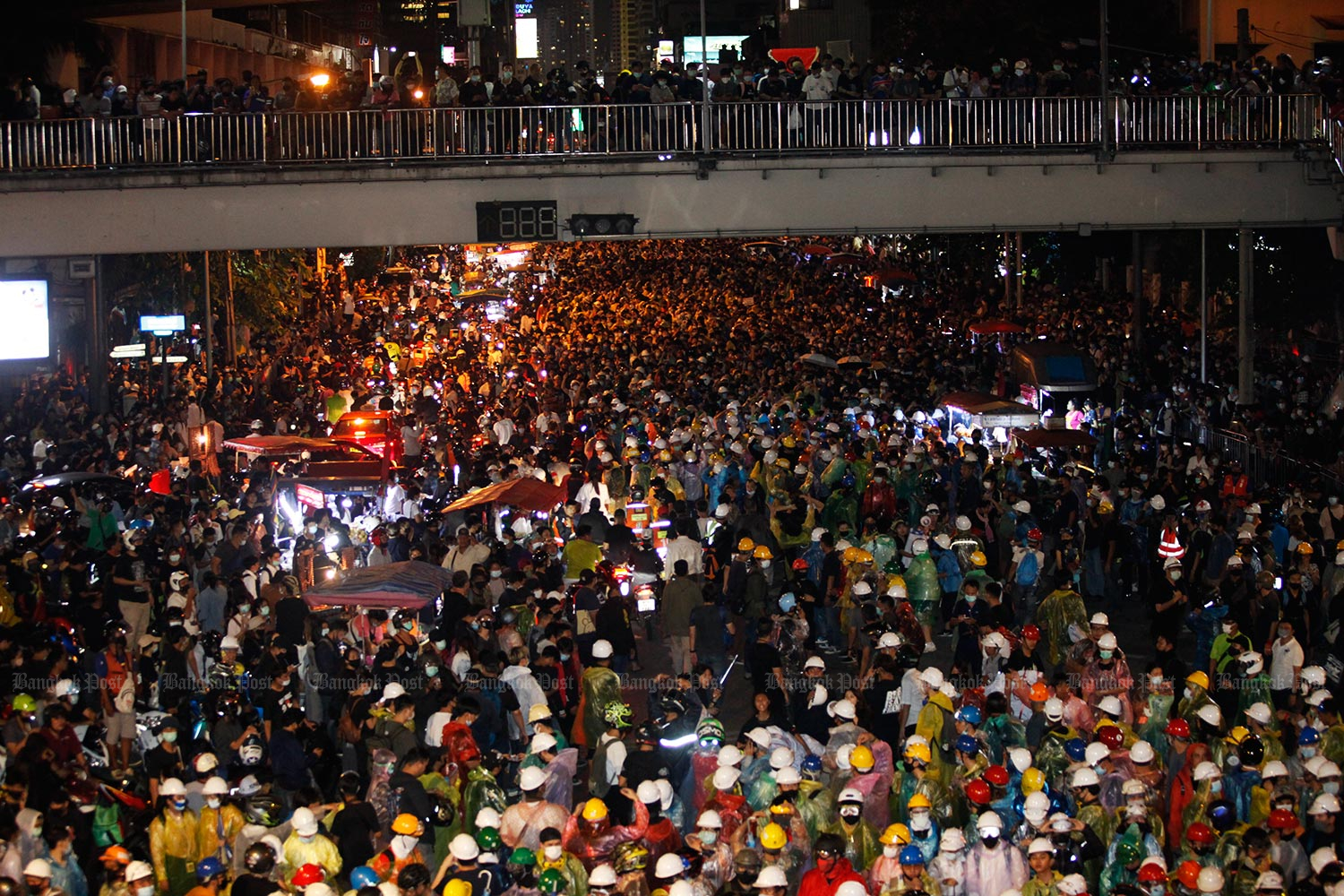 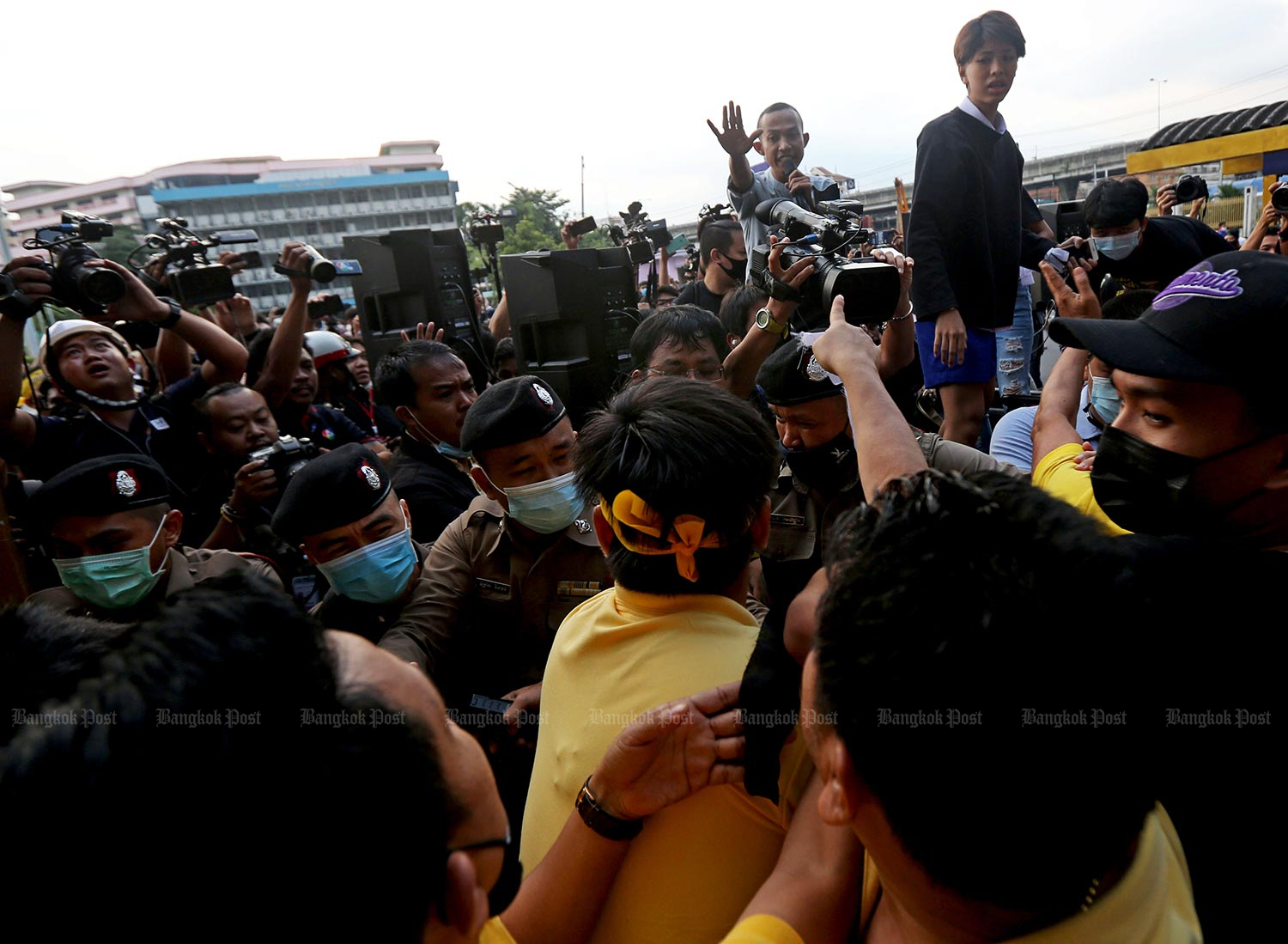 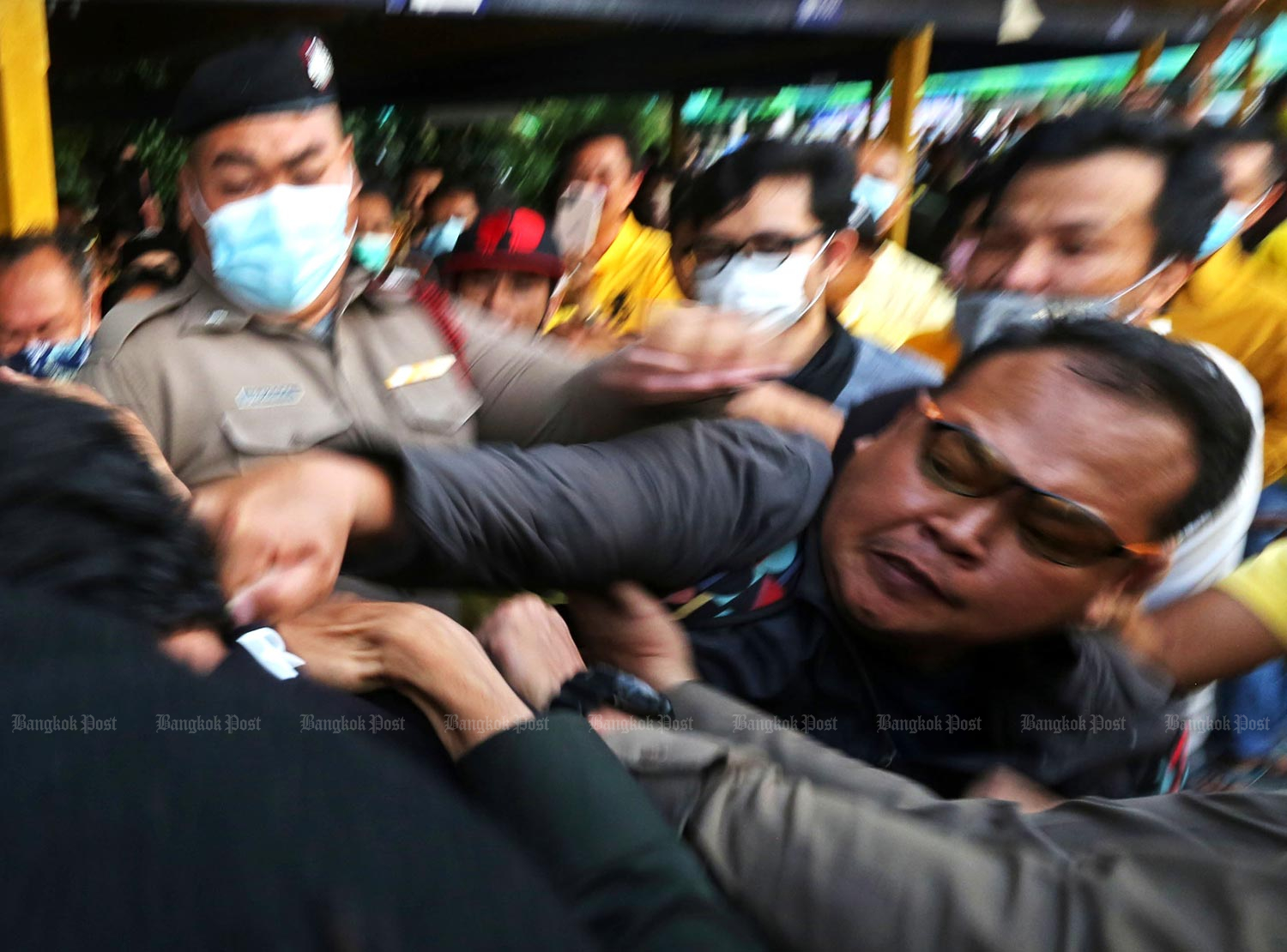 A policeman tries to stop protesters and royalists clashing at Ramkhamhaeng University. (Photo by Varuth Hirunyatheb) 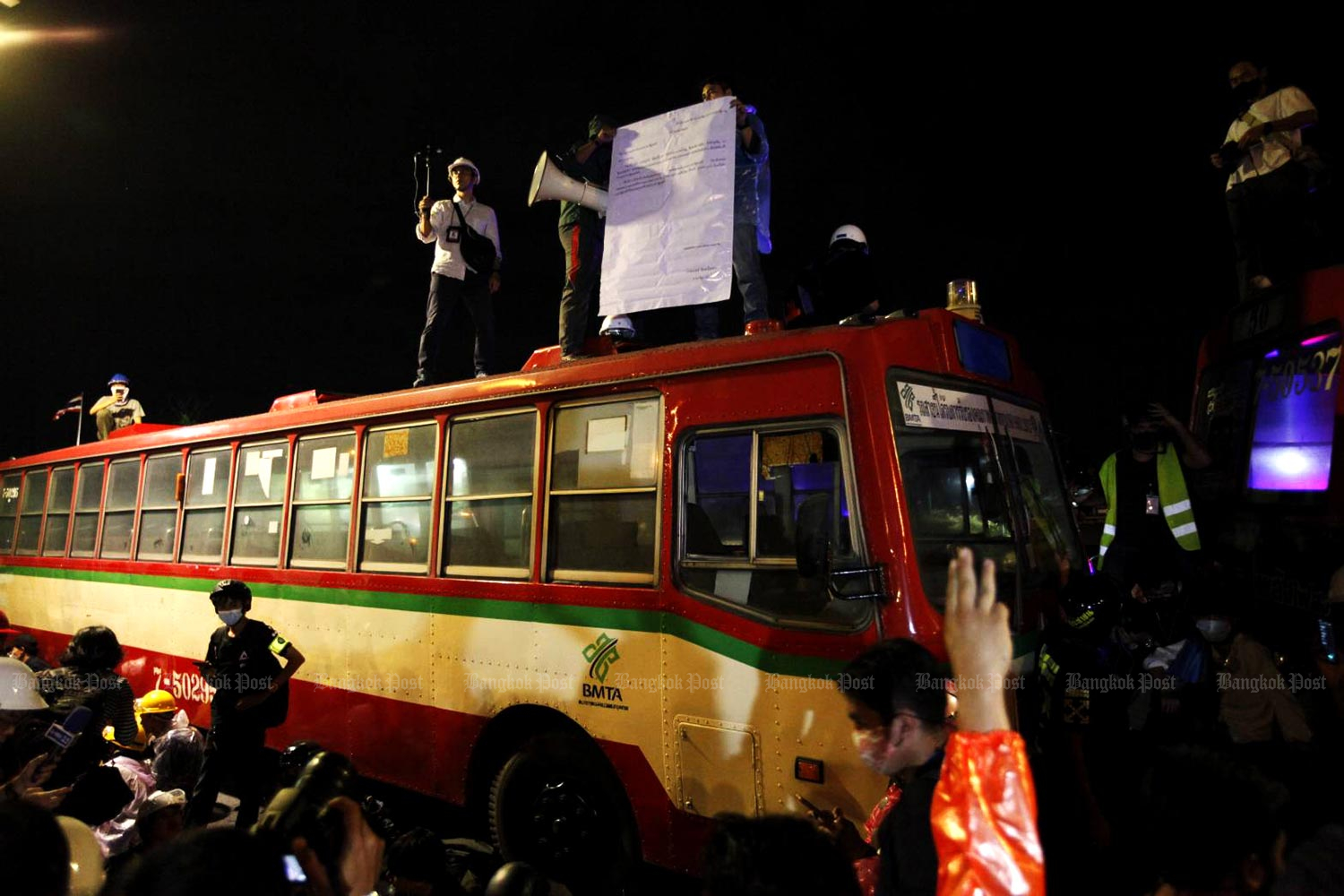 Protest leaders stand on a bus to show a resignation letter they have prepared for Prime Minister Prayut Chan-o-cha to sign yesterday at Chamaimaruchate Bridge near Government House. (Photo by Wichan Charoenkiatpakul) 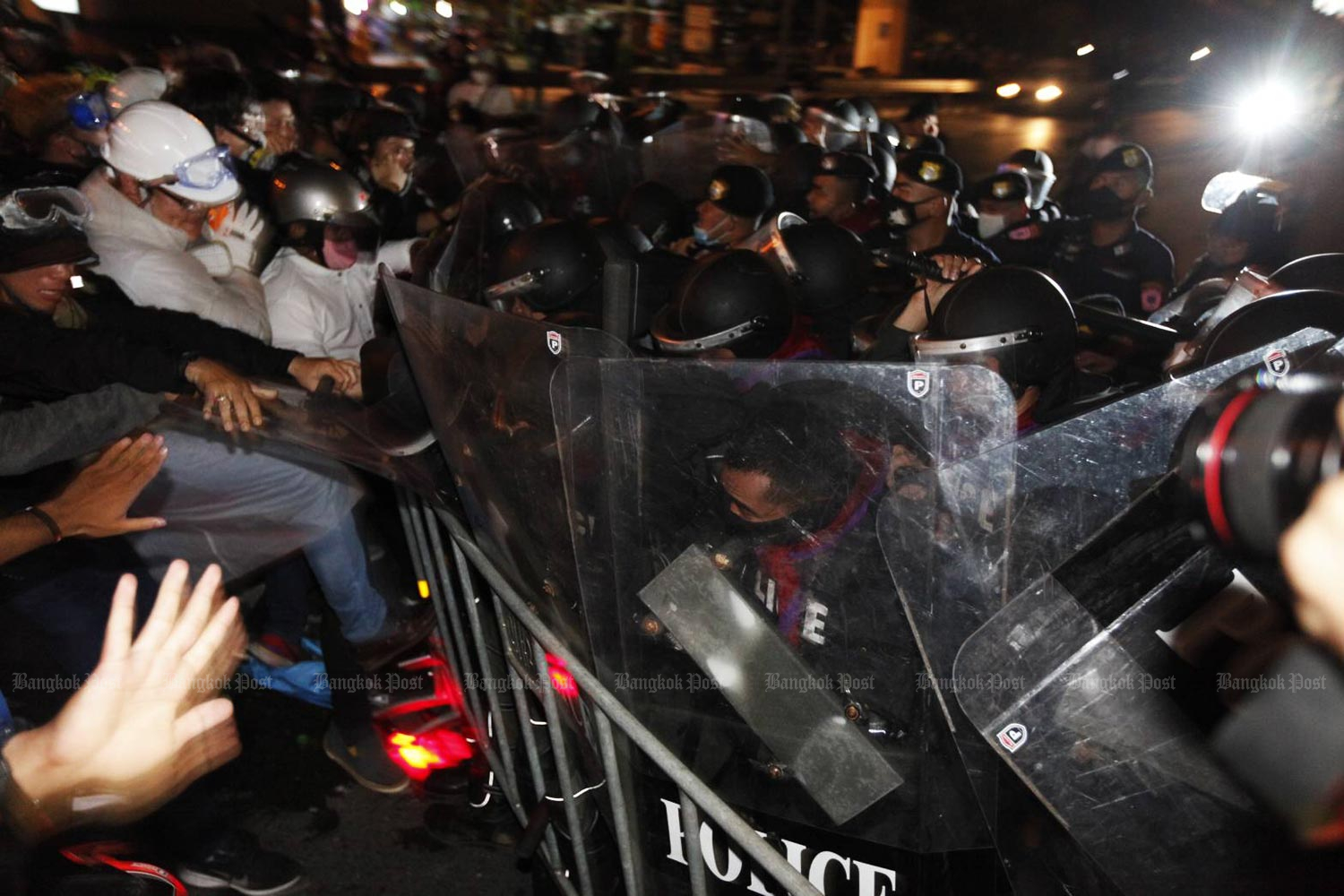 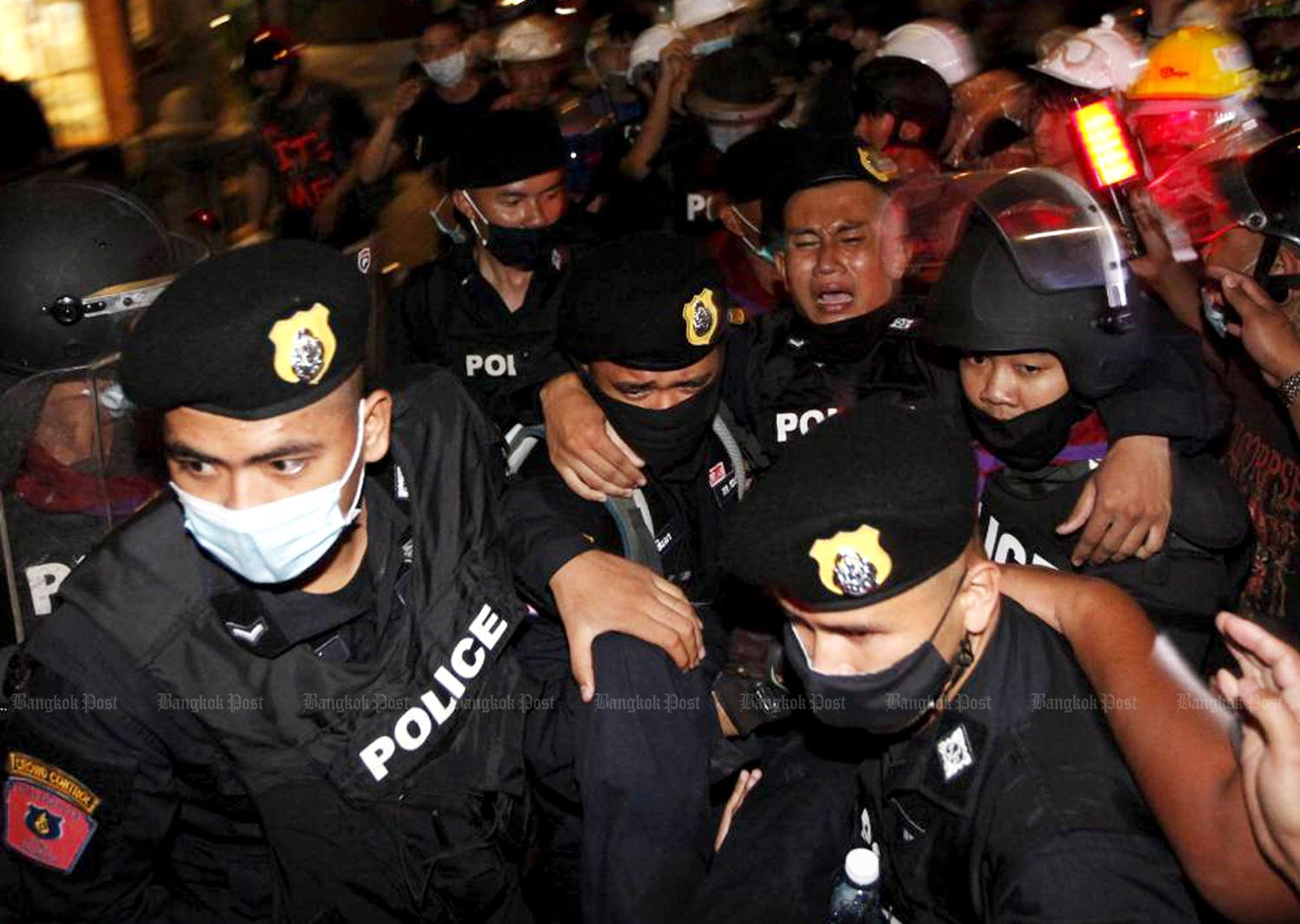 An injured policeman is rescued by colleagues from clashes at Uruphong intersection. (Photo by Wichan Charoenkiatpakul) 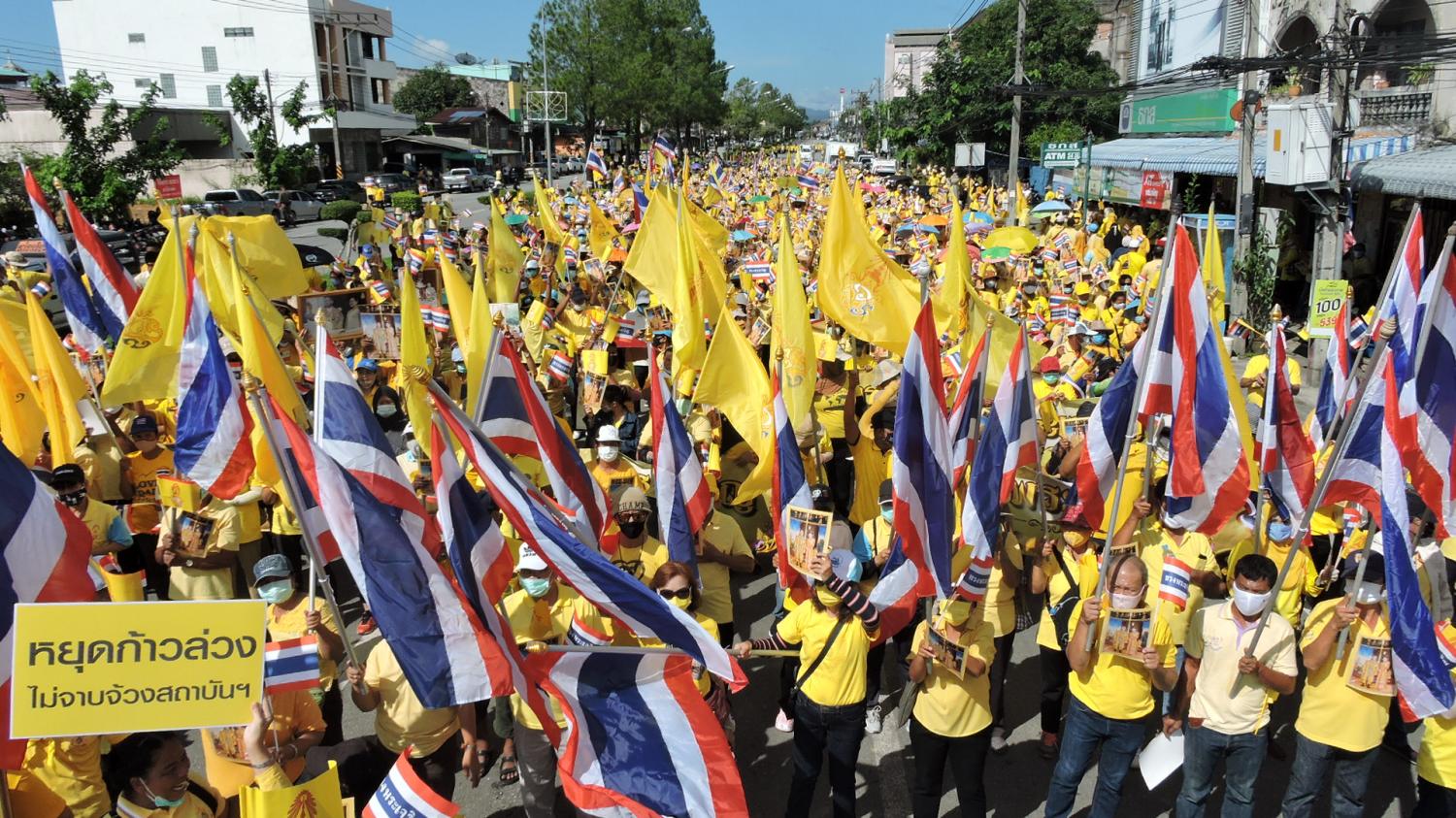 Hundreds of yellow-clad protesters gather on a section of Asian Highway 18 in Narathiwat's Sungai Kolok district yesterday morning in a rally aimed at demonstrating their loyalty and support for the monarchy. (Photo by Waedao Harai)

Tens of thousands of protesters marching from the Victory Monument to Phitsanulok Road encountered a wall of barriers fortified by barbed wire erected by police officers at the Uruphong intersection.

His Majesty the King on Wednesday issued a royal decree supporting the special parliamentary session that is due to begin next Monday, according to an announcement published on the website of the Royal Gazette.

Earlier in the day, Pol Maj Gen Yingyos Thepchamnong, spokesman for the Royal Thai Police, dismissed a rumour spreading among the anti-government protesters that the police were considering using live bullets to kill them.

He called it a malicious rumour and police were pursuing legal action against those behind it.

Since Oct 13, police have detained 77 people, 22 on criminal charges, 54 for violating the emergency decree and one for resisting a police order, he said.

Asked if a social media post by Pareena Kraikupt, a ruling Palang Pracharath Party MP for Ratchaburi, who urged the anti-government protesters' opponents to come out to protest as well was a violation of the emergency decree, Pol Maj Gen Yingyos insisted the police would take legal action against any side found inciting violence or violating the emergency decree.

Following Wednesday's anti-government protester gatherings, the operators of BTS SkyTrain and Airport Rail Link responded to the government's joint Centre for the Resolution of the Emergency Situation's (CRES) announcement by announcing a suspension of their services.