Union demands end to use of city buses to block protesters

BMTA buses block the approach to the Grand Palace on Sunday, during the protest rally at Sanam Luang. (Photo: Wichan Charoenkiatpakul)

The city bus workers union is demanding an end to the use of BMTA buses to block the path of protest marchers, saying the agency is being wrongfully dragged into the political conflict.

The State Enterprise Workers Union branch at the Bangkok Mass Transit Authority (BMTA) on Thursday said no more city buses should be used by police as blockades to halt the progress of protest marchers.

The union also staunchly opposed a move by the Metropolitan Police Bureau and BMTA to bring claims against the protesters for damage to buses used as barriers.

"The workers union strongly disagrees with police and the BMTA suing the protesters for the damage," it said in a statement issued on Thursday.

The union statement did not say who should be responsible for the damage. But its previous statement, on Oct 26, said police should bear the cost. (continues below) 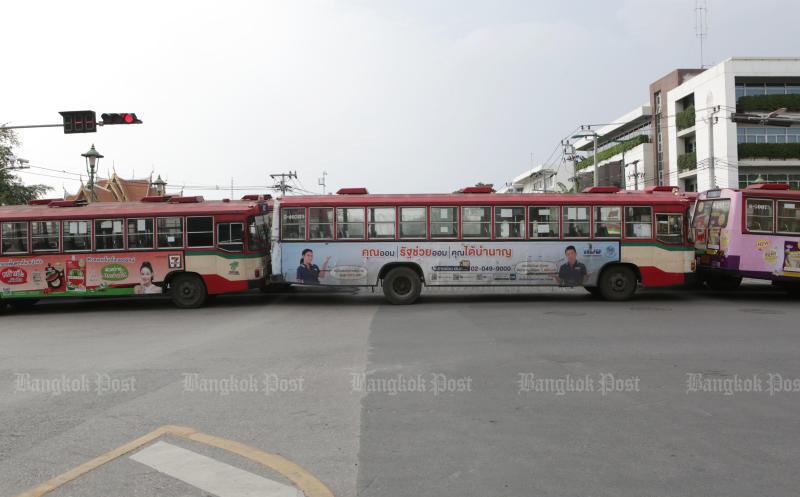 Empty BMTA buses block the road between the rally at Democracy Monument on Sunday and Government House. (Photo: Apichit Jinakul)

Ordinary "hot-air" buses have been parked across roads to obstruct protest marches on at least six occasions, including on Oct 14 when they were used to block the way to Government House.

Most recently, they were used last Sunday at Sanam Luang. Three buses were parked to prevent demonstrators from walking over to the Grand Palace, with police lined up behind them.

Buses were also seen on other roads the marchers may have chosen to use when leaving the Democracy Monument.

The union is also at odds with BMTA director Surachai Iamwachirasakul for allowing city police to use the vehicles for the wrong purpose. Its Oct 26 statement demanded that he protect the fleet from such misuse, and even threatened legal action against him if he continued to ignore their call.

"People are being mislead into believing the BMTA is taking sides in politics, and that is damaging the agency," union leader Boonma Pongma said.