Parliament's rejection of the people's constitution amendment draft has left anti-government protesters with no other choice but to press on with their street protests to achieve their goals, Jatupat "Pai Dao Din" Boonpattarasaksa, a protest leader, vowed on Wednesday.

He was speaking after the draft, sponsored by rights group Internet Dialogue on Law Reform (iLaw) and supported by more than 100,000 people, was rejected at the end of the first reading.

Only two drafts were passed on Wednesday at the end of the two-day parliamentary session held to scrutinise a total of seven drafts, including the iLaw measure. The drafts which were approved were proposed by the coalition parties and the opposition parties respectively.

Mr Jatupat said he would not participate in a committee on reconciliation, touted as another attempt to defuse the political conflict between the government and protesters. He said Wednesday's decision by parliament was the last chance at compromise. 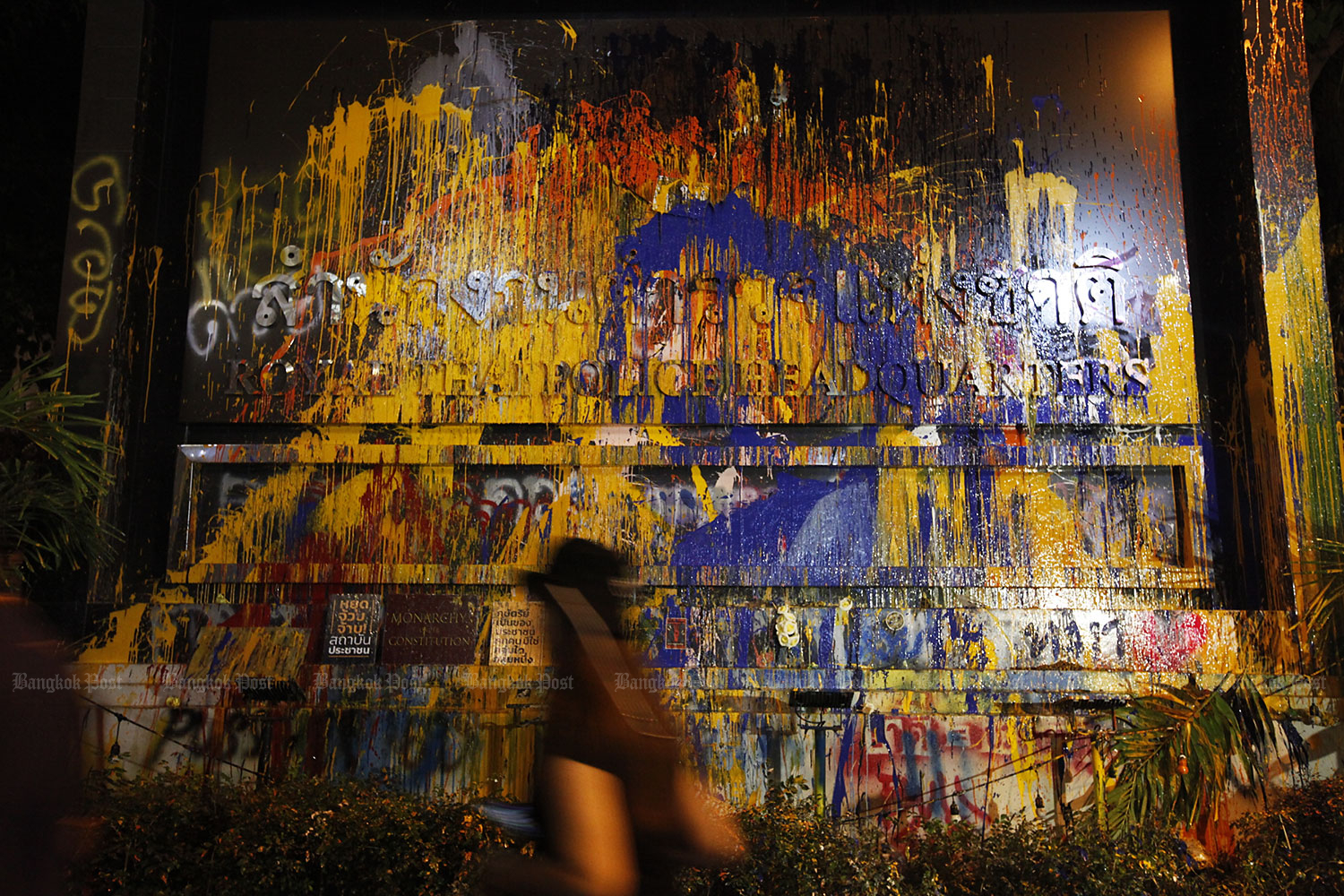 Anti-government protesters fill the road at Ratchaprasong intersection where they held another huge rally yesterday. The protesters also threw paint at the entrance of the nearby Royal Thai Police Headquarters. (Photo by Pornprom Satrabhaya) 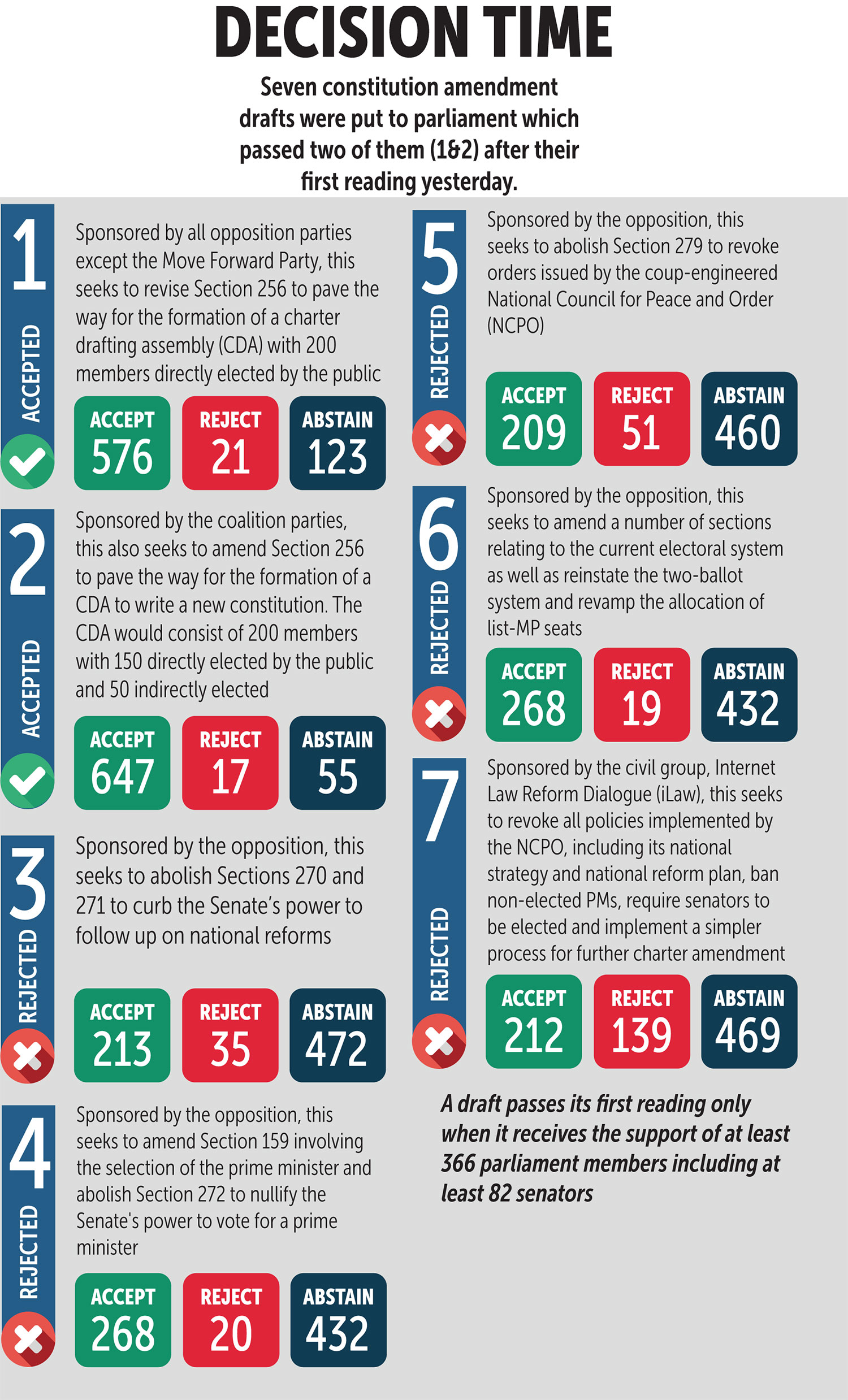 Free Youth, a key element in the anti-government movement, posted on its Facebook page accusations of most MPs and senators serving the "dictator" and ignoring calls by the people.

The group also accused parliament of barring attempts to amend Chapters 1 and 2 of the constitution, which deal with general provisions and the King respectively. This suggests any new constitution that was drafted would not really serve the people, said the group.

Protest co-leader Arnon Nampa told protesters not to splash paint at the portrait of Her Majesty Queen Sirikit The Queen Mother installed at the Royal Thai Police Headquarters. He said the target of the protesters was the police force and the protesters should not move away from that target as they would be walking into a trap set by the police. He did not elaborate.

Thousands of protesters began gathering at the Ratchaprasong area in downtown Bangkok late Wednesday before moving on to the national police headquarters nearby. The presence of the protesters prompted police to step up security at the palace and King Chulalongkorn Memorial Hospital nearby, deploying six companies of riot-control officers. Some protesters splashed paint onto the Royal Thai Police sign and sprayed paint on the road, while others began a barbeque right at the protest site, said a source. 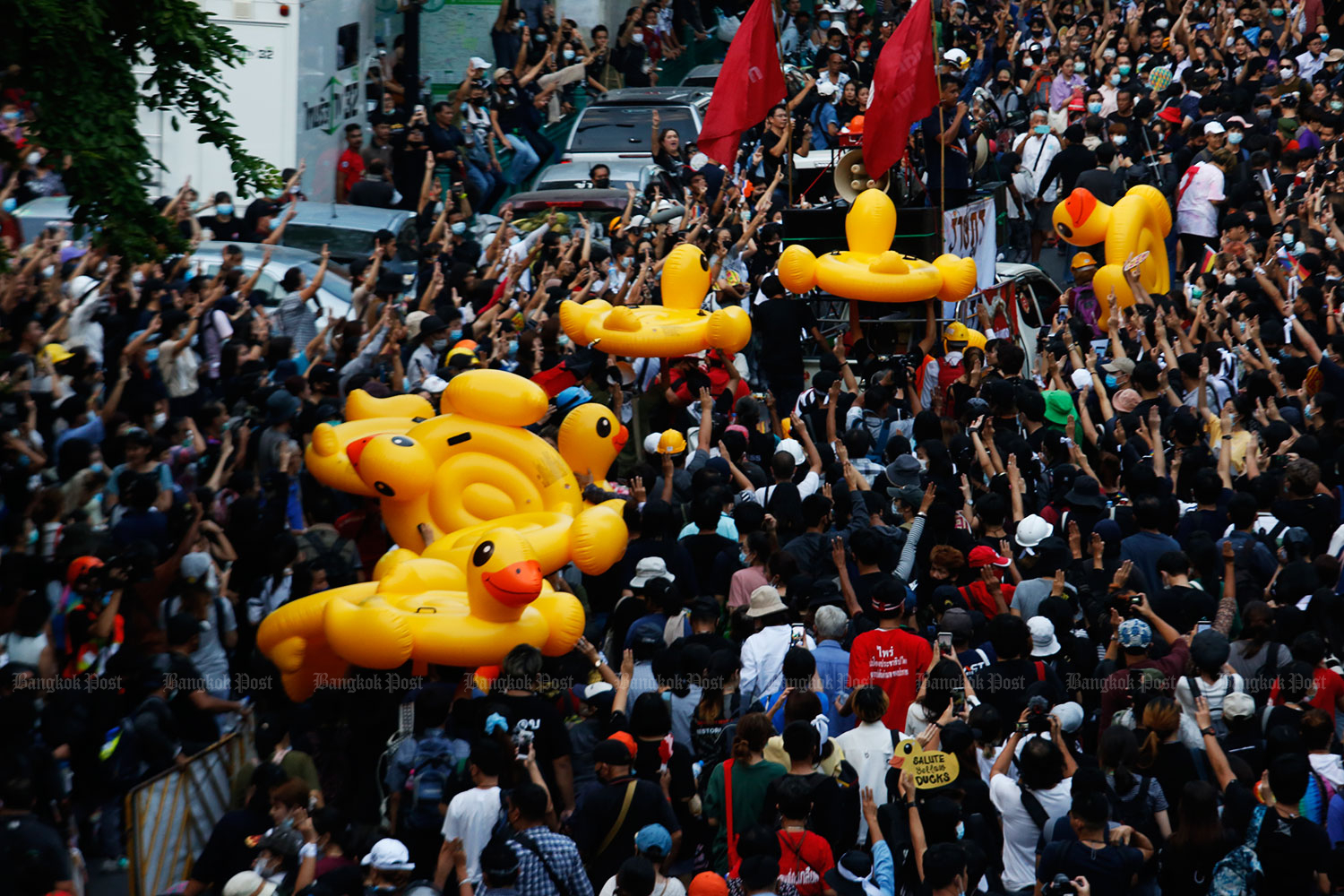 Giant inflatable ducks, a symbol of the protest, are passed among protesters who returned to occupy the Ratchaprasong intersection yesterday and learned of parliament’s rejection of the draft charter proposal initiated by iLaw, which they support. (Photo by Arnun Chonmahatrakool) 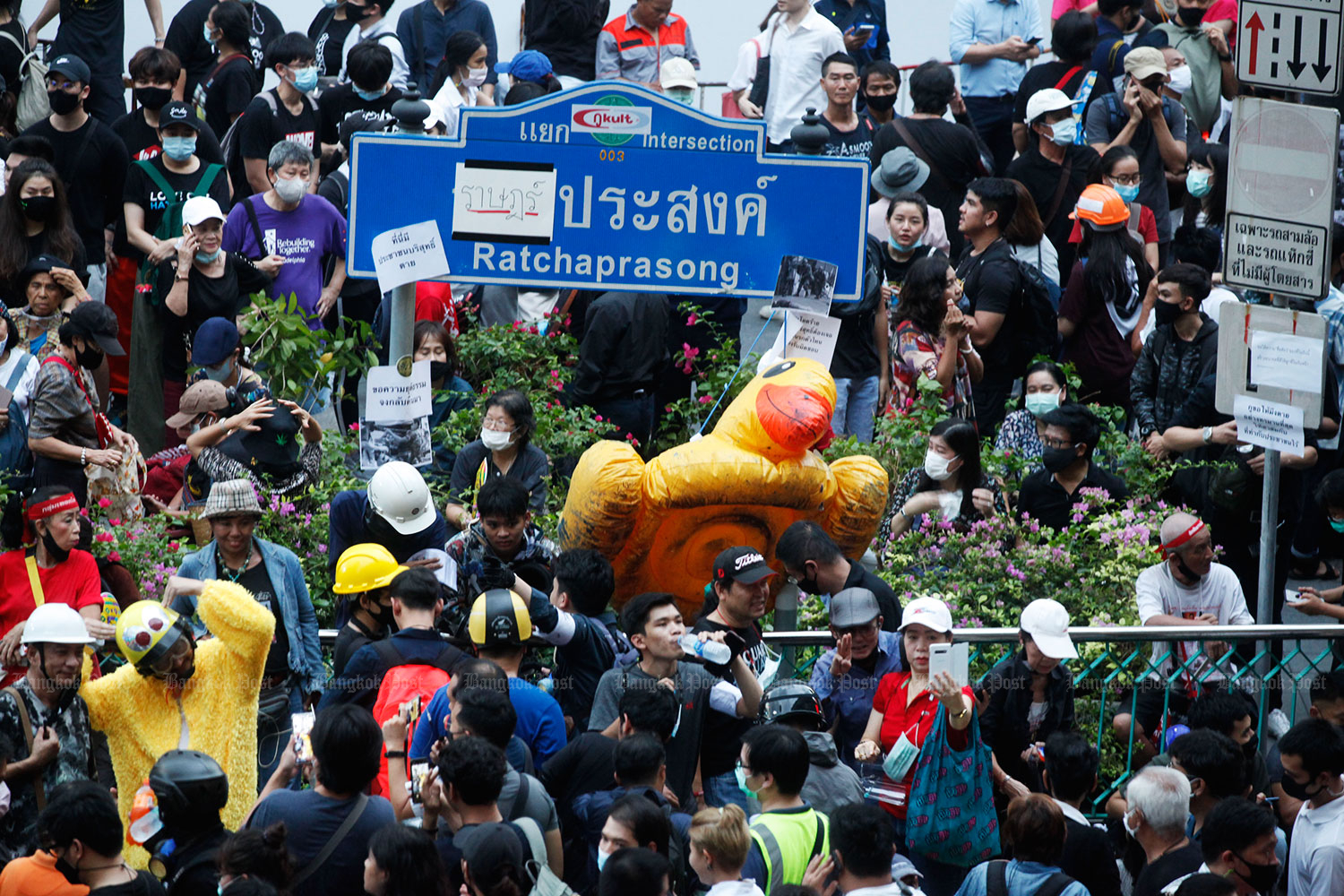 A piece of paper is used to partially cover a street sign so that the word Ratchaprasong means ‘People’s Wish’. (Photo by Pornprom Satrabhaya) 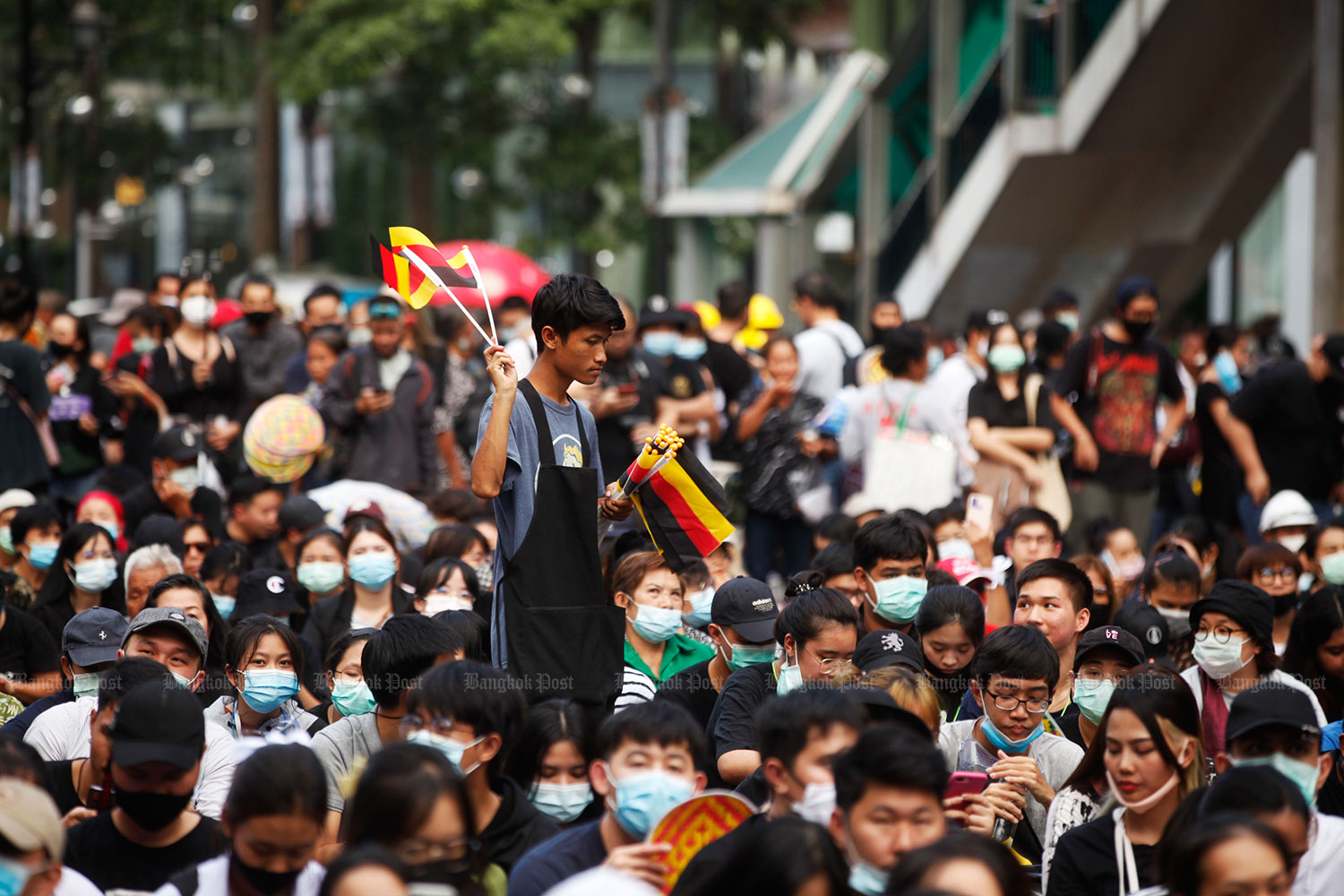 Coloured flags are distributed to protesters at yesterday’s rally. (Photo by Pornprom Satrabhaya) 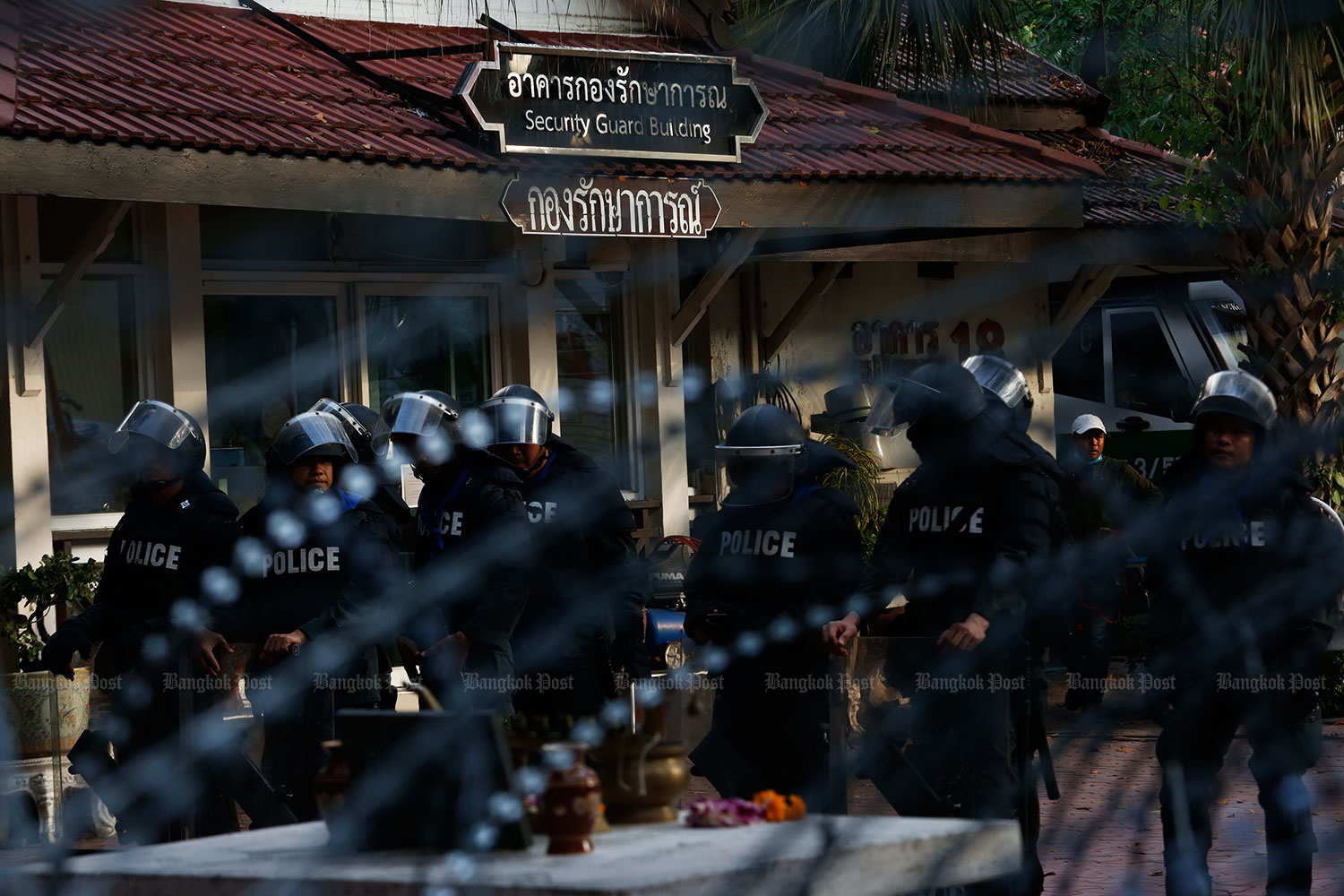 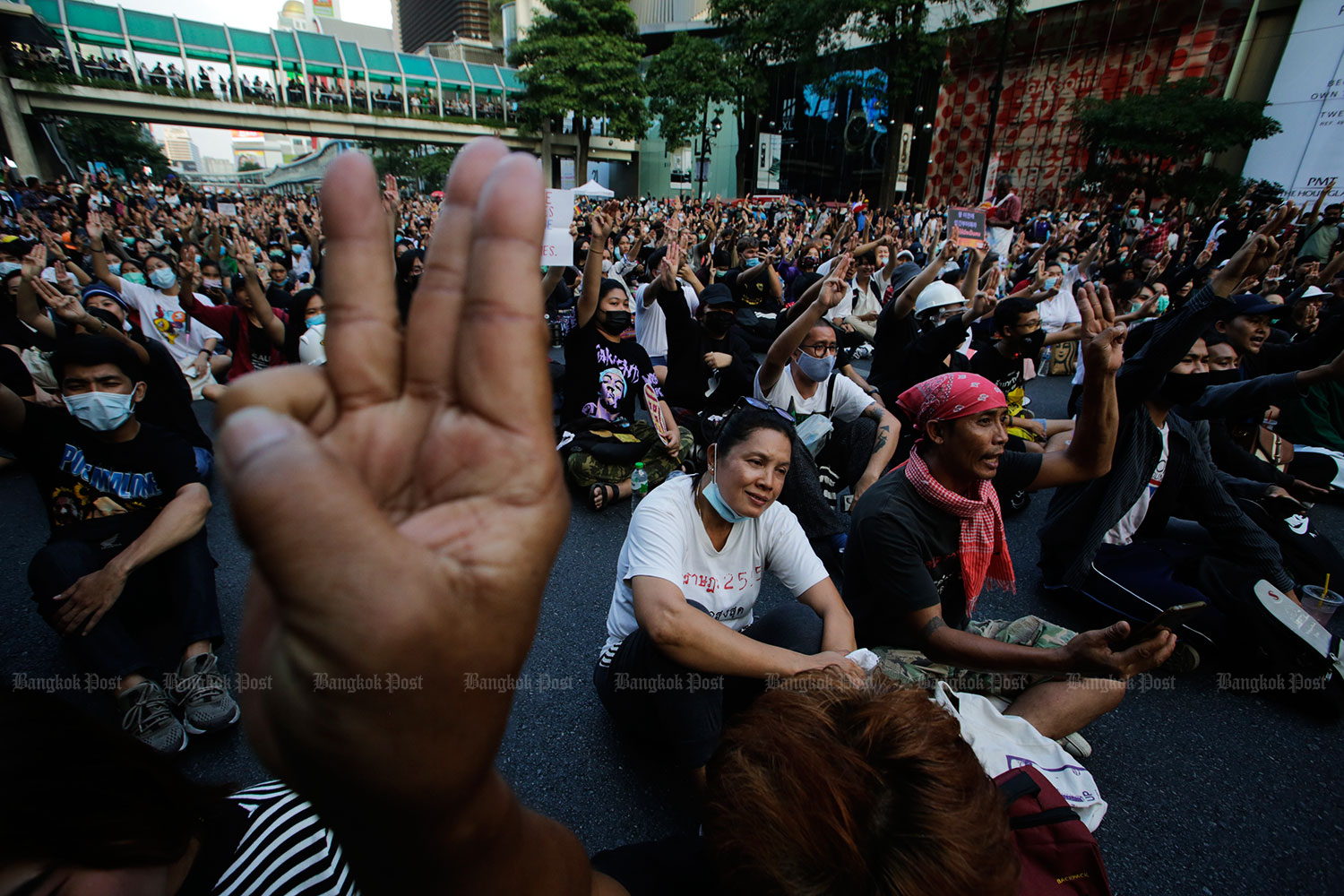 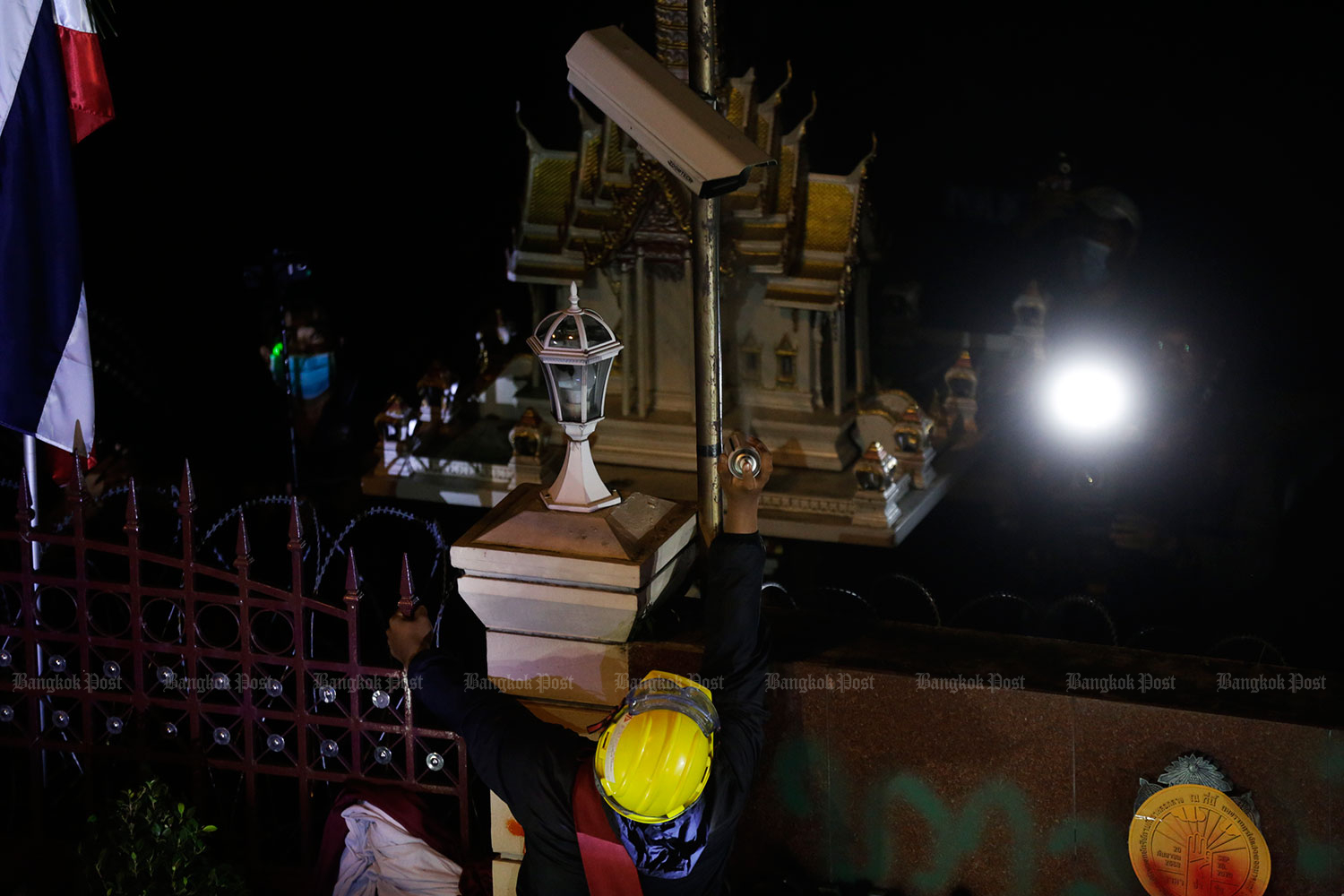 A man tries to spray-paint a closed-circuit camera installed on a wall at the Royal Thai Police Headquarters. (Photo by Pornprom Satrabhaya) 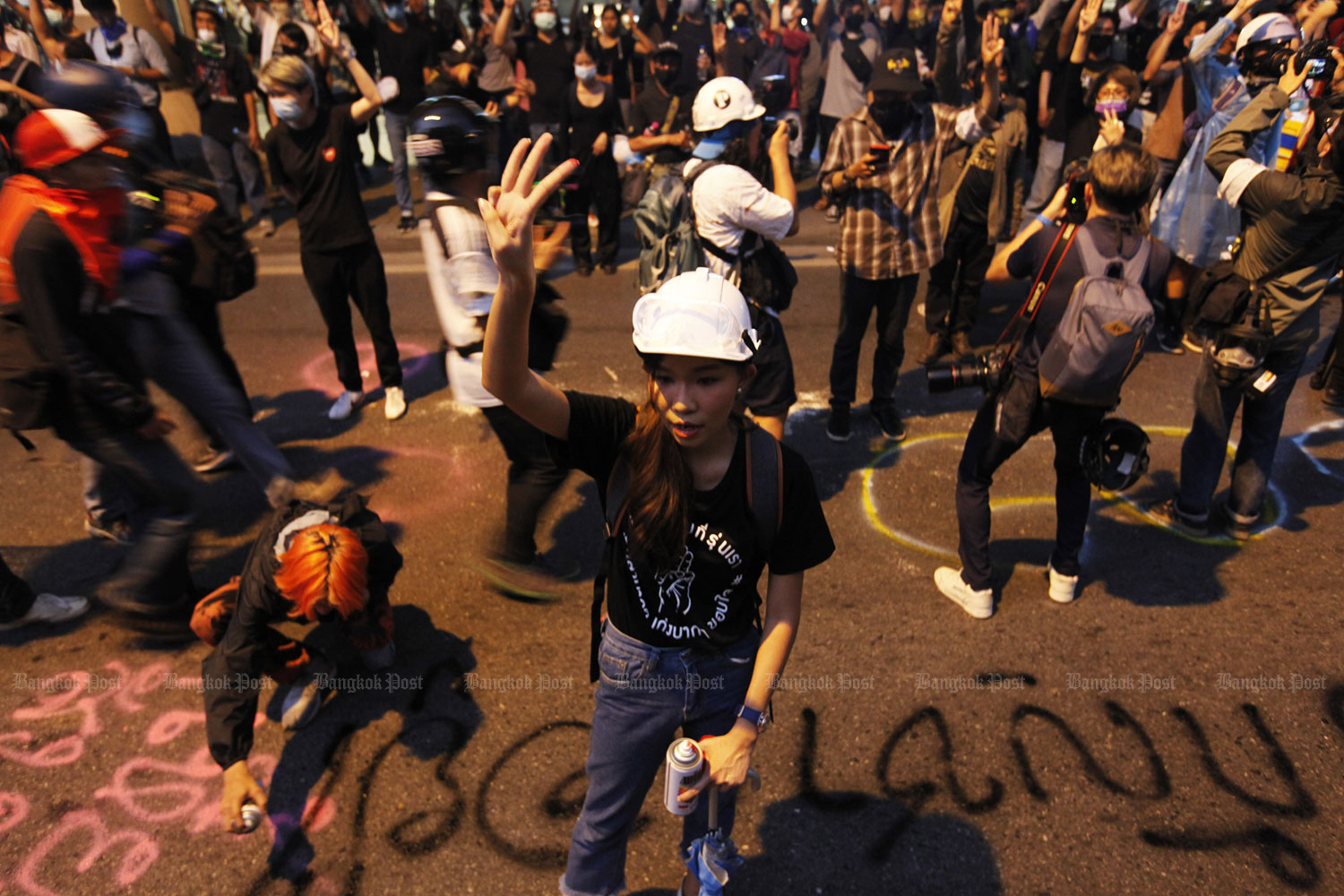 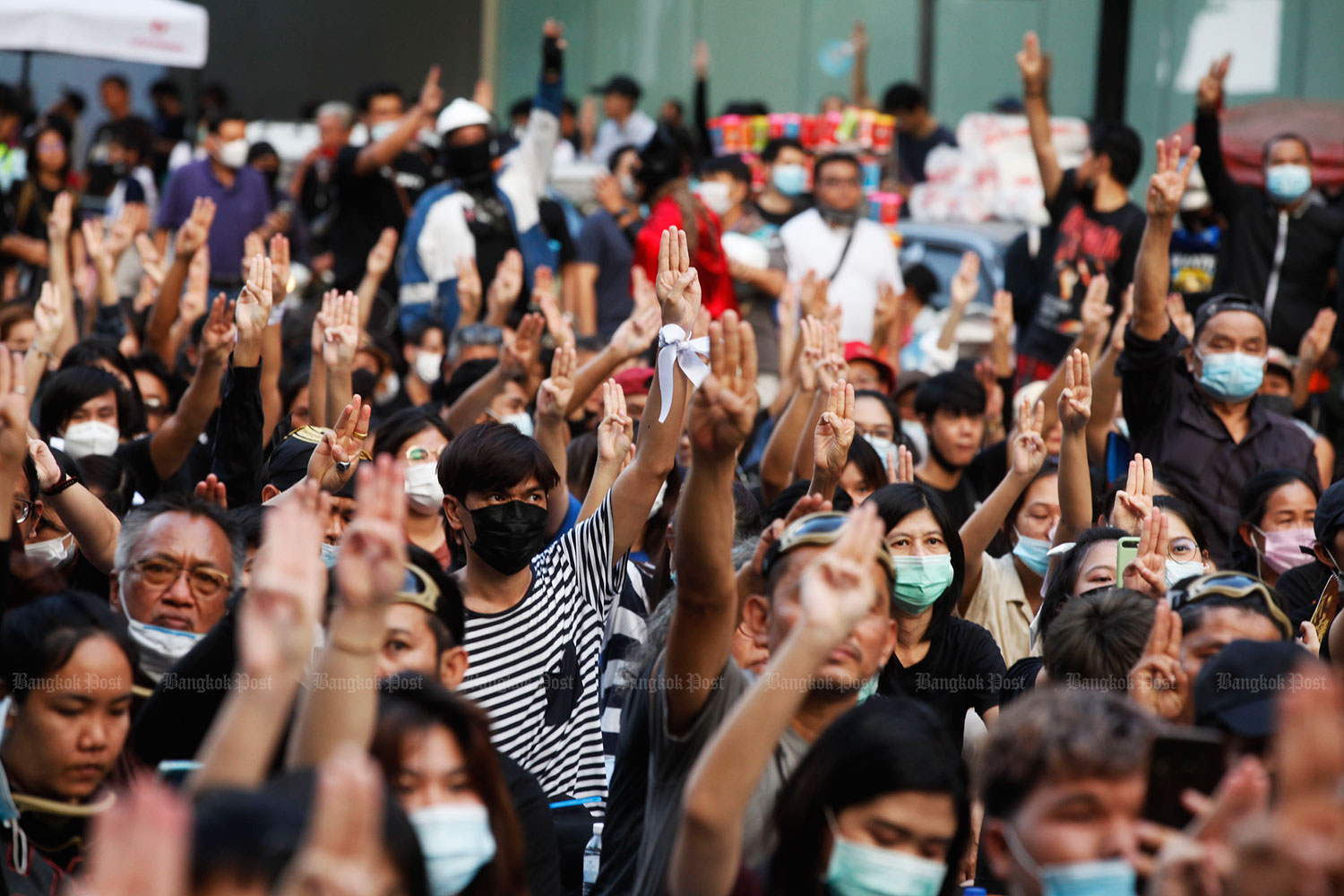 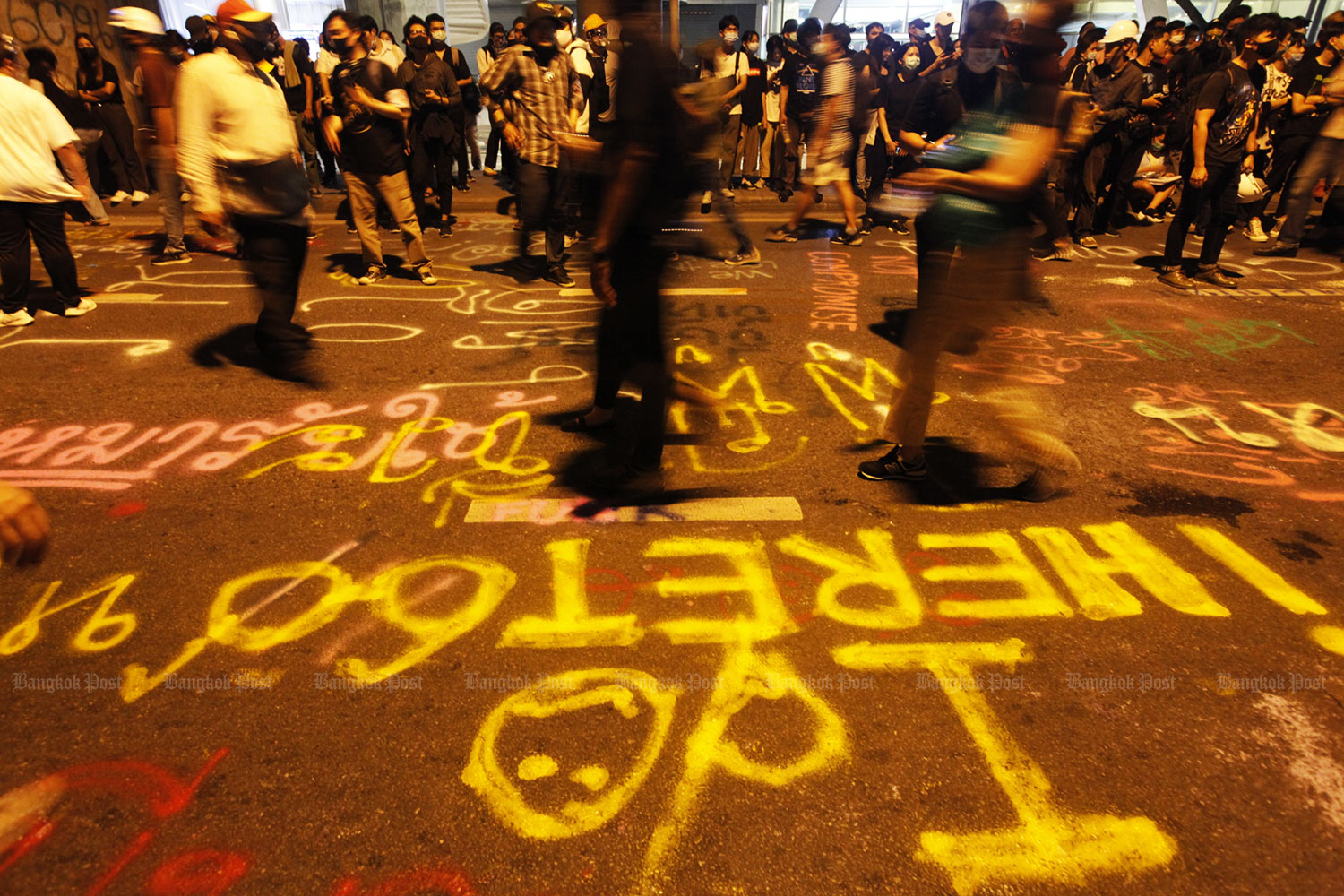 Messages are painted on the road by protesters to vent their frustration against the government. (Photo by Wichan Charoenkiatpakul)

Protesters aimed to submit an open letter to police demanding they take responsibility for Tuesday's incident, in which police used a water cannon truck to fire at protesters when they attempted to breach the barricade in front of parliament. The clash led to a score of injuries on both sides. The Bangkok Metropolitan Administration's Erawan Centre reported some people were wounded by gunshots at Tuesday's rally.

Parit "Penguin" Chiwarak, another protest leader, Wednesday wrote on his personal Facebook page that authorities were aiming to provoke anger among demonstrators and trigger them to turn violent for Tuesday's rally. That would only lead to another military coup, he said, adding all protesters should remain peaceful no matter what happens.

Demonstrators on Wednesday called off their rally at Ratchaprasong intersection at 8.20pm and announced they will hold another rally at the Crown Property Bureau on Nov 25.

Yingcheep Atchanont, manager of iLaw, meanwhile, appeared optimistic that although the iLaw-sponsored constitution draft was voted down, the past two days showed the people's attempts to push for a charter amendment had made it to parliament. What's more, he said, several MPs expressed their support for some principles in the bill. "The vote was by MPs, not the people as such. So we don't really have to pay much attention to that. We, the people, were responsible for proposing the draft, which is now complete," he said.

Prime Minister Prayut Chan-o-cha insisted the government wouldn't resort to using any special laws to deal with the anti-government movement, which he said was tending to grow violent.

"Please understand that under this situation, it's necessary to enforce the law [more strictly]. However, it isn't necessary to employ any special laws to contain the situation," he said. While enforcement of the law may not be carried out immediately at the protest sites, offenders will face legal prosecution for legal violations they commit at the gatherings, he said.