Rallies at US, Swiss and Chinese missions end peacefully before nightly rubber-bullet ritual

Members of the Thalu Fah group gather outside the Swiss embassy in Bangkok before moving to the US embassy and wrapping up their campaign against the prime minister on Friday outside the Chinese embassy. (Photo: Nutthawat Wicheanbut)

Protesters paraded to three embassies on Friday to air their opposition to Prime Minister Prayut Chan-o-cha for his failure to curb the coronavirus surge.

The gatherings outside the US, Swiss and Chinese embassies ended peacefully, but yet another violent confrontation ensued between young demonstrators and riot police in Din Daeng.

The Thalu Fah group said it set out to deliver three different messages, one at each embassy, aimed at showing the failure of the government.

At the US embassy, the movement accused the Thai government of mishandling some of the 1.5 million doses of the Pfizer vaccine donated by Washington. There have been reports that some of the doses intended as booster shots for frontline health workers have ended up in the arms of military personnel and others with connections.

The protesters demanded that the government show transparency in the distribution of the Pfizer shots. They also presented a letter to an embassy official expressing hope that “the US government might consider more vaccine donations for the sake of the humanitarian assistance to Thailand”.

The letter to the Swiss government complained about violent measures used by security forces against protesters, which breached the Geneva Convention ratified by Thailand, and called for humanitarian treatment.

At the Chinese embassy, the group delivered a letter calling on the ambassador to look into the deals for Sinovac vaccine by the Thai government, as transparency was lacking.

While the embassy gatherings dispersed without incident, the atmosphere was tense at Din Daeng, where clashes between protesters, mostly angry young males, and police have become a nightly ritual.

Police fired tear gas after the demonstrators, most of them on motorcycles, threw giant firecrackers and ping-pong bombs. Police managed to gain control of the area and were attempting to ensure that everyone cleared out before the nightly curfew that has been as part of Covid control measures.

One video posted on the Ratsadon News Facebook page showed police stopping motorcycles during the evening rush hour. But as one motorcyclist passes, a policeman is clearly seen firing rubber bullets at him at close range.

Thalu Fah and vocational student leaders have insisted on a stance against violence in their campaigns to step up pressure on Gen Prayut to step down. 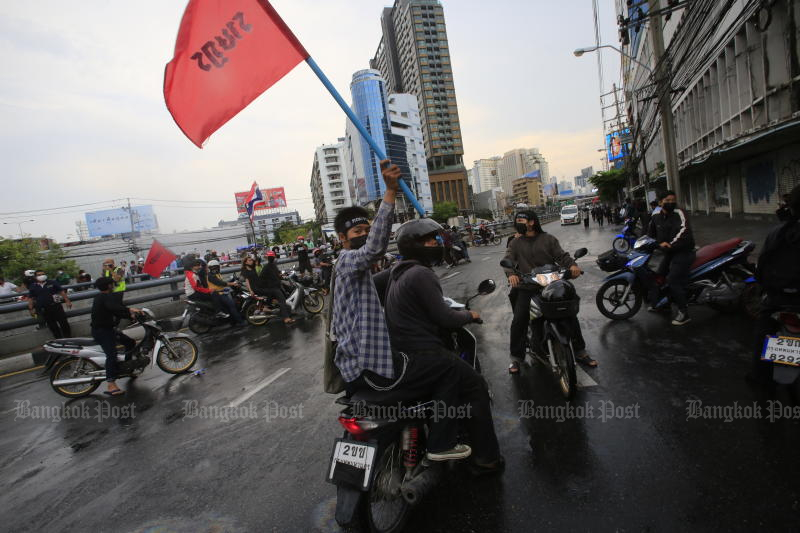