Analysis: Voters switch to candidates from opposite camps

Mr Chadchart received 1,386,215 votes, ahead of Suchatvee Suwansawat of the Democrat Party, who received 240,884 votes, according to the unofficial results of the Bangkok Metropolitan Administration (BMA).

Phichai Ratnatilaka Na Bhuket, a political science lecturer at the National Institute of Development Administration [Nida], told the Bangkok Post that Bangkok voters have a broader political outlook and most of them are politically liberal and do not cling on to the political camps they had previously supported.

He said Bangkok was once the stronghold of the Democrat Party for a long time before being taken over by the ruling Palang Pracharath Party [PPRP] in the 2019 general election.

But the outcome of the Bangkok governor poll showed candidates from the government's opposing camps won more votes than those who supported the government at a ratio of 65% to 35%, Mr Phichai said, adding the votes for Suchatvee Suwansawat representing the Democrat Party came mostly from conservative groups.

"From now on, the Democrats and the PPRP may not be in a position to compete with the Pheu Thai Party and the Move Forward Party [MFP] for House seats in Bangkok in the next general election," Mr Phichai said.

He pointed out that most Bangkok residents were not happy with the government's performance, prompting them to vote for candidates from the camps which are opposed to the government.

He also said the number of Bangkok councillor seats won by each party may also be a pointer to the number of House seats in Bangkok which the Pheu Thai and the MFP are expected to win at the next general election.

Wuthisarn Tanchai, secretary-general of the King Prajadhipok's Institute, shared the view, saying there was a connection between the election of Bangkok councillors and national politics.

As for the Bangkok governor election, most voters did not care much about to which parties candidates belong, but favoured candidates with practical policies, he said.

Jade Donavanik, former adviser to the Constitution Drafting Committee, said the results of the governor and city council elections indicated that voters were frustrated with the performance of the previous governor as well as the government's performance.

"The results may also reflect the future outcome of the general election and shift the balance of power in politics,'' Mr Jade said.

Other academics also offered their take on the outcome of the governor poll.

Kittitouch Chaiprasith, an independent academic, posted on Facebook that the poll may see a new governor who has won the most votes in the history of governor elections, which could herald the start of what he called "political moderatism".

The winning candidate is expected to stay away from conflict and be willing to work with everyone from across the political spectrum, he said.

With the former Pheu Thai heavyweight Mr Chadchart leading by a landslide, former election commissioner, Somchai Srisutthiyakorn said he was confident the result was already sealed. "There will be no upset as the vote is counted," he said.

Mr Somchai said voters, including those casting a ballot for the first time, supported Mr Chadchart regardless of their feelings about his political background with the Pheu Thai Party. "Votes for Mr Chadchart came from both Pheu Thai supporters and those who did not support Pheu Thai," he said.

After learning of the unofficial poll results, Mr Chadchart said: "There's no difference between those who voted for me and those who did not. I will meet the people out there from now on."

Mr Suchatvee said he had to thank people who voted for him, adding none of the votes will be wasted as they will give him moral support to carry on working for city residents. "I know that I have the capabilities to help solve Bangkok's problems.

"I can assure you that every vote you cast for me will not be in vain. The votes are a source of morale to continue working with determination. I think I still have a chance to work and once I get down to working, I will not disappoint," he said.

MFP candidate Wiroj Lakkhanaadisorn said: "Thank you everyone for trusting in me. The votes show less than 60% of turnout chose (candidates) on the government's side. It means the people of Bangkok have no hope with the government." 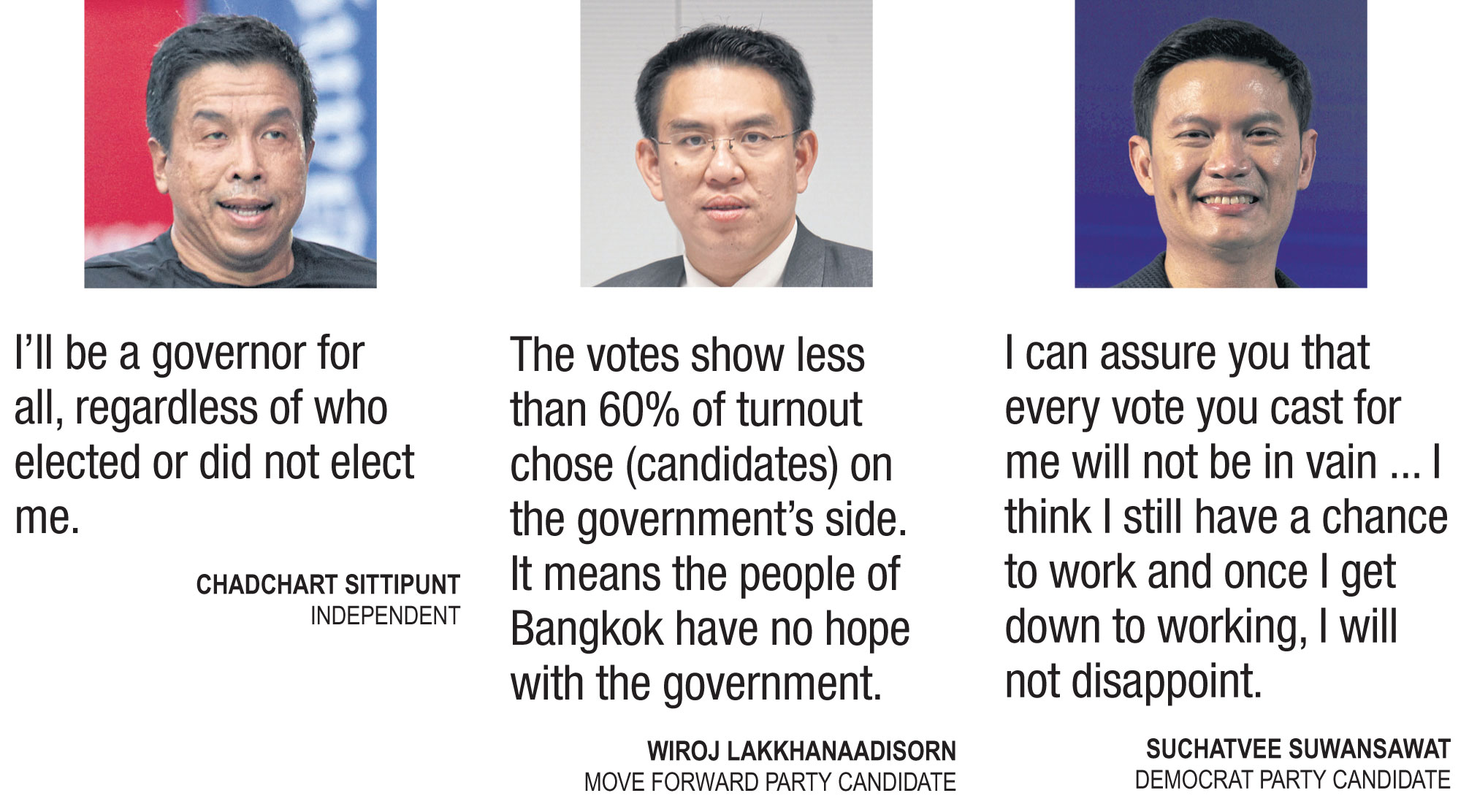 Voters went to the polls to cast their ballots in the elections for Bangkok governor and city councillors yesterday. This is the first time in nine years that Bangkokians have been able to cast a ballot to decide the capital's leadership.

The BMA said there was a turnout of 59.7% of 4.4 million eligible voters. Voters cast ballots at polling booths in 50 districts in Bangkok, with many in Bang Khun Thien district braving heavy rain to cast ballots for the Bangkok governor and 50 Bangkok councillors. The focus was on the 31 candidates vying for the top job at City Hall.

At 5pm, vote counting began at all 6,817 polling units. The results and ballot boxes were sent to district offices which then combined the results sent from the stations in their jurisdiction and sent them to the head office of the BMA in Din Daeng.

Prime Minister Prayut Chan-o-cha, cabinet ministers, other politicians and the gubernatorial candidates cast their votes yesterday morning. As voting passed the half-way mark at noon, only some minor offences had been reported, said Pol Lt Gen Sarawut Karnpanich, an assistant to the national police chief in charge of security for the election.