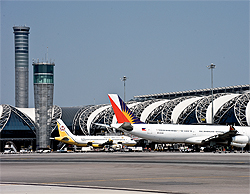 The simultaneous breakdown of both the main and back-up power supplies paralysed the radar system which guides flights through Suvarnabhumi International Airport for an hour.

A total of 49 aircraft were affected - 21 take-offs and 15 landings were delayed, while 13 flights were rerouted or returned to their departure point.

The radar breakdown may be the longest in the world for 45 years, and airline executives and pilots yesterday called the incident "inexcusable".

"Our reputation has been tainted and trust in the reliability of the Thai system has diminished to a certain extent," said Marisa Pongpattanapun, chairwoman of Airline Operators Committee (AOC), a coalition of global airline managers at Suvarnabhumi.

A senior Thai Airways (THAI) pilot with 36 years of international experience and more than 20,000 flight hours said rival airports in the region could benefit from the malfunction, which lasted from 6.14pm to 7.12pm.

He said passengers affected by Thursday's delays may well choose to travel to or through different airports in future.

The senior THAI pilot said he had experienced radar system breakdowns elsewhere in the world, but that the disruptions caused by those incidents only lasted a matter of minutes.

Ms Marisa said airlines are counting the cost of the incident, which frustrated thousands of passengers.

She said the airlines will seek compensation from Aeronautical Radio of Thailand Ltd (Aerothai), the air navigation service provider operating under the Transport Ministry.

The Board of Airline Representatives Business Association, also known as Bar, will act on the behalf of its affected member airlines to seek compensation from Aerothai, Ms Marisa said.

Costs incurred by the delays include the use of extra fuel by flights held up in-air and accommodating affected passengers.

The incident further inconvenienced international carriers which have been struggling since June 11 to lessen the impacts of the 60-day maintenance shutdown of one of Suvarnabhumi's two runways.

Aerothai president Prajak Sajjasophon said yesterday the company has yet to receive any claims for compensation from affected parties.

"I think they understand the case and we can discuss the whole matter with them," he said.

Mr Prajak played down suggestions that Thailand's reputation would be spoiled by the incident, saying Aerothai has done everything possible to lessen the impacts on visitors and most importantly ensuring maximum safety for air traffic during the blackout period.

He noted that Aerothai successfully employed radio communication during the radar down-time period to direct five aircraft to safe landings at Suvarnabhumi.

Mr Prajak insisted that the company has followed inspection and maintenance guidelines.

Aerothai's current power supply system has been in use for six years of its seven-year lifespan.

A 20-million-baht upgrade is set to be put into operation from August of this year.

The upgrade will be an additional uninterruptible power supply (UPS) system that will be independent of the existing UPS source.

This should ensure a secondary power source should a similar failure occur again.

Asked why aircraft approaching a Suvarnabhumi landing were diverted to alternate airports as far away as Kuala Lumpur in Malaysia and Siem Reap in Cambodia and not sent to Bangkok's Don Mueang domestic airport, Mr Prajack said Don Mueang relies on the same radar system Aerothai provides for Suvarnabhumi.

The Transport Ministry yesterday ordered the creation of a committee, headed by permanent secretary Silapachai Jarukasemrat, to complete an investigation into the incident within 15 days.

Suvarnabhumi International Airport, code-named BKK, is among the five busiest airports in the Asia-Pacific region.

When it opened in September 2006, it was designed to handle 45 million passengers a year, but last year it processed 47.2 million.

Passenger numbers are expected to soar further to 51 million this year.