Few of the red-shirt leaders facing revocation of their bail are likely to be sent to prison based on the evidence presented so far, the Criminal Court's chief judge suggests. 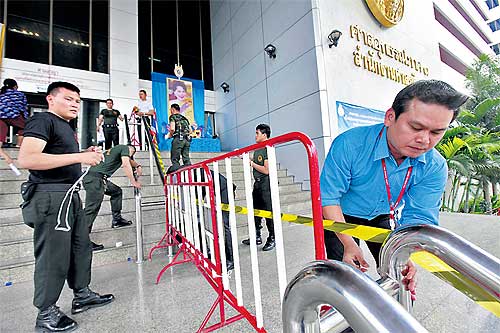 Barriers are set up around the Criminal Court to prevent red-shirt supporters from entering the compound. The bail revocation hearing for red-shirt leaders proceeds today, and thousands of protesters are expected. THITIWANNAMONTHA

The hearing is likely to be wrapped up by early afternoon, and a ruling issued before the end of the day, according to Criminal Court chief judge Thawee Prachuablarp.

Judging from the evidence presented so far to back the petitions, only a few of the red-shirt leaders might be found to have violated their bail conditions, Mr Thawee said.

Vorachai Hema, a Pheu Thai MP and red-shirt leader, said yesterday that an estimated 5,000-10,000 red shirts are expected to turn up at the court to give moral support to the defendants.

He said the red shirts have the legal right to protest but they will comply with the court's request that no loudspeakers be used during the rally.

Mr Thawee insisted the court has not predetermined which of the 24 defendants will have their bail revoked. The chief judge said all decisions will be based on evidence and testimony, and decisions made on a case-by-case basis.

Red-shirt lawyer Winyat Chartmontri said four Pheu Thai MPs who are named as defendants will show up to defend themselves in court, despite the fact they could claim parliamentary immunity and exempt themselves from the process.

He said all the defendants will respect the court's decisions.

Mr Thawee said the judges reviewing the bail revocation issue are the same justices in charge of the terrorism cases against the red-shirt leaders.

The judges will ask the defendants to respond to allegations that they have breached their bail conditions, he said.

Mr Thawee said the court has worked closely with police and corrections officials to tighten security ahead of the rulings.

Police have recommended that red-shirt supporters not be allowed to enter the compound.

"We decided to heed the police suggestion. They are better at handling large crowds," he said.

The chief judge said the defendants will be able to bring a limited number of aides to the courtroom. A total of 35 people will be allowed to enter, including the complainants, Mr Thawee said.

Defendants whose bail is revoked will be immediately sent to Bangkok Remand Prison. The process will be swift and trouble-free, he added. The judge called on red-shirt supporters to refrain from gathering at the court and follow the bail hearing via the media to help keep disruptions to a minimum.

He added that court officials are allowed to take leave today if they have safety concerns or find it inconvenient to get to work.

Mr Jatuporn and 24 other red-shirt leaders have been released on bail on terrorism charges related to violence during the protests against Abhisit Vejjajiva's government in 2010.

The court is considering a request by the Office of the Constitution Court for the red-shirt leaders' bail to be revoked.

The office made the request after the defendants criticised the charter court judges' ruling to suspend parliament's third reading of the charter amendment bill.

Red-shirt co-leader Yotwarit Chuklom, better known as Jeng Dokjik, said he is prepared to defend himself in court. It is widely speculated that Mr Yotwarit could have his bail revoked.

He is accused of distributing the phone numbers of charter court judges and their families and encouraging his supporters to make harassing phone calls while the Constitution Court was deliberating its ruling on the charter amendment case.

"I think the court will give me justice. I have no intent to provoke violence or stir up chaos," Mr Yotwarit said.

"I have apologised and asked red shirts not to cause trouble. I think they will show me mercy."