The order takes effect retroactively from the date when Mr Abhisit applied for a job as a lecturer at Chulachomklao Royal Military Academy in 1987. 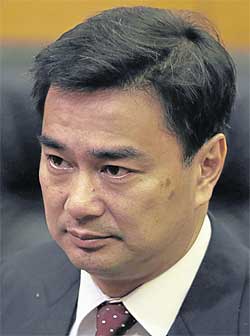 Abhisit: Invited to prove his innocence

The ministry based its decision on a defence panel ruling earlier this month which found Mr Abhisit had used a fraudulent document when he applied for the lecturing job, a position that exempted him from military conscription.

However, the ministry said it will take no further punitive actions, at least for the time being.

Explaining the decision, Defence Minister Sukumpol Suwanatat compared the case with having a necklace stolen.

"My necklace was stolen. Twenty years later, I find my necklace and take it back, but do not take any action against the thief. Am I in the wrong?" he said.

The ministry set up a panel to investigate Mr Abhisit's case after the Pheu Thai Party lodged a complaint with the Office of the Ombudsman, which then forwarded the matter to the ministry's attention.

The panel proposed last month that Mr Abhisit be stripped of his military rank. The Democrat Party leader claimed the move was politically motivated as it came in the lead-up to the censure debate.

The former prime minister has denied any wrongdoing, insisting he did not falsify his application. He cited a 2010 National Anti-Corruption Commission ruling which found that he had not used a fraudulent document.

"Please do it. Do it anywhere you want to. Doing it through television is also fine," he said.

The ministry has not specifically revoked Mr Abhisit's rank of acting sub-lieutenant as the panel recommended, but his dismissal effectively means that he no longer holds any military rank.

Because Mr Abhisit has filed a petition with the Administrative Court on the issue, the ministry will not act further until the judge hands down a ruling, ACM Sukumpol said.

As for the possibly of a move to push for the withdrawal of Mr Abhisit's MP status following his military dismissal, ACM Sukumpol simply said: "Let politics handle it."