Hopefuls told: Get on your bikes
Thailand
Politics

Hopefuls told: Get on your bikes

A network of cyclists yesterday applied pressure on key candidates in the Bangkok governor election to make a commitment to promote cycling as a practical mode of city transportation. 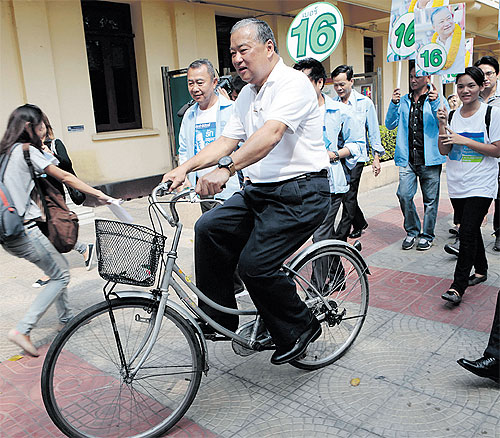 The event was part of "Vote Bike 2013" campaign, launched by the Green World Foundation, Bangkok Bicycle Campaign (BBC) and the Thai Cycling for Health Association. The proposal calls for improved public transportation and infrastructure for commuters as city traffic has worsened.

The network demanded a safe and practical cycling network and facilities throughout the city; car-free zones for pedestrians and cyclists and more parks. 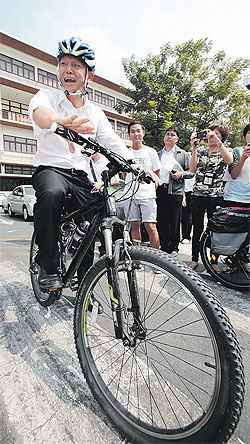 "None of the candidates has a clear vision and commitment for the city. We've prepared the 'homework' for them to debate their policies and implement them later," Green World Foundation secretary-general Saranarat Kanjanavanit said.

The proposal stems from a survey and research at Bike Fest 2012 and BCC's Facebook page.

The new governor and his team must coordinate with police to improve bike lanes and help cyclists while joining with the national government to push for a reduction on bicycle import taxes, the network said.

After receiving the proposals from the network, MR Sukumbhand yesterday vowed to improve facilities for cyclists as well as improve public transport in the capital.

He said during his tenure as Bangkok governor he had created 28 bicycle routes with a combined length of 200km. He also changed more than 650 sewer lids on city roads following complaints from cyclists that the lids put them at risk of an accident. MR Sukhumbhand, who is running for his second term of office, said he would create another 30 bicycle routes if he is re-elected in the March 3 poll.

Every new road would have bicycle lanes, he said.

Pol Gen Pongsapat also pledged to promote cycling as an alternate mode of transport if he won the race for governor.

Meanwhile, a survey released yesterday found that most Bangkok voters will make their voting choices based on policies rather than the individual or the party backing them. Dusit Poll surveyed 1,139 eligible voters in Bangkok from Jan 20-25, asking them what the key factor would be in their voting decision.