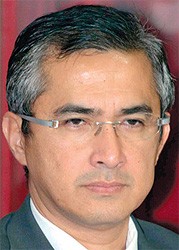 The Appeals Court said it agreed with the Criminal Court that Mr Korkaew showed no regret over his violation of the court's bail conditions in threatening the judges of the Constitution Court. There was no assurance that he would not break the conditions again if he was granted bail, the court said.

The red-shirt co-leader's lawyers appealed after the Criminal Court on April 22 denied his request to extend his temporary release, granted so he could attend a session of parliament, and sent him back to Laksi prison.

The Pheu Thai MP will be allowed out to attend parliamentary meetings when the next session opens, because he will then again have parliamentary immunity from arrest. The parliament is in recess and is expected to reconvene in late July.

Mr Korkaew is a defendant in a terrorism case related to the red-shirt protests in 2010.