Fresh grenade explosions near the Victory Monument protest site that wounded 28 people on Sunday are the latest sign of a serious escalation of violence that may result in the invocation of the emergency decree. 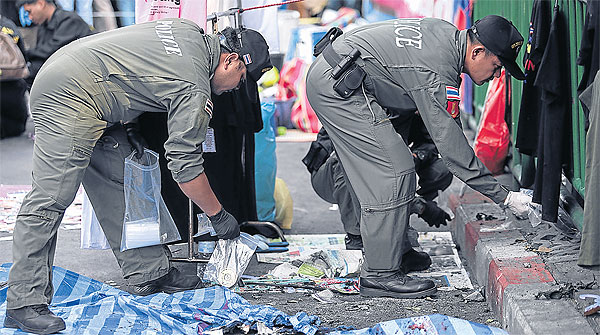 The attacks come hours after a protest security guard at a Lat Phrao rally base was shot and wounded.

On Friday, a grenade attack on a protest march in the Banthat Thong area killed one protester and injured 39 others.

National Security Council (NSC) secretary-general Paradorn Pattanatabut said there is great risk that advance voting scheduled for next Sunday and the Feb 2 election might not proceed smoothly.

He said the violence is expected to escalate before the advance voting is undertaken, aimed at derailing the Feb 2 poll.

The NSC chief said the caretaker government has prepared an emergency decree, apart from the tougher enforcement measures under Internal Security Act which have been declared in Bangkok and nearby areas, to handle the situation. But the decree won't be necessary until the seizure of state offices actually happens and state officials are unable to work.

If the situation becomes more violent and spirals out of control, the government might consider invoking the executive decree for the administration of the country in an emergency situation.

If it was enforced, it would not be used as a tool to crack down on protesters but to improve security officers' ability to control the situation, he said.

Lt Gen Paradorn said the blast at the Victory Monument worries the Centre for the Administration of Peace and Order (Capo). 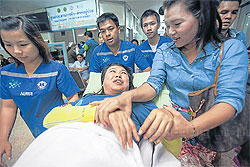 Sithinee Huangnak,a reporter forPost Today newspaper, has been declared safe after sustaining an injury in her left hip from a grenade blast while covering the protest at the Victory Monument. PATTARAPONG CHATPATTARASILL

He said "third hand" elements are penetrating every protest site while the rallies of the People's Democratic Reform Committee (PDRC) are affecting citizens.

However, he said authorities will intensify security to prevent untoward incidents.

Thaworn Senneam, a former Democrat MP and core PDRC co-leader in charge at the Victory Monument rally site, said a man yesterday threw an explosive device near a press centre tent behind the rally stage and ran off.

The suspect was chased by security guards and protesters, prompting him to toss another bomb.

But the group continued to try to catch him and the man fired a shot at them, leaving at least one person injured.

He fled on a motorcycle driven by another man, heading toward Tuek Chai intersection.

Mr Thaworn said he believed he was the target of the grenade attack. The device exploded only 20m away from where he was standing.

Pol Col Khamthon Ouicharoen, an explosive ordnance disposal specialist attached to the Patrol and Special Operations Division, said one of the grenades was initially identified as an RGD-5 type, the same as the one used in the Banthat Thong blast.

He said police were looking for a spent bullet after witnesses told them the suspect fired a shot at the guards who were pursuing him.

Deputy national police chief Worapong Chiwpreecha said six suspects were involved in the blast. One witness gave police a detailed account, which was likely to lead to an arrest.

PDRC secretary-general Suthep Thaugsuban told protesters the attacks would only strengthen their resolve.

"We've lost three [fellow protesters]. But we won't lose any more," he said.

He criticised the indiscriminate attacks on innocent protesters at rally sites and during their protest walkabout.

"We must unite in our fight and we must take a tougher stand," Mr Suthep added.

The protesters have been carrying out a shutdown operation in Bangkok for a week.

They have blockaded state agencies but some offices have moved. "This week we need to shut all of them down," he said.

Col Winthai Suwaree, an army spokesman, said army chief Gen Prayuth Chan-ocha is concerned about the situation and has asked the national police chief to speed up his investigation.

Gen Prayuth has also asked the army to work with Capo in rearranging checkpoints to boost security, he said.

One of the 28 people wounded in yesterday's grenade explosions is Sithinee Huangnak, a reporter for Post Today, the Bangkok Post's sister newspaper, who was admitted to nearby Ratchawithi Hospital. Sithinee was later transferred to Phyathai Hospital 2 hospital.

Sithinee said she was looking for a place to write a news report when the blast took place. She found the backstage tent where VIPs were staying and decided to leave it out of concerns that it might not be a safe place.

As she was walking away, she heard something drop and turned to look. She ran for cover when she realised it was a grenade. She felt a sharp pain in her left hip as the bomb went off.

"I've been careful when covering protests. I usually look for places where I can seek cover. It is the first serious incident for me. Previously it was just tear gas," she said.

Meanwhile, Sunisa Lertphakhawat, a government spokeswoman, said the government would pay compensation to protesters who were injured in violence on the same criteria that it was paid to the red shirts. 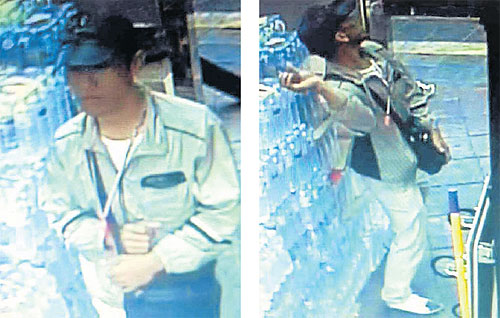 Photos taken from CCTV footage show the bombing suspect who threw hand grenades in the Victory Monument rally area. The photos posted on the Facebook page of the Criminal Reporters and Photographers Association of Thailand were earlier released by police.