The caretaker government insisted on Tuesday that the general election will go ahead as planned on Sunday, despite Election Commission (EC) warnings over potential chaos and violence on polling day. 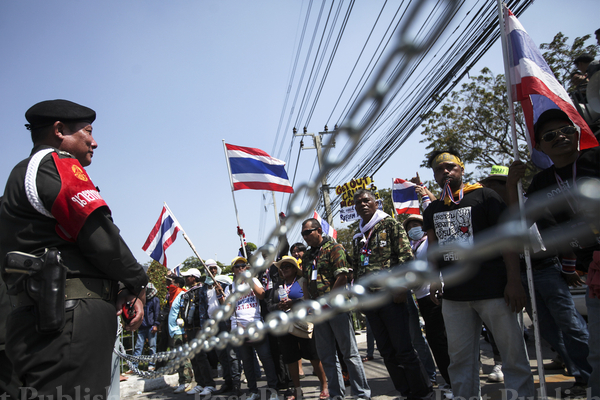 Anti-government protesters rallied outside the Army Club on Vibhavadi Rangsit Road on Tuesday as caretaker Prime Minister held a cabinet meeting followed by talks with the Election Commission. (Photo by Patipat Janthong)

Caretaker Deputy Prime Minister Pongthep Thepkanchana, who is also a legal expert for the Pheu Thai Party, confirmed after a three-hour meeting at the Army Club that the poll date would not be deferred.

All five election commissioners, led by chairman Supachai Somcharoen, had gone to the meeting with the hope of convincing caretaker Prime Minister Yingluck Shinawatra to postpone the Feb 2 election due to concerns about escalating protest violence.

Violence on advance voting day last Sunday underlined the EC's fears and the agency said it expected more trouble when people go to cast their votes on the main election day, since People's Democratic Reform Committee (PDRC) protesters have promised to disrupt the polls.

Sutin Tharatin, a core leader of the People's Democratic Force to Overthrow Thaksinism, was shot dead in a clash outside a polling station in Bang Na, where protesters had gathered to block the advance vote. Anti-government protestors also blocked access to polling stations in 83 constituencies nationwide, according to the EC.

But Mr Pongthen argued that there was no indication that postponing the election would end rallies by the PDRC, which are being led by former Democrat MP Suthep Thaugsuban. 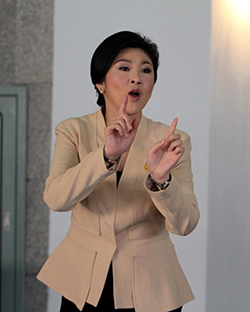 Caretaker Prime Minister Yingluck Shinawatra emerges from talks with the Election Commission. She refused to talk to reporters. (Photo by Chanat Katanyu)

Election commissioner Somchai Srisuthiyakorn told a news conference that the caretaker government was not convinced by the EC's warnings, so the agency would go ahead and try and organise the Feb 2 vote as best it could.

The EC will try to prevent violence and will hold second elections for voters in areas where protesters disrupt the polls or where candidates have been unable to register, Mr Somchai added.

Candidate registration was blocked earlier this month in 28 constituencies in eight southern provinces strongly loyal to the opposition Democrat Party, which is boycotting the election.

Ms Yingluck held talks with the EC chairman Supachai Somcharoen for 10 minutes before calling a meeting with all members of the commission.

Mr Somchai said before the meeting that the planned election should be postponed for between three and four months to allow political opponents enough time to settle their conflict. During the cooling off period, all sides of the political divide could hold talks to find a solution acceptable to all, he added.

As Ms Yingluck held talks on the fate of the polls, an anti-government protester was meanwhile wounded by a gunshot outside the Army Club venue for the negotiations.

About 100 PDRC members were rallying outside the club on Vibhavadi Rangsit Road when the incident occurred, BlueSky TV reported.

A Bangkok Post reporter confirmed that shots were heard about 2.40pm and a demonstrator was hit in the leg by a bullet.

The injured protester was sent to Ramathibodi Hospital, BlueSky reported, adding that the gunman was arrested by protest guards and beaten while trying to escape vengeful protesters, before being sent to Rajavithi Hospital.