Supporters of Sunday's general election are converging on Bangkok and gathering in the far South to counter anti-government protesters' efforts to derail the poll, raising fears of clashes between the two sides. 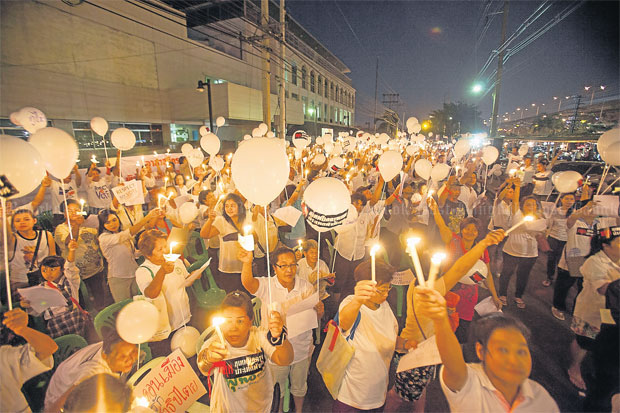 Don Muang residents dressed in white gather at the district office on Friday to hold candles and release balloons as part of their effort to protect ballot boxes and ensure the election runs smoothly. (Photo by Pattarapong Chatpattarasill)

District chief Suwit Rasamipat said the group turned up and asked to camp out on the premises.

About 300 people also showed up at Don Muang district office and vowed to stay there until the election ends, district chief Phumipat Damrongkiattisak said.

Although voting is not due to take place at the district office, the group wants to stay there to guard against anyone who may obstruct the delivery of ballot boxes which will be distributed to poll stations early tomorrow morning, he said.

The group at Don Muang district office is reportedly led by Wuthipong Kachathamkun, better known as Kotee, leader of the red-shirt community radio group based in Pathum Thani.

Meanwhile, more than 100 residents in the far South converged on Pattani Central Mosque yesterday to oppose efforts to derail the poll.

Abdullah Ma-sae, deputy chief of Pattani provincial administration organisation (PAO), led a group of village headmen, local politicians and residents to read out a statement in protest against the PDRC's efforts to violate people's rights and freedoms.

The group also denounced the PDRC for blockading the Hat Yai post office in Songkhla to prevent ballot papers from being delivered to polling stations in Songkhla, Pattani, Yala, Narathiwat and Satun provinces.

The PDRC are violating people's rights under the democratic system, Mr Abdullah said.

Its supporters are narrowed-minded without concern for other people's voices and they were attempting to interfere with the destiny of the people in the region, he said.

Mr Abdullah said the local group called on the PDRC, Songkhla residents and concerned agencies to release the voting papers so that the election can go ahead.

The group will not sit idly by if there is any attempt to obstruct the poll, he said.

If the Election Commission (EC) is unable to solve the problem, the group will ramp up the protest, he said.

The gathering followed the assembly of people from Yala, Pattani, Narathiwat and four districts of Songkhla at the Otop centre in Pattani's Nong Chik district on Thursday night.

Officials must also strictly enforce the law to deal with people who obstruct the democratic system, he said.

Mr Buerahanhuddin said the group will call another gathering today at the Pattani Central Mosque to submit a letter to the EC and discuss its next move.

He insisted the election represents the best way out of the country's political crisis.

In Phrae, about 200 pro-government United Front for Democracy Against Dictatorship (UDD) demonstrators yesterday gathered near the provincial hall to show support for the election.

The group read out a statement condemning the PDRC and then dispersed.