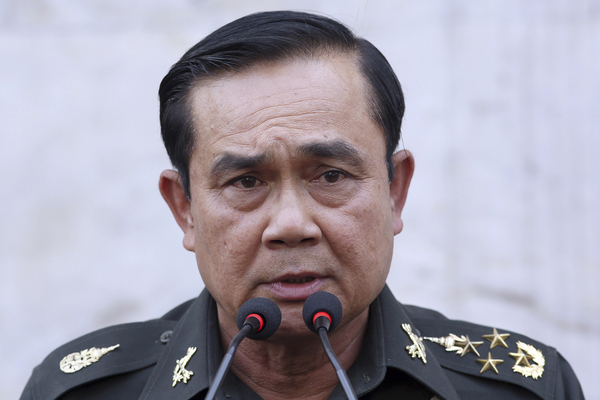 After three bombings and other attacks over four days targetting the Pathumwan rally sites of the People's Democratic Reform Committee - including the lethal attack on a rally at a market in Trat on Saturday and a fatal grenade explosion at Ratchaprasong on Sunday - the army leader appeared on the army-run television station to make his position clear.

''I strongly hope to see the problem resolved by peaceful means and to see no more conflict,'' Gen Prayuth said in a statement he read out on the television staion.

''What will be urgently undertaken is to see that all sides hold talks'' to prevent further violence that would severely damage the country, he added.

It was the first time the powerful national army commander-in-chief has taken a firm position since the country showed signs of escalating into further political violence.

The situation over the past few days has led to speculation the army might once again roll out the tanks and step in, after standing back and allowing the police to ineffectively enforce the Centre for Maintaining Peace and Order's efforts to ensure security.

Gen Prayuth made clear that the military option is not a solution to the crisis. It could be a setback as violence could increase if there was military intervention and the constitution could be torn down.

''If we use the wrong means, or the full use of military force, how can we ensure that the situation will end peacefully?'' he said.

''The army is never afraid of performing our duty but we are concerned about more losses and injuries to people because many sides do not understand and oppose the army,'' he added.

He said the army, police and civil servants are not taking sides and that the army will not sit idly and watching the attackers walk free.

He urged the caretaker goverment to quickly take action against those responsible for the attacks and warned that the present situatin was more complicated than the protest rally by the red-shirts in 2010 because of the many factions involved.

Gen Prayuth said at there is a link between the ongoing violence and the protest rally in 2010, adding that more evidence and information was being gathered to verify this.

The army chief did not elaborate on this comment. He was apparently referring to the men in black who launched lethal attacks on soldiers and supporters of the Democrat Party-led government at the time of the protests in 2010.