Tida steps down as red shirts gear up for fight

AYUTTHAYA: United Front for Democracy Against Dictatorship (UDD) chairwoman Tida Tawornseth has ceded her post to core leader Jatuporn Promphan in what is seen as the prelude to a showdown with anti-government groups. 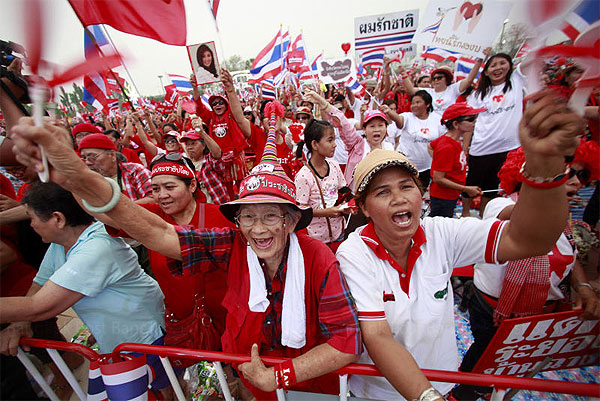 Mrs Tida announced she was stepping down from her post at the red-shirt group's mass rally at Ayutthaya provincial stadium yesterday.

Mr Jatuporn, who led the red-shirt protest against the Democrat-led government in 2010, was appointed as her replacement to lead the UDD through a political situation he described as "critical".

"The way to fight via the parliamentary system has been closed. Now we will fight to the end and we will not lose," Mrs Tida said.

After staging a rally in Ayutthaya to mobilise support from people in the Central Plains yesterday, the UDD vowed to gather again in Pattaya next weekend.

Red shirts from the central provinces rallied in Ayutthaya to express opposition to the Constitution Court and other independent organisations whom they view as not acting impartially.

Nisit Sintuphrai led a group of key red-shirt figures on a boat trip around the island where the old capital is located in promotion of the event.

The rallies are for UDD members to show support for embattled caretaker Prime Minister Yingluck Shinawatra, who they see as under attack by the Constitution Court and other organisations. Mr Nisit has accused them of lacking neutrality.

The UDD and Pheu Thai Party are at odds with independent institutions, including the National Anti-Corruption Commission, which has taken action against Ms Yingluck for dereliction of duty in the rice-pledging scheme.

The UDD rally coincided with the move of seven independent organisations which have jointly proposed solutions to the political impasse.

Mrs Tida said the rally in the Central Plains would encourage people looking for justice to join the movement.

Ayutthaya is an appropriate province to mobilise supporters, since the province is not far from Bangkok and is central enough to coordinate with UDD leaders from other regions, she added.

She said the UDD would organise the rally in Pattaya next week to mobilise supporters from the Eastern provinces.

This is because the caretaker government was not allowed to enforce laws to control them, she said.

As a result, the UDD needs to make its own moves in support of the government, but the group intends to avoid confrontation with their opponents.

Yesterday’s rally follows similar events in Udon Thani and Khon Kaen two weeks ago and a meeting in Chiang Mai last weekend to rally support for Ms Yingluck and press for the general election to be completed.