Police are going after Wuthipong "Ko Tee" Kachathamkul after the Criminal Court on Friday approved an arrest warrant for the red-shirt hardman on charges of lese majeste. 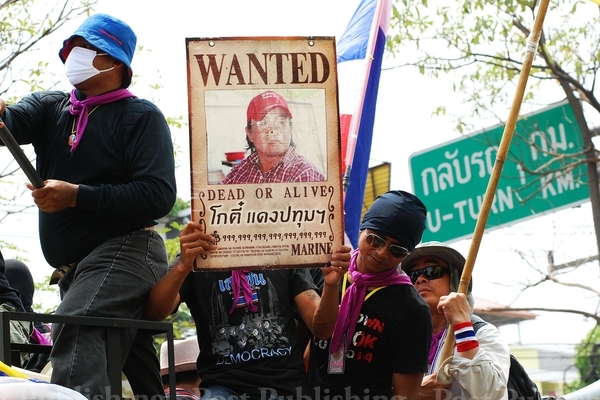 Police expressed confidence that Ko Tee was still in the country despite claims from some that he enjoys protection from a senior officer and might already have fled Thailand.

The court said it had thoroughly considered the evidence submitted by the Crime Suppression Division (CSD) and decided to approve the warrant.

CSD deputy commander Prasopchok Prommoon said the evidence included a video clip, including images and voices, of Mr Wuthipong in an interview, along with accounts from witnesses who are legal experts and 10 other people. There was a substantial case for the police to seek the warrant, he added.

Mr Wuthipong is being sought because of remarks made in an interview with Vice, a US-based multimedia outlet. The interview was posted on YouTube on Wednesday before being blocked in Thailand hours later.

He could be jailed from three to 15 years if he is found guilty of the charges. The statute of limitations in the case is 15 years.

The red-shirt leader could face another charge for violating the Computer Crime Act, the CSD deputy chief said.

Increasingly, the Computer Crime Act is being used in conjunction with Section 112 of the Criminal Code, the lese majeste law, since the offending comments in such cases tend to be disseminated online.

Investigators armed with the warrant on Friday searched Mr Wuthipong house and the surrounding area in Kukot in Lam Luk Ka district of Pathum Thani province north of Bangkok. The CSD did not give details on the mission.

Ko Tee has not been seen in public since the interview amid speculation that he could have slipped out of the country already.

But Pol Col Prasopchok said immigration police had found no evidence that the accused had gone abroad through the checkpoints manned by the Immigration Bureau.

The Centre for the Administration of Peace and Order on Friday renewed a warning to the public that anyone distributing or forwarding the video would face criminal charges.

One of the most belligerent of the red-shirt activists, Ko Tee has developed a reputation as a loose cannon. He has said that his group operates on its own and is not loyal to the United Front for Democracy against Dictatorship.

The Ko Tee interview prompted the caretaker government and the Royal Thai Army to press for police to urgently handle the issue.

Army chief Prayuth Chan-ocha called for quick action by the police as the interview had stirred public anger.

"Everybody should calm down. He has already made the public angry. I don't think he could stay if he doesn't turn himself in to defend himself under the judicial process," Gen Prayuth said.

Also facing an arrest warrant on lese majeste charges is Ekapop Luara, or Tang Archiva. He is believed to have escaped from Thailand.

A People's Democratic Reform Committee faction led by Luang Pu Buddha Isara held a rally at Kukot police station and offered a cash reward of 500,000 baht for anybody who could arrest or locate the suspect.