The charter leaves no room for interpretation over who can call for the Senate to be reconvened after a House dissolution. That person is caretaker Prime Minister Yingluck Shinawatra, according to former Senate speaker, legal expert and Council of State member Meechai Ruchupan. 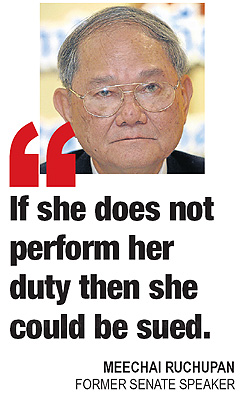 “The prime minister has the authority and the duty,” he says.

Mr Meechai does not see eye-to-eye with colleagues who recently told the cabinet secretariat that the parliament president has the authority to seek a royal decree for the Senate to be convened.

In an interview with the Bangkok Post, Mr Meechai says Section 132 of the constitution allows the Senate to hold a meeting after a House dissolution if and when an impeachment request is pending. But since there is currently no parliament president, he argues that it falls to the caretaker premier to ask for a decree to sanction an extraordinary session of the Upper House.

“It is the duty of the prime minister. If she does not perform her duty then she could be sued,’’ Mr Meechai says.

The Senate wants to convene a session on April 18 to consider the National Anti-Corruption Commission’s (NACC) proposal that suspended Senate Speaker Nikhom Wairatpanich and ex-parliament president Somsak Kiatsuranon be impeached. According to the NACC’s 20-day deadline, the Senate must hold a session to proceed with the impeachment by April 18.

Critics believe the government is trying to delay the session so the 20-day deadline lapses and a new batch of elected senators take office.

The Election Commission has endorsed only 58 out of 77 senators-elect. Under the constitution, the Senate needs at least 95% of all 150 members, or 142 members, to perform its duties. At least 70 winners need to be endorsed to work with 73 appointed senators. Newly elected senators are expected to assume office early next month.

Mr Meechai insists that a Senate session must be called to consider the impeachment request and warns Ms Yingluck may face fresh dereliction of duty charges if she does not comply with the charter. He urges her to consult experts on the charter for legal advice.

“When you ask them for advice, don’t tell them what you want to hear. You should ask a wide range of people and think hard about what they say. You don’t have to follow everybody’s advice. You should consider their advice and its implications for you,” he says.

According to Mr Meechai, deputy Senate Speaker Surachai Liangboonlertchai — who is acting Senate speaker — is not authorised to convene a session.

The Constitutional Court may be asked to rule on the matter if the controversy persists, he says. “The Senate has to perform its duty. It is the only existing legislator,” he adds.

Sen Surachai said yesterday that he has asked the cabinet secretariat to reconsider the issue. He insisted that Section 132 allows the Senate to convene a session to consider an impeachment request. He argues that there is currently no parliament and no parliament president, since Ms Yingluck dissolved the House.

The acting Senate speaker admitted there would be no penalty if the Senate could not convene a session to consider the impeachment, but says the Senate will do its best to avoid being accused of dereliction of duty.

“The impeachment should be considered by newly elected senators who have full authority. The 20-day deadline claim is a Senate meeting regulation, it isn’t a charter requirement,” he said.

Mr Prompong’s comments came as a group of so-called democracy defenders yesterday initiated a campaign to oust Sen Surachai. The group accused the deputy Senate speaker of overstepping his authority by asking the prime minister to seek a royal decree to convene a Senate session.

Regarding separate attempts to impeach Ms Yingluck, Mr Meechai says the prime minister should not argue whether the Constitutional Court has the authority to rule on her status, but rather clarify her alleged breach of the constitution.

“Don’t act like a criminal arrested by the police. You have to prove you did nothing wrong, so an arrest cannot be made against you,’’ he says.