About 1,300 soldiers and police were dispatched to the Victory Monument on Thursday to prevent another demonstration against the coup. 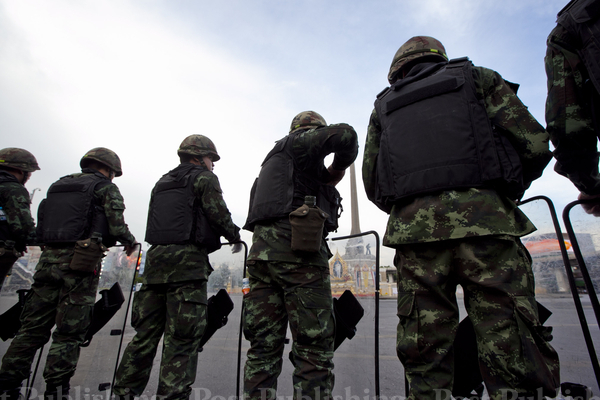 About 1,300 soldiers and police forces weare deployed at the Victory Monument on Thursday to counter an anti-coup protest. Most returned to the barracks after no sign of rallies. (Photo by Thiti Wannamontha) 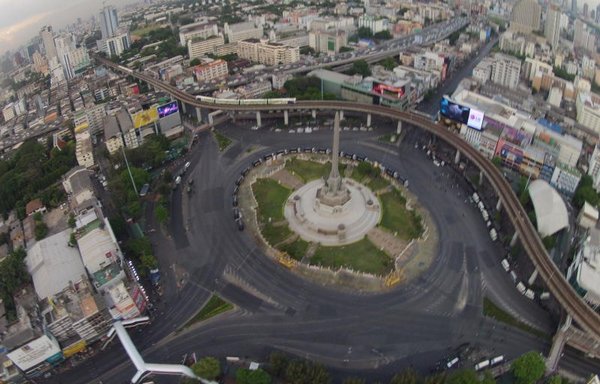 Roads around the Victory Monument were cleared of traffic at Thursday evening rush hour as troops and police moved in for a huge show of force that blocked a planned anti-coup demonstration. (Photo by Surapol Promsaka Na Sakolnakorn)

After several rallies that involved scuffles since the country came under military control on May 22, the National Council for Peace and Order (NCPO) on Thursday decided to take the issue seriously by closing all roads to the monument for about three hours from 3.30pm with troops and police in anti-riot gear stationed in the area.

Another 300 security forces were sent to the Bangkok Art and Culture Centre amid reports that a rally would shift to the Pathumwan area.

The Victory Monument has been a protest site over the past few days. 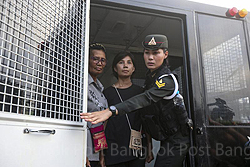 Two women are taken into a police van after being arrested for showing anti-coup signs at the Victory Monument on Thursday. (EPA photo) 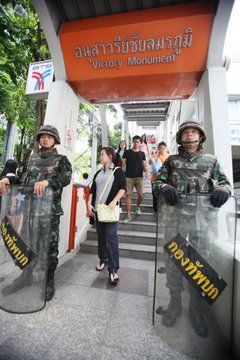 Troops even blocked off the entrance to the BTS as part of their shutdown operation. Photo by Apichit Jinakul)

''I would like to ask those law violators why they are doing this,'' he said, referring to the rallies. ''Protests are a symbol showing opposition (to the coup). But why don't they let the NCPO work and solve the problems?''

Only a handful of people turned up at the monument. Two women and a foreigner believed to be a Belgian were whisked away to the Army Auditorium. Their names are not known.

The NCPO sent a signal earlier on Thursday that the junta no longer would tolerate rallies.

Council spokesman Winthai Suwaree called for the end of the protests and did not rule out strong measures against demonstrators.

He urged relatives of the protesters to convince them to end their action.

''Please bear in mind that the country is not in a normal situation. Strict measures are being enforced to restore law and order,'' said Col Winthai, who is the army deputy spokesman. ''Let me reiterate that a gathering of more than five people is banned now.''

Using tear gas is one of the steps to end protests, he added.

The Crime Suppression Division (CSD) detained 11 protesters gathering at Pathumwan intersection, the Victory Monument and other places on May 25. They were arrested by military police on that day. Another one was detained on Wednesday.

The CSD said seven demonstrators had been released, leaving five in jail.

One of the detainees is Sgt Maj 1 Apichart Pongsawat, who will face another charge of lese majeste having been arrested before joining a rally, the police said. The soldier has denied the charge. 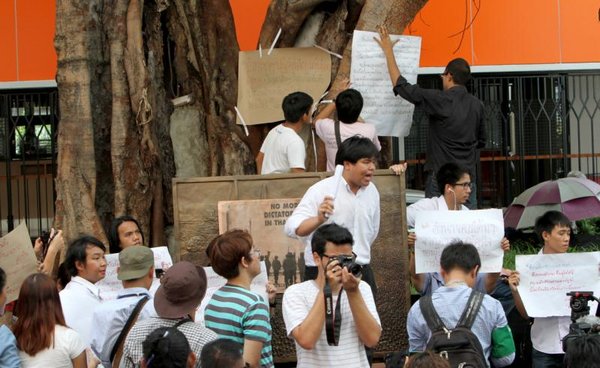 Members of the Thai Student Centre for Democracy gathered Thursday at Lan Pho, inside Thammasat University's Tha Prachan campus, to condemn the military coup, demand the junta step aside and a reinstatement of the 1997 constitution. (Photo by Apichart Jinakul)