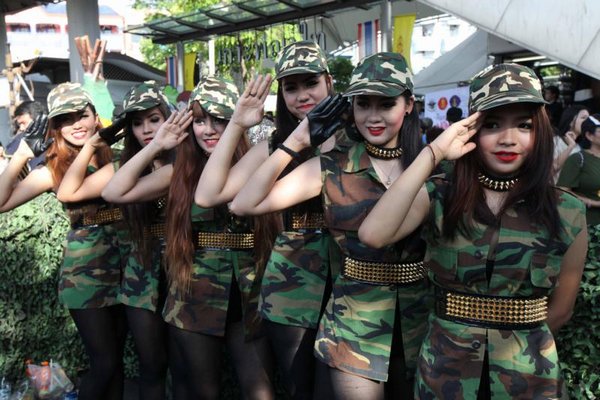 Dancers clad in camouflage outfits and short skirts posed for photos and greeted the public before performing on stage during the "Return Happiness to the Public" event at Victory Monument Wednesday. The National Council for Peace and Order organised the activity, including a free mobile medical service. (Photo by Thiti Wannamontha)

The task force is committed to "winning the information campaign" against the anti-coup movement and bolstering the National Council for Peace and Order's image, especially on social media, the source said.

While the NCPO claims it has secured cooperation from the mainstream media in putting across its message, it has yet to reach out to the online community.

The overt operations will include a wide range of activities such as "Return Happiness to the Public" entertainment events, community services, and regular press briefings to clarify the political situation, the source said.

The entertainment and the community services will be carried out primarily in areas which have played host to fierce political conflict.

The operations will also include a launch of official Facebook pages and Twitter accounts for several army agencies to allow them to communicate with the public.

The covert operations, according to the source, will involve ways to prevent the spread of false information.

"The information campaign was introduced about two years ago and has largely involved counter-intelligence operations in that time," the source said.

"Based on the US approach, IO is carried out by operations officers rather than civilian affairs officers."

The NCPO's IO task force, headed by an army colonel, comprises army officers largely from the Directorate of Operations and civilian affairs staff, the source said.

According to the source, Gen Prayuth has had personal intelligence and information operation teams working for some time, but has decided to set up a formal task force after seizing power on May 22.

The source also noted that Gen Prayuth has expressed concerns about the NCPO's public relations efforts, and has urged other units, not just civilian affairs officers, to engage more with the public.

Meanwhile, the recent online circulation of a video clip is also suspected to be part of the NCPO's information operation.

The clip, uploaded to YouTube by "Ice Zy" on Tuesday, shows a uniformed soldier countering criticism that soldiers belong in the far South, not in Bangkok.

The three-minute clip, entitled "Taharn Kor Mee Huajai" (Soldiers have a heart too), shows the soldier defending the coup, insisting it has improved the country's situation.

He said soldiers guarding the capital have never responded with force to people who criticised them or pelted them with rocks and water bottles. "A salary of a few thousand baht compared to a person's life … it's not worth it. We do what we do because it's our duty," the soldier said.