Representatives of the Journalists Association of Thailand and three other media groups demanded the National Council for Peace and Order (NCPO) rescind coup orders No.97 and No.103, and Section 44 of the interim constitution. (Photo by Narupon Hinshiranan)

Four major media organisations marked World Press Freedom Day Sunday with a call to the National Council for Peace and Order (NCPO) to revoke three orders which they say restrict their right to speak freely.

TJA president Wanchai Wongmeechai said the media last year came under pressure from both sides of the political conflict, with some members of the public accusing media outlets of instigating trouble rather than merely reporting on it. Some cast doubts on the work and performance of the media. 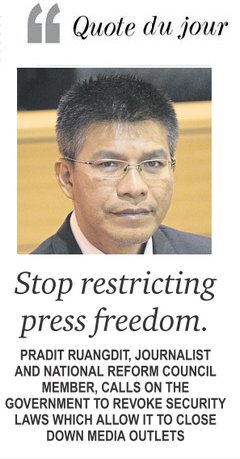 He said the situation worsened when the NCPO took power in the May 22 coup last year.

The freedom index of the Thai media in the eyes of the world dropped sharply after television and radio stations were ordered to suspend their programmes, while the print media was ordered not to present opinions in a way that might draw opposition to the NCPO, Mr Wanchai said.

The NCPO has issued three orders to further restrict the rights of the media. The first two — Orders 97 and 103 — were issued in 2014.

The most recent one — Order No.5 — was issued under Section 44 of the interim constitution, he said.

They ban criticism of the NCPO and authorities.

The three orders are widely seen as NCPO tools to restrict basic rights and freedom of the press and limit people's rights to information, he said.

"On the occasion of World Press Freedom Day, we would like the NCPO to revoke the orders to create an atmosphere for reconciliation and freedom of expression,'' the groups said.

"As the country is in need of reform, we need to open forums for people to express their opinions and give the media a chance to perform its duty to join them in finding ways to bring the country out of conflict."

The groups also reminded media professionals of the need to report responsibly and in an ethical manner.