Former prime minister Yingluck Shinawatra hopes to share her view of Thai politics with the European Parliament, that is if the junta lets her go.

German parliament members Elmar Brok and Werner Langen sent Ms Yingluck an invitation letter on Oct 7. A Pheu Thai party source who shared the letter Monday said Ms Yingluck she would seek permission from the National Council on Peace and Order to travel to either Brussels, the European Union's headquarters, or Strasbourg, France, the seat of the European Parliament. 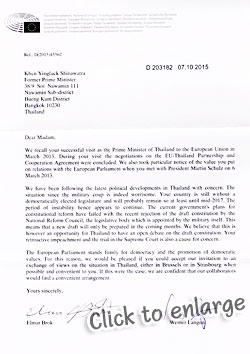 A copy of the letter from the members of the European Parliament supplied by a Pheu Thai Party source.

No date was suggested for Ms Yingluck to testify. If the NCPO gives her a green light, she will respond to the invite and arrange the trip.

In the letter, Mr Brok, who heads the European Parliament's foreign affairs committee, and Mr Langen wrote that the situation since the military coup on May 22 last year was worrisome and Thailand still lacks a democratically elected legislature.

They raised concern about Ms Yingluck being retroactively impeached over her government's rice-pledging scheme and now being tried for dereliction of duty over the same programme at the Supreme Court.

"We have been following the latest political developments in Thailand with concern," the letter read. "The European Parliament stands firmly for democracy and the protection of democratic values. For this reason, we would be pleased if you could accept our initiation to an exchange of views on the situation."

Whether the NCPO allows Ms Yingluck to go remains the question, however.

In February, the junta rejected Ms Yingluck's request to travel abroad due to its concern that she would then be indicted for the rice scheme in the Supreme Court's Criminal Division for Holders of Political Positions. She reportedly had planned to meet her elder brother and former prime minister Thaksin Shinawatra in Hong Kong.

Prosecutors are unlikely to indict Thanathorn Juangroongruangkit for applying to be an MP knowing he was not qualified as accused by the Election Commission, according to their spokesman.