The government has slammed the British ambassador's comments "supporting law-breakers" and is considering whether to summon him for talks.

By "law-breakers", the government was referring to a group of anti-coup activists who call themselves Prachathipatai Sueksa (Democracy Studies). They were stopped at a railway station in Ban Pong district of Ratchaburi province while they were on a train bound for Rajabhakti Park in Prachuap Khiri Khan.

The activists were taken to an army base in Nakhon Pathom where they were detained. All the students were later released from military custody. The majority of the students -- 30 -- signed an agreement promising not to engage in such activities again. Six refused to sign and two more withdrew their signatures.

The British ambassador to Thailand, Mark Kent, wrote in a Twitter post on Monday that, "I had hoped the fact 200 people [were] allowed to demonstrate at the US embassy might be relaxation of freedom of assembly," referring to a rally that took place in late November in front of the US embassy on Wireless Road against US ambassador Glyn Davies.

I had hoped the fact 200 people allowed to demonstrate at the US Embassy, might be relaxation on freedom of assembly https://t.co/GRrQ9t7Vzj

The protesters had gathered to slam Mr Davies' critique of the government's imposition of jail terms for lese majeste cases.

Foreign Minister Don Pramudwinai said Tuesday efforts were under way to link the students' visit to Rajabhakti Park to the gathering at the US embassy. He claimed the two incidents were separate. It was clear that the student's trip to the park was politically motivated to stir unrest, he said.

Regarding the British ambassador's comments on the issue, Mr Don said he will look at the details before considering whether to summon him for talks.

Deputy government spokesman Werachon Sukondhapatipak Tuesday hit back, saying that "it is disappointing that the ambassador took a position that has supported a group that has often broken the law and disrespected judicial processes".

"The NCPO regrets that this happened. This issue has been discussed with every envoy. If there are violent confrontations during upcoming elections, then everyone should take responsibility for escalating tensions.

"So far, every effort has been made to move the country towards general elections, but this type of behaviour can instead encourage 'lawbreakers' to further damage the country," Maj Gen Werachon said.

Every action taken is for the national interest as well as the interests of foreign friends, he said.

"It is hoped that other ambassadors will be able to understand that as long as the confrontation between the two opposing sides cannot be prevented, then the referendum and general elections could end up in chaos," he said.

Maj Gen Werachon insisted that authorities had to stop the student group to prevent a confrontation with local residents who hold different views.

He also said some Pheu Thai Party members have sought to provoke authorities to arrest the students, hoping for some foreigners to misconstrue the situation.

Responding to Maj Gen Werachon's criticism, Mr Kent told the Bangkok Post: "I think my tweet is clear enough. I was making an observation. It is of course for the Thai authorities to administer the country as they see fit."

"I hope they do so in accordance with their international obligations, as the EU has previously stated."

Deputy Prime Minister and Defence Minister Prawit Wongsuwon insisted that the government had no double standards in enforcing security measures to handle demonstrators.

Demonstrators from all groups have been treated equally under the same law, Gen Prawit said.

Prime Minister Prayut Chan-o-cha also insisted Tuesday that the student activists were stopped from visiting Rajabhakti Park because if they had gone there, they could have been assaulted by local residents who disapproved of their actions.

"Don't you know why they were stopped from going to the park? There were people waiting to attack them, or did you want us to let them go and let them get hurt? If that had happened, you would have blamed the government again," Gen Prayut said. 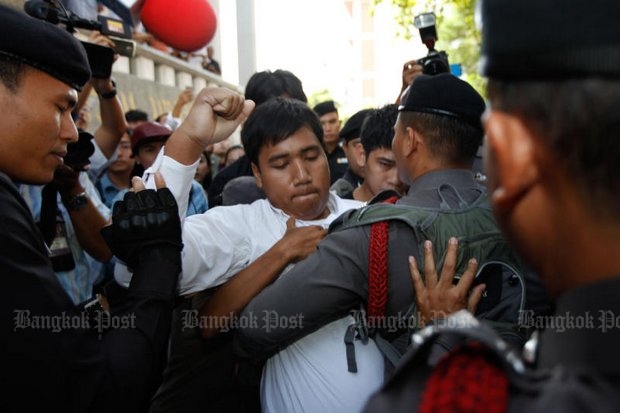 Sirawith Seritiwat, leader of the Prachathipatai Sueksa (Democracy Studies) student group, struggles against police Tuesday to attend a press conference to talk about his foiled visit to Rajabhakti Park in Prachuap Khiri Khan's Hua Hin district on Monday. He was greeted by a large crowd of supporters at the event at Thammasat University's Tha Prachan campus. (Photo by Jiraporn Kuhakan)

"The government should instruct authorities to abide by constitutional principles and laws. They should be more patient for the sake of peace," said the commission.

The commission also called on demonstrators to act carefully, honestly and take the public interest into account.

"These heavy-handed and completely unjustifiable arrests highlight Thailand's need to remove the military's powers of arbitrary detention, which are being used to harass and criminalise peaceful dissent," said Ms Patel.

"This group, some of whom were also denied access to lawyers, were detained merely for peacefully exercising their right to speak out against alleged corruption." 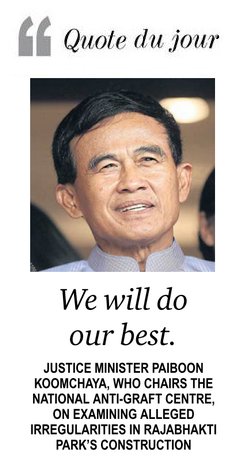 Sirawith Seritiwat, a political science student at Thammasat University and leader of the group, has vowed to return to Rajabhakti Park by train again by the end of this month.

"No matter what will happen, I will definitely go back to the park by train again within this month," Mr Sirawith told reporters at Thammasat University's Tha Prachan campus Tuesday.

Government spokesman Sansern Kaewkamnerd said that Gen Prayut did not want the problems of any particular person to impede progress in government work or to undermine public confidence in the administration.

"There is no need for the government to protect anyone, no matter how important a position they hold. If they are guilty [in the Rajabhakti Park project], they'll have to face the consequences," Gen Prayut was quoted as saying.