PM blames past policies for drought

Prime Minister Prayut Chan-o-cha has blamed past policies that heavily promoted cash crops as a root cause of floods and drought.

Commenting in the latest government's newsletter, Gen Prayut said growing cash crops without controls leads to the destruction of forests and watershed areas, and even affects weather patterns, given changes to the environment.

Therefore, his government will stop the destruction with new policies aimed at "restoring balance through responsible water usage".

The premier's comment, made as the country is struggling against a sharp drop in water in both natural and man-made sources, is another effort to convey the seriousness of water scarcity to farmers and households while at the same time providing assurances that authorities have plans to cope with shortages.

This government intends to "change agricultural behaviour", wrote Gen Prayut. He said that farmers will be encouraged to adopt mixed farming rather than single-crop farming, which is common in many crop fields.

Under a mixed system, farmers can continue growing cash crops, but they will be urged to mix other crops and livestock in the same area.

The government will also impose zoning regulations on cash crops such as rubber trees, palms, sugar cane and cassava to restrict their farming.

In the past, Gen Prayut said these crops were not controlled, causing farmers and especially businessmen to expand their farming into forests, a precious resource that helps the country regulate water.

Floods and droughts then follow, which are "difficult to prevent and thus leave governments as the only option to find solutions", he said.

Gen Prayut stressed the policies carried out by his government will mainly serve long-term water management. In the short term, he believes there is no better method than conservation.

The Metropolitan Waterworks Authority (MWA), which produces tap water for Bangkok and neighbouring provinces, has responded to Gen Prayut's policy by reducing its water usage.

Next month, the MWA will further reduce the amount of water pumped from the Chao Phraya River. This will generate a 10% savings, said MWA governor Thanasak Watanathana. 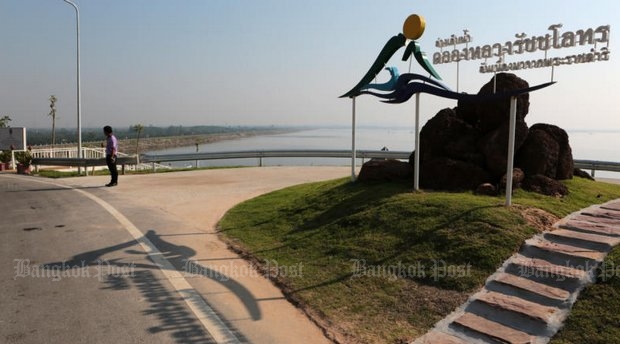 Khlong Luang Ratchalothon reservoir, a project initiated by His Majesty the King, has officially opened and is retaining water for consumption and irrigation in Chon Buri's Koh Chan district. (Photos by Chanat Katanyu)

His agency is also planning to ask the cabinet to approve a 45-billion-baht budget for new tap water development. The plan includes an increase in water production at Khlong Mahasawat, a canal that uses raw water from the Mae Klong River to produce tap water for the west of Bangkok.