Key tourist events in provinces put off or cancelled

Tens of thousands of tourists join the Surin Elephant Fair in November 2014. (Photo by Nopparat Kingkaew)

Several provinces have either cancelled or delayed indefinitely tourist events and festivals in the wake of His Majesty King Bhumibol Adulyadej's passing.

Among them were the Illuminated Boat Procession in Nakhon Phanom, the Yi Peng lantern festival in Chiang Mai and the Amazing Elephant festival in Surin.

In Nakhon Phanom, authorities have scrapped the annual Illuminated Boat Procession and other entertainment activities as the northeastern province joined Thais across the country in mourning the death of the beloved monarch.

For the province, he immediately held a meeting with relevant agencies responsible for organising the annual Illuminated Boat Procession and the Red Cross Fair, held between Oct 9-17, and all agreed to cancel all types of entertainment activities.

There would be no illuminated boat contest and boat races this year, said the governor.

The delay of the 12-day festival was in accordance with the Prime Minister's Office announcement, said Mr Atthaporn.

Provincial authorities would later inform visitors about the new dates and the organising venue, said the governor.

In Khon Kaen, Theerasak Theekhayuphan, mayor of Muang municipality, said the administration has cancelled all entertainment functions at Ok-Pansa festival, or Buddhist Lent, scheduled for Oct 16, around Bueng Kaen Nakhon public swamp, during the mourning period. Only functions reflecting the tradition and culture would remain, said the mayor.

Prayers would be held around the public swamp every day from 6.30pm onward to pay tribute to the King, he said.

In Chiang Mai, the Yi Peng lantern festival has been cancelled.

Thatsanai Buranupakorn, mayor of Muang municipality, on Friday held a meeting with the organising committee. The meeting resolved to cancel the four-day Yi Peng festival, originally slated for Nov 12-15.

Mr Thatsanai said the committee saw it inappropriate to organise festivals during the mourning period.

He had assigned his staff to inform the Tourism Authority of Thailand’s Chiang Mai office about the cancellation of the Yi Peng festival this year.

In all provinces, Thais gave alms to monks to make merit for the King, while many bought Friday's newspapers covering the sad news about the beloved monarch with the intention of keeping them as souvenirs, emptying many newsstands. 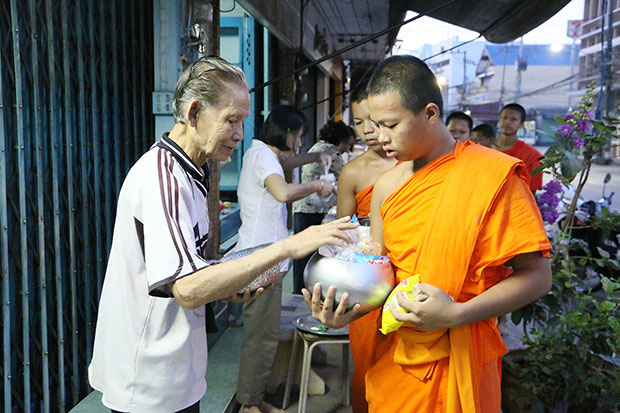 Mourners give alms to Buddhist monks in Phichit. (Photo by Sitthipoj Kebui)

In Phichit, many people, donning black outfits, gave alms to monks on Friday to make merit for the late king.

National flags at all government offices were flown at half-mast as Thais mourned the death of the late king.

In Phetchabun, people went to local newsstands to buy Friday’s papers as they considered them part of history in the making.

Jakkrit Tangpraisarnkit, owner of a newsstand in Muang district, said local residents and foreigners went to his newsstand early morning to buy newspapers. Several said they wanted to put the images of the late king in frames.

In Phitsanulok, people went to newsstands to buy Thai- and English-language dailies covering news about the King. Front pages of all newspapers featured large images of the monarch. 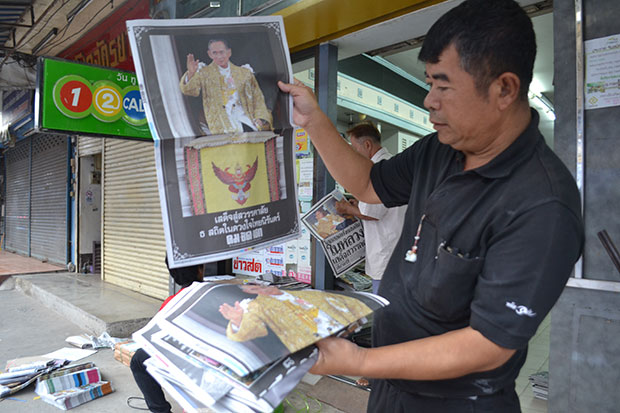 A man buys newspapers covering news about the King. (Photo by Chinnawat Singha) 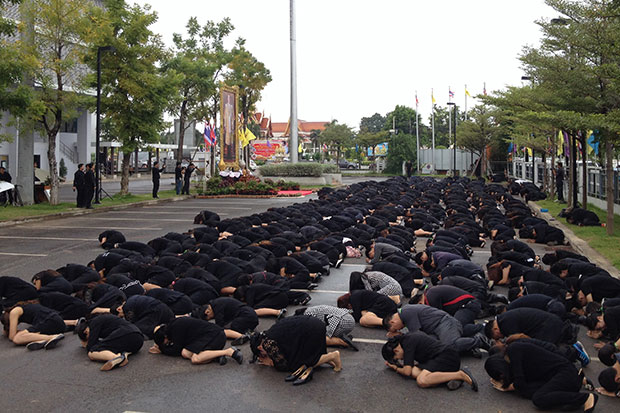 Government officials in black pay their respects to the image of His Majesty the King. (Photo by Yutthapong Kamnodnae)