Parking up the right tree

After a 26-year battle between Mahakan Fort residents and City Hall, the place this storied community once called home is now occupied by a 4-rai public park called Mahakan Fort Park, which lies adjacent to one of the historic fort's walls. It is located near the foot of Phan Fa Lilat Bridge off Ratchadamnoen Avenue.

Unofficially launched on June 1, the park never closes and is still in the process of having its official design and layout finalised, which requires the constant supervision and, ultimately, approval of the Fine Arts Department (FAD). The final design will be revealed to the public next year.

The Bangkok Post spoke with Deputy Bangkok governor, Chakkaphan Phewngam, who is in charge of the project, to learn more details about it and give readers a clearer idea of what it will look like in the end.

Why do you describe the park as being "temporary"?

After we reached an agreement with all Mahakan Fort community residents and got them moved out in April, the Bangkok Metropolitan Administration (BMA) began its work of converting the community space into this temporary public park. Since June 1, the park has been open for public use. This space can be used for sports and recreational activities around the clock, 24 hours a day, seven days a week.

The work began with clearing the place up by removing all rubbish and then filling the location with more soil and growing a carpet of grass throughout the entire space. A number of park lamps were then added and all 41 trees in the area were trimmed. These trees comprise 16 species including sacred fig, weeping fig, banyan and common fig trees.

Concrete paths and a number of benches have already been added for visitors. Siam Cement Group Plc sponsored the construction of a number of toilets at the park. Yannaprakat, a historic building that has yet to be registered by the FAD was repainted. Ong Ang canal that runs by one side of the building was dredged and a fence of about waist height was erected for safety reasons.

How much did all that cost? 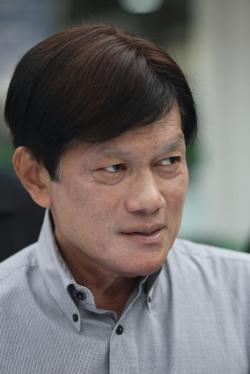 Probably under a million baht. The work at this point basically involves minor changes including levelling the ground, growing grass and laying paths. The workers and equipment used in these tasks were also from the BMA's Department of Public Works [DPW] and the Phra Nakhon district office that oversees the area. Donations from the public were also used to supplement the renovation budget.

It's now a case of the BMA working with the FAD to repair the fort and its wall, which runs along Maha Chai Road. The department has a set of guidelines for repairing a registered historic site, which it must follow. Because the fort is a historic site that has been registered with the department since 1949, every single thing done to it must be approved by the department first. The BMA has set aside 69 million baht for the repair work.

After this, the process of designing a "sustainable" version of the park will begin. A design committee has already been appointed with the Department of City Planning serving as its chair. The department will work with the DPW, the BMA's environment office and the FAD.

Ideally, the BMA aims to design Mahakan Fort Park as a combination of a green area where anyone can come to chill out and a historic site dating back to the Rattanakosin Period.

The fort is one of 14 built during that era under the reign of Phra Phutthayotfa Chulalok, or King Rama I, but only two now remain. The other one, Phra Sumen Fort, is on Phra Athit Road.

Inside the park there will be a sign showing its layout and other signage containing brief information about what the park has to offer, telling visitors what kind of trees there are, for example, and highlighting the history of all 14 forts.

A timeline showing how Bangkok was established as the nation's new capital, as well maps of the city dating back to 1897 and 1932, will also displayed. All of these signs will be written in Thai, English and Chinese.

More information from historians is being examined and may be placed in the park later. That would explain how, for example, the Yannaprakat building was originally built as a temporary accommodation for members of the royal family when they travelled by canal and stopped at a nearby waterfront pavilion.

More ideas about a network of roads linking all 14 forts are also being examined.

What kind of security measures do you have in place, such as keeping out homeless people?

We have municipal officials from Phra Nakhon district working there around the clock to ensure the park is safe and secure.

So what do you reckon -- will it prove a hit?

This depends on how people come to view the park, which has a special place in Bangkok's history.

If they enjoy immersing themselves in the history of the city, while at the same indulging in its natural beauty, then this is the place for them. The area next to the canal will also have its landscape refurbished soon.

Mahakan Fort Park is located close to several other historic sites, which makes it very convenient for people to plan their sightseeing trips.

Fourteen forts were constructed to defend the capital during the reign of King Rama I. They are as follows:

4) Mahankan Fort (at the foot of Phan Fa Lilat Bridge)

5 ) Mu Thaluang Fort (near the road leading into Rommaninat Park) 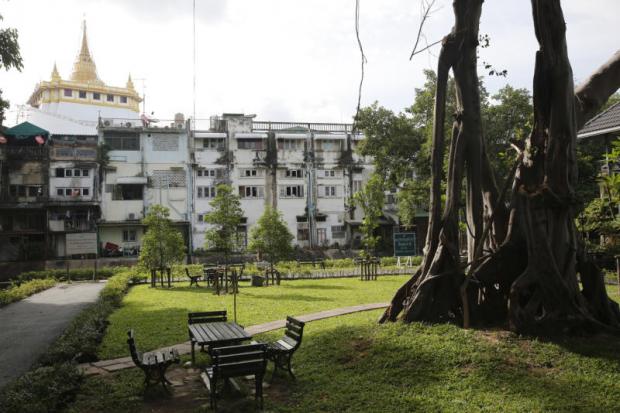 Part of the historic Mahakan Fort community has been turned into a park after some of the houses were demolished. A joint committee set up between residents and City Hall will decide which of the remaining houses will be removed or kept and used as a museum.