Fighting for a way of life
Thailand
Special Report

Fighting for a way of life

A court has denied six Karen evicted from shelters in the Kaeng Krachan National Park seven years ago the legal right to return to their land, and now legal action for encroachment beckons

bigger picture: A view of a village near Kaeng Krachan National Park in Phetchaburi province. Members of the Karen group were recently compensated for damage done to their homes by forest officials. PHOTO: Pattanapong Hirunard

The Supreme Administrative Court's ruling ordering the Department of National Parks, Wildlife and Plant Conservation to pay 300,000 baht in compensation to six Karen people living in Kaeng Krachan National Park in Phetchaburi province is a mixed victory for the minority group in its lengthy struggle with parks officials for the right to occupy forest land.

While upholding their claim for damages after parks officials seven years ago burnt down the shelters they occupied, the court disagreed with their claim that they had a right to occupy the land.

The Karen include their spiritual leader Ko-ee Mimee. Flouting the court ruling, the group have returned to what they say is their ancestral homeland, which has rekindled the dispute. Parks staff, who say they are obliged to keep the forests free of enroachers, are now preparing to charge them with encroachment.

WHERE THE CONFLICT BEGINS

In 1979, King Rama IX, while his staying in Krai Kang Won Palace in Prachuap Kiri Khan's Hua Hin district, told the Department of Royal Forest chief that it was important to protect and preserve the headwaters of the Phetchaburi River from any forest destruction, or severe drought would result. Even if forest concessions were granted, they should not lead to further forest destruction, His Majesty said.

Two years later, the fertile forest complex covering Nong Ya Plong sub-district, and Tayang and Khao Yoi districts in Petchaburi province covering 1.55 million rai was designated as the country's 28th national park, on June 12, 1981, under the name of Kaeng Krachan National Park. Later, the forest area was expanded to 1.8 million rai, at the time making it the country's largest national park. 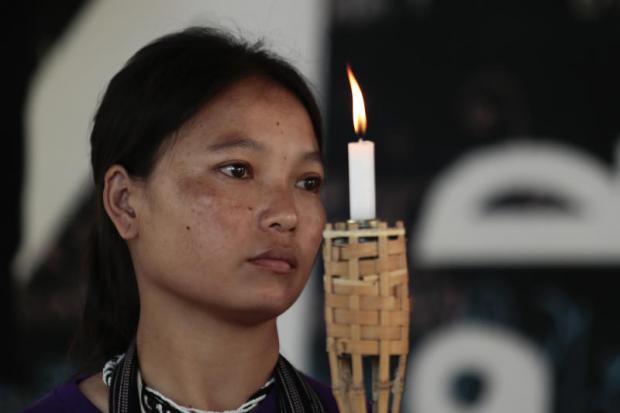 still no sign: Mee Noh, wife of missing Karen activist Porlajee 'Billy' Rajchongcharoen, during the tribute to her husband who has been missing for four years. PHOTO: Patipat Janthong

The Karen minority group move around the forest complex relying on slashing and burning cultivation methods to raise their crops. Authorities found this kind of agriculture was harmful to the forest ecological system. The forest is a significant habitat for wildlife and plants, which together with the headwaters of the river, feed over million people downstream. In 1996, under a royal initiative project of the Upper La-Ou forest and Khao Panern Thung Conservation, the authority decided to move 57 families with 391 Karen people out of the core zone by providing farming land elsewhere on condition the families will stop encroaching on the forests.

However, some failed to respect the deal. They returned to the core zone and continued with their shifting plantation agriculture, complaining the new place was not suitable as it lacked water and decent soil. In May 9, 2011, park chief Chaiwat Limlikitaksorn and his staff, under the Tenasserim operation, destroyed their 98 shelters by setting fire to them. They said they left the shelters vacant and there were no traces of people living there. Besides the vacant shelters, the authorities also found wildlife carcasses, firearms, foreign currency, a marijuana plantation, 100-year-old trees which had been felled, and around 100 rai of forest which had been destroyed.

The destruction of their shelters set the scene for a legal battle between the department and six Karen people led by the 106-year-old spiritual leader Ko-ee Mimee, who filed a complaint to the Central Administrative Court in May 2012, demanding the department pay compensation of 9.53 million baht, including lost benefits from the natural resources in the forest and loss of "identity" caused by the threat to their lifestyle. The court decided the forest officials were acting in line with their authority under the National Park Act's article 22 in clearing all illegal buildings inside the park.

But they were found to have breached the group's rights by failing to move their assets from the shelters, including cooking items. The court ordered the department to pay 10,000 baht in compensation to each plaintiff. The case later was appealed to the Supreme Administrative Court.

Tuenjai Deetes, commissioner of the National Human Rights Commission of Thailand (NHRC), said the court, in its final ruling, says it accepts the right of people to occupy and protect their own property, and that right also extends to the hill tribe people. She said the court found the authority failed to follow practices under the Act's article 22 and also went against the cabinet's resolution of Aug 3, 2010, which banned park officials from arresting the minority group in conflict areas.

"Their right to their assets is protected by the court's verdict and the department must take responsibility. The department must also follow the cabinet's resolution not to take legal action against Karen people in these areas," she said.

The court described the authority's action to burn down 98 shelters in the park as an "over-exercise of power". She added the National Human Rights Commission has agreed in principle to submit a proposal to upgrade the cabinet's resolution to the status of a law. 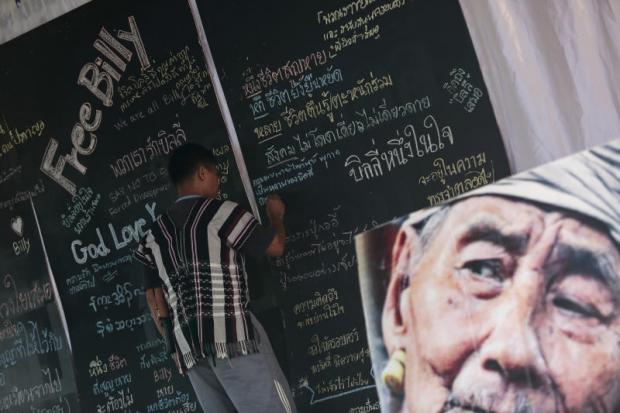 gone missing: The ceremony for Billy's disappearance. The former chief of Kaeng Krachan National Park has been accused of being involved. PHOTOs: Patipat Janthong

The Ministry of Culture in 2010 proposed to the cabinet a plan to protect the Karen and sea gypsy way of life, including where their lifestyles run foul of the law, such as when they occupy national park land. The Karen people want to be able to carry on with their traditional farming practices of shifting cultivation without risk of being charged with forest encroachment. The cabinet agreed with the proposal and asked state agencies to support their traditional way of life. Mrs Tuenjaj said the cabinet's resolution is the biggest step taken by the government in the area of human rights protection, and is also in line with the country's commitment to the Convention on the Elimination of All Forms of Racial Discrimination.

Surapol Kongchanthuek, a director of the Karen Studies and Development Centre who is also lawyer to the six Karen, said his clients still want the department to follow the cabinet's resolution on rehabilitating their culture and way of life, insisting they have full rights to live on the land as they were there before it was declared as a national park.

"They have been there for many centuries. They have their own traditional way of life which they pass on to the next generation, which is their basic human right protected and preserved by the constitution," he said.

ANOTHER SIDE OF RULING 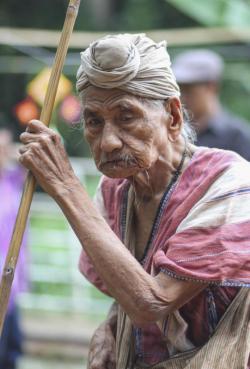 The court rejected their request that they return to the park. The judges found they have no legal document proving their right to live in the forest, and that forest encroachment is against the law. "The plaintiffs have no right to claim ownership to the land inside the park's territory, which provides benefits to the state and people as the whole," said the ruling.

Chaiwat Limlikitaksorn, former chief of Kaeng Krachan National Park, said he was unhappy with the case taken by the six Karen. He believed they were puppets controlled by a group of activists who wanted to discredit him. Finally the Karen people ended up as scapegoats in the case because the department intends charging them with forest encroachment.

He referred to the case of missing Karen activist Porlajee "Billy" Rajchongcharoen who was last seen in April 2014. Activists accused Mr Chaiwat of being involved in his disappearance. Mr Chaiwat was later transferred from the park to another post in the department, paving the way for a police investigation.

Previously he filed a complaint to police against the Karen, but they failed to appear. But now, the culprits have returned to the land and officials would pursue legal action. He said the department must follow the law, not the cabinet resolution. Moreover, the people were living in park territory, not the living and farming zone provided to the Karen under the deal.

"If Karen people can encroach in the forest and get away with it, why can't all Thais do that? Please be clear that the case involves forest encroachment and we need to do our job for arrest the culprits," he said.

Meanwhile, department chief Thanya Nethithammakul says aerial images are the best evidence to prove that for many years there were no traces of human activity in the area. Regarding the plaintiff's claim that they have lost their identity, the plaintiffs noted in their appeal statement that they still maintain their culture of shifting cultivation.

They could maintain their identity anywhere as long as they do not breach the law, he said, adding most of the plaintiffs have also received land allocated by the authorities, provided outside the forest core zone.

The Department of National Parks, Wildlife and Plant Conservation in 2011 proposed the Kaeng Krachan Western Forest Complex join the list of World Heritage sites due to its fertile land and the fact it is a significant hub for elephants and other wildlife. The Karen said the move was premature.

Wut Boonlert, the Karen-born adviser to the Karen Network for Culture and Environment in Western Region, said they would agree with the department if it provided clearly for their living zone and respected their traditional farming method of shifting cultivation.

Meanwhile, a source from the park said the issue of the park border line is already clear, based on a survey by the department and other state agencies.

There are 30,000 rai with over 2,000 Karen people living in accordance with the cabinet's resolution of June 1988 that allowed people to live in the forest legally if they had been there before that year.

Another 10,000 rai is covered by the National Council for Peace and Order (NCPO)'s decision that no legal action could be taken the poor in cases where they are found to be encroaching on forests. These people must live in the forest without causing any harm to the ecological system.

He said the amount of forest land occupied by people is less than two percent of the total forest complex, adding officials are now working to stop further forest encroachment. Since last year, 18 cases of encroachment have been taken over land covering 50 rai. 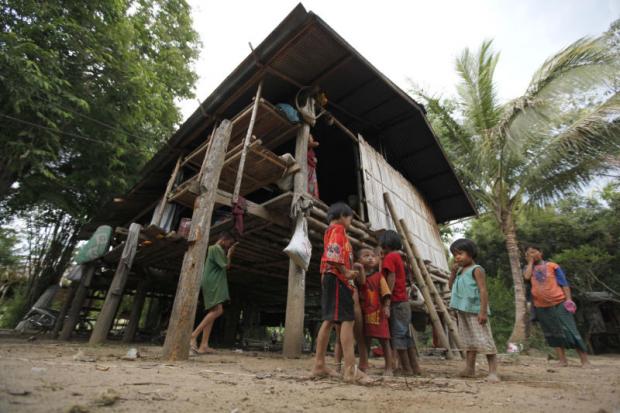 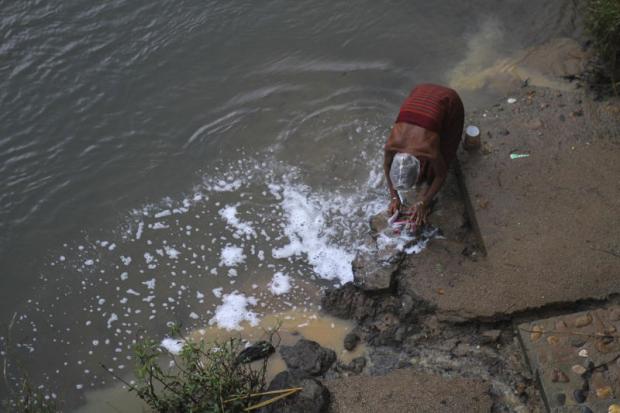 down to earth: Karen villagers lead a humble life in an area they call home near Kaeng Krachan National Park. PHOTOs: PATTARAPONG CHATPATTARASILL 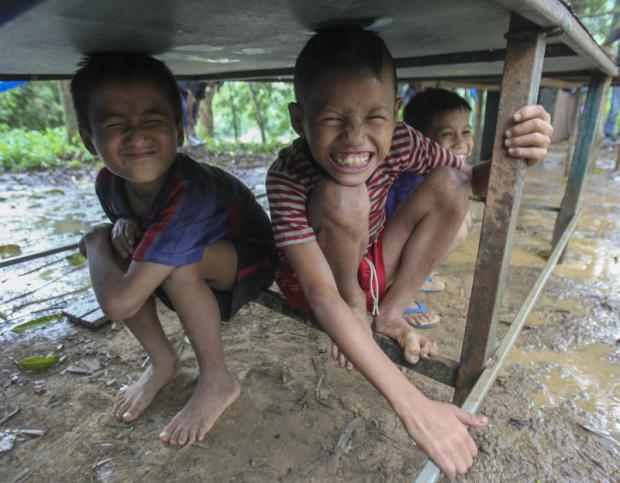