Villagers plead for government help while dams recede to record-lows

Villagers in tambon Krathum Rai of Prathai district of Nakhon Ratchasima province are in despair after water in a 25-rai pond dried up and the water levels in their last-resort supply, artesian wells, also started to dwindle.

Since the pond dried up, just three artesian wells have kept 2,000 residents in three villages supplied with tap water. However, with no rainfall, villagers find it more difficult to pump the water from underground, leaving them with grim prospects.

Prathai is among the districts in this northeastern province that have been hardest hit by the drought.

The Northeast of the country is currently the area most affected by the drought, while many other districts are going through similar struggles as water levels in ponds and rivers plunge.

El Nino, the weather pattern that has caused the severe drought, will worsen water shortages this year, according to the Department of Royal Irrigation.

The department has warned of severe water shortages in the Northeast, where the levels of water stored in dams are already very low. The levels have fallen significantly, from 57% last year down to 17% this year. 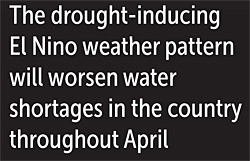 The water level in the Ubonrat Dam in Khon Kaen province is at only 3%, and 7% in the Sirindhorn Dam in Ubon Ratchathani province.

That prompted the Department of Disaster Prevention and Mitigation to announce an emergency in three provinces, including Roi Et and Si Sa Ket in the Northeast and Trat in the East.

The DRI will provide 1,851 water pumping machines to assist farmers in need, together with sending a warning message to people in risk areas that they should not expand their plantations due to the high risk of water shortages.

The Ministry of Agriculture and Cooperatives, the Ministry of Interior, Ministry of Defence and the Ministry of Natural Resources and Environment are working together to find an extra water supply, fix water pipes and send trucks to provide water to drought-stricken communities.

"We have less water in the dams this year, but we are certain that we will be able to limit the impact [of the drought] with good preparation. Each agency knows what to do and when," said Mr Thongplew.

According to the Thai Meteorological Department (TMD), Thailand is in the middle of an El Nino season that has enveloped the country since the beginning of this year and will last until April.

El Nino is a result of a rise in seawater temperatures. For Thailand, this weather phenomenon will lead to a reduction in rain precipitation of 10-20%, and higher temperatures this March and April.

The temperatures in the next two months may rise to 35-37 degrees Celsius, compared with 34.2C last year.

Despite the effects of El Nino, the DRI has insisted that villagers will have enough water for limited consumption and farming. Mr Thongplew insisted that the department will be able to supply water to farmland in irrigated areas under its control.

"There is enough water for farming and consumption in the areas under our responsibility. We have managed the water under our plan and around 7% of this water is left to last until the end of April," he said at a press conference early this week.

The DRI has earmarked more than 23 billion (cu/m) of extra water for use during the drought period. Of the 23 billion cu/m, some 2.4 billion will be reserved for consumption, 6.4 billion for ecological conservation, 13.95 billion for farming and 303 million for industry.

So far, the DRI has already used 17.9 billion cubic metres of water, or 78% of the water quota, leaving 7% for use until the end of April.

The DRI has, however, been worried about over-harvesting. Although the government has introduced a rice plantation quota system to ensure sufficient water supplies, some residents are defying that quota.

There are 5.8 million rai of rice plantations in the Central region of the country, which is 500,000 rai above the quota limit.

Similar instances have been reported in other regions. In total, over 1.31 million rai is over-harvested.

The Northeast has always been known as an arid area. Despite its massive plateaus, there are only a few rivers; the Chi River and Mun River, which depend on water from the transnational Mekong River.

The government has approved a water management plan to improve the region's water storage capacity in a bid to deal with the drought and flooding problems, according to said Samroeng Sangphuwong, deputy secretary general of the Office of National Water Resources.

The projects will be constructed in 16 water basins covering 12.59 million rai. When they're completed, these projects will collectively store over 995 million cu/m, which is enough to supply 4.9 million rai and 1.3 million families throughout the entire year.

Mr Samroeng said the cabinet has already approved a budget worth 274 billion baht to build 102 of the medium- and large-scale water projects.