After fraught journeys home, Thais who were studying abroad face a new set of challenges

Covid-19 pandemic forces students across the world to study on-line courses. A student takes class on-line using Zoom app as their classes were cancelled around the world.

As Covid-19 continues to rear its ugly head, people around the world stay separated from their families and friends as they try to make sense of a virus that has brought the world to its knees.

A successful vaccination remains a far-off possibility and patients live with mounting fears that even if they recover, they may get infected again. Families mourn the loss of loved ones without the chance to say goodbye. And as markets fall, the unemployment rate rises, leaving workers questioning if they will make next month's rent.

Amidst this chaos, students have not been spared.

The novel coronavirus has shut down universities and schools in the country, forcing institutions to drastically change their schedules and implement new tools to continue teaching their students. While local students cope with online learning, students overseas struggle to return home and continue their education in a different time zone. 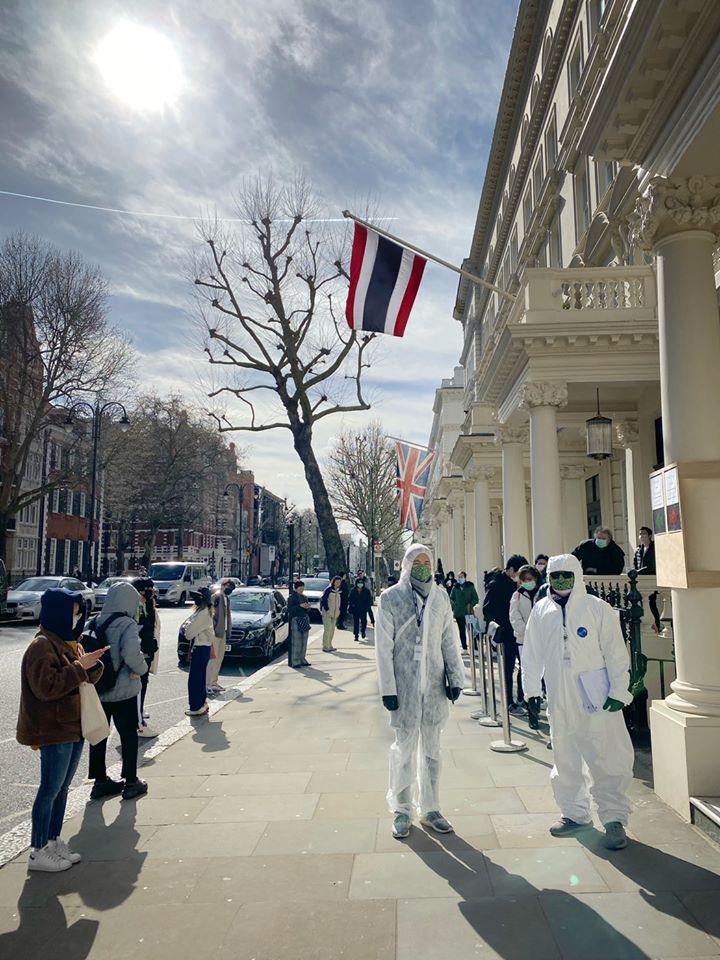 all-clear needed: Thais waiting at the Royal Thai Embassy in London to receive documents required for them to return home.

In the last few weeks, the government has issued new regulations that require people returning to Thailand to carry health documents that show they are fit to fly -- a process that has left many Thais stranded. Some who were able to leave spoke to the Bangkok Post about the trauma they faced and their insecurities about the future.

NK, a PhD student at Imperial College London had 24 hours to pack up his London apartment. He had a flight to catch, and he didn't know when he'd be back.

NK, who asked to be referred to by his initials, packed all his belongings into large suitcases and easy-to-ship boxes, just in case he was unable to return before his lease ended. It had been a stressful couple of days for him, filled with uncertainty and worry.

His parents called him every day, begging him to return to Thailand. "My parents didn't want me to be in a country where I was just an immigrant, where I had fewer rights," he said.

In March, NK decided to book a flight for him and his younger brother who also studies in the United Kingdom. They would land in Bangkok on March 21.

Three days before NK's flight, the Thai government unveiled a new policy. All passengers arriving in Thailand after midnight on March 21 required two documents: a "fit-to-fly" certificate and a stamp from the Thai embassy.

"It caught us all by surprise," NK said.

Thai Embassy in London's Facebook page was bombarded with complaints from angry and anxious Thais who were desperate to get home. To make things easier for people travelling immediately, the embassy decided to gather Thai doctors working in the country.

They brought them to the embassy on March 19 and set up a room where people could get a fit-to-fly certificate and a notary stamp.

"It created a dilemma -- you either risked a mass gathering at the embassy or you were stranded," NK said. "It was an impossible choice."

NK went to the embassy with his brother, waiting in line for over two hours to get the documents. To receive the fit-to-fly certificate, a doctor asked if they had any symptoms, and took their temperatures, heart rates, oxygen levels and blood pressure. They were then handed the document.

NK said the process was well-intentioned but didn't accomplish what was needed because it put people at risk.

"The test was essentially useless," NK said. "Having a fit-to-fly certificate didn't mean one didn't carry the virus. All it did was send people on a bureaucratic paper trail that proved useless."

On March 20, NK headed to the airport with his brother. He wore a surgical mask and an old poncho he'd found in a suitcase from a trip years ago. He and his brother washed their hands constantly and used anti-bacterial wipes every 30 minutes to clean their luggage handles, clothes, phones and anything else they touched.

The flight from Heathrow to Doha was packed. They sat next to an Asian man wearing a full Hazmat suit. His entire body was covered except for a centimetre-wide gap exposing his eyes, NK said.

"A lot of people in the West have had a prejudice against Asian people because they believe we are the carriers of the virus," NK said. "But ironically, I think we are the most prepared."

After he returned to Bangkok, NK entered the 14-day quarantine. During his two weeks of self-quarantine, he sent daily updates to the government through the Airports of Thailand (AoT) app. AoT requires Thai returnees to report their health condition throughout their quarantine period.

And when the two weeks were up? "It was pretty unceremonious," he said. "I just went down for lunch."

Parth Maheshwari, a final-year student at The Hong Kong Polytechnic University, was completing his coursework online before Covid-19 shut down an already politically unstable Hong Kong. After his university closed, Parth returned to Bangkok, where his parents live.

After nearly six months of online learning, Parth admits he is still not used to it, nor does he enjoy it.

"I hate the online experience," he said. "It's not exactly interactive and lacks enthusiasm from both ends. I'm an engineering student, so the practical component, which is huge, has obviously disappeared."

Parth has about 18 hours of lectures every week. He spent his days in front of a computer screen learning from mostly pre-recorded courses.

Parth said one benefit of the recordings is he can take extra time to understand a concept by replaying or pausing the lecture. But without hands-on and practical experience, staying excited is a struggle, he said.

Khushboo Jogi, also a final-year student at Hong Kong University, said that up until a few weeks ago, she was hopeful she'd be able to spend her final term on campus. But she doesn't see herself leaving her home in Bangkok any time soon.

"Everything feels uncertain," Khushboo said. "I need to breathe and not overthink so much."

Some students are working with huge time differences as they finish up their spring term. For Ken Lohatepanont, a political science major at the University of California, Berkeley, it's been especially hard. 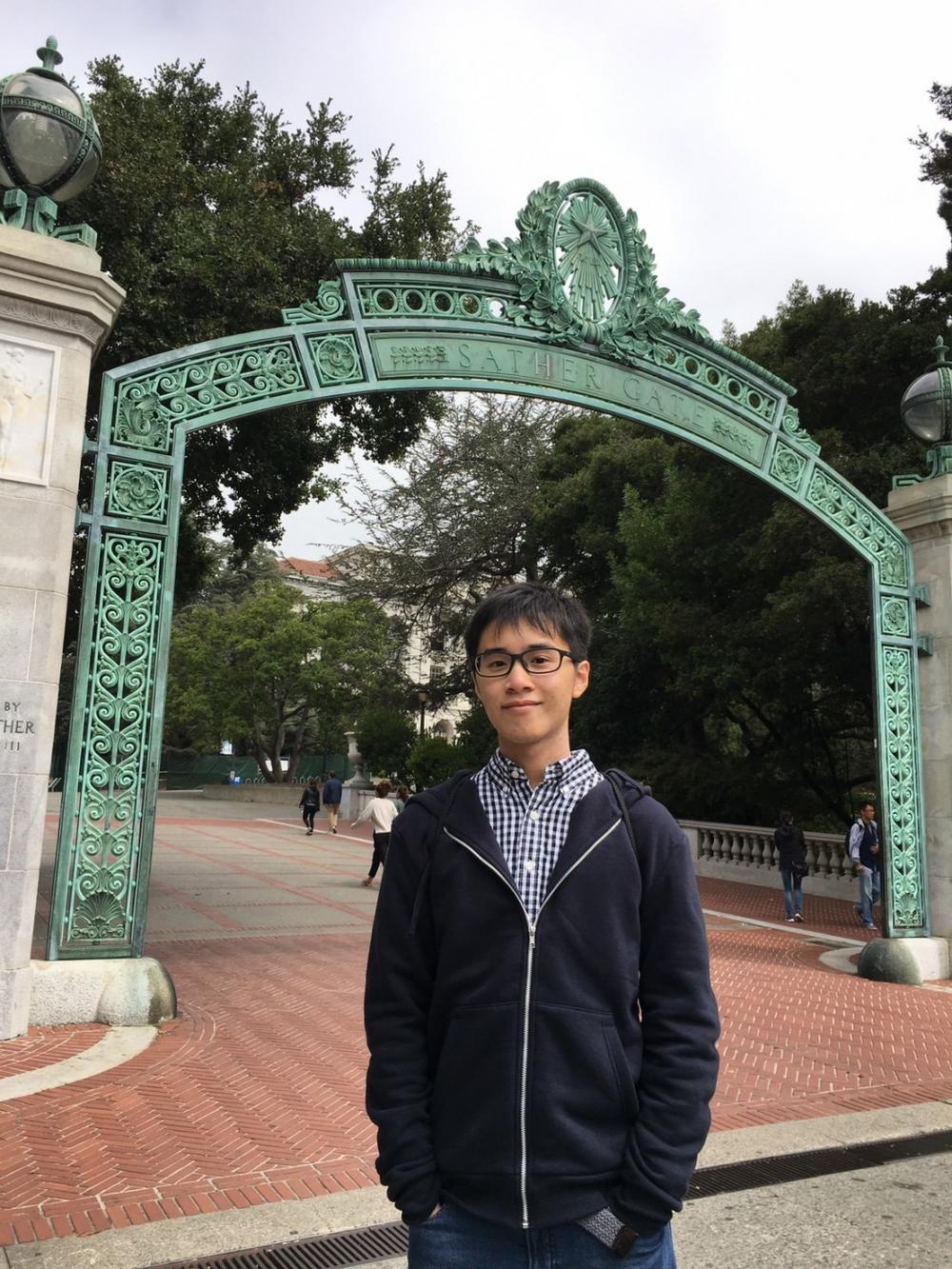 Ken returned to Thailand in mid-March. Because of the 14-hour time difference, he now has classes every day at three in the morning.

"My sleeping schedule is all out of whack," he said. "I'm not doing my best work right now."

Thai students abroad have been criticised for returning home because of the risk of infection. It's a risk of which Ken says he is well-aware. But he says it's not that simple.

"For their own safety, students abroad felt it would be better to be in Thailand because there was a lot of uncertainty about healthcare. A lot of students don't have the support they would have at home," he said.

"Families back in Thailand also don't want their children to be alone."

Since the start of the pandemic, many universities have changed their default grading schemes to pass/fail. It's a system for which Ken says he is grateful. "For the first time, I feel like I'm learning for the sake of learning."

Students like Khushboo who are graduating this year are worried about finding a job as global markets decline and unemployment rates rise. "Dealing with the anxiety of what's happening has been hard," Jogi said. "It's that constant fear of what if."

Khushboo is now considering applying to graduate school to give herself an edge. It wasn't part of her plan, she said.

"It's a big lesson because I know life isn't going to go my way," Khushboo said.

"I am coming to terms with the fact that I might not get a job for the next year or two."