When she heard the foreign donations that paid for her studies were falling drastically, 16-year-old Myanmar migrant Seng Jam Longzaw began to worry that her dream of becoming a nurse was vanishing. 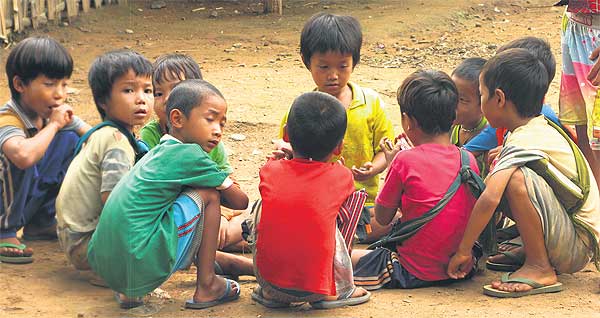 YEARN TO LEARN: Above, migrant children such as these face a major challenge in getting an education.

Seng is enrolled at Chanapathum School, a middle and high school in Chiang Mai's Fang district. The money that has kept her in school comes through the Shan Women's Action Network (Swan), a Thai community-based NGO that supports thousands of children along the border with school and transportation fees.

But due to the recent political developments in Myanmar, organisations like Swan that work along the Thai border are finding it difficult to attract funds to keep their programmes alive.

The result is that at the moment, thousands of migrant children in Thailand who receive support from international donors through community-based NGOs are facing difficulties. This year Swan has experienced an 80% shortfall in the funds needed to help students starting the new school year this month. Other exiled women's organisations in Thailand are also facing similar financial hardships and will find it difficult to provide education for children.

As many as 36 community-based NGOs in Thailand have sent letters of appeal to foreign donors urging them not to cut support for their projects on the Thai-Myanmar border. And it is not only the educational efforts that are hurting. The renowned Mae Tao Clinic, located in the Thai border town of Mae Sot, which provides essential medical services for hundreds of thousands of refugees each year, has only received enough funds to cover half of its annual budget.

The Thai Burma Border Consortium, which provides food rations and other necessities to 145,000 refugees, said the loss of funds from international donors makes it hard to maintain its programmes as well,

''So now they [refugees] only get some 80% of basic minimum requirements in food and in other sectors. In particular, teachers' stipends have been reduced,'' said Sally Thompson, the deputy director of the consortium. ''It is now very difficult to find teachers because some of them are trying to find other forms of work.''

Seng has always been enthusiastic about her education, and sees it as a gateway to a better future.

''When I was young and I saw students wearing school uniforms, I thought I would like to know the experience of attending school,'' said Seng as she gazed at an orange plantation 15km from Fang.

''Whenever my parents forced me to miss school I cried because I wanted to be educated. Now if I have no support, I have to work to save money for my studies.''

Before Seng started her programme at Chanapathum School with the assistance of Swan, she and her brother attended Wat Phra That primary school for migrant children, which is also sponsored by the NGO. However, they weren't receiving direct support from Swan.

While Seng has managed to continue her studies at Chanapathum School with Swan's help, her brother has already left school for financial reasons.

He had hoped to save enough money to resume his studies, but is sheepish about returning to the classroom as he is older than the others and his body has become thick ''like an adult's'' from doing hard labour. 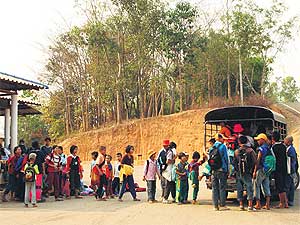 SCHOOL’S OUT?: Many migrant students are uncertain whether they will be able to study this term.

Most children of Myanmar migrants living in Thailand are undocumented and have to overcome many obstacles to get a chance to study. They typically have to get up about 5.30am and walk 20 minutes from their farms and wait for a vehicle to pick them and take them to school.

Seng says the vehicle picks up as many as 40 students and the trip to school can take two hours.

Hla Tun Nandar, 33, is the headmaster at Wat Phra That and a volunteer teacher at the Wiang Wai School, and knows how hard it is for migrant students.

''The children have a desire to learn. Most of these children have many problems when it comes to their studies. If the support is cut their parents will not be able to afford to send them to school. Their future will become unclear. I want them to at least be able to read and write. At least that will benefit them in the future.''

Hla Tun Nandar said when the children heard that the financial support for their studies had been cut most of them requested to leave the school. ''They thought that they could get a free Thai education, but the school collects some charges. Most children don't come to school when their uniforms are wet. They only have the one uniform. The parents can't afford to support their children's school fees for the whole year.''

Seng's mother works on a farm and earns 125 baht a day. Her father gets 135 baht a day. With this they have to feed a family of six. Seng's studies cost about 5,000 baht a year.

Seng's mother, Pa Hpar, says it hurts her to know her daughter will have to leave school because of lack of funds.

''I felt sad when I sent her to school because some people criticised us. They said that children of labourers should not be educated. How can we now support her education? I want her to work, but she is very keen to attend school.''

It's a constant dilemma for families such as Seng's. Do they send their children to school or let them work as labourers to help put food on the table?

''If Seng cannot receive support [for study] I will have to get her to leave her school,'' says Pa Hpar. ''We could use her daily wages.''

Seng can earn 100 baht a day picking oranges on the farm and spraying pesticides.

Seng is just one of many migrant children who may not get the chance to finish her education as funding dries up.

Nong Moon attends primary school at Wiang Wai School with the support of Swan. But during the school holidays she helps supplement the family income by working on a chilli farm. She earns three baht for picking one kilogramme of chillis.

Nong Moon's mother is worried about the cuts to the school funds.

''I cannot send her to school if the support stops,'' she says.

Spectrum sent emails to a number of NGOs and donors asking about funding cuts for the refugee programmes, but all had yet to reply as of press time.

The US recently eased sanctions against Myanmar, announcing that it would permit financial transactions to support humanitarian and development projects that allow NGOs to expand their operations.

Myanmar watchers point out that some donors consider the funding of 20 years of political struggle outside Myanmar to be a failure. This has led to some international NGOs refocusing their work inside the country. Many donors think that directly supporting projects is more effective.

Matt Hilton, of the Australian Aid Watch programme, said: ''Australian aid programmes are supposed to help people overcome poverty _ we believe that the Australian government and other donors should be most focused on this outcome and this means not abandoning people on the border. AusAID and other donors need to take responsibility for people still living on the border who are unable to return to Burma.'' Mr Hilton pointed out that change in Myanmar is still in the early stages.

''Things have only just begun to change, and even with some reforms there are still overwhelming human rights issues and legitimate reasons why people cannot return home. If there is to be a switch to bilateral aid in Burma, it should not come at the expense of the poor and marginalised on the border.

''The aid programmes on the border should only be phased down when the people there are able to leave. If they want a bilateral programme in Burma, they should use new money. But in the current environment, it appears unlikely that working inside Burma will have the same effectiveness in reaching ethnic minority groups. This will only benefit the repressive government.''

The European Union has allocated 150 million (5.9 billion baht) to be spent in Myanmar during 2012-2013. Catherine Ashton, the EU's high representative for foreign affairs and security policy, was full of praise for the Myanmar government in a statement after her trip to the country last month.

''The president [Thein Sein] has the ambition to reduce poverty in line with the Millenium Development Goals in the next two years. We want to be a part of these efforts. He talked about education and health, the need to develop small businesses, which will be the backbone of the economy, and the opportunity to get investment from European companies,'' Ms Ashton said.

International NGOs working inside Myanmar estimate that about 70% to 80% of ethnic areas (all along the borders) are off-limits to them and the United Nations.

According to Gerhard Baumgard from People In Need, an international NGO that supports education, development and training of orphans and needy children and young people in Myanmar, no area in the country should be off limits to international NGOs and they should insist on access.

''Don't expect any economic development or INGO [international NGO] aid on the Burmese side of the border. Western governments, the UN and INGOs should insist on free access for aid to all restricted areas of Myanmar, otherwise there's no development and the poorest of the poor will continue to suffer. We have not heard this demand from anybody yet _ not from politicians, not from the UN, not from the INGO community.''

Bo Bo Han, co-founder of the self-reliant Aung Ban library that offers free education and training for students in Southern Shan State, emphasised that international donors should directly work with civil society groups that work with the public rather than through organisations such as the UN.

''Direct assistance from donors to grass-roots civil society organisations is more beneficial. If it goes through the UN, they have to deal with the government and there will be delays in the process because of red tape. There are many examples that show the public doesn't get the full support from donors when donations have to pass through many hands first.''

Meanwhile, many thousands of children along the border are still waiting to learn if they will be able to attend school this semester.

''I feel sad when I have answer questions from migrant workers on whether or not they can send their children to school. I would love to urge everyone concerned not to kill the dreams of these children who desire to be educated,'' said headmaster Hla Tun.