BIN IT: The consortium which won the contract to manage waste at Suvarnabhumi airport 10 years ago says not enough waste is being generated to justify building the two incinerators it was meant to.

When the Samart Corporation partnered in a lucrative deal to dispose of waste at Suvarnabhumi Airport in 2006, questions were raised as to why a telecommunications company was awarded the contract. The 600 million baht agreement with the Airports of Thailand (AoT) called for the construction of two incinerators to handle all waste generated at the country's biggest airport.

Alongkorn Ponlaboot, a former deputy leader of the Democrat Party, also pointed out irregularities in the contract, which contained overly generous terms such as promising a minimum payment to the Samart-led consortium if the airport failed to generate 40 metric tonnes of waste each day.

"The terms of the contract were suspicious," he said in 2006, while calling for the AoT to look into the issue. The contract expires in September this year, 10 years after the initial agreement, and the incinerators have still not been built.

Contracts and internal documents seen by Spectrum indicate Samart avoided building the incinerators and was not penalised, despite violating the terms.

The documents also highlight the slow pace at which the AoT handled the case.

Despite holding discussions with several state agencies and setting up a special committee to tackle the issue, the AoT did not advise what to do next.

It is difficult to determine what will happen before the contract expires. Samart declined to comment for this article. The AoT did not respond despite Spectrum's repeated requests for comment since March 22, and Suvarnabhumi airport management declined to be interviewed, citing an ongoing court case.

The contract, between the AoT and SPS Consortium Group (which consisted of Samart and two waste disposal companies: the SET-listed Professional Waste Technology Plc and Siam Waste Management Consultant Co) was valued at 607.48 million baht. It required the consortium to provide a one-stop-service waste management at Suvarnabhumi airport including construction, transportation and waste disposal and sorting.

A clause also stated it would be paid for a minimum of 40 tonnes a day, even if the total waste collected was less.

According to a plan seen by Spectrum, construction of the incinerators was supposed to start in January 2007 and finish by the end of that year.

However, in June, August and September 2009, SPS submitted five letters asking AoT to reconsider the terms of reference. Instead of constructing incinerators, it proposed disposing of the waste in landfill. It also asked AoT to waive the fines of 250,000 baht per day, due to the "inappropriate amount and type of waste" produced at the airport.

SPS proposed disposing of about 65% of the non-recyclable waste in a landfill in Sa Kaeo province. It proposed that degradable waste, such as food, would be given to a nearby community to use as fish feed, while infectious waste would be incinerated elsewhere, and hazardous waste disposed of in a secure landfill in Sa Kaeo.

The problem, according to SPS, was that Suvarnabhumi airport produced too little waste. Prior to the signing of the contract, an independent environmental impact assessment (EIA) estimated that the airport would generate 66.59 tonnes of waste per day. 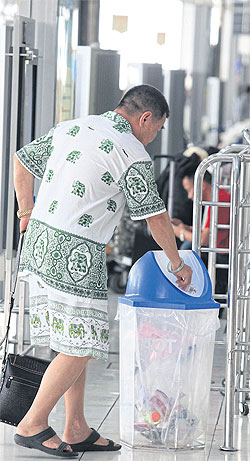 Where to?: About 65% of non-recyclable waste ends up in a Sa Kaeo landfill.

SPS alleged that it could collect 35 to 40 tonnes of waste, with only 21-24 tonnes left for >> >> disposal after being sorted for recyclable waste. The Group also claimed the moisture level of the waste was too high for incineration. Not only did it point fingers towards business operators at Suvarnabhumi for disposing of their own waste, and selling it, it also claimed some of the waste was "stolen" and resold.

Despite Mr Alongkorn's efforts to publicise his suspicions regarding the deal when it was signed in 2006, public attention soon waned.

At the time, the Democrat Party claimed the International Civil Aviation Organisation (ICAO), which had been an adviser to the AoT, opposed the building of the waste-disposal and treatment plant at the airport.

The allegations also focused on suspected cronyism behind the deal, suggesting that the consortium had close ties to the Wongsawat family.

Somchai Wongsawat is a brother-in-law of fugitive Prime Minister Thaksin Shinawatra and chaired a committee that appointed the AoT executives.

He was a senior member of Thaksin's People Power Party and served as prime minister in 2008 until parliament was dissolved the same year following the yellow shirt protests.

Mr Alongkorn noted the same consortium won several information-technology projects from the Justice Ministry and Suvarnabhumi airport between 2004 and 2006.

Some of the consortium's executives were former board members of Thaksin's Shin Corp, he added.

Airport waste disposal was thrust into the limelight again earlier this year with reports of goods confiscated by security staff being resold.

Instead of being destroyed, confiscated cosmetics were reportedly being resold on the internet. They included perfumes, body lotions and facial creams. These were allegedly sold by volume of product left in the containers -- with some going for as little as 50 baht.

The issue raised questions about whether the companies under the Samart-led consortium were complying with garbage disposal regulations in the handling of confiscated items.

AoT conceded the amount of waste was low, according to an internal memo seen by Spectrum. The memo stated that business units operating at the airport, such as airline kitchens, the Novotel Hotel and business operators in the duty free area, chose to dispose of their own waste. AoT, however, blamed its cleaners for taking away recyclable waste.

RELUCTANCE TO GIVE GREEN LIGHT

To further justify its change of plan, SPS hired King Mongkut's University of Technology North Bangkok, Mahidol University and Kasetsart University to conduct a study on waste management at Suvarnabhumi. All three studies came to similar conclusions -- the waste generated at Suvarnabhumi was not appropriate for incineration, and that burning the waste at the airport might contribute to cancer and air pollution, causing harm to the health of passengers, employees and communities surrounding the airport. The study also found that the moisture level of the waste was too high for the incinerator's capabilities. Moreover, as it uses fuel, it was deemed too costly.

While the AoT largely agreed with the group's new proposal, based on the amount of waste generated and the university-led studies, internal documents seen by Spectrum show AoT executives were reluctant to give SPS a green light. As the new method proposed by the consortium was not part of the original terms of reference, the AoT as a state enterprise under the Transport Ministry did not want to risk involvement in legal proceedings.

The AoT first sought advice in October 2009, three years after the start of the contract. It submitted a request to the Office of Natural Resources and Environmental Policy and Planning (Onep), which approves EIAs, asking if the method of waste disposal at Suvarnabhumi could be changed. Around this time the AoT agreed to waive the fine it initially imposed on SPS of 250,000 baht per day, starting from the construction deadline.

Onep finally approved SPS' request to dispose of the waste to landfill two years later, in June 2011. The consortium in September sought to lower the service fee paid by the AoT by 2.5%, lowering the value of the project from the initial 607.48 million baht to 592.29 million.

By 2012, SPS had gained the upper hand in the deal, having been waived of all fines and receiving initial approval from the AoT, and subsequently Onep, to continue disposing waste in landfills.

Still the AoT was reluctant to act, and submitted a letter to the Office of the Attorney-General asking for advice on the issue. The OAG responded in writing, saying any contract change could only be done out of necessity and should not place the AoT at a disadvantage.

This is in line with AoT regulations, which do not allow contracts to be amended unless necessary and the amendment does not place the AoT at a disadvantage. The AoT's legal department said in writing that although management agreed that the contract could be amended, "it is still unclear as to whether or not the amendment is necessary".

According to the internal documents, the AoT attempted to solve the issue in June 2013 when a nine-member committee was tasked with finding a solution. While the committee came up with a list of pros and cons for each of the three options the AoT could choose from, it failed to come up with a solution to the problem and left it unclear as to whom had final responsibility in approving contract amendments.

In a letter to the director of Suvarnabhumi airport, the committee suggested disposal to landfill outside of the airport would be appropriate given the small amount of waste generated, but noted the environmental and health impacts on nearby communities.

Finally, it stated, the budget might need to rise if the AoT was to construct an incinerator capable of handling a larger volume of waste, following completion of the second expansion phase of Suvarnabhumi airport. 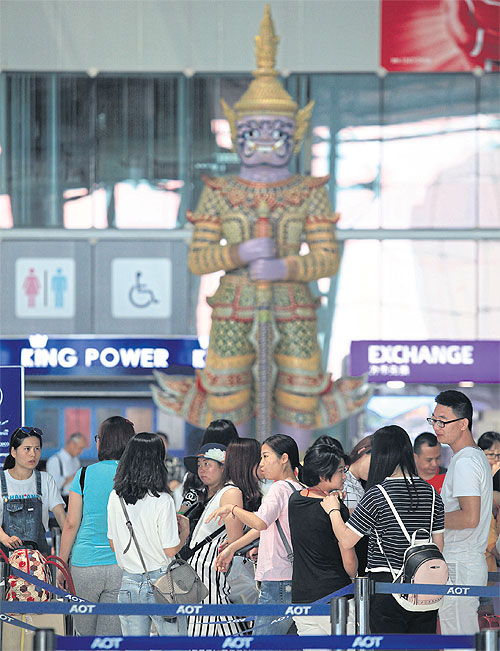 EN ROUTE: Even as passenger numbers surge at Suvarnabhumi, the airports authority has delayed a decision over the waste management. 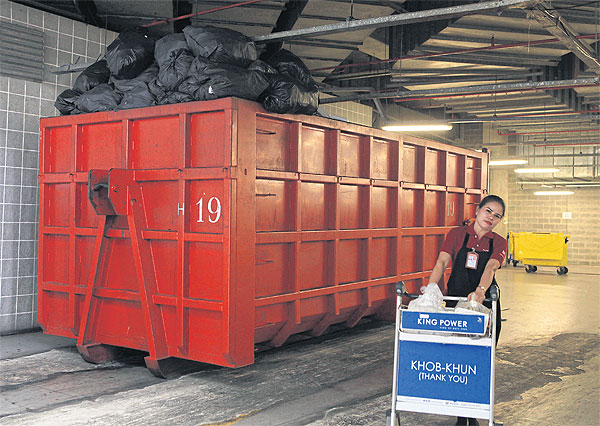 LOAD OF GARBAGE: The waste storage area on the west side of the airport. Incinerators and an organic digester remain unbuilt, even as the 10-year contract is about to expire. 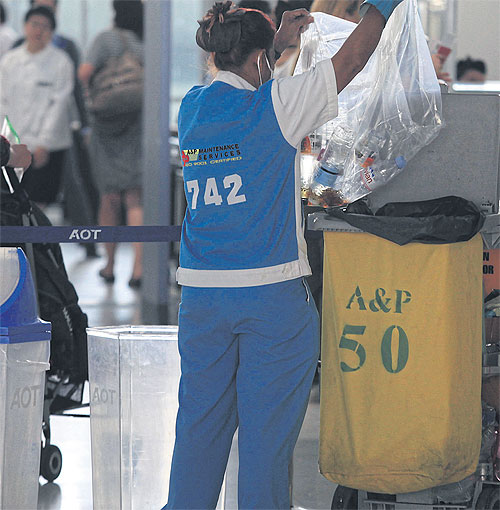 BURI RAM: A woman was killed by lightning in Prakhon Chai district of this northeastern province on Saturday afternoon. Her husband, their son and daughter and another woman sheltering under the same tree were unhurt.