People from all over arrive in Narathiwat's Sukhirin district to pan for gold. But don't expect large yields

The clear water of the Sai Buri River turned murky. The current was a bit strong due to the heavy rain the night before. However, the unpleasant condition of the river did not stop a group of villagers from Ban Phu Khao Thong in Narathiwat's Sukhirin district to pan for gold, the traditional prospecting technique that has been practised for more than four decades.

"I have panned for gold since I moved to the village in 2005 from my hometown in Nakhon Ratchasima. I can find gold every day," said Roam Srisanngam, adding that "it was easy to find gold in the past like 1g per day, but not nowadays". Today she finds minuscule amounts, collecting the metal in a plastic bottle before selling.

Ban Phu Khao Thong, bordering on Malaysia's Kelantan state, has been known for gold mining since 1932 when the Societe des Mine d'Or de Litcho from France got a 25-year concession to mine for gold in the forested area. The business was going well until 1941 when the company closed due to World War II. According to a record of the Department of Mineral Resources, the French company dug out 1,951kg of gold during the nine years of mining. 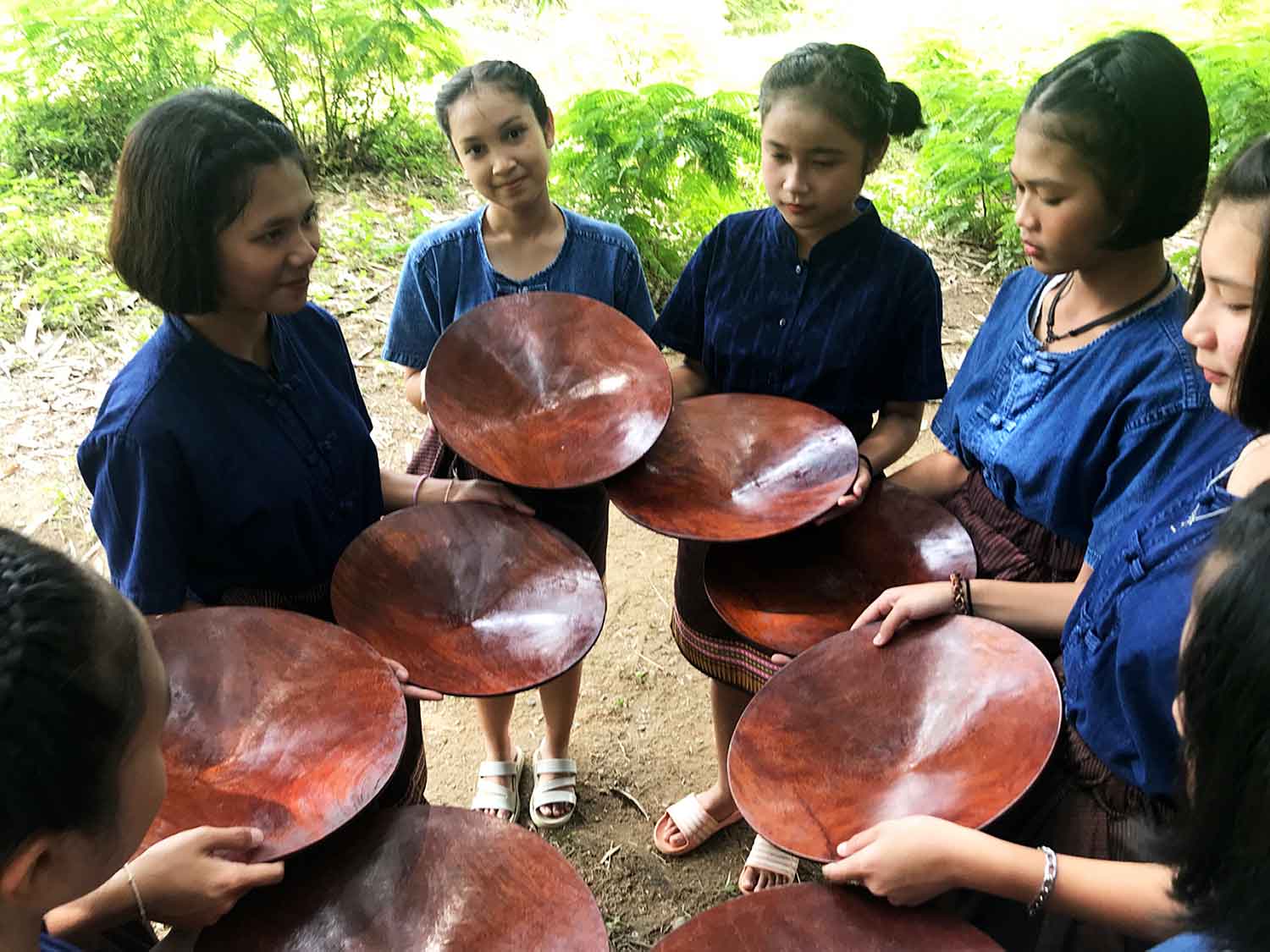 The Ban Phu Khao Thong Community-based Tourism Group can arrange various activities. For our group, they had guides lead us through a tunnel to observe gold mining in the forest. The trail requires you to cross a small stream so wear proper shoes or sandals. The lunch set was delicious and mainly made of homegrown vegetables. They serve unlimited fruit like locally grown durian and mangosteen.

In 1963, the government announced the Nikhom Sang Ton Eng Pak Tai (meaning the self-development community in the South) programme to migrate people from northeastern and central provinces and other parts of the South to Sukhirin and Chana districts in Narathiwat. The project started in 1974 and a total of 5,633 families were relocated. Each family was rewarded with 18 rai of land for farming.

In Ban Phu Khao Thong, most people migrated from the Northeast. About 90% of the people living in the village are Buddhists, 5% are Muslims and another 5% are Christians, said Chirasak Moranok, a guide from Ban Phu Khao Thong Community-based Tourism Group.

"We are the only community in the South that organises Bun Bang Fai every year," he said. The event, also known as the Rocket Festival in English, is a traditional ceremony to ask the deity Phya Thaen for rainfall for their farmlands. The celebration is hosted on the second Saturday of June to mark the beginning of rainy season. 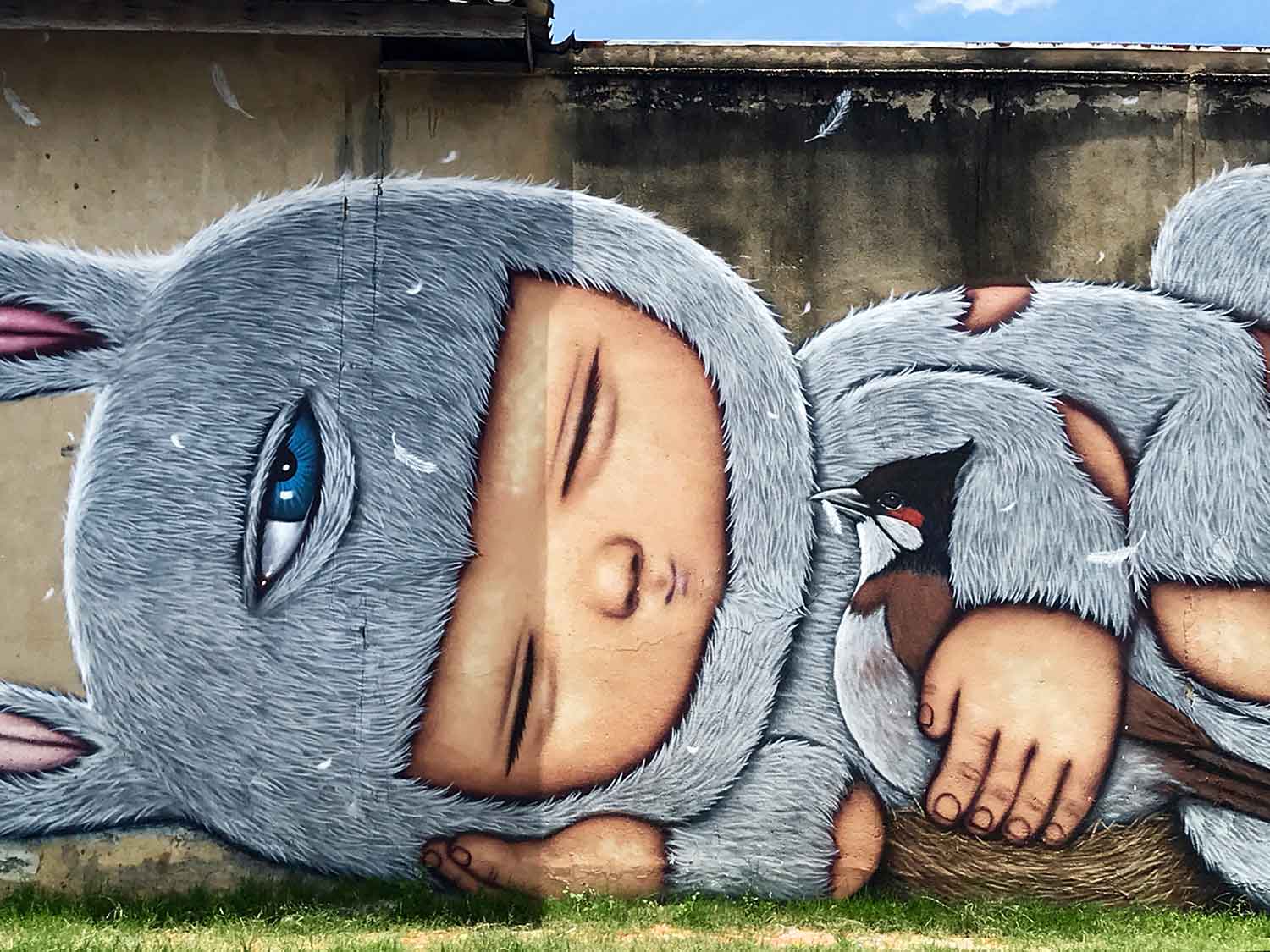 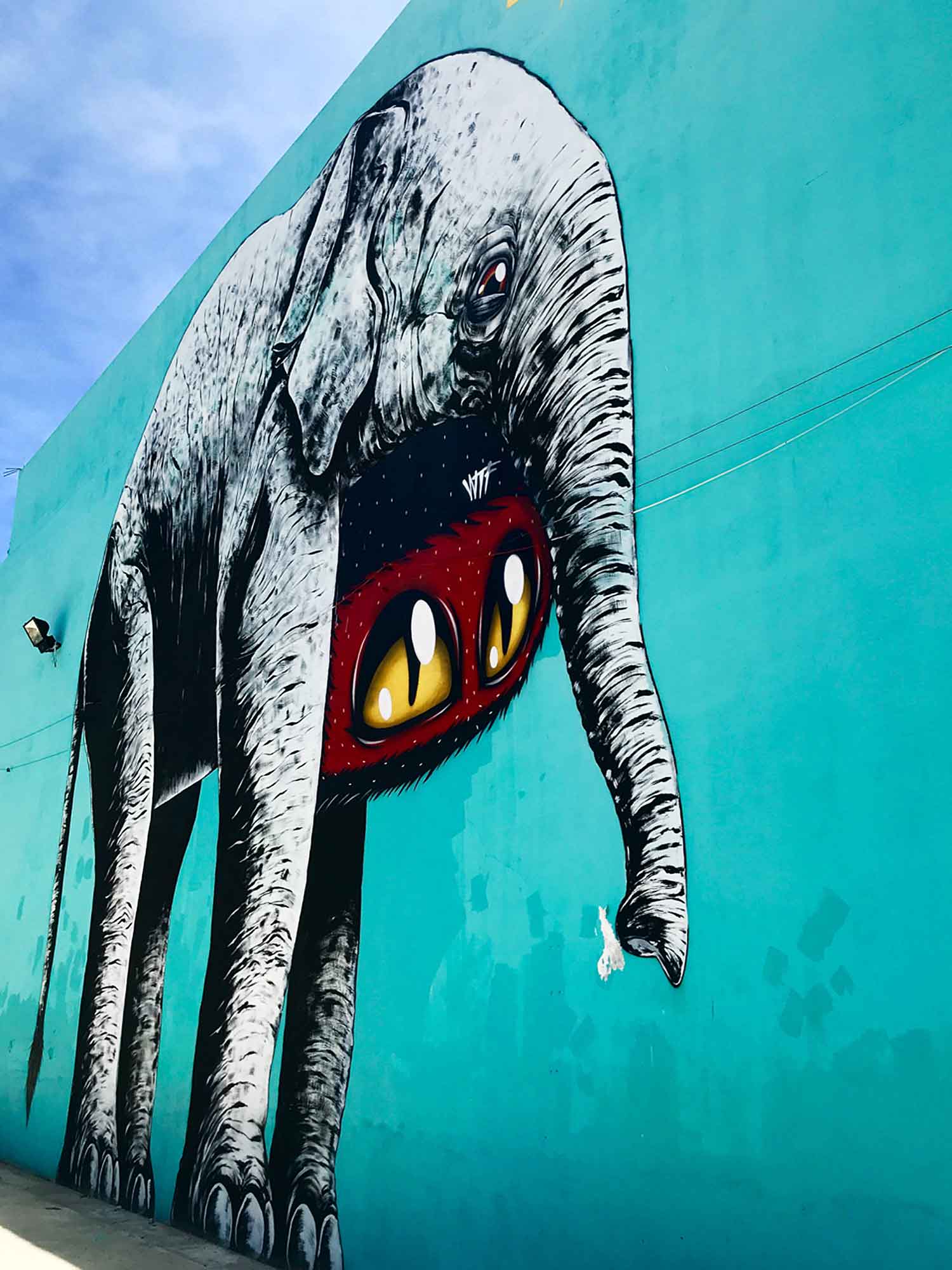 Wandering around the city of Yala, you may come across street art pictures on old buildings and walls. The project was initiated by a group of young entrepreneurs who were born in Yala and sponsored by the Yala Office of Commercial Affairs. The murals were painted by renowned local graffiti artists such as Alex Face, Mue Bon and October29. They expressed their ideas under the theme ‘Bird City Street Art’. More than 15 pictures murals painted and you can find them along Nuan Sakul 1 and Nuan Sakul 2 streets.

Chirasak recalled that when he settled in the village with his parents in 1974 the area was a dense forest. After relocating, they planted rubber trees and fruit trees like durian, longkong and mangosteen.

During the first seven years, they couldn't harvest latex or fruit. Their main income came from gold panning. But today the traditional way of finding gold is extra income. The activity recently became a unique selling point to promote the village.

Three years ago, Ban Phu Khao Thong Municipality wanted to launch a tourism programme. They introduced a kayak service along the Sai Buri River. The activity became a hit for people in the South after being posted on social media, he said. "When many tourists arrived, we looked for more activities for them to do. Later, we introduce gold panning, trekking, a short walking trail to a gold mining tunnel and homestay service," he said.

Although the violent unrest in the Deep South may shake people's confidence in visiting Narathiwat, Ban Phu Khao Thong is at peace. You won't feel like you are in the South because people speak the Isan dialect. They also serve Isan food like som tam and play molam (Isan folk music) to entertain their guests.

In addition to Narathiwat, you may combine a day trip to Yala, the neighbouring province. The city of Yala is small and has some tourist highlights such as Street Art, inspired by Penang Street Art in Malaysia. Another place worth a visit is the traditional batik learning centre of Sri Yala Batik Group. 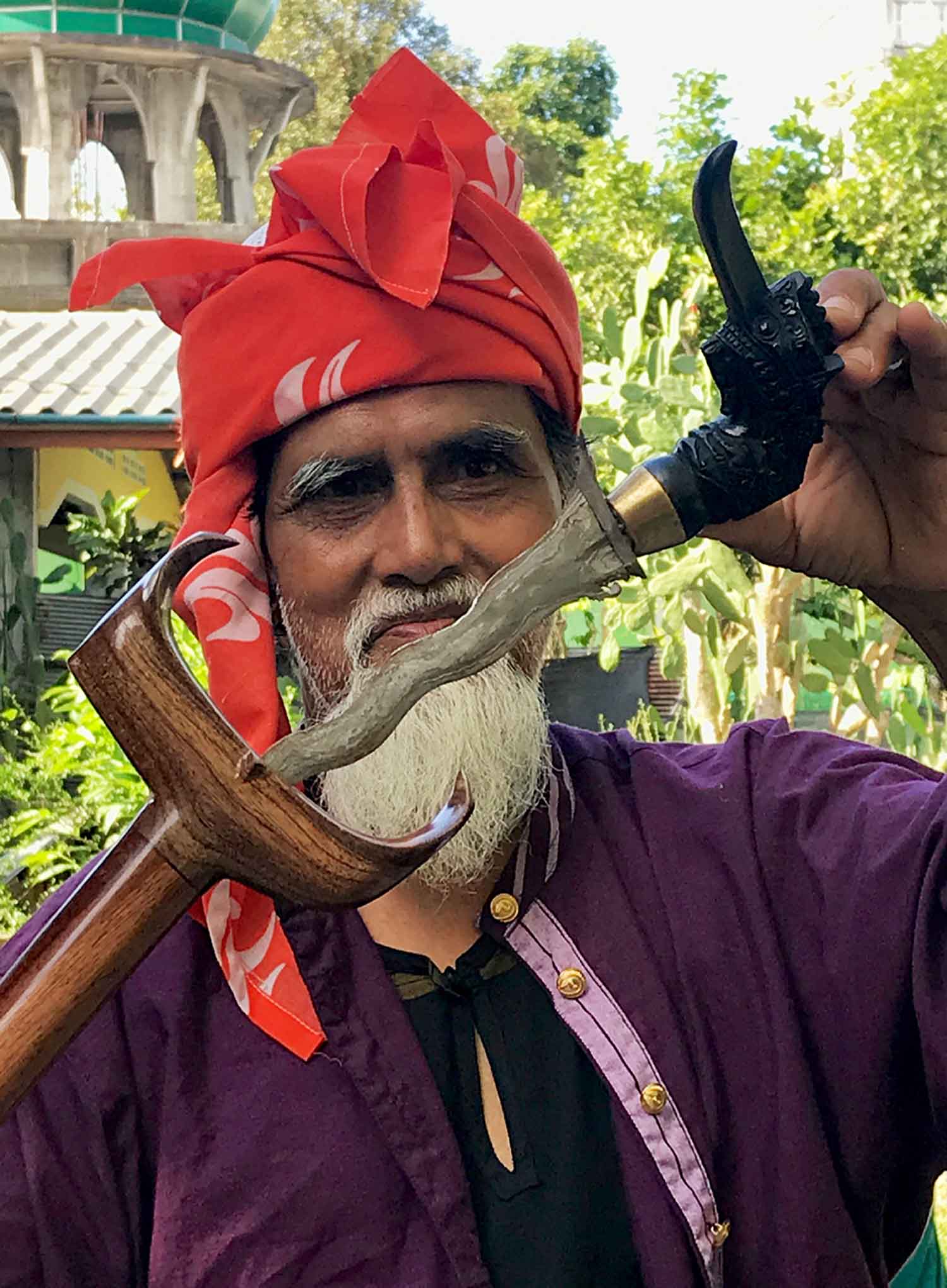 Tiphali Atabu, 68, is a veteran kris craftsman from Yala’s Raman district. In 2003, he founded the Kris Raman Craftsmen Group in his hometown and opened his home as a learning centre. The wavy-edged blades he creates have a unique design. He crafts the shape of each handle into the head of a phangka, a bird in literature similar to a fish-eating nok kraten, or kingfisher. In the old days, kris identified social status, said Tiphali. A general, for example, had a kris with the head of a bird decorated with gold or gems and the blade had seven curves, while a kris for a commoner was not decorated with any precious ornament and the blade had only five curves. 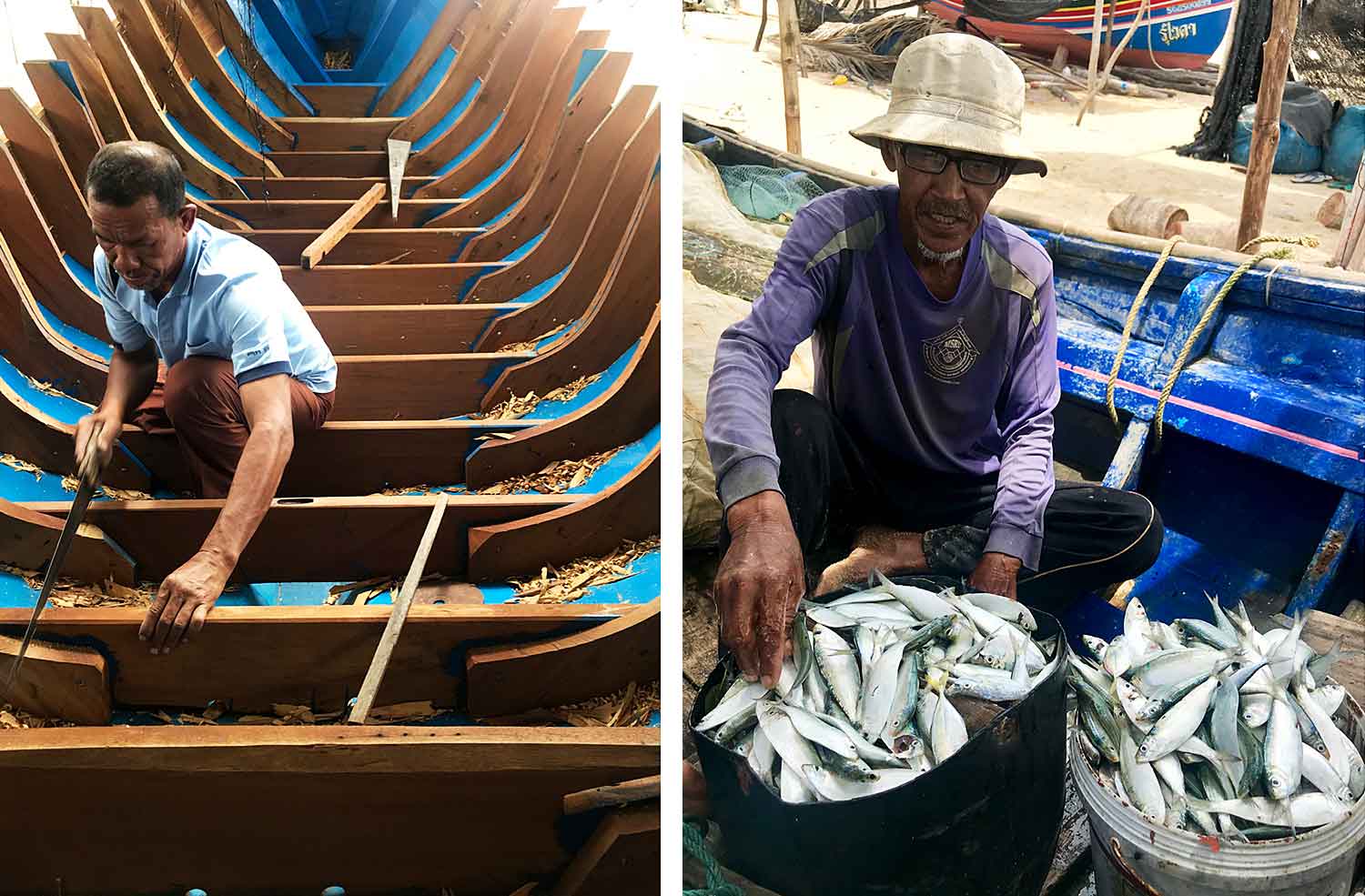 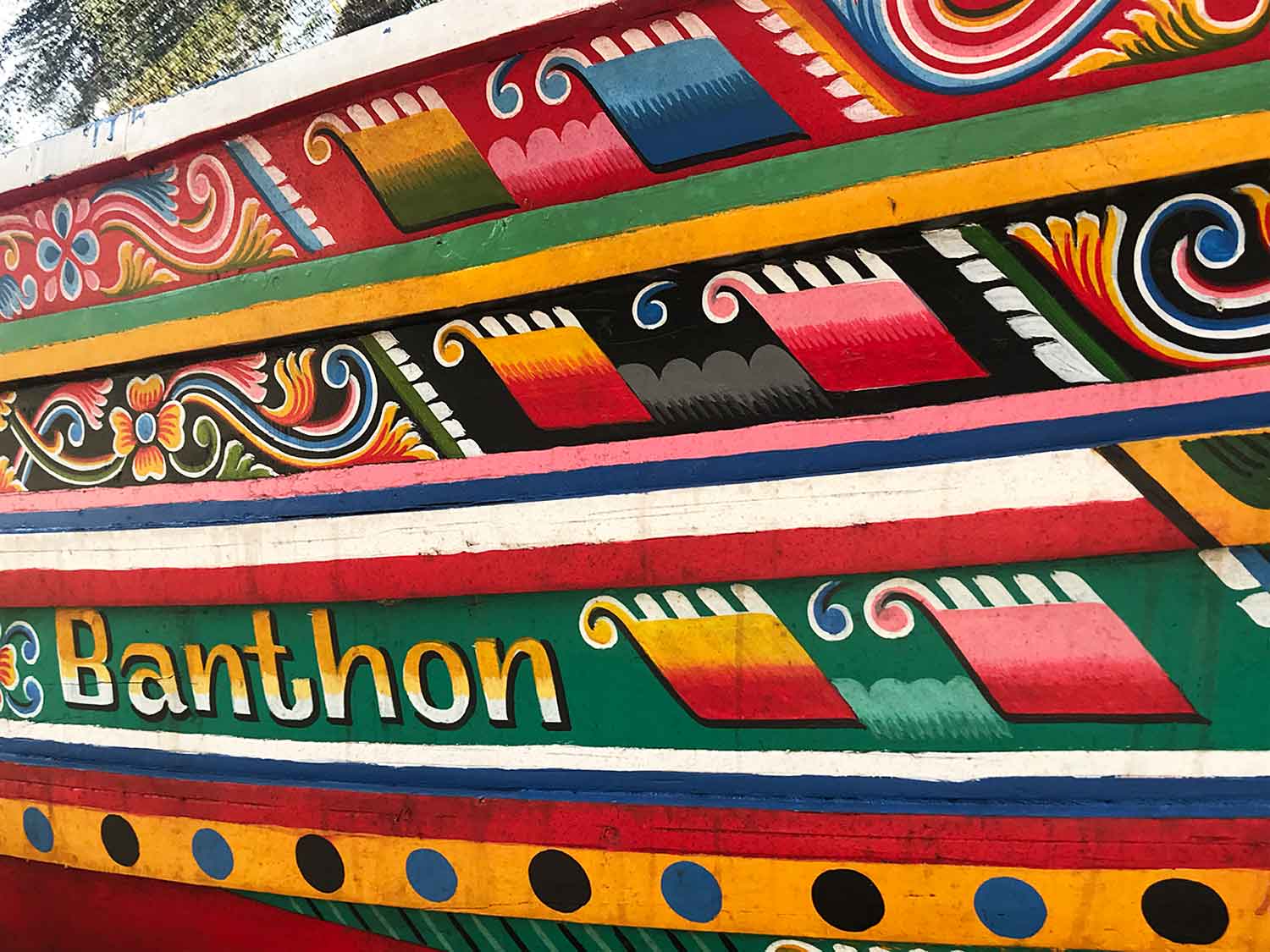 Ahamat Salae is a master builder of kolae boats in Ban Thon, Narathiwat. He learned the skill from his father and today passes it on to his son. Kolae are a traditional fishing vessel in the South. Ahamat has built more than 100 boats during the past 37 years. The wooden boat is made of takhian (white thingan) planks. The length starts from 2-14m, excluding bow and stern. The kolae boats are known for their colourful motifs. Ban Thon is a fishing community. Seen in the picture is a fisherman who has just returned with his kolae. He can harvest about 40kg of pla lang khieo (herring). The fish is popular for making fish crackers. 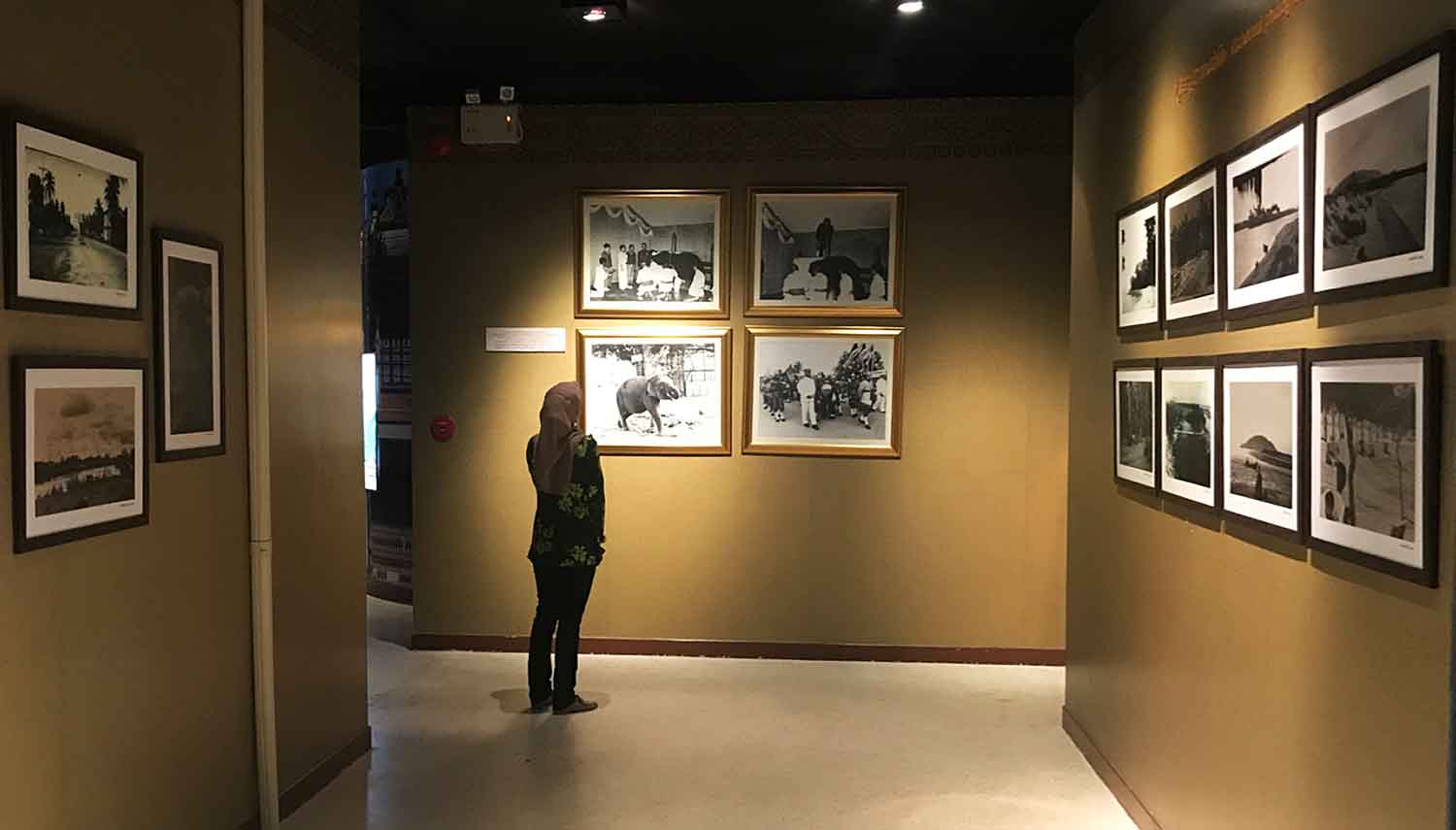 Located in the old City Hall, the twostorey Narathiwat City Museum is a good start for the first-time visitors. Every visitor is asked to observe a multimedia presentation about the province. The exhibition hall on the ground floor tells stories about the region’s history, natural resources, way of life and religions. The second floor houses a room to honour HM King Maha Vajiralongkorn Phra Vajiraklaochaoyuhua, royal projects of King Rama IX and HM Queen Sirikit the Queen Mother, local wisdom, musical instruments, food and toys.

The last stop that you may like is Ban Balukaluwa in Yala's Raman district. The community is a bit remote. It is home to a rare occupation -- kris making. You may visit the Kris Raman Group led by Tiphali Atabu, the kris master, to learn how to make the wavy-edged dagger or to see him perform a traditional kris dance.

I always feel fascinated whenever I have a chance to visit the Deep South. The charm of unspoiled nature and the hospitality of people makes me want to go back repeatedly. The trip to Narathiwat and Yala was not my first and surely not my last. 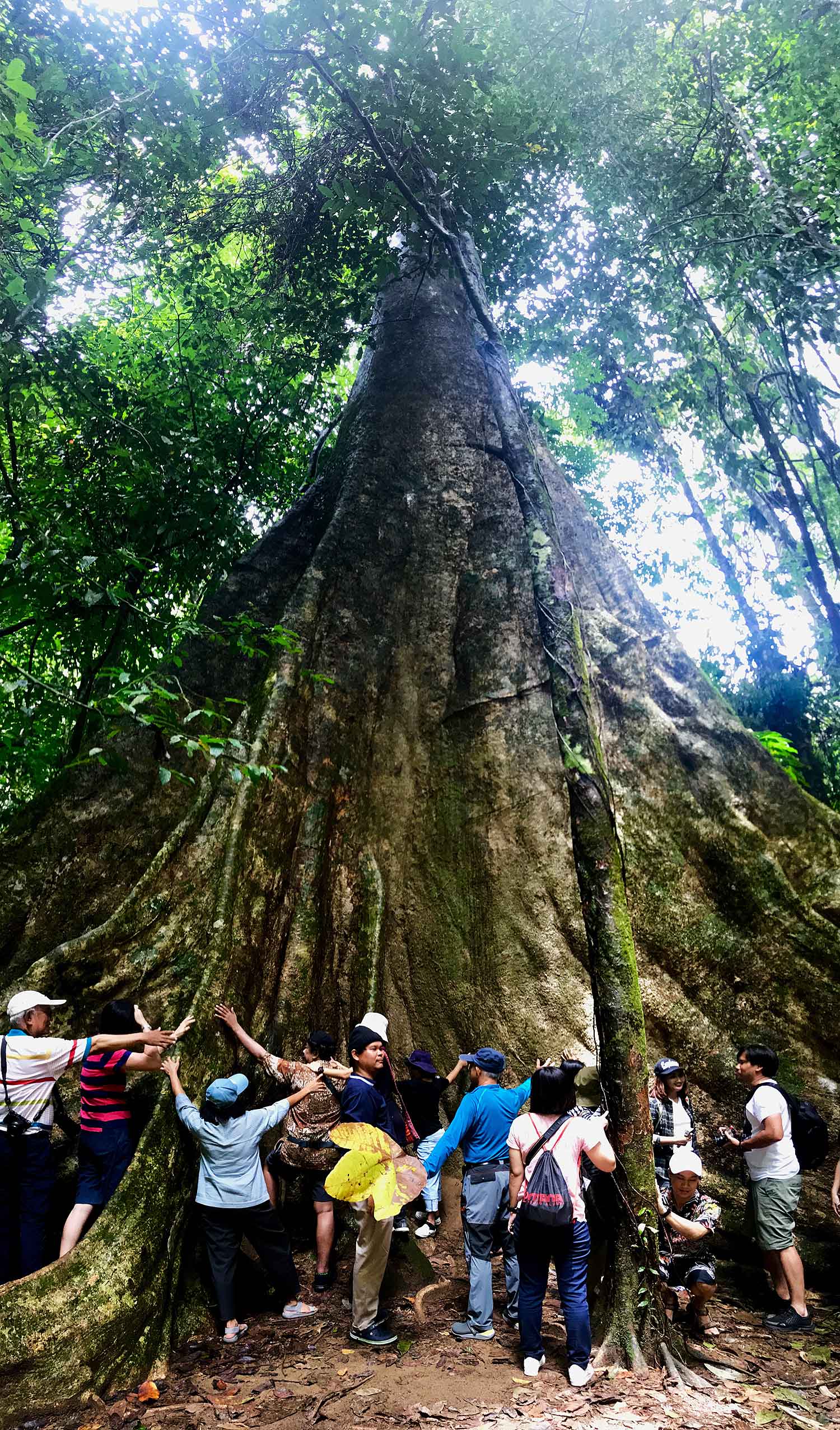 This large Sompong tree (Tetrameles nudiflora) is found in the Hala Bala Wildlife Sanctuary and is a highlight of tourist activities in Ban Phu Khao Thong in Narathiwat. Visitors can trek for about 10 minutes to reach the tree. Its buttressed trunk is quite large and can be circled by 27 people holding hands. Locals believe that the tree is more than a century old. 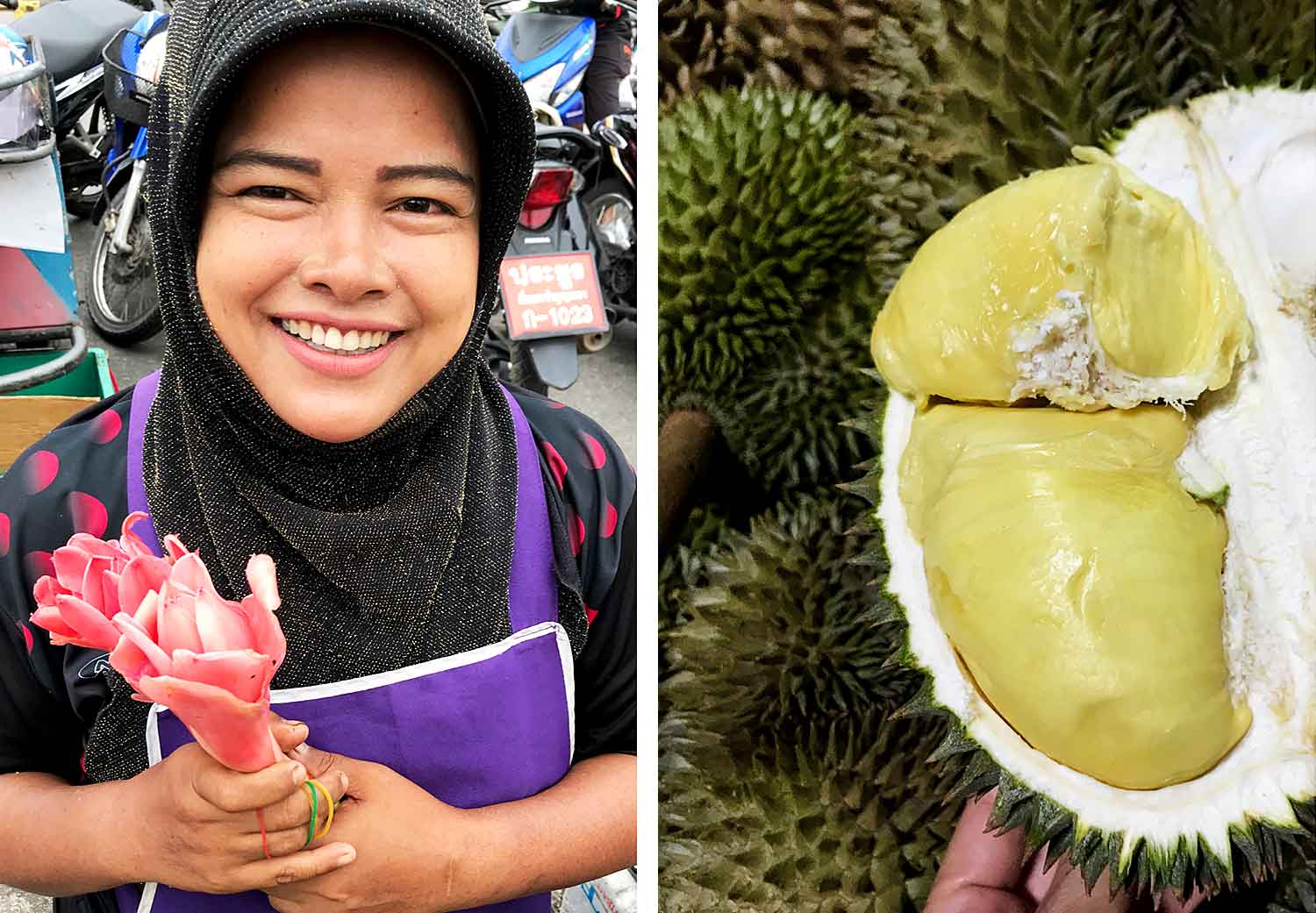 Narathiwat’s Tesaban fresh market is quite crowded in the morning. Seafood is fresh and cheap. You can also find food stalls with tables to try local food. I saw various unfamiliar snacks and fruits like tiny-yellow jampuling or mafai ling fruits (Baccaurea cordata) and rangkhae or mafai pa (Baccaurea scortechinii). The vendor encouraged me to try the fruit instead of asking me to buy. Most of the vendors I talked to asked me the same question about where I came from. They were glad to see visitors and even posted for my camera with a sweet smile. 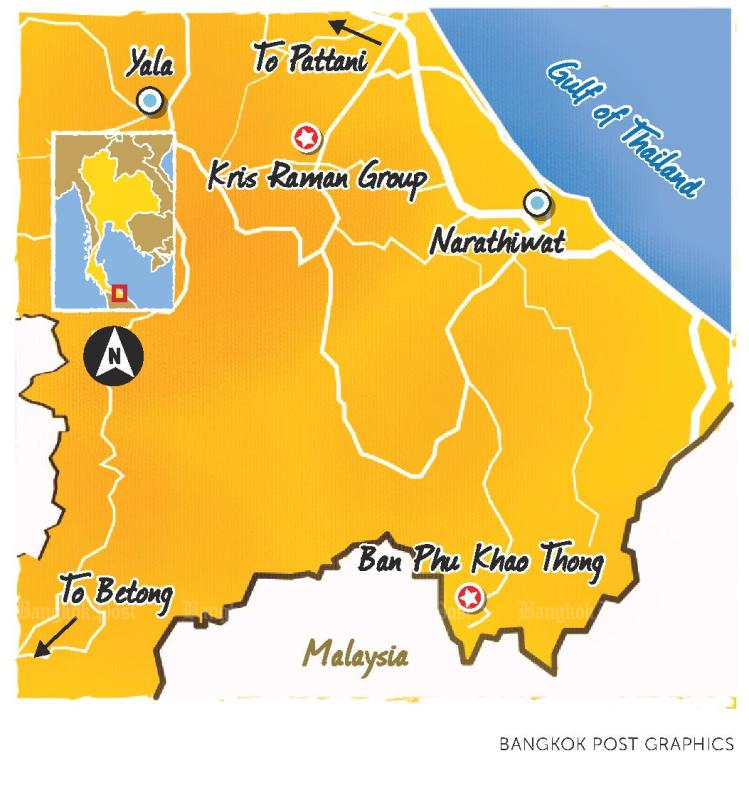