published : 18 Nov 2019 at 19:21
writer: DW News
People sit at a cafe in a flooded street during a period of seasonal high water in Venice on Sunday. (Reuters photo)

Venice is in danger of losing its Unesco World Heritage status after this week's extreme flooding, according to the body's director, Mechtild Rossler. At the same time, she offered the lagoon city immediate aid.

Venice has enjoyed the special protection of the Unesco World Cultural Organisation for 32 years, but this might be about to change. "Venice is in danger of losing its status," warned Unesco World Heritage Centre director Mechtild Rossler, adding that "Venice must be careful."

It is not actually the Paris-based World Heritage Centre, which the German scientist has headed since 2015, that decides on a revocation, but rather the Unesco World Heritage Committee. But Unesco is already paying close attention to the situation in the northern Italian port city. "We are waiting for Italy's report," says Rossler. "Then we we will present our analysis to the committee."

Even before the recent flood disaster, Venice mayor Luigi Brugnaro already been informed that the results of the analysis could potentially be negative: "In 2015, we proposed putting Venice on the 'red list,'" says Rossler. The World Heritage center said back then that if certain requirements were not met, "there would be a high probability that the city would be put on the danger list."

In September 2019, Brugnaro traveled to Paris with a large delegation. "Venice authorities got the message," Rossler says. "Otherwise they would not have appeared at Unesco — that is absolutely clear."

The Unesco so-called Monitoring Mission encountered critical issues in Venice as early as 2015. One major issue is the city's tourism management.

More than 22 million visitors come to Venice every year, a fact that has dire consequences. Only about 55,000 inhabitants still live in the city center, compared to 175,000 in 1951. "We don't want a museum city, but a lively city where people can actually live," says Rossler.

On the other hand, Venice depends on international tourism — a conflict that is difficult to resolve and that the Unesco expert is aware of. 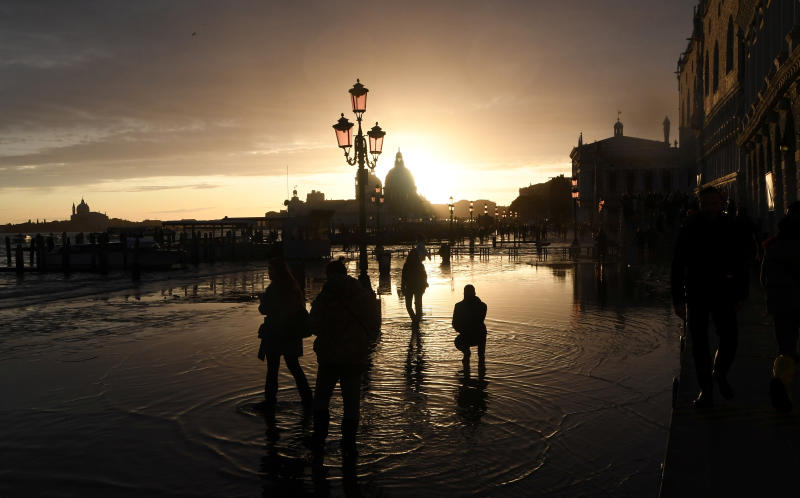 People are silhouetted in sunset during high tide in Venice on Sunday. (Reuters photo)

In addition to overtourism, Unesco is wary of the giant cruise ships that regularly sail through the Canale Grande, carrying up to 6,000 passengers. "The ships cause erosion, their waves damage the structures," Rossler says.

A flood wave protection system, with movable barriers, has been under construction for years. However, the completion of the multi-billion-dollar MOSE project is stalled, not least because of a corruption scandal. In the event of flooding, the system of mobile gates is intended to hold back the tidal waves of the Mediterranean. But even technology cannot stop climate change.

Unesco has listed the consequences of climate change for the World Heritage Sites in the Mediterranean region. Heavy rainfall and rising sea levels are only the most visible effects, according to the study. Put together with strong winds that constantly push water into the lagoon, both might have been the reason for the extreme water levels of the recent Acqua Alta that reached a worrying 1.87 metres above sea level on Wednesday night, the highest in 53 years and the second highest in 100 years. St Mark's Basilica stood in water, its 9th century crypt flooded. The city expects immense damage was done to the structure of many historic buildings.

That is not all. "We are seeing climate phenomena that we didn't see to such a degree 10 years ago," warns Rossler, adding that one danger stems from the fact that worms from warmer waters have now reached northern Italy. "They attack the wood on which Venice is built."

It is already clear that Venice is particularly affected by climate change. The World Heritage title that has protected the city on stilts since 1987 could turn out to be a boomerang due to the unchecked tourist rush. Would Unesco ultimately leave the lagoon city to its problems if it withdrew the World Heritage title? "It shouldn't happen at all," says Rossler. "The fact that we are not yet in a position to protect Venice comprehensively is a confession of failure." The Venetians, the Italian authorities and the international community are all called on to protect the city, she says. "We are all in this together."

Meanwhile, the situation in Venice remained tense on Friday. Late in the morning, the water level was 160 centimetres above normal, according to the municipality. "Another day of alarm", mayor Luigi Brugnaro wrote on Twitter. He called on the residents to be careful, and watch out for strong winds. Flooded Piazza San Marco is closed and so are schools, as well as the Doge's Palace and many other cultural institutions.

From Paris, Rossler is ready to help: "If Venice asks us, we are ready."