The beep of the horn was quite loud. It came from a flat-bottom electric-powered boat cruising along Klong Phadung Krung Kasem. The boat operator gave the signal to let passengers on the Hua Lamphong pier know of its arrival. 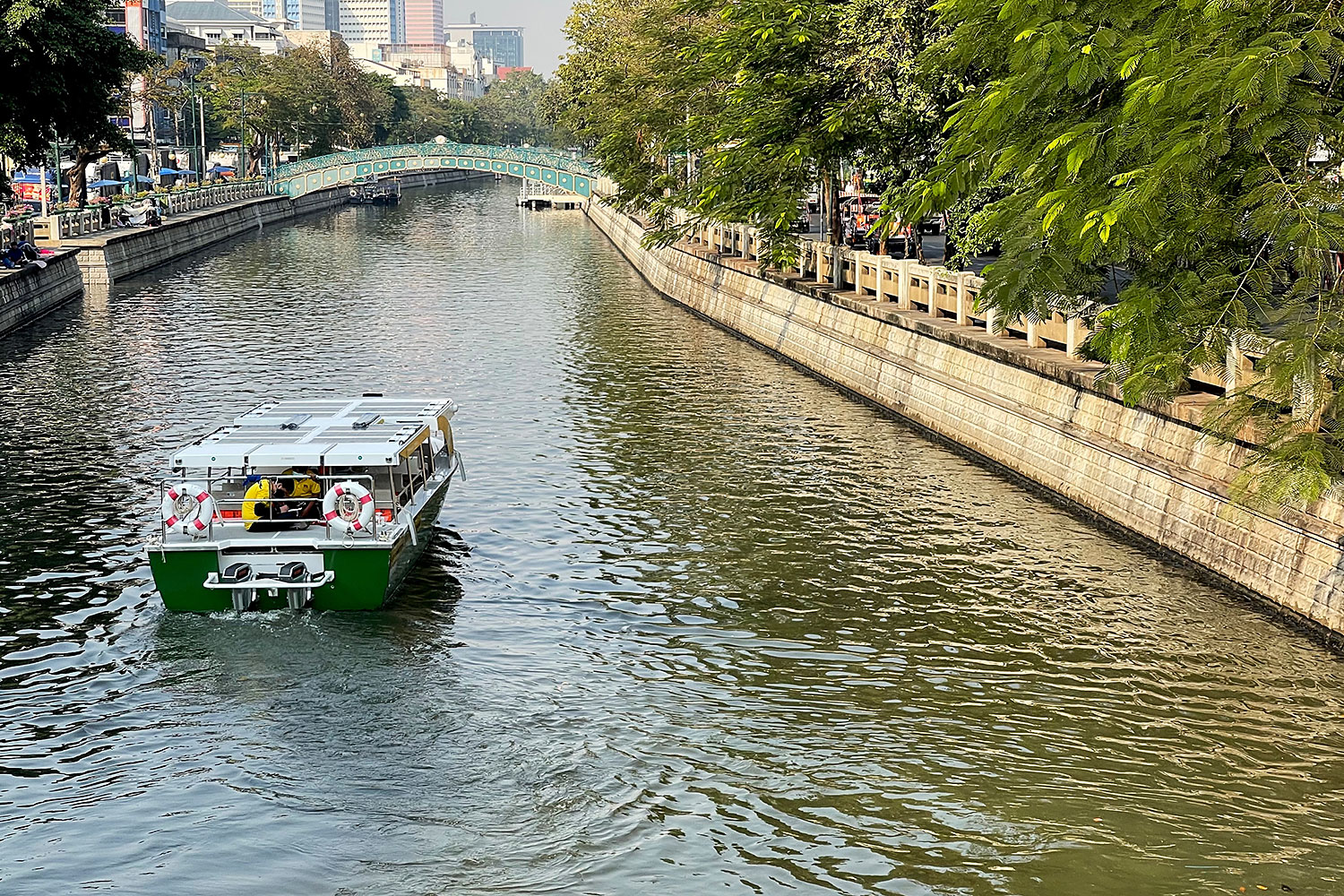 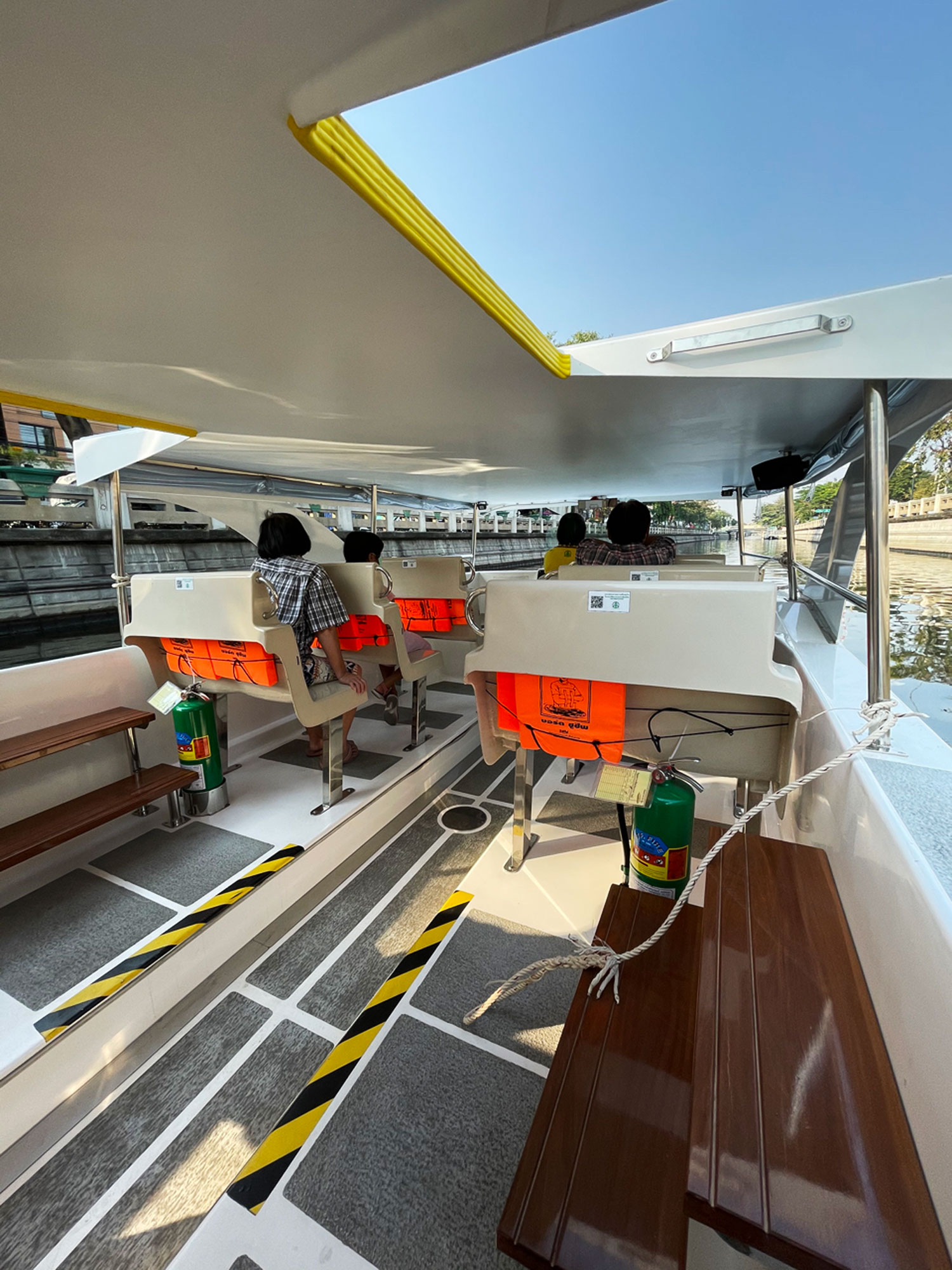 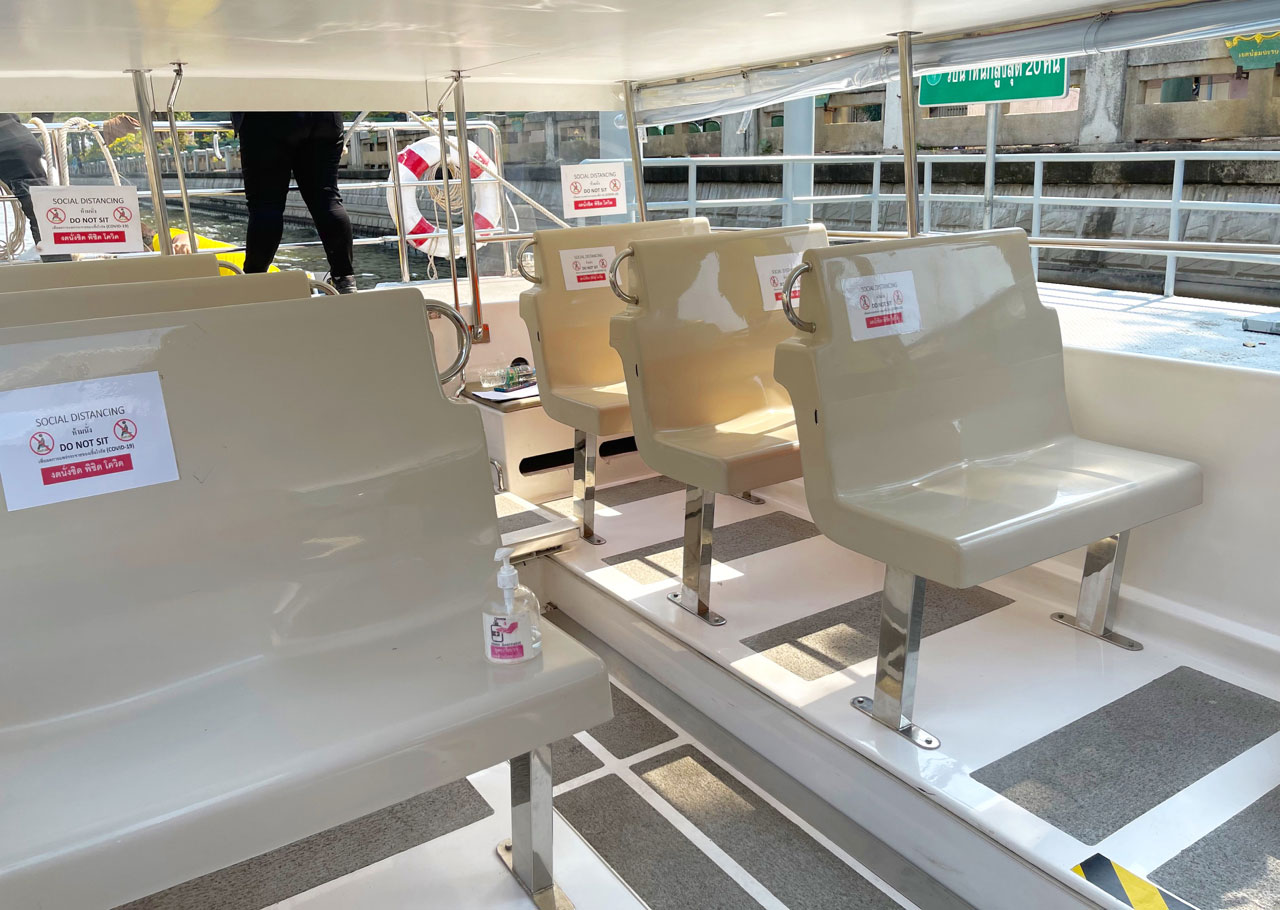 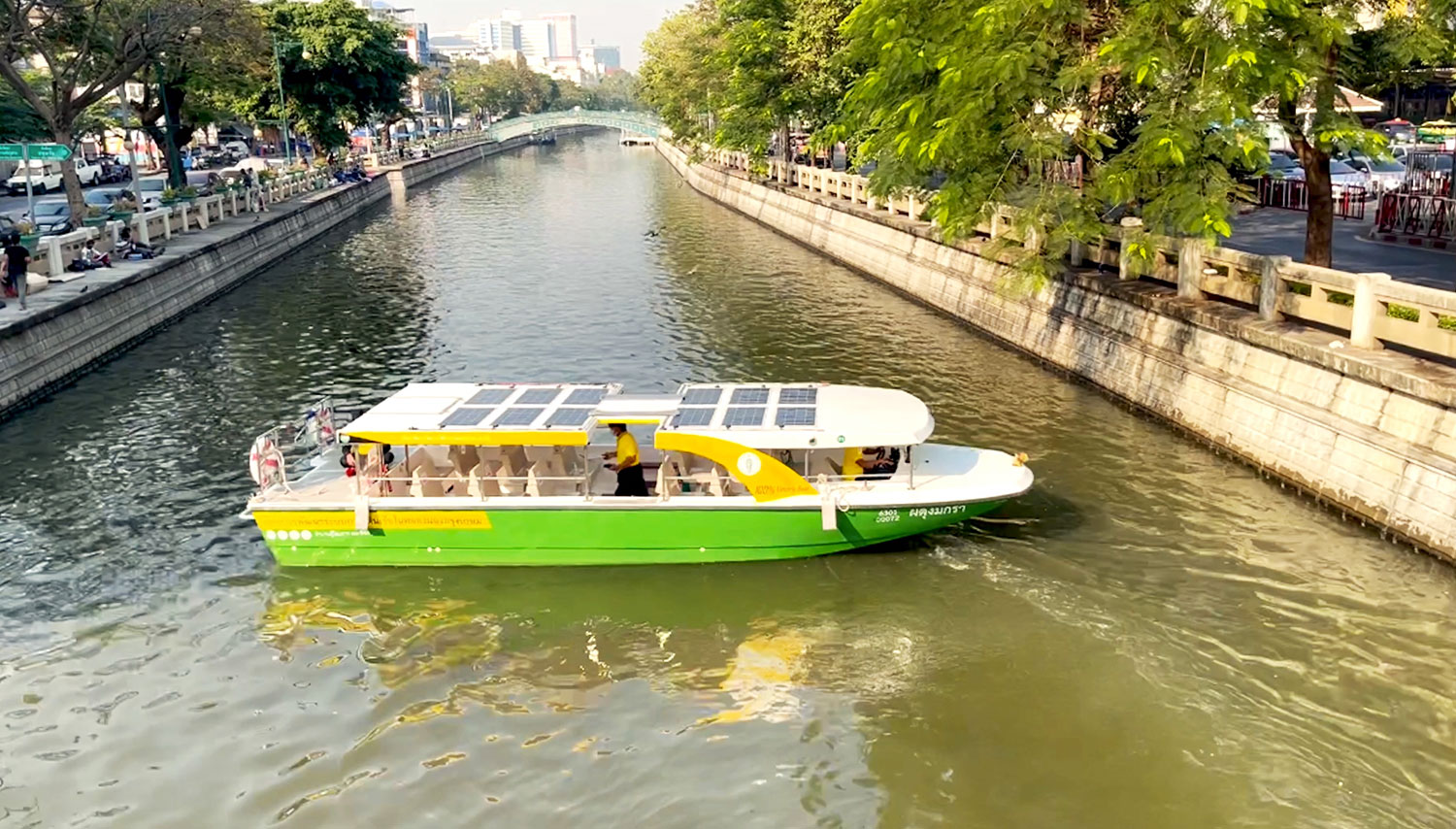 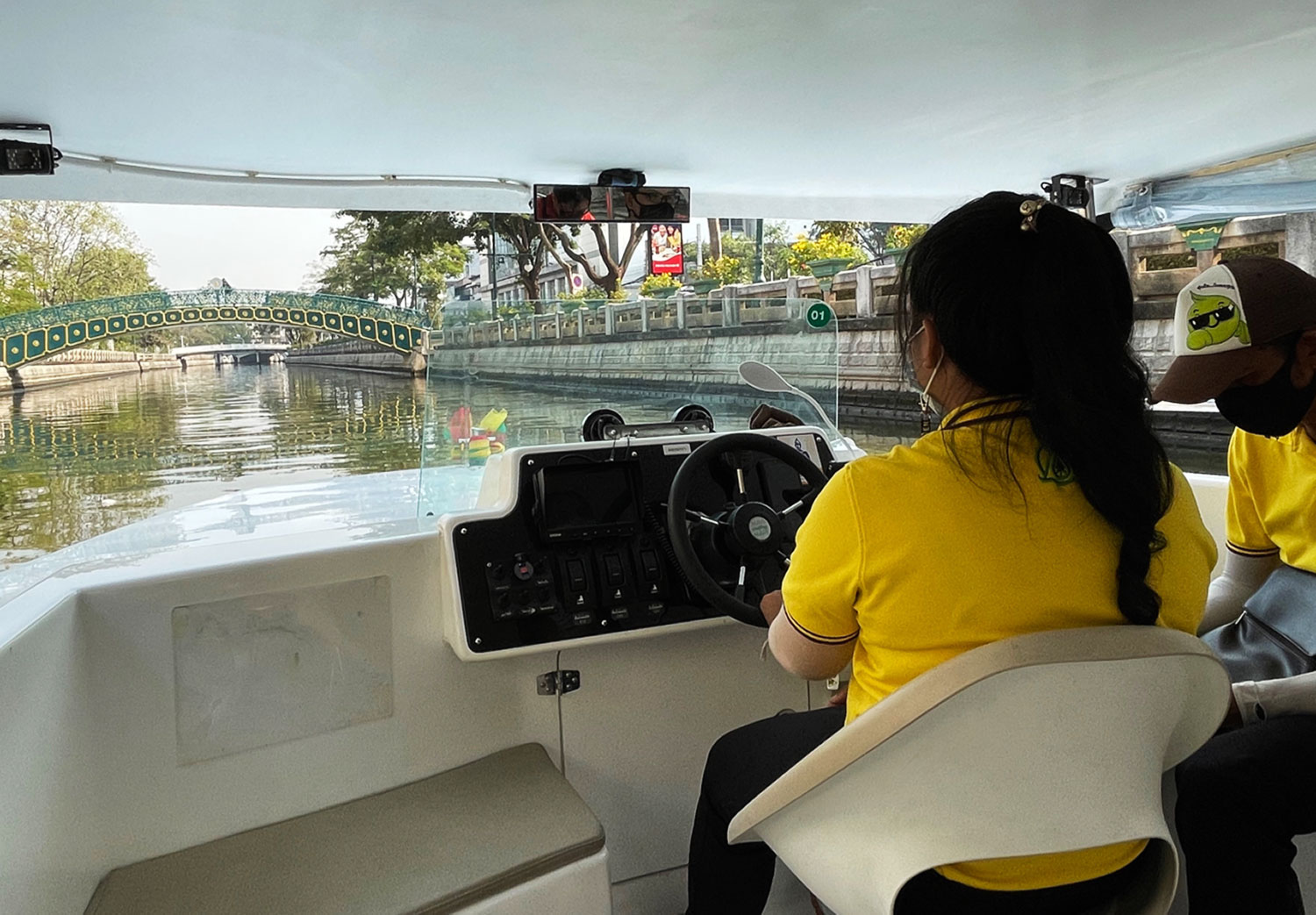 The solar-powered boat is operated daily by Krungthep Thanakom of the BMA and available between Hua Lamphong Railway Station pier and Talat Devaraj pier. The service is available every 15 minutes from 6-9am and 4-7pm. During midday or from 9.30am to 4pm, the boat will leave its station every 30 minutes. During the weekends, the timetable is almost like the weekdays except that the service starts at 8am. The service is free until the end of May. Commuters may connect to subway or train services after getting off at Hua Lamphong. For those who want to take the Chao Phraya Express boat, they can disembark at Talat Devaraj pier and walk to nearby Thewet pier.

I raised my arm high like the way I hailed a taxi on the street. The boat gradually approached the pier.

"Please come aboard and mind your head," said a crew member while securing the boat to the pier.

The entrance was located in the middle of the vessel. As the ceiling was low, I bent my head while taking the stairs to enter the boat. My boat operator was a woman. She wore a yellow short-sleeve polo shirt with a logo of Krungthep Thanakom, the business arm of Bangkok Metropolitan Administration, that manages the service.

The seats were arranged in two rows with 12 seats in total. Each seat was designed for two passengers but one space was reserved to offer social distancing during the Covid-19 pandemic. Thai Chana QR code was not available onboard or on the pier for passengers to check-in.

The boat had a few passengers. I picked the front row. The crew member approached me with a registration form on a clipboard. He asked me to sign my name, time of my entry, the pier that I embarked on and would disembark as well as my mobile phone number. He said the data would be used for alerting the passengers if there was an infection onboard.

The electric boat is a shuttle service between Hua Lamphong Railway Station pier and Talat Devaraj pier. The route is about 5km and has 11 stops including Yot Se, Ratchadamnoen Nok and Thewet piers. A one-way journey takes about 30 minutes.

The project was initiated in 2014 by Prime Minister Prayut Chan-o-cha whose aim was to return the city's atmosphere of "Venice of the East" by reviving boat transportation in a network of canals. In 2016, he launched a mass transport vision to link all transportation modes including Skytrain, subway, public buses and boats together, as part of the "Smart City" theme.

The trial for the boat service at Klong Phadung Krung Kasem began in September 2016 and was powered by fuel. Four years later, the vessel was upgraded to solar-cell electric power. The project officially kicked off on Nov 27. The service is free for six more months. In June, the fare will be 10 baht per trip.

The BMA has invested in eight electric boats, each costing 6 million baht. The fibreglass boat is 10m long and 3m wide. It is powered by 12 solar panels on its rooftop. It can accommodate up to 30 seated passengers. But during the pandemic, the maximum capacity caps at 15. The maximum cruise speed is 17kph.

"Next station is Nakhon Sawan pier, or Talat Nang Loeng. Does anyone want to get off?" asked another crew member who looked like a boat conductor. I raised my hand. Then he shouted: "Docking at Nakhon Sawan Pier. Passengers, please disembark."

The boat was slowly steering to the pier. While I was about to step off the boat, my head knocked on the ceiling. Bang. "Ouch! It hurts," I uttered. "Be careful. Bend your head," said the crew member. He also repeated the message to newcomers.

I wander around the Nang Loeng market before continuing my journey to my last station at Talat Devaraj pier to visit Wat Devaraj Kunchorn and Thewet plant market. When I walked back from Nang Loeng to the Nakhon Sawan pier, an employee of Krungthep Thanakom, who was stationed on the pier, checked my temperature with a temperature gun. On top of the chair with a writing pad, she had a hand sanitiser and a clipboard with a registration form. She asked me to sign the form. I waited for about 20 minutes for the boat.

I noticed that this pier and several others did not have seats for waiting passengers or a roof to offer shade or protect riders from rain. Some piers lacked proper wheelchair accessibility.

Despite the lack of those basic facilities, my journey along the waterway was quite pleasant. It was also good to see the old town of Bangkok from another point of view. You will see some old buildings including the office of the State Railway of Thailand and Government House, which is fenced by barbed wire.

Although I could smell the polluted water from time to time and spotted plastic waste floating in the canal, I saw fish and lively activities. Some people fished with nets, a rod or even a long plastic rope at some spots along the waterway.

I also liked the trip via the electric-powered boat as it was not that noisy like the diesel-engine ferries. Because of its low speed, I did not have to worry if the water will splash on me. I can sit straight and see the view, unlike the time when I took a long-tail boat plying along Klong Saen Saep. My experiences told me to cover my face with a hat or risk the splash of the smelly water. The e-ferry is not in a hurry so passengers can get on and off the boat at their own speed. In addition, the boat crew are polite.

The smooth service of the boat can be further developed. It can become a leisure cruise during the weekend with a tour guide. It is something the BMA can do to add value into its new cruise service. 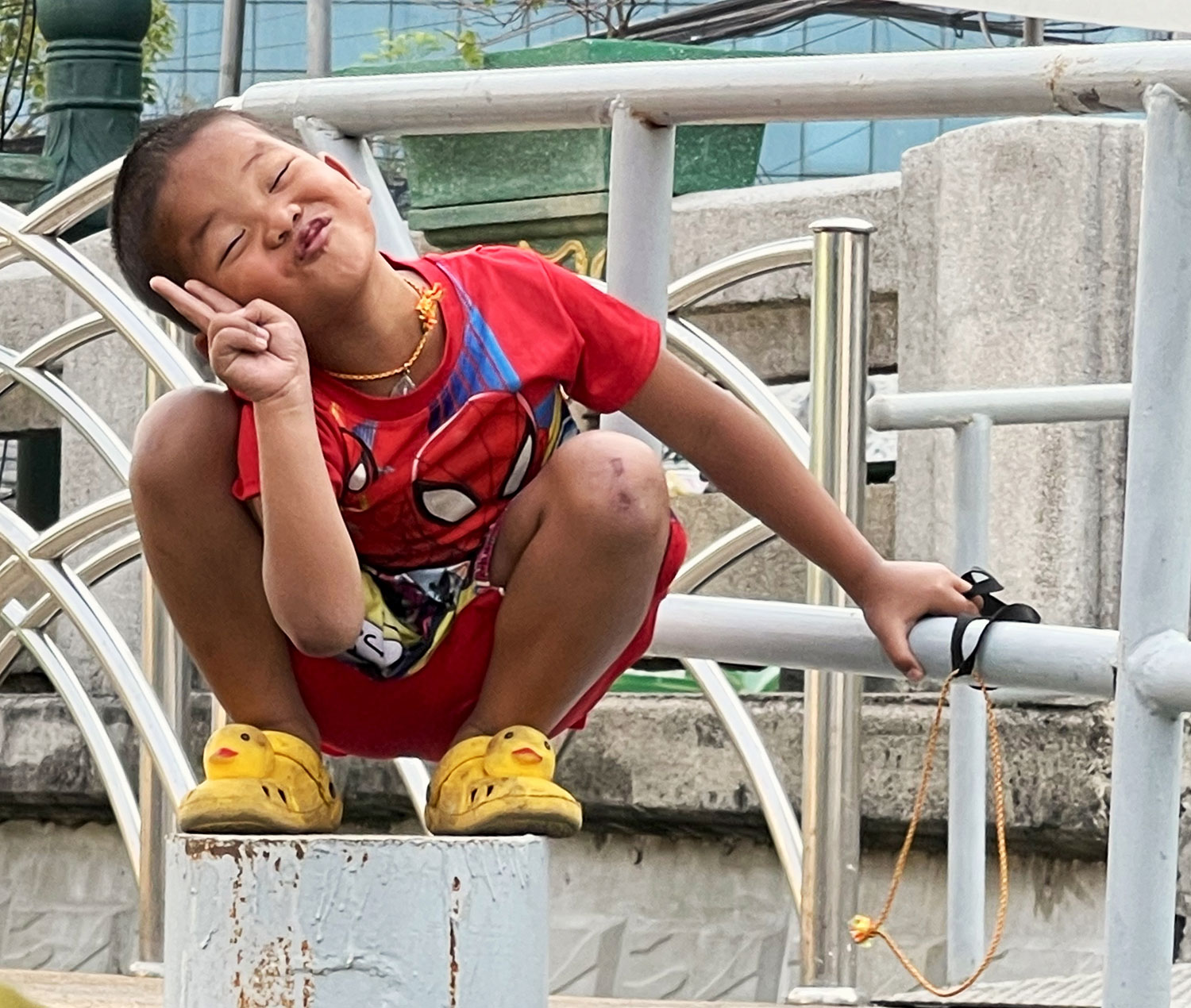 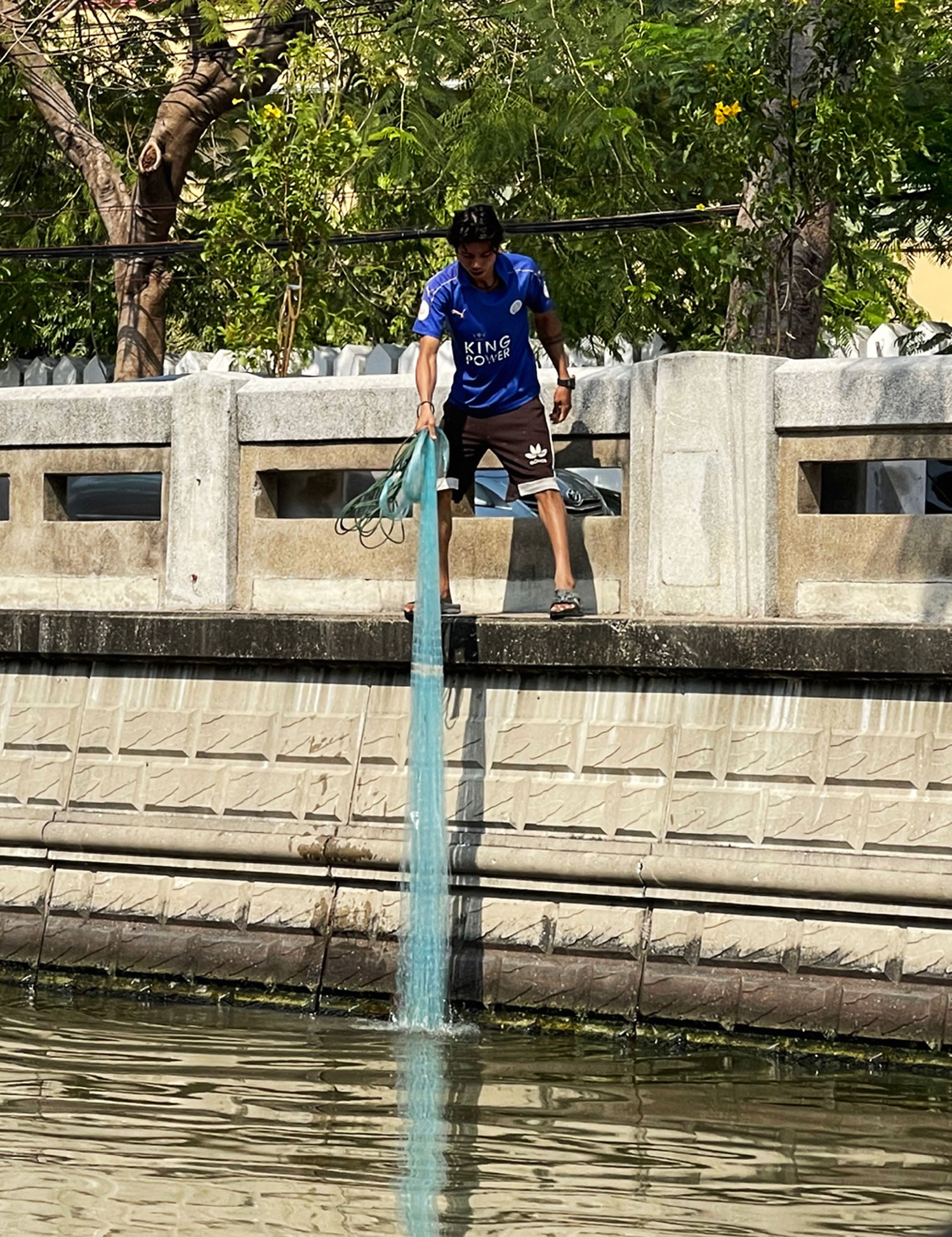 A child poses while the boat docks at the Thewet pier. Along the way, you may spot people fishing on the bank or even in the canal. Klong Phadung Krung Kasem was dug in 1851-1854, during the reign of King Rama IV. The canal was 20m wide, 3m deep and 5.5km long, connecting to the Chao Phraya at Wat Devaraj Kunchorn and Royal Orchid Sheraton Hotel at the other end. 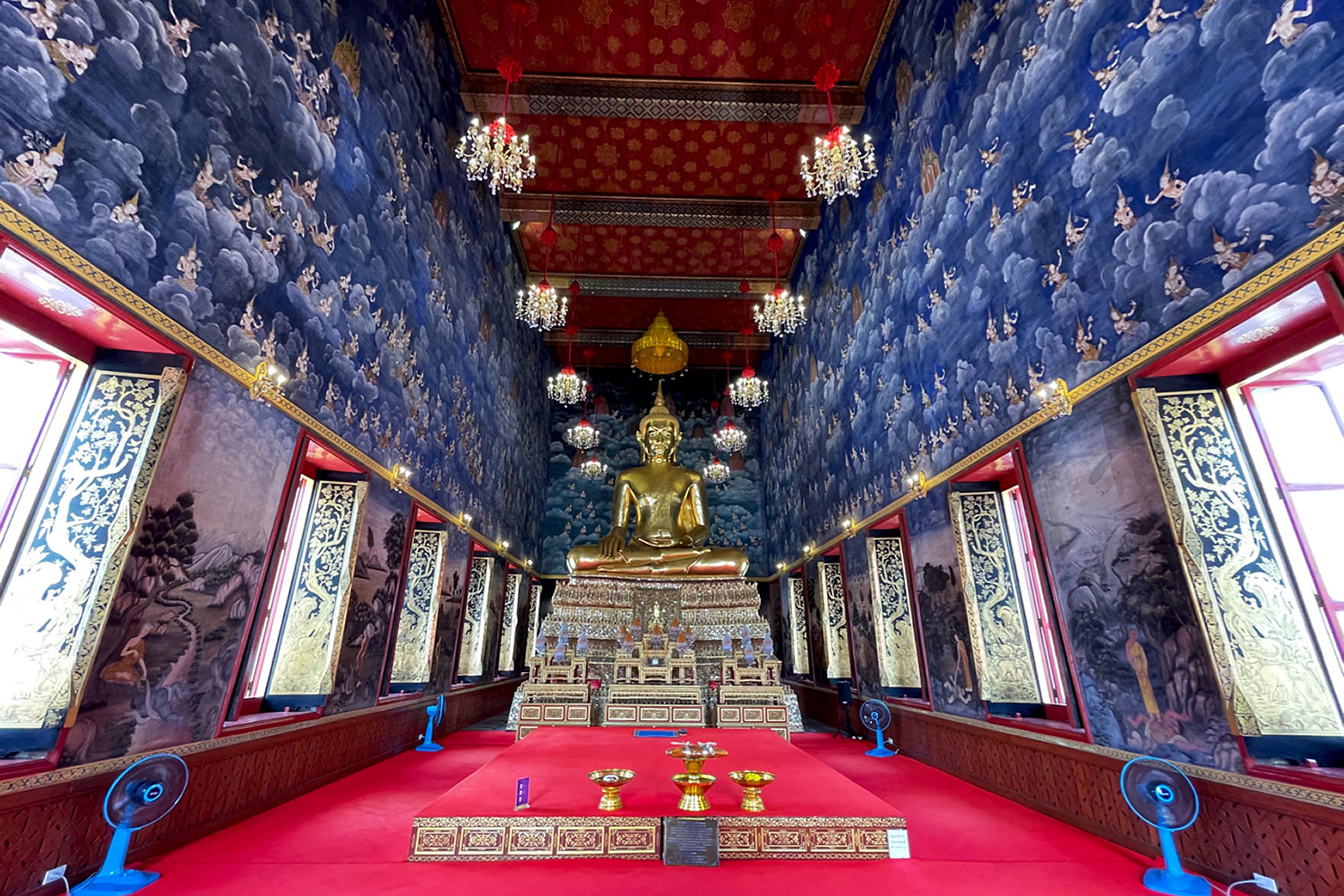 Located along the Chao Phraya, Wat Devaraj Kunchorn is an old temple built during the Ayutthaya period. It was restored during the reign of King Rama III by Prince Phitakdeves, a son of King Rama II. The ordination hall was built to house the revered Buddha statue Phra Buddha Devaraj Patimakorn in the seated posture. The seated Buddha sculpture is 5.65m tall and believed to be made during the Dvaravati period (6th-11th centuries). King Rama IV renamed the temple to honour the prince. From Talat Devaraj pier, you can walk to the temple by crossing the canal bridge and turn left to a small alley passing through a row of houses built along the banks of the canal for about 50m then turn right to the soi leading to the temple. There is also a riverside restaurant if you’re looking for an eatery with a view of Rama VIII Bridge. 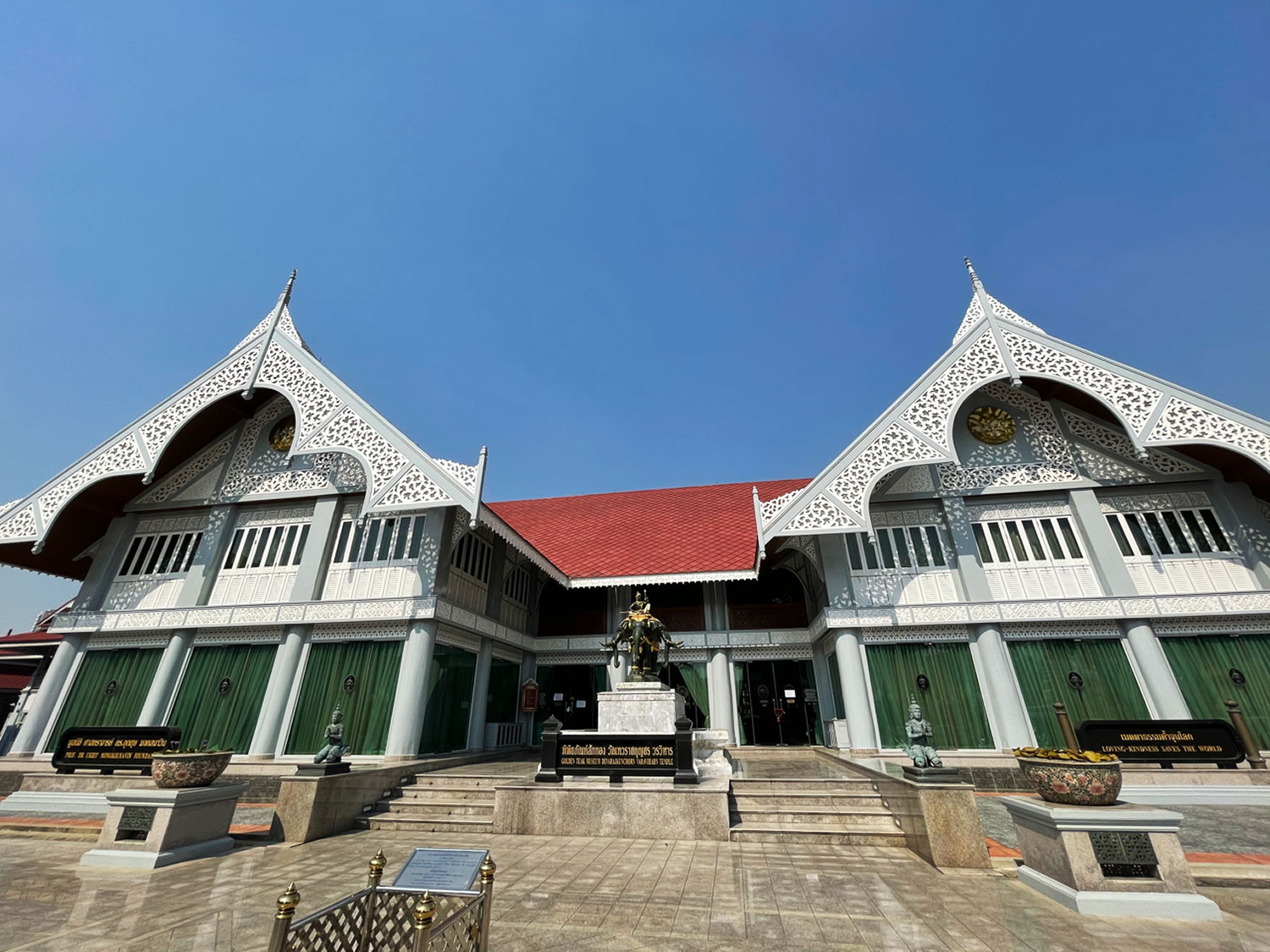 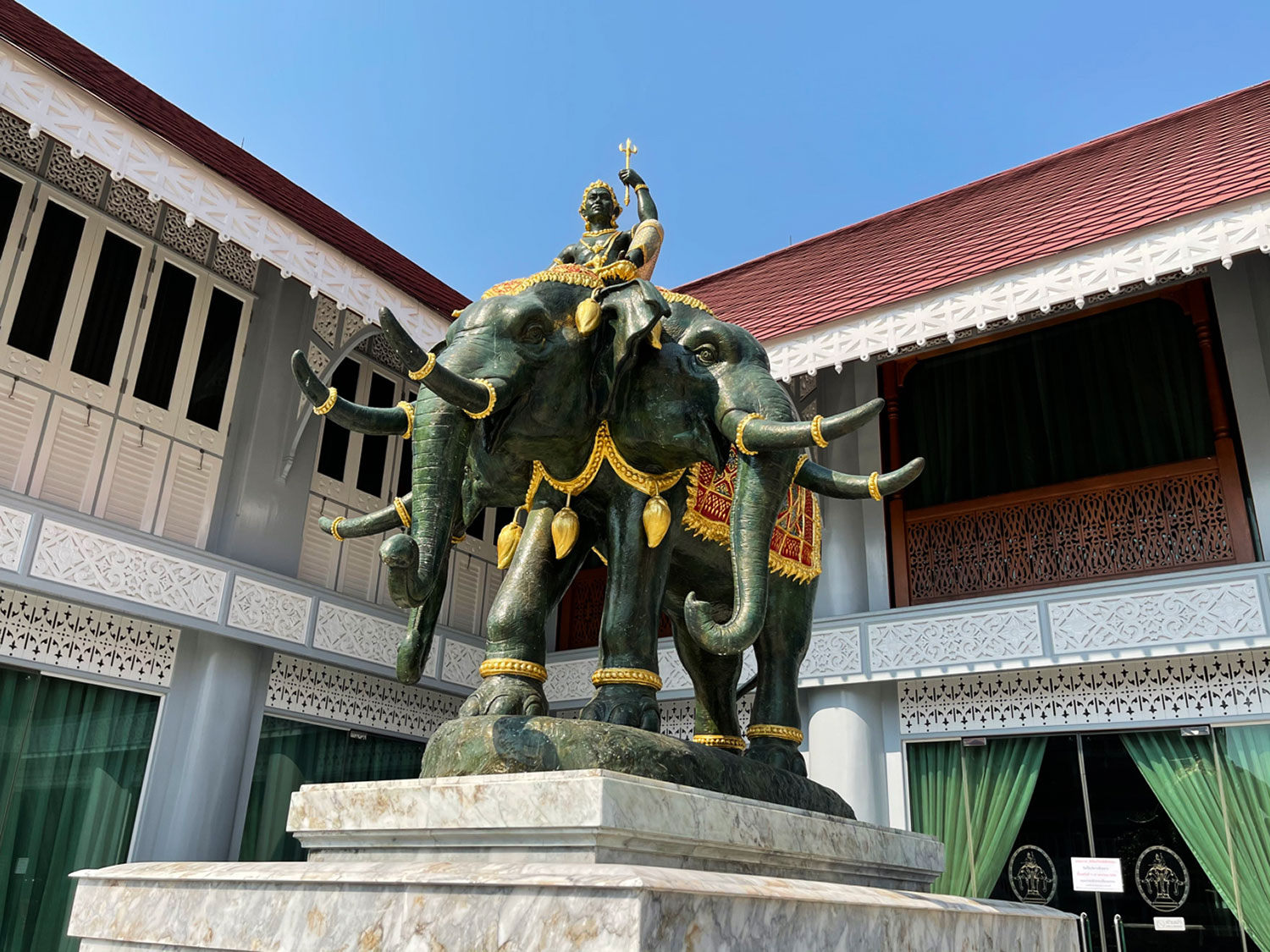 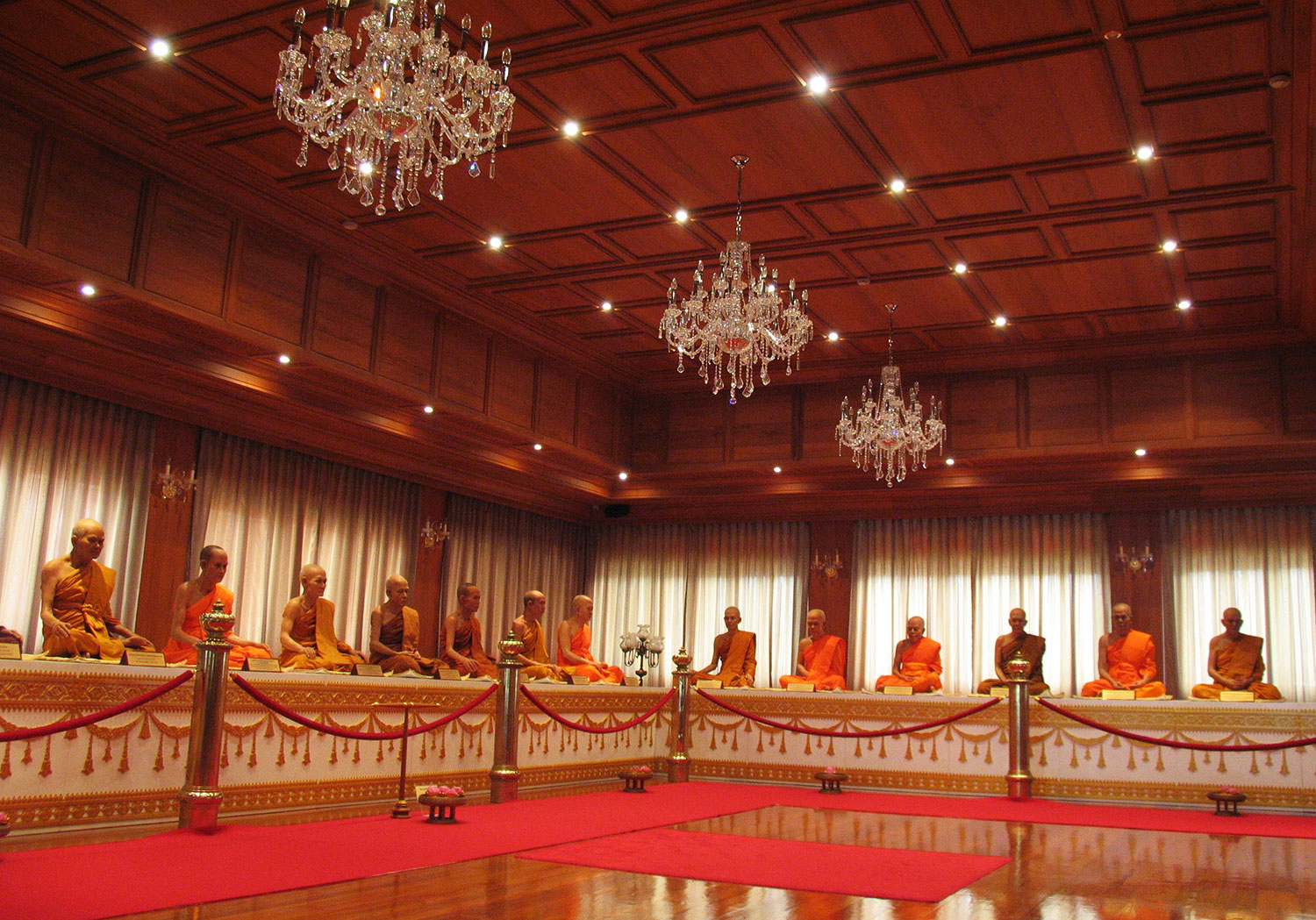 This beautiful house is the Golden Teak Museum located in the compound of Wat Devaraj Kunchorn. It was built in Phrae by using teak from 11 houses. The owner whose name was not revealed wanted to sell the house but was afraid that it would be torn down so asked the Professor Dr Ukrit Mongkolnavin Foundation to buy the house for conservation. In 1989, the house was renovated to its present structure. Dr Ukrit, who was also a former house speaker, donated it to the temple as a museum. The two-storey building is 16.75m in width and 30.15m in length. It exhibits the history of the house and teak wood, collections of Buddha images, the Lord Buddha’s relics and life-size figures of 18 supreme patriarchs from the Rattanakosin period. Another highlight of the museum is the beauty of the structure and its interior design. The museum is open daily from 10am to 5pm, but it is closed for the month of January due to the second outbreak of Covid-19. 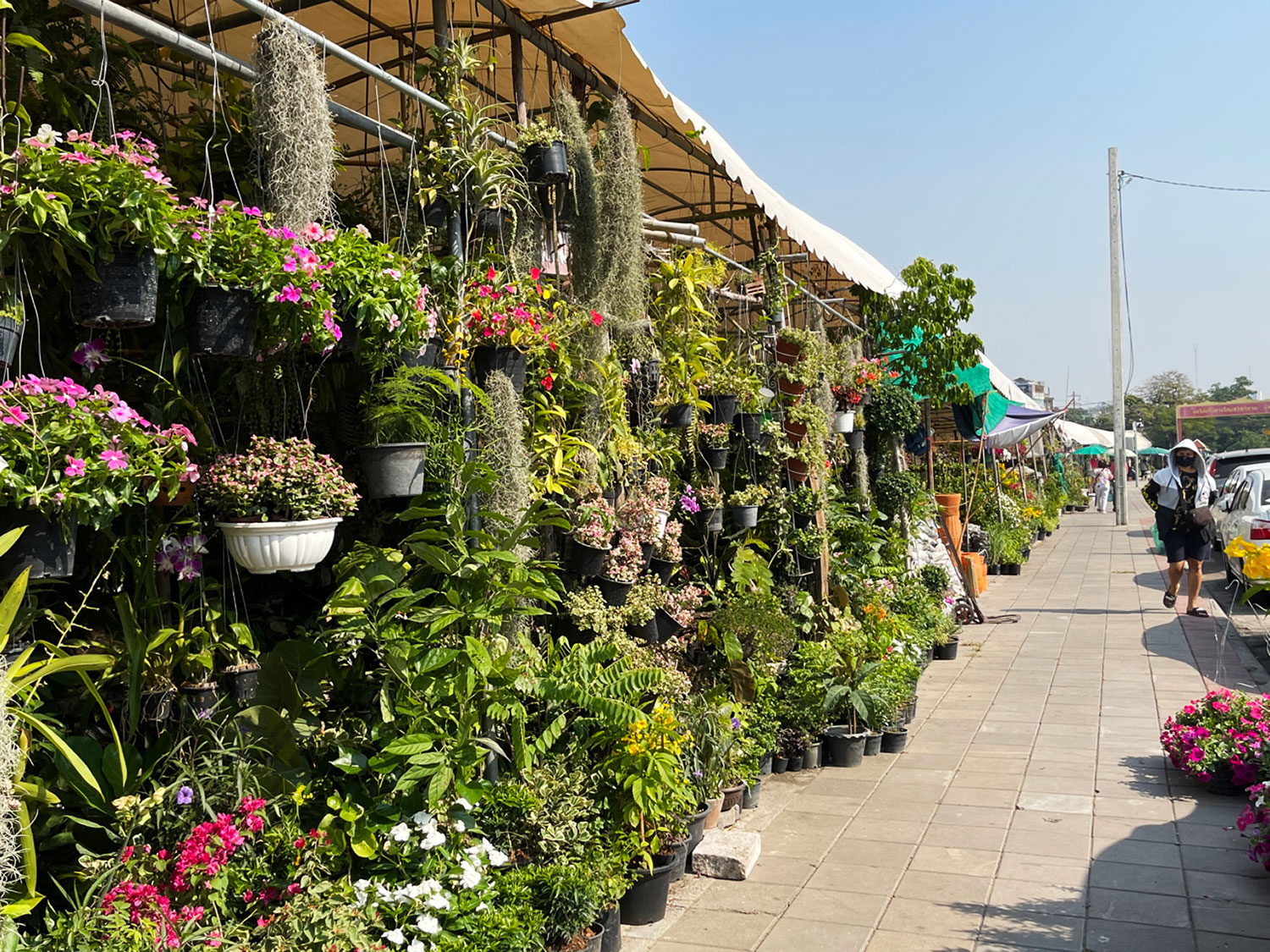 The Thewet plant market is located next to Talat Devaraj pier. The market is not big but it is old. You can find decorative plants, vegetables and herbs with reasonable prices. The market is open daily from 7am to 7pm.

Sor Roongroj is the name of this 58-year-old Chinese restaurant in Nang Loeng market. Founded in 1963, the restaurant has been known for its stewed duck (duck cooked in phalo herbs or Chinese-style five-spice broth) and other Chinese dishes such as krapho pla neu pu nam daeng (fish maw soup topped with crabmeat), krapho ped phad phrikthai dam (stir-fried duck’s stomach with black pepper) and kha han ob modin (stewed goose feet). The shophouse has welcomed countless well-known people including celebrities, singers and politicians like Prime Minister Prayut Chan-o-cha, Somkid Jatusripitak and Supachai Panitchpakdi. The restaurant has many certificates to guarantee good taste. Among them is the Shell Chuan Chim seal issued by the highly regarded culinary guru MR Thanadsri Svasti in 1974. In 2003, the restaurant was reviewed by Pinto Tao Lek in the Matichon guidebook and also by the Cabinet Cuisine guide by Deputy Prime Minister Wissanu Krea-ngam. The restaurant is open daily from 9am to 8pm. 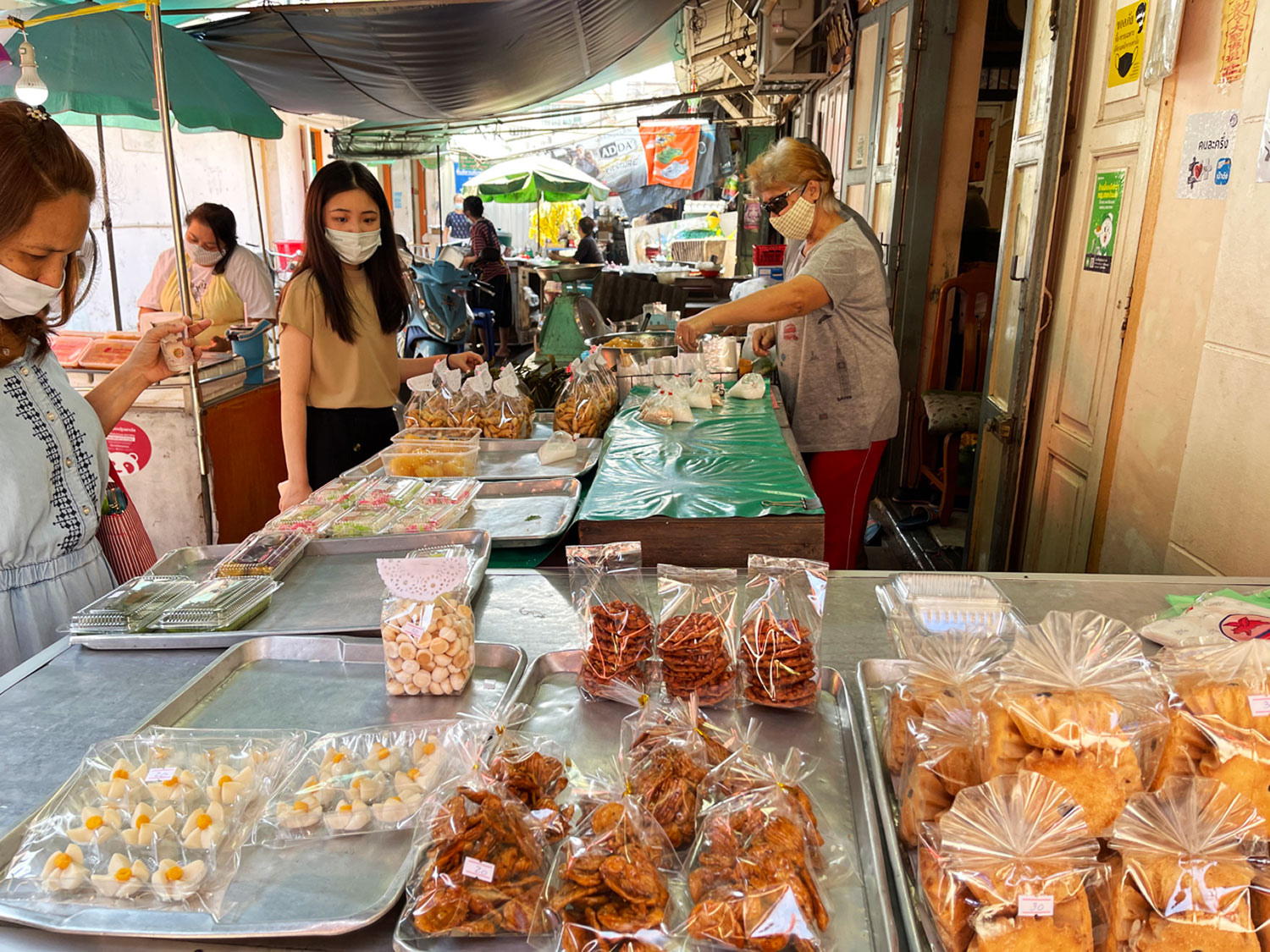 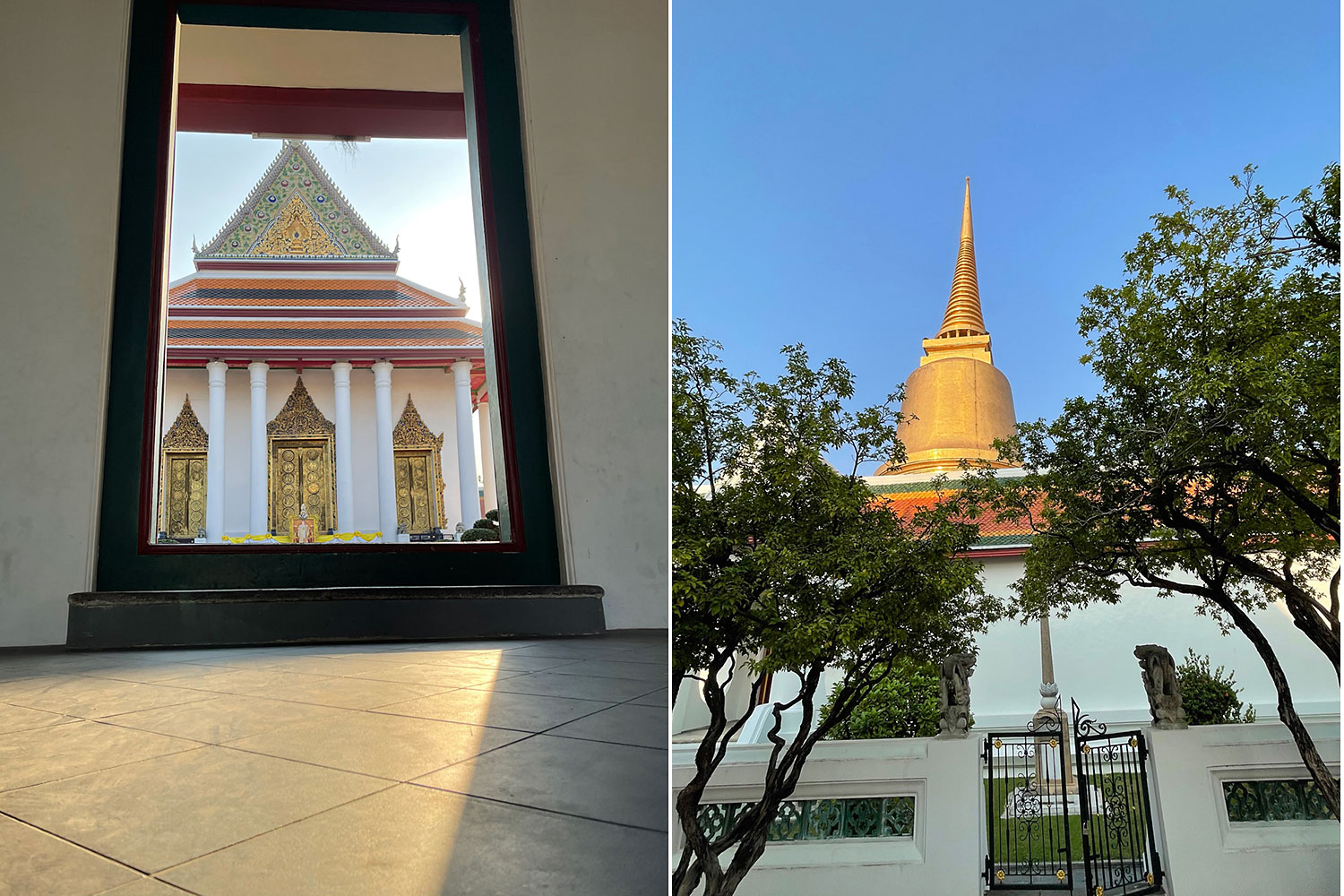 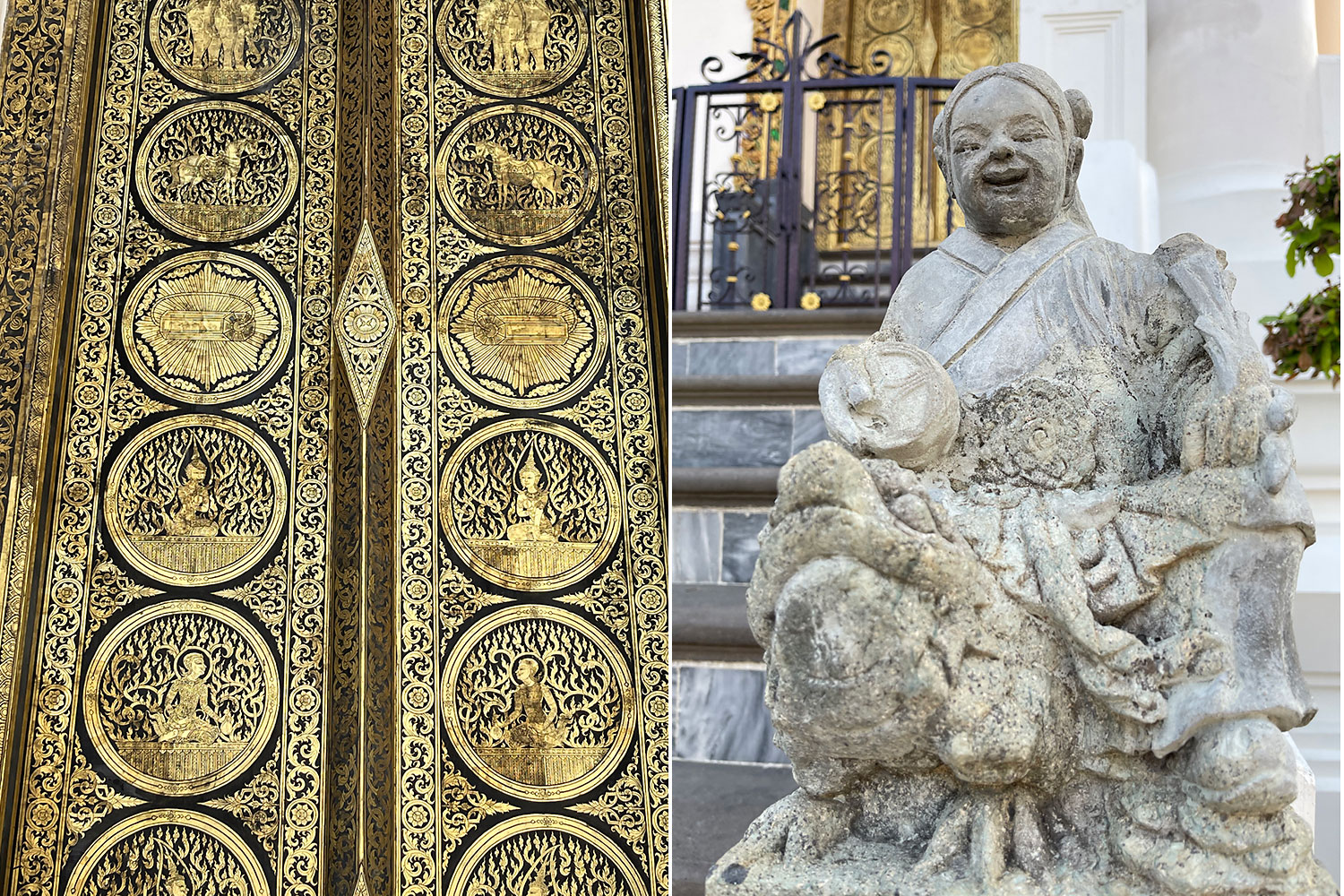 A short walk from Nang Loeng market is Wat Somanas. The temple was commissioned by King Rama IV in 1853 in memory of Queen Somanas Vadhanavadi. The highlight of the temple is the rare mural in its prayer hall. It tells the famous tale of Inao, which was composed in poetic form by King Rama II. Unfortunately, during the Covid-19 pandemic, the hall is closed for public visit. Samples of the murals can be found at the temple’s website (watsomanas.com/painting/mural/index.php). 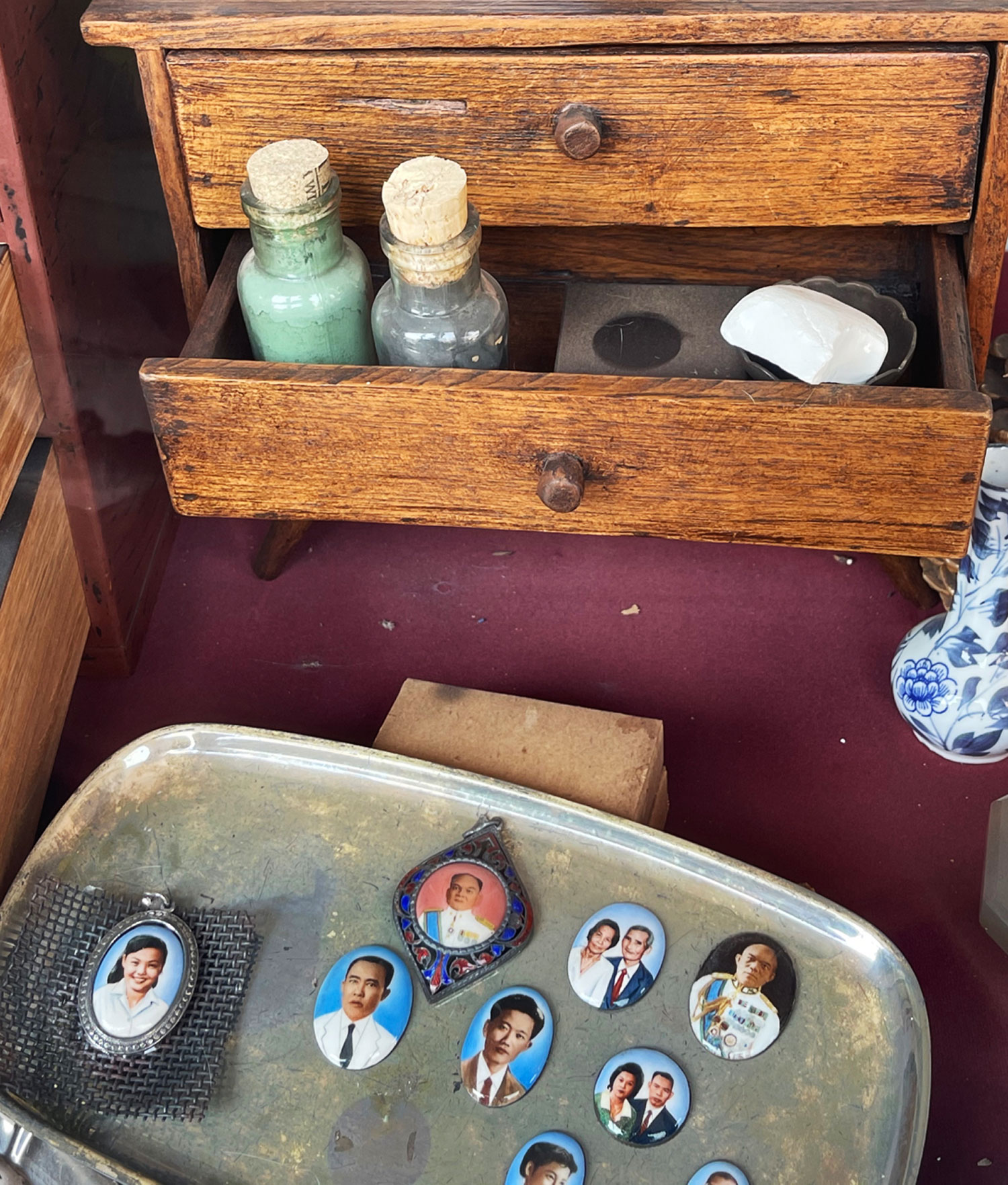 Nang Loeng Art is the name of this old photo studio. It has also provided handmade stone lockets for four generations. The picture lockets were popular in the past thus other shops in the area offered the service, but today only this place has survived. Choices of locket shapes vary from heart, oval, round or pear shapes. Each piece is handmade for a long-lasting memory. The shop is open from Monday to Saturday from 10am to 5pm. 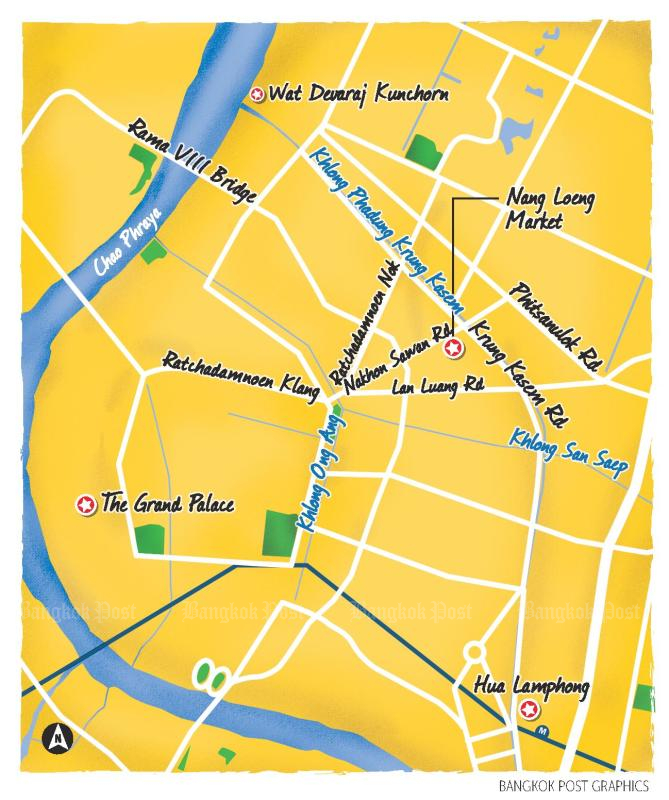