Shining a light on history
Travel

Shining a light on history

Setting against scenery of the starry sky, the Ancient City in Samut Prakan is now illuminated with the first edition of the "Muang Boran Light Fest" to highlight the long history of the Ayutthaya kingdom.

On view until Sunday, the collaboration between Thailand's biggest outdoor museum and Index Creative Village creates a new immersive experience of night walking tours where people of all ages can experience the splendour of Thai art and culture. With its 31-year experience, Index Creative Village was behind the talk-of-the-town grand opening of Iconsiam and the successful Wat Rong Khun Light Fest in 2019.

"The Ancient City is a learning centre for history, arts and culture, popular with foreign tourists, students and local families. Last year, our income was zero due to the border closure and lockdown. Based on preventive measures, we can resume operations in some zones as the number of visitors has drastically decreased. We're struggling to survive, so we joined hands with Index Creative Village to turn a crisis into an opportunity," said Paisan Sinram, assistant managing director of the Ancient City Group.

"Several years ago, we used to arrange a night museum programme and feedback was really good. That inspired us to bring it back once again, but this is the first time that our museum is lit up at night."

To enhance visual experiences, some 25 million baht has been poured into the extravagant multimedia show using real-time tracking and projection mapping technology and high-luminance projectors, which will be used in the upcoming opening ceremony of the Tokyo Olympic and Paralympic Games, to take visitors back to the heyday of the old capital of Siam.

"We were ranked the seventh-best event organiser in the world by America's Special Events Magazine. Over the past years, we have created many events, starting from the Hoi An Light Festival in 2017, then the Wat Rong Khun Light Fest and the Village of Illumination Festival in 2019. But this time, we organised the 'Muang Boran Light Fest' to promote Thailand's tourism and show our power in dealing with the crisis," said Kreingkrai Kanjanapokin, founder and group chief executive officer of Index Creative Village.

"Praphai Viriyahphant built Muang Boran with his passion for Thai culture. So, this festival highlights Thailand's rich history as visitors can roam around and spend time taking photos with several historical tourist attractions in a different atmosphere." 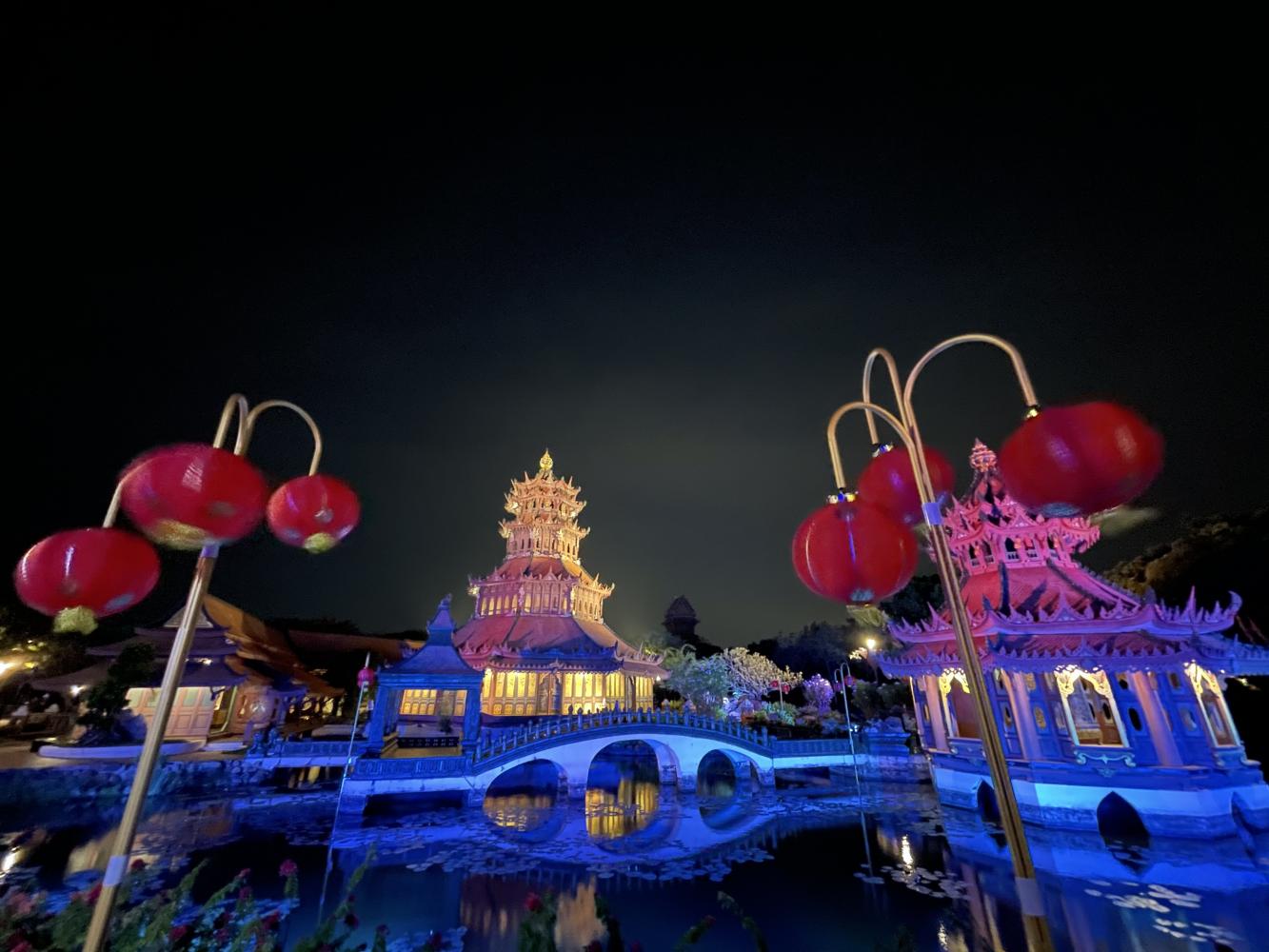 Spread over 40 rai, the Central Region zone boasts nine attractions with an innovative light and sound show. When the sky gets dark, the striking video mapping is projected on the white walls of Sanphet Prasat Throne Hall to transport visitors back to the old days when the Ayutthaya kingdom was a major trading hub for sea merchants from Portugal, France, Holland, China, Persia and Japan.

Based on historical accounts written by Thai and foreign archaeologists, the throne hall is an imitation of the original one, which was erected during the reign of King Phra Baromtrai Lokanat and burnt down in the second fall of Ayutthaya. It served as a ceremonial site for coronations and an audience hall for foreign ambassadors and envoys during the reign of King Narai the Great. In 1972, King Bhumibol Adulyadej turned it into a reception hall to welcome Queen Elizabeth II and Prince Philip.

Just a stone's throw from the palace, the monument of the Great Battle of Yuthahathi has been turned into an open-air theatre. A pair of towering elephant statues double as a large illumination, while advanced mapping technology is employed to recount the legendary royal fight on the elephant back between King Naresuan and Burmese Crown Prince Maha Uparaja at Nong Sarai, Suphan Buri. This brought significant change and independence to Siam.

Opposite, Khun Phaen House has been a popular photogenic backdrop for fans of the hit TV series Wanthong, the latest reinterpretation of the Thai novel Khun Chang Khun Phaen. Here, visitors can dress in elegant period costume and enjoy posing for pictures amid nostalgic vibes. This compound features four traditional Thai wooden houses, where it is believed Khun Phaen was imprisoned for years during the Ayutthaya period. 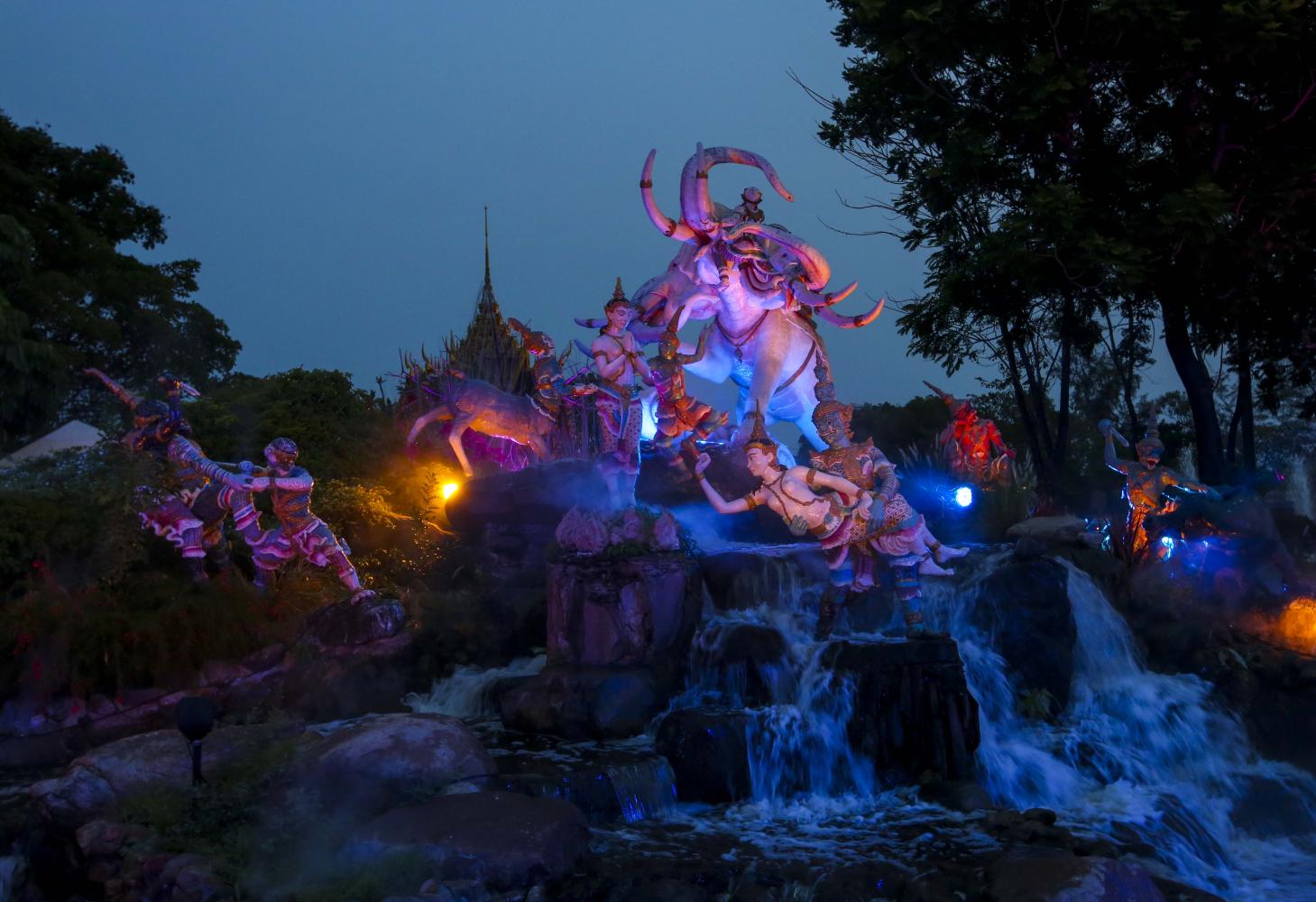 A colourful light show brings the ruined Kham Yaad Palace Hall to life. It was once the residence of King Uthumphon, who renounced the throne and entered the monkhood. In 1760, he was asked to leave the monastery and fight against the Burmese troops to protect Ayutthaya. After the war, he returned to his monastery before Burmese invaders came back and destroyed the old capital in 1767.

Sitting in the middle of a huge pond, the octagonal-shaped Phra Kaew Pavilion is trimmed with Chinese lanterns to celebrate first-class craftsmanship. It is a perfect mixture of Thai and Chinese designs and houses a beautifully carved scripture cabinet from the Ayutthaya period.

Standing on a hilltop, the Mondop of the Footprint of the Lord Buddha shines the light of wisdom and is also the best vantage point to view panoramic perspectives of the Ancient City. This Ayutthaya-style building is designed to look like the original in Saraburi which enshrines a Buddha footprint from India.

Nearby an astonishing five-minute light and sound show lights up the Ramayana Garden to capture 10 significant scenes from the Ramakien epic. At the same time, Dusit Maha Prasat Palace draws attention with a colourful multimedia show that reflects the grandeur of the Rattanakosin period.

After the night tour, visitors can take a break at The Market and boost their energy with a wide selection of famous delicacies and a special summer menu. 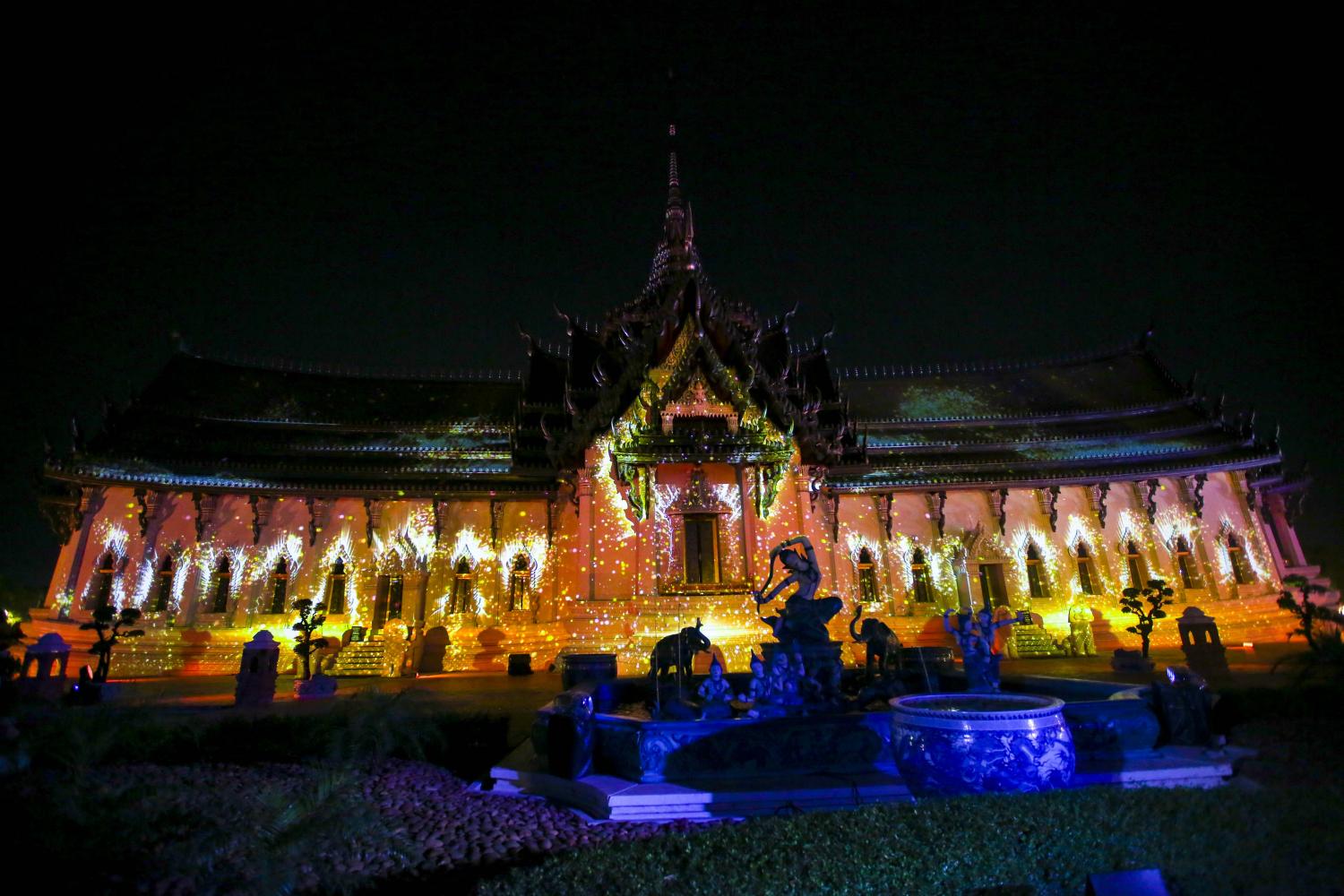 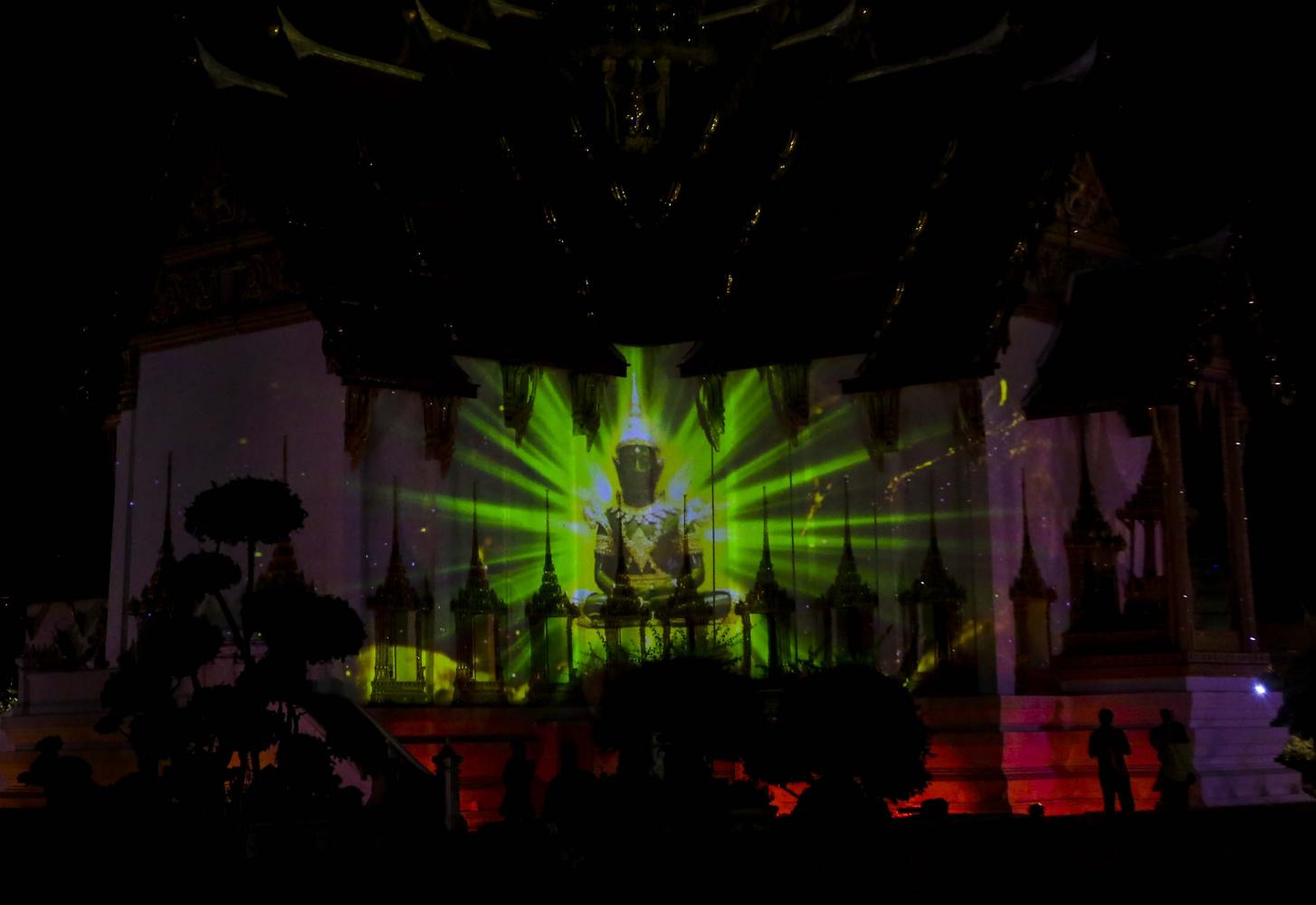 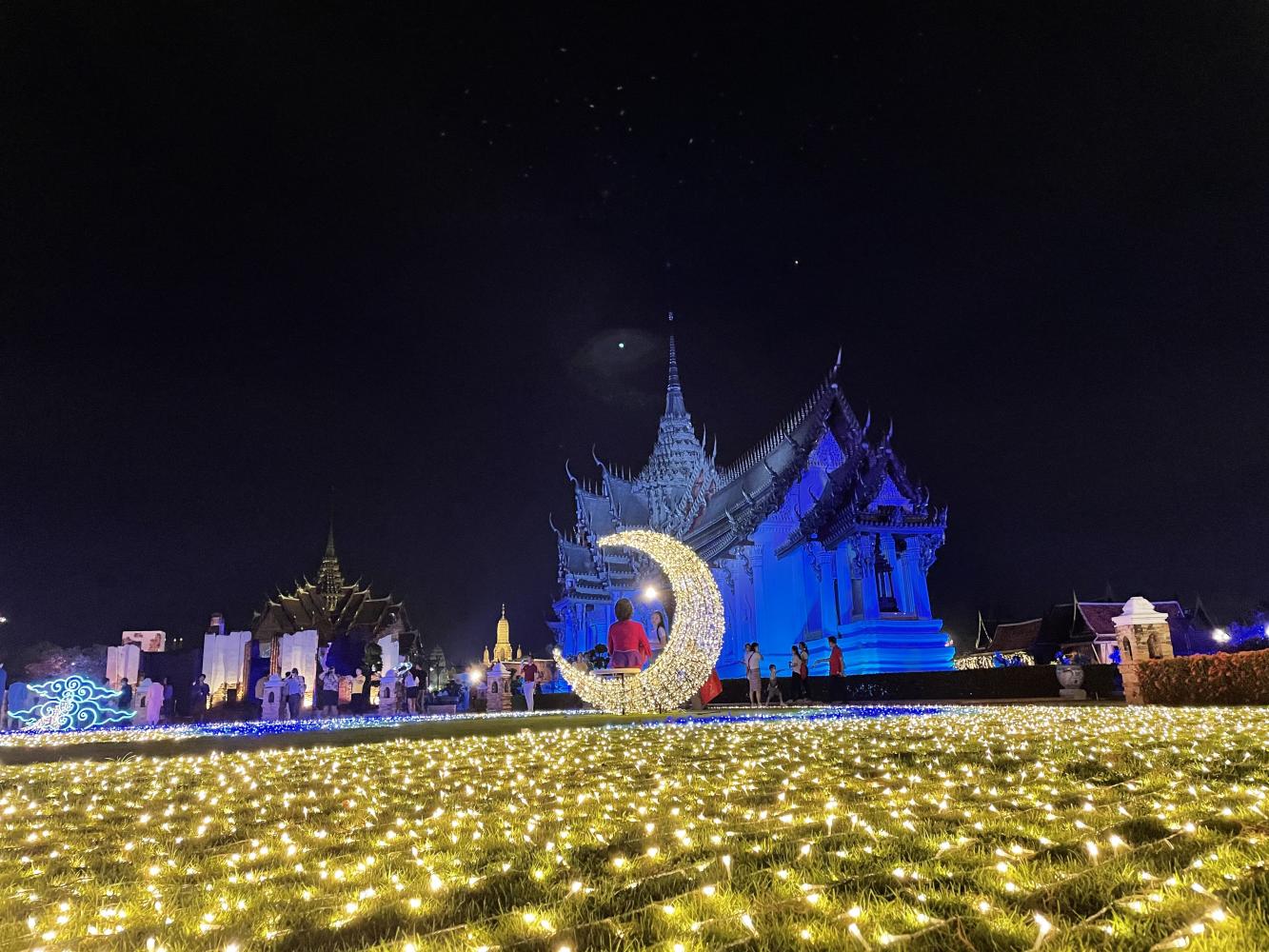 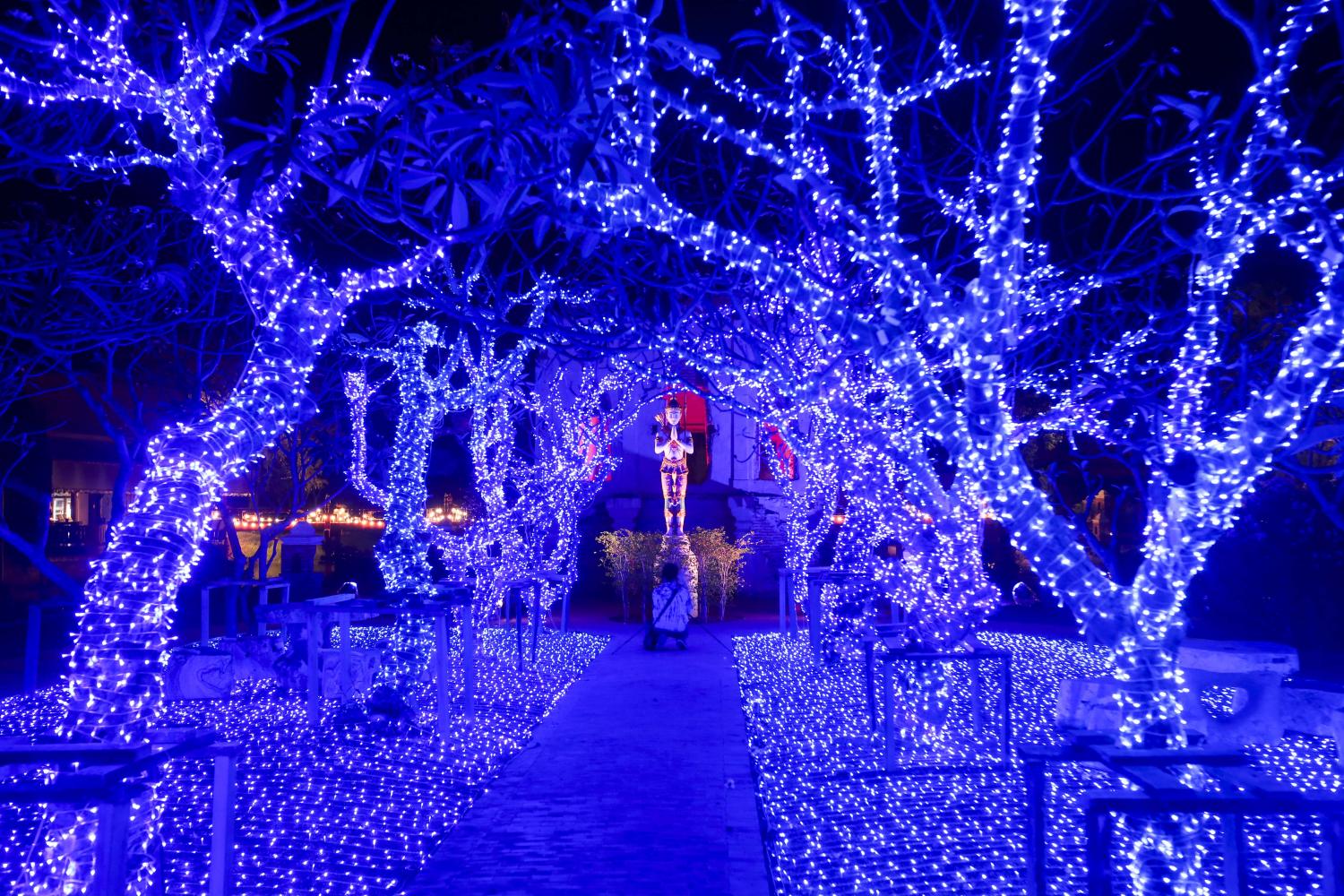 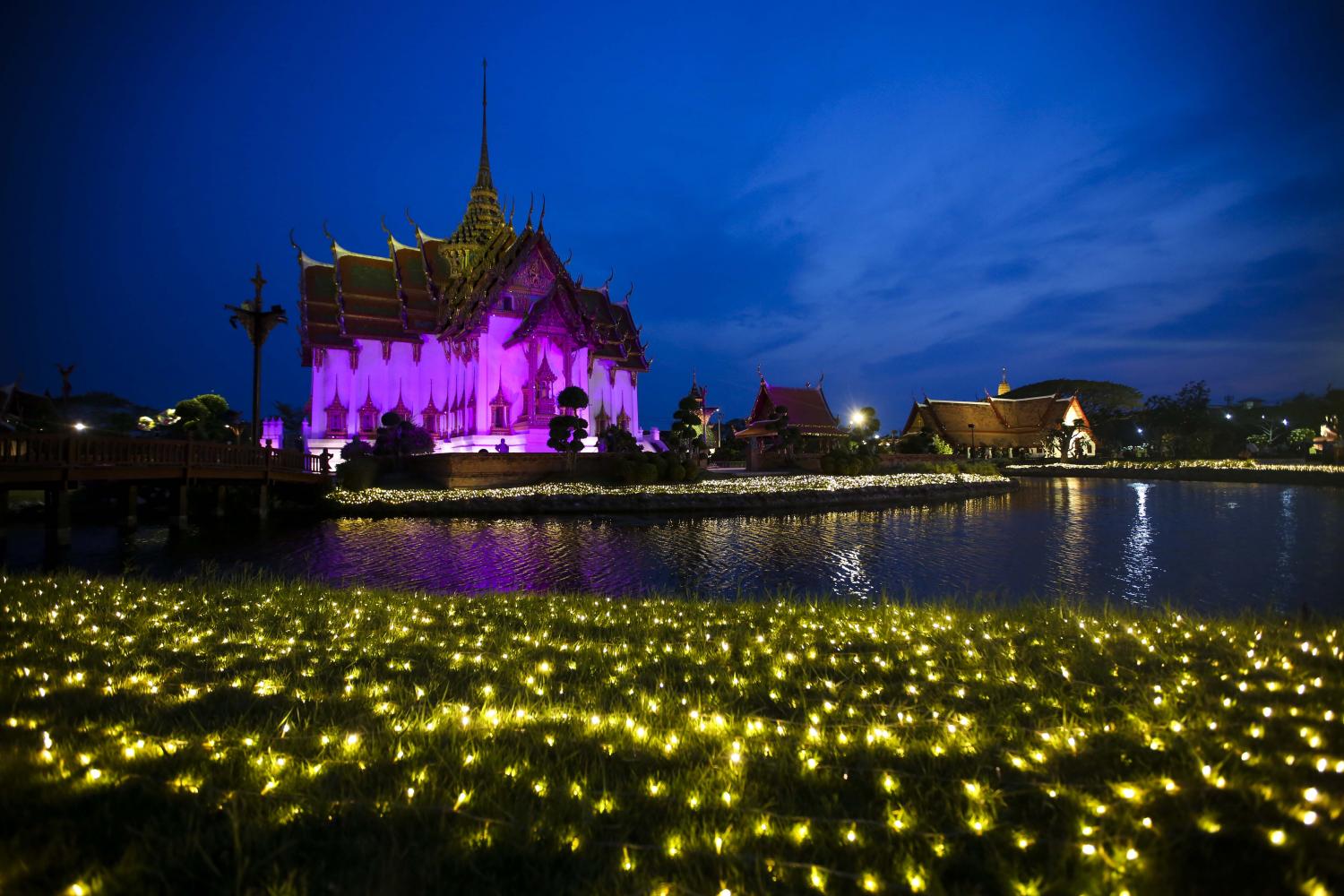