Explore the unique charms of Phetchaburi

Located in a historic temple, Suwannaram Art Gallery is an open space where visitors can learn about local traditions

As the winter breeze blew in, it was the ideal day for a young man to be ordained. A group of monks were reciting prayers and the temple grounds were busy with local pilgrims when I arrived at Wat Yai Suwannaram in the coastal town of Phetchaburi. Although the place had come back to life, the ordination ceremony was held without a colourful procession or music band, according to disease control measures.

This historic temple has long been a popular tourist attraction to admire traditional Thai architectural arts and craftsmanship dating back to the Ayutthaya period. In 2018, a monk's former abode was transformed into the Suwannaram Art Gallery, with the goal of creating an open learning space where people of all ages can come learn about culture and history from local specialists in various fields.

The project is the brainchild of the Look Wa Group, a troop of locals belonging to the new generation, who have dedicated themselves to learning and preserving gilded black lacquer painting, leather shadow puppet carving, stucco art, paper art as well as lakorn chatri (Thai traditional performing art).

According to their studies, Phetchaburi-style art takes inspiration from nature in illustrating the three Buddhist worlds -- earth, heaven and hell. You can find a diverse range of species as well as native plants that coexist in the Himmapan forest to highlight the way of life and local wisdom.

In 2006, Kru Chumlong Buasuwan founded the Look Wa Group while working at Benchamatheputhit Phetchaburi School. He teamed up with local artisans to develop a creative learning programme for his students outside the classroom and expanded membership to include young folks from neighbouring communities. 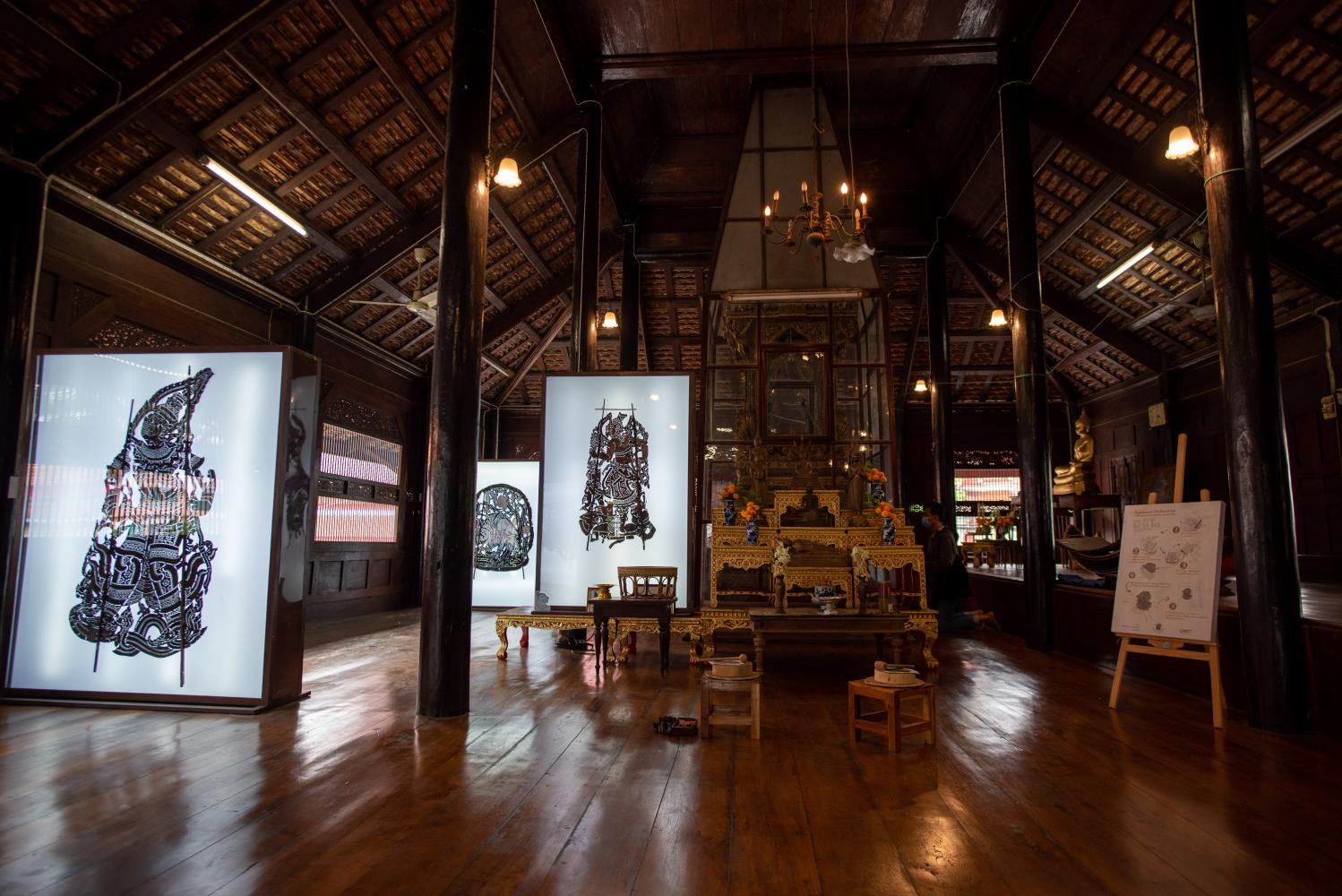 The Museum of Shadow Puppet has a display of 40 leather shadow puppets from the private collection of Luang Por Rit. (Photo: Chatchawan Jaksuwong) "I began by teaching students how to make perforated flags or puang mahod (Thai decorative paper pendant) and stucco art so that they could understand local wisdom and Thai culture. Then, I organised a mobile art workshop at Khao Wang's (Phra Nakhon Khiri Historical Park) cable car station where my students shared knowledge with tourists and local villagers. This encouraged them to fully comprehend everything because they had to educate and respond to others," Kru Chumlong said.

"The feedback was positive and tourists donated funds to support us. Young and old residents are working together to promote Phetchaburi's beautiful culture and unique arts. Before Wat Yai Suwannaram's abbot permitted us to turn a monk's old dwelling into an art gallery three years ago, we collaborated with the Thai Health Promotion Foundation to create an open learning space in communities. We want to demonstrate that any place can be a learning area for everyone."

Climbing up to an old Thai wooden house, a living space serves as a stage on which veteran artist Pitawan Prasansarakit will conduct a 2.5-hour class on weekends for those interested in Southern performing arts such as tari kipas, srivichai folk dance and Javanese dance, all of which are prerequisites for performing lakorn chatri. 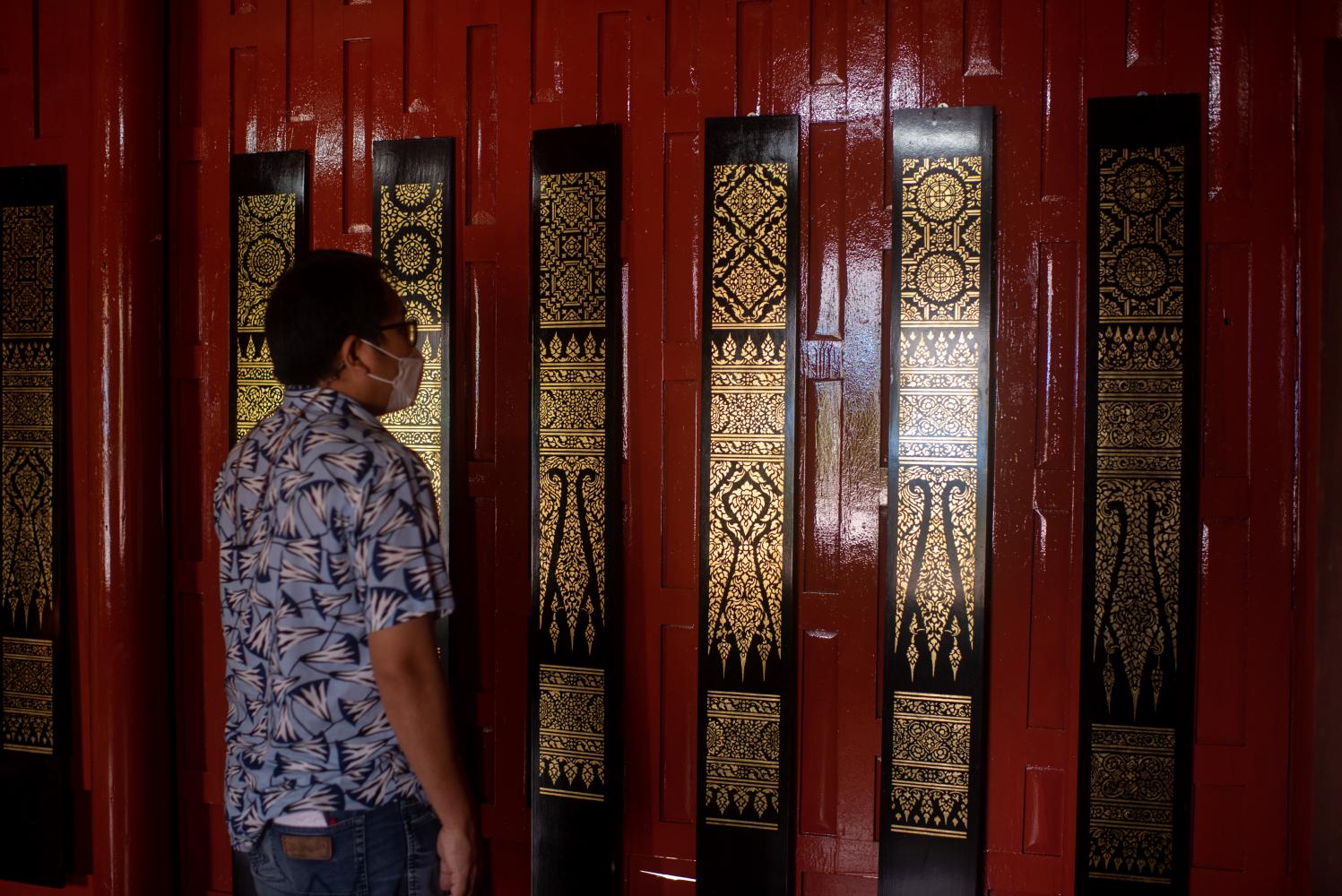 The Suwannaram Art Gallery is promoting itself as a model of open learning in Phetchaburi. (Photo: Chatchawan Jaksuwong) 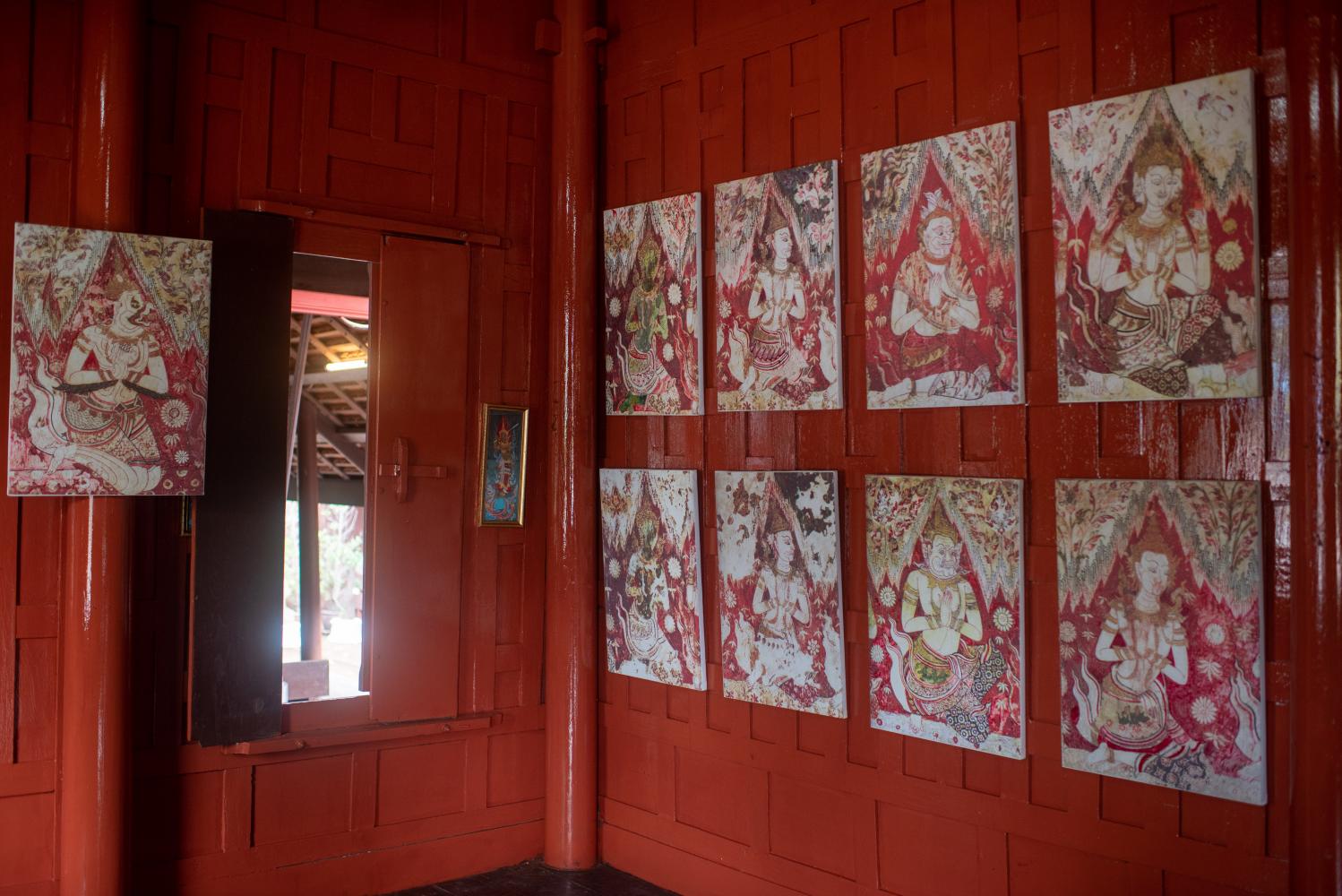 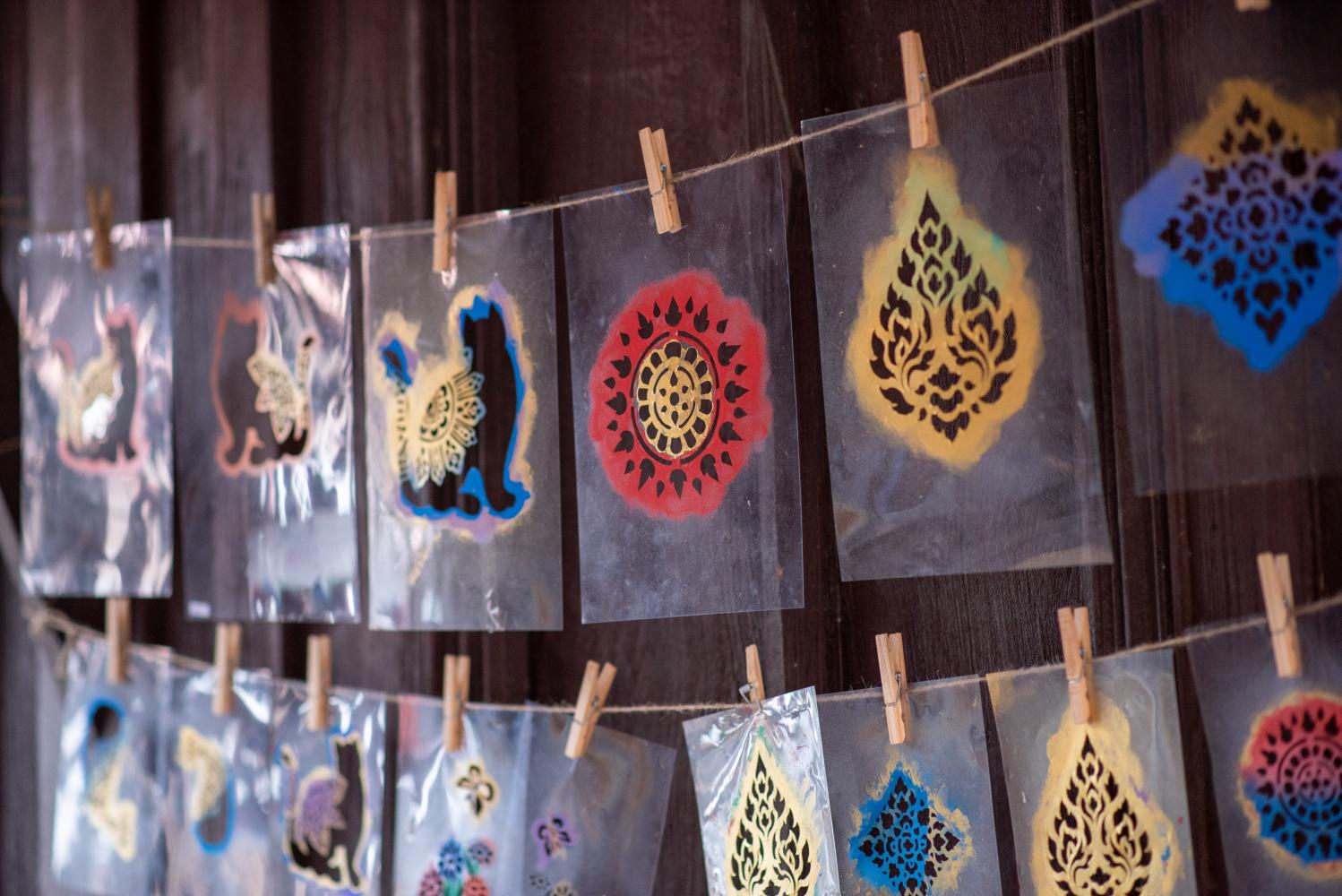 "Since the reign of King Rama V, Phetchaburi has been famous for lakorn chatri, which was inspired by Thai southern-style manorah dance and has been passed down from generation to generation. I'm a descendant of Phraya Suraphan Phisut and the fifth generation of the Phetch Sumaporn dancing troupe. Our performance schedule was cancelled due to Covid-19, so I spent my weekend arranging free dancing classes here. I'm glad to see that children are still interested in Thai performing arts," Pitawan said.

"Lakorn chatri is not the same as manorah dance. It's a type of Thai dance theatre performance to tell folk tales such as Phra Aphai Mani and Khun Chang Khun Phaen. Like a TV drama series, the show is entertaining and conveys storylines rapidly."

In another corner, young artist Parita Butchiamchai draws visitors with a wide collection of handmade tote bags, home decorative furnishings, lamps and artwork inspired by gilded black lacquer paintings on dhamma cabinets and pillars of the ordination hall and sermon hall. Visitors can participate in a fun session to learn how to make puang mahod, fabric bags, and other crafts. 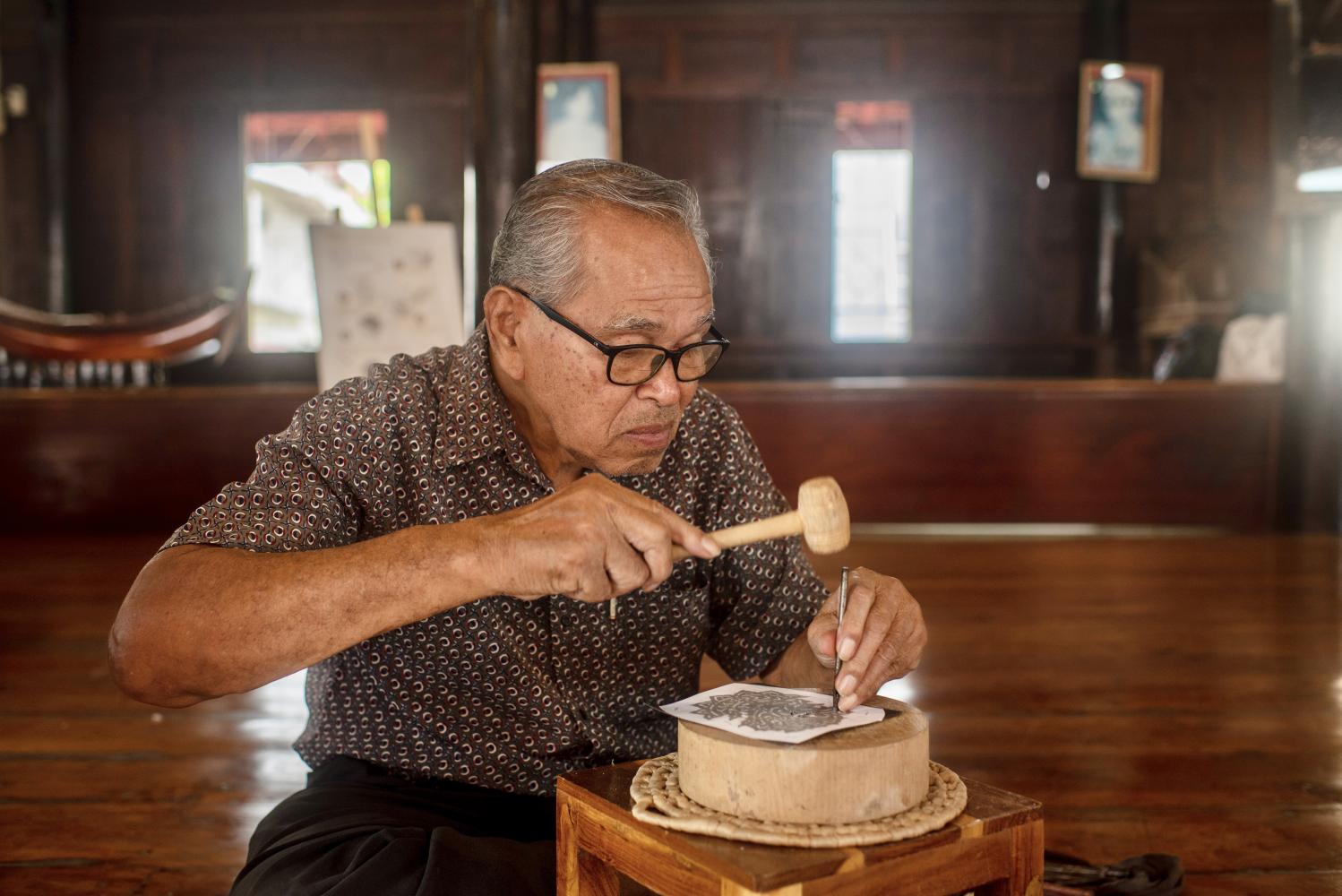 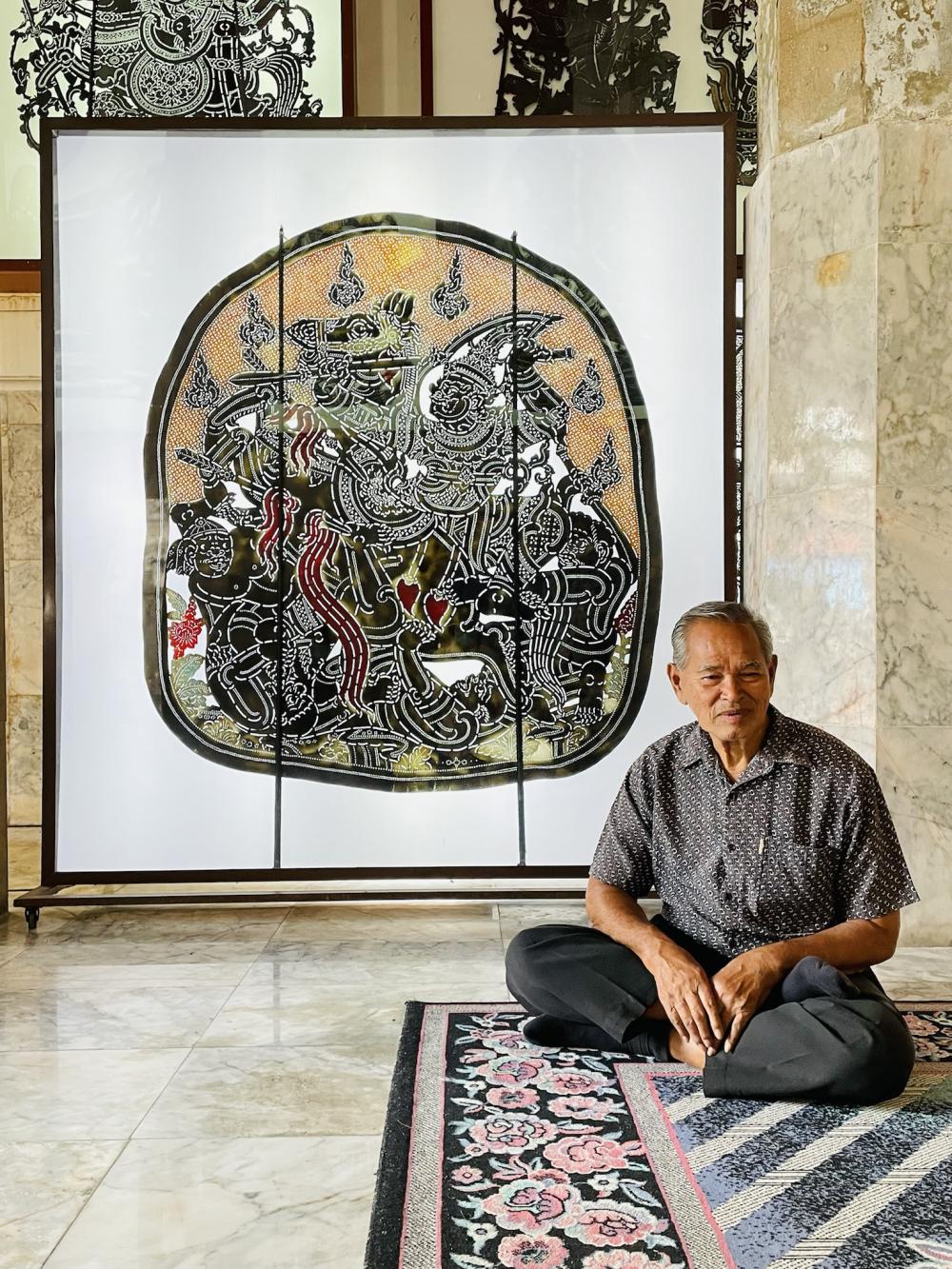 "When I was in grade eight, I joined the Look Wa Group and discovered a love for the arts. I spent 10 years studying gilded black lacquer paintings and murals in the ordination hall and sermon hall, all of which feature landscapes, flowers, and animals like cats and birds. I want to maintain Thai art and culture for future generations, so I've converted some of my ideas into a collection of home décor items and fabric bags for everyone to enjoy," Parita said.

"This temple attracts a wide range of visitors. It's a great chance to promote our charming culture. They can learn about the arts while exploring ancient architectural structures. I've used my expertise to conduct some DIY workshops on leather carvings, perforated designs and paintings."

Also on display is a photo exhibition by local photographers portraying Phetchaburi's iconic attractions, landscapes and people's way of life. Leaving the art gallery, visitors can explore the temple, which was constructed in the late Ayutthaya period and underwent a massive restoration during the reign of King Rama V.

Its ubosot is home to 300-year-old murals depicting the Jakata Tales, a troop of devils attempting to conquer the Lord Buddha and the gathering of angels. It also showcases a gold Buddha statue with six fingers and subduing mara pose. 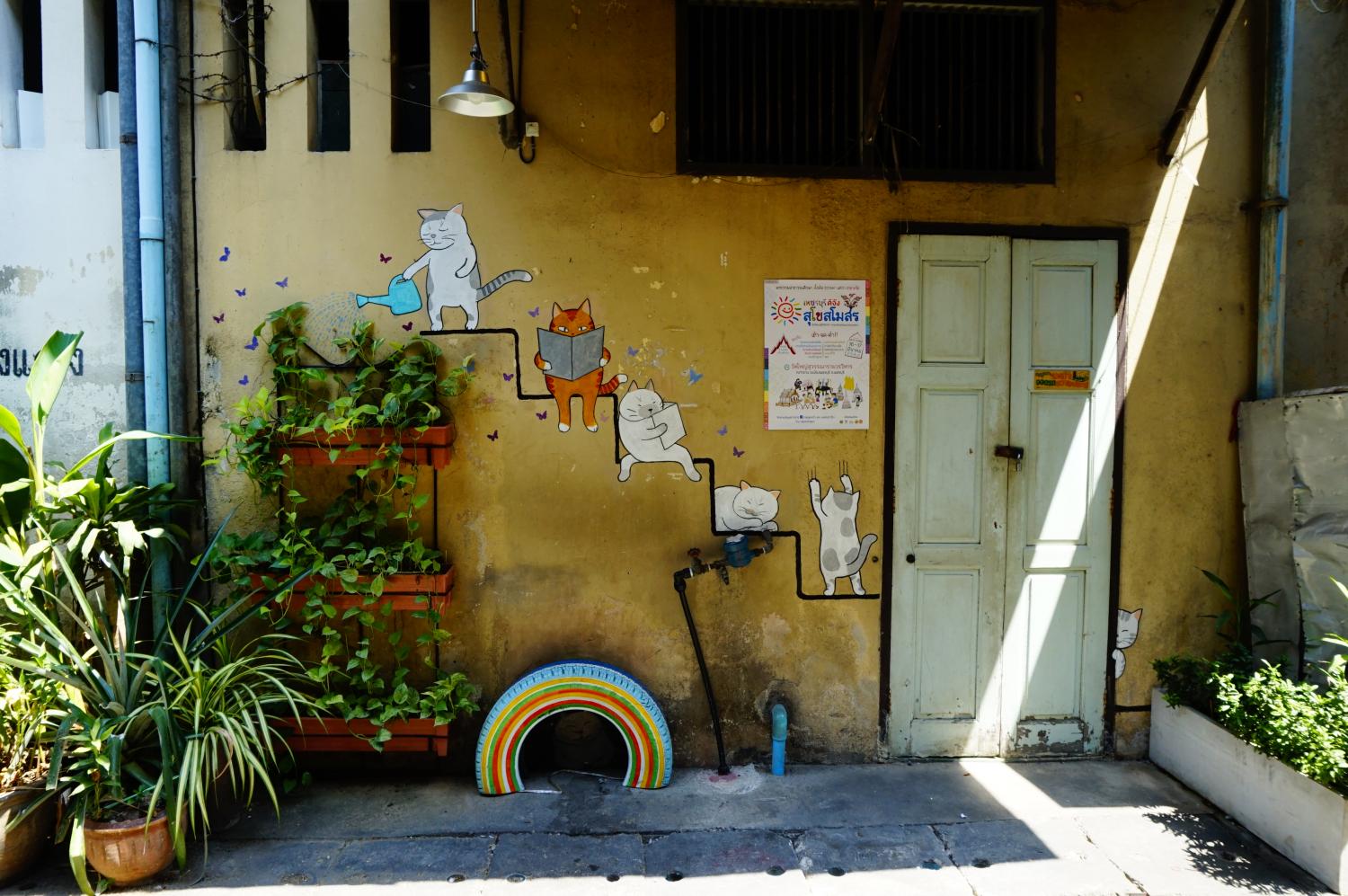 The walls of old shophouses are covered with street art. (Photo: Pattarawadee Saengmanee)

Next door is a crimson teak mansion, which was relocated from the Grand Palace during the Ayutthaya kingdom to Phetchaburi during the temple's restoration by Phra Chao Sua. It's graced with refined wood carvings and gilded black lacquer motifs on the towering pillars, while the walls are covered with striking landscape-inspired murals. It also houses an ancient gold throne that was used in the royal cremation ceremony to enshrine the ashes of the late King Bhumibol Adulyadej.

My tummy was now rumbling with hunger, a warning that it was time for lunch. It's a five-minute drive from Wat Yai Suwannaram to the old market, which has been a major dining and shopping destination for local residents.

I discovered old shophouses with astonishing street art illustrating the lifestyle on the banks of the Phetchaburi River's waterside community while walking through the maze of narrow lanes.

Not far away was Sanan Phayabphruk's house, which has been converted into a little museum, complete with a display of collectable posters and magazines in honour of legendary actor Mitr Chaibancha, who was born in Phetchaburi. 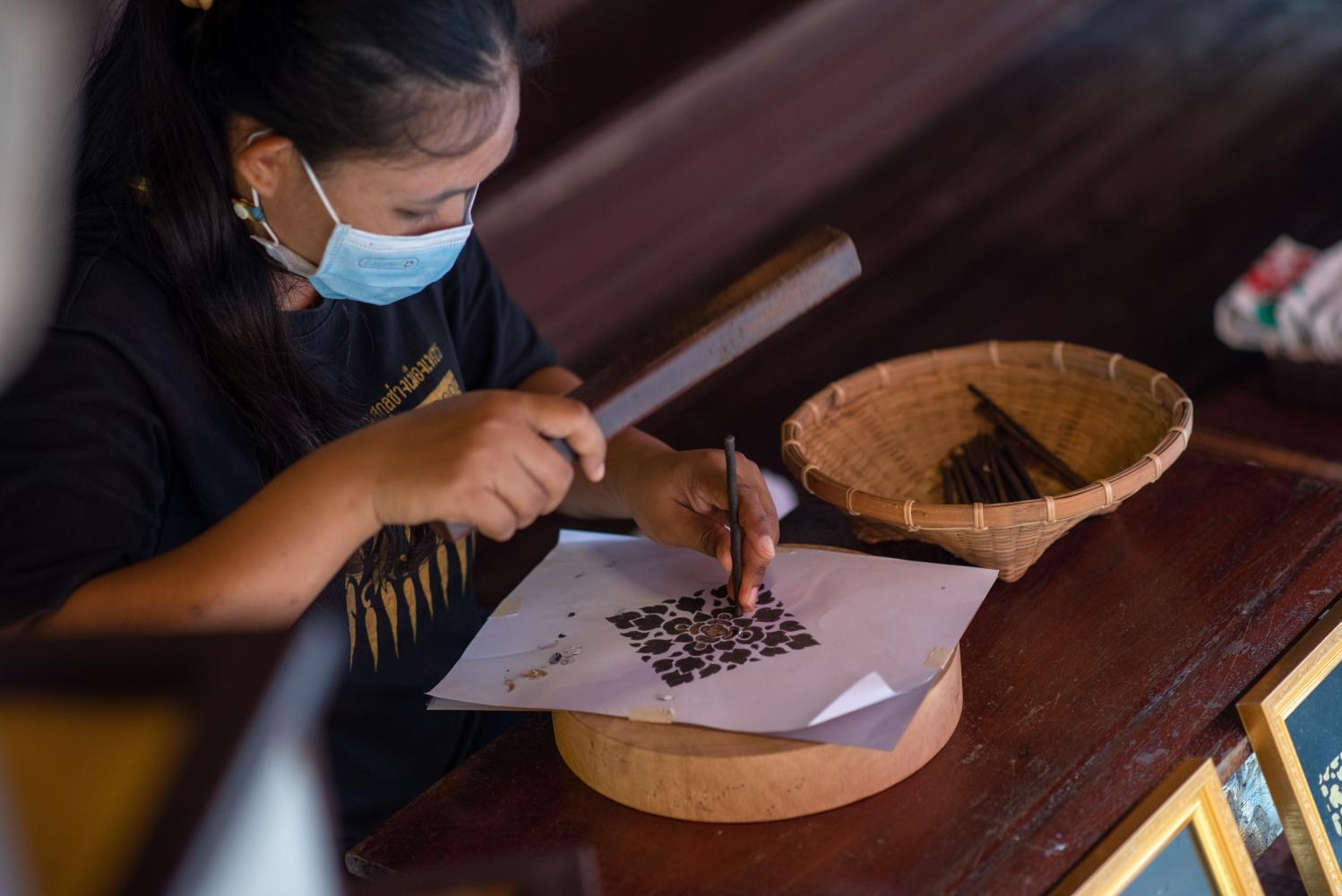 "Since I was 15, I've been collecting Mitr Chaibancha movie handbills. To share my hobby with his fans and other collectors, I turned my residence into a museum. A showing of the last scene from the Golden Eagle, as well as a mini discussion on Mitr Chaibancha, are also available here," said Sanan locally known as Uncle Lek.

My last stop is the Museum of Shadow Puppet, which is located in Wat Plabplachai, just 600m away from the riverside community. On view is a limited edition of 40 leather shadow puppets from the private collection of Luang Por Rit, the temple's former abbot during the reign of King Rama V, who studied all aspects of art with Krua In Khong, the royal painter during the reign of King Rama IV.

He set up a leather carving factory in the temple and engaged a crew of local experienced artists to craft more than 200 leather shadow puppets based on all of Ramakien's epic iconic characters. The shadow puppet is a traditional amusement that integrates many talents such as painting, carving, literature, music and dance, making it a high-class play in the past.

"Wat Plabplachai seemed like the school of arts. Parents sent their children here to learn about stucco art, wood and leather carvings and drawings because there was no entertainment in the past. The skills of drawing and leather carvings are essential in developing our imagination in order to craft shadow puppets," 79-year-old artist Manu Netsuwan shared his experience during a tour. 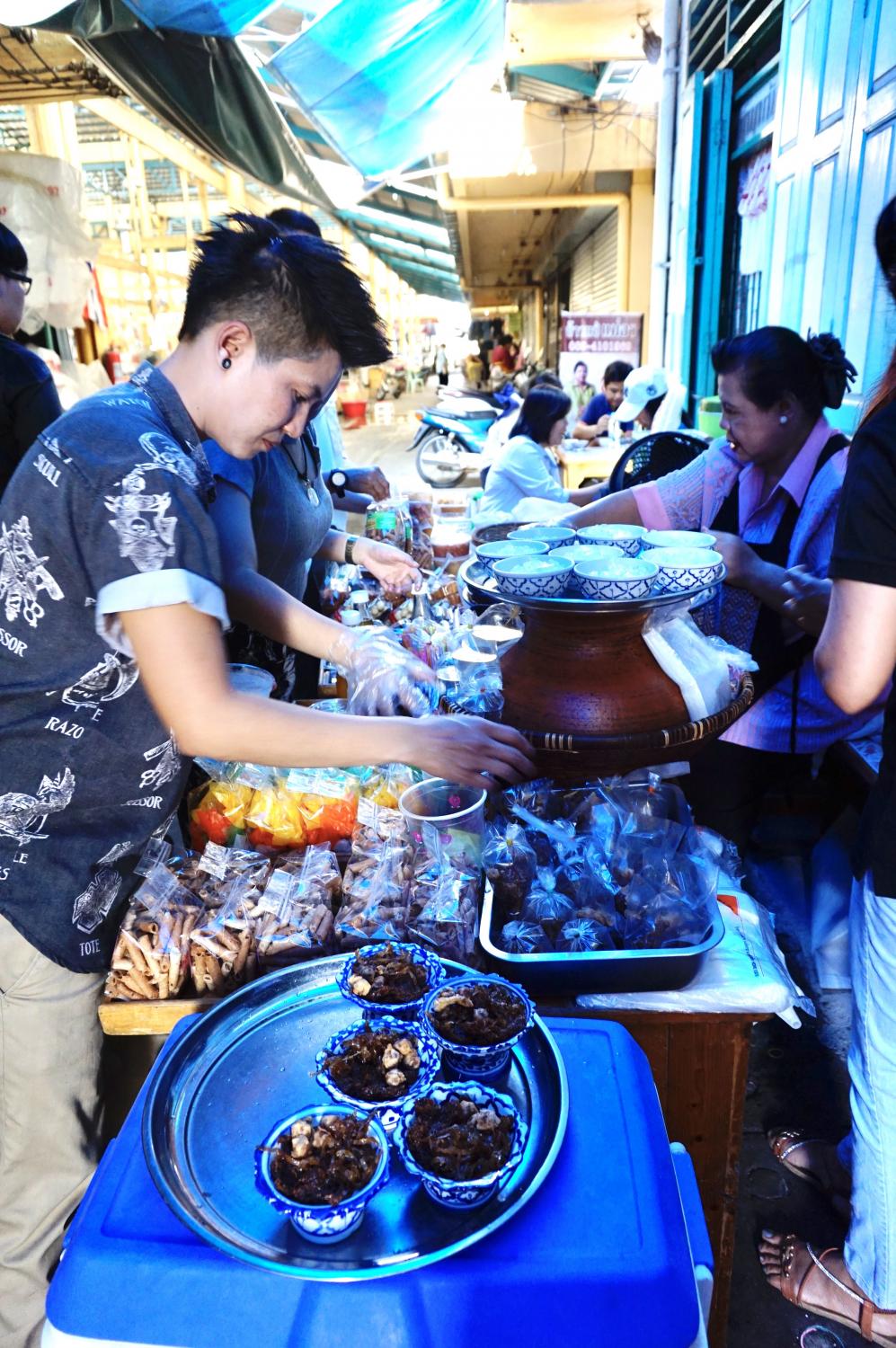 "Making traditional shadow puppets Phetchaburi-style is based on realistic arts to show the human body and gestures. For example, a character flying in the sky must not touch the ground. We take a ringside seat at the performance stage to observe the ways of the performers while sketching our designs."

Cow leather has been the main material while tiger leather was used to create a hermit-inspired puppet. Tossakan and Hanuman puppets are occasionally crafted from cow's leather, which died after being struck by lightning, representing magical strength.

Each puppet is between 1.8m and 2m tall and shows a variety of settings. Natural colours derived from local plants are used for the majority of backgrounds. 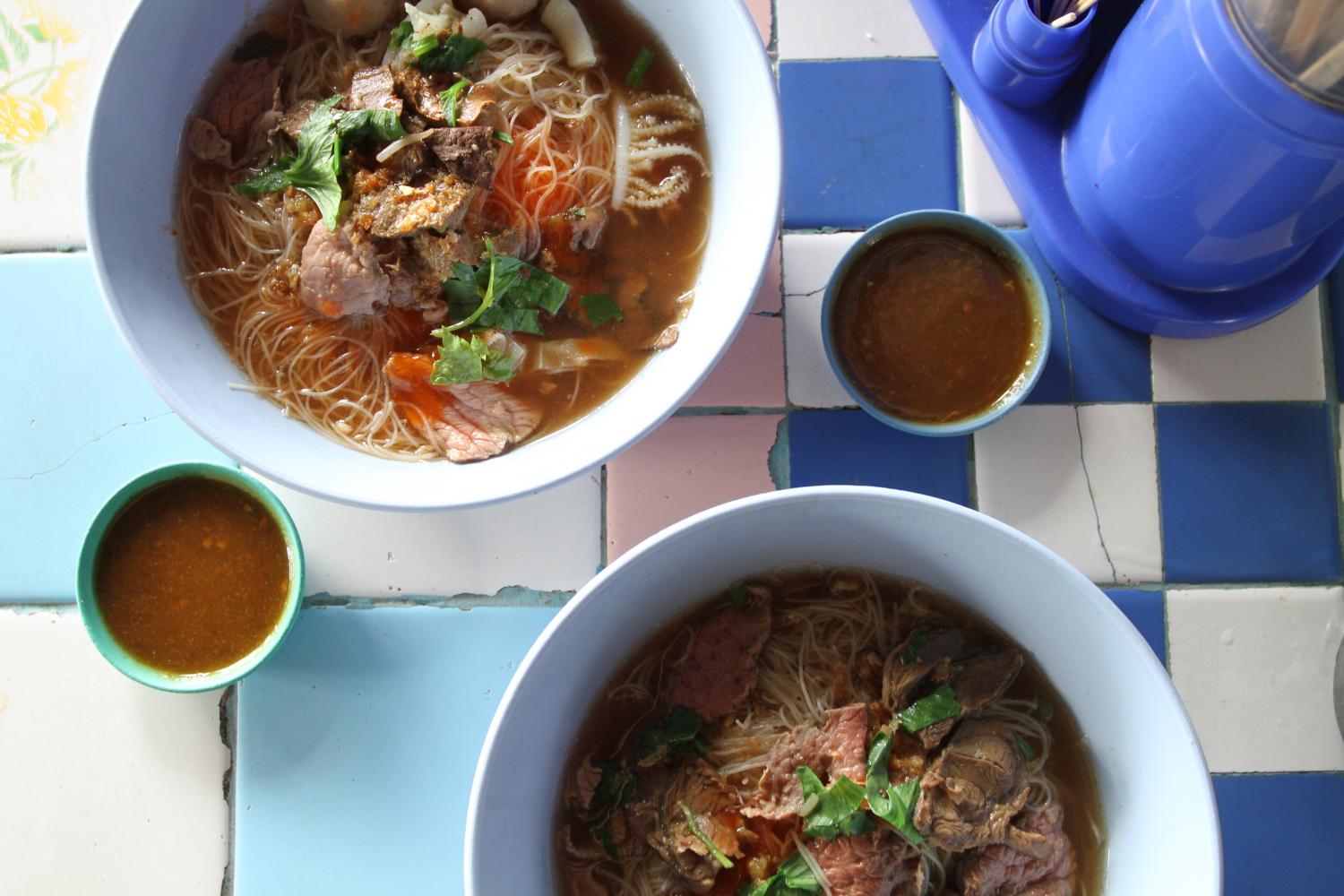 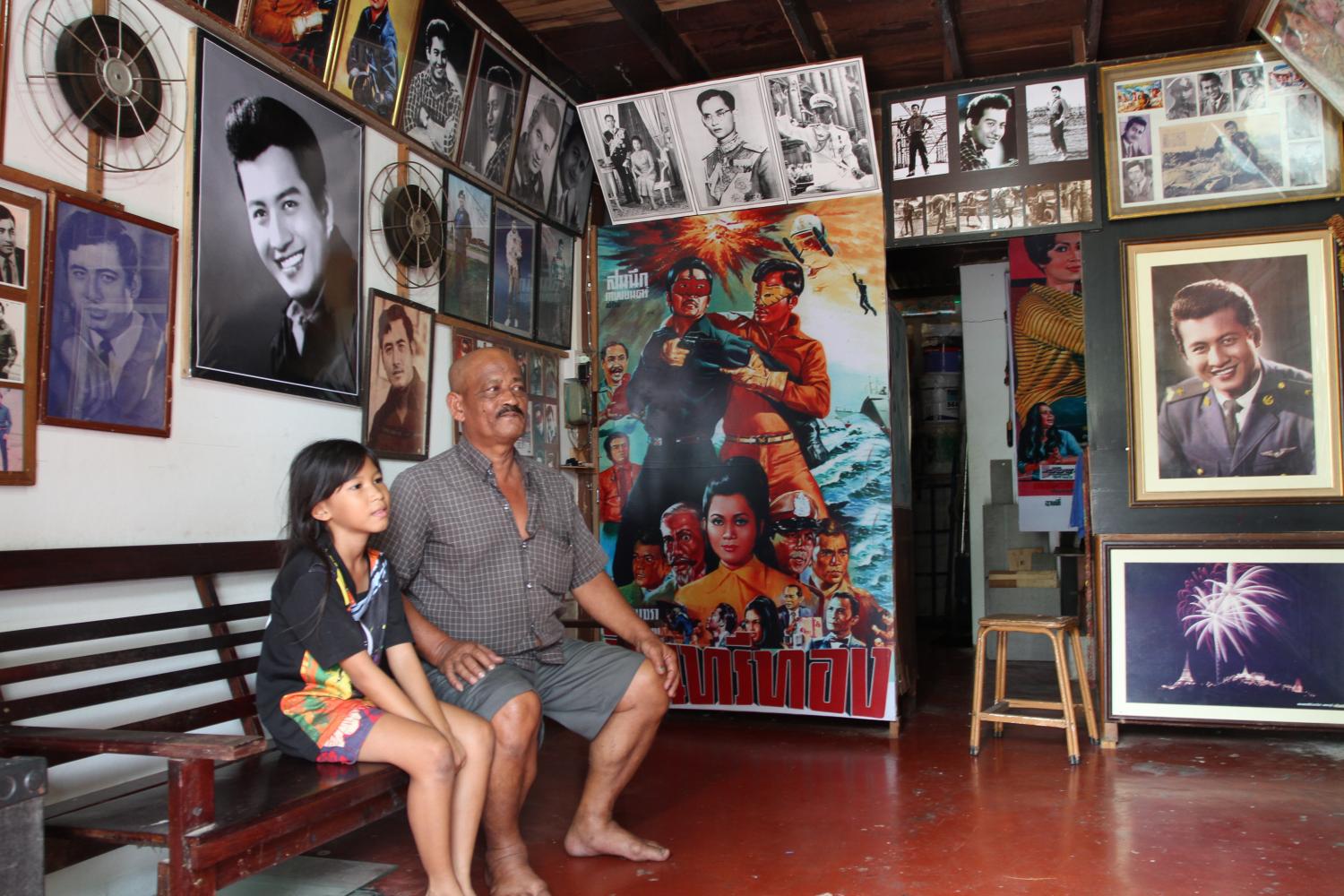 Sanan Phayabphruk has turned his house into a museum to pay tribute to legendary actor Mitr Chaibancha. (Photo: Saranyu Nokkaew) 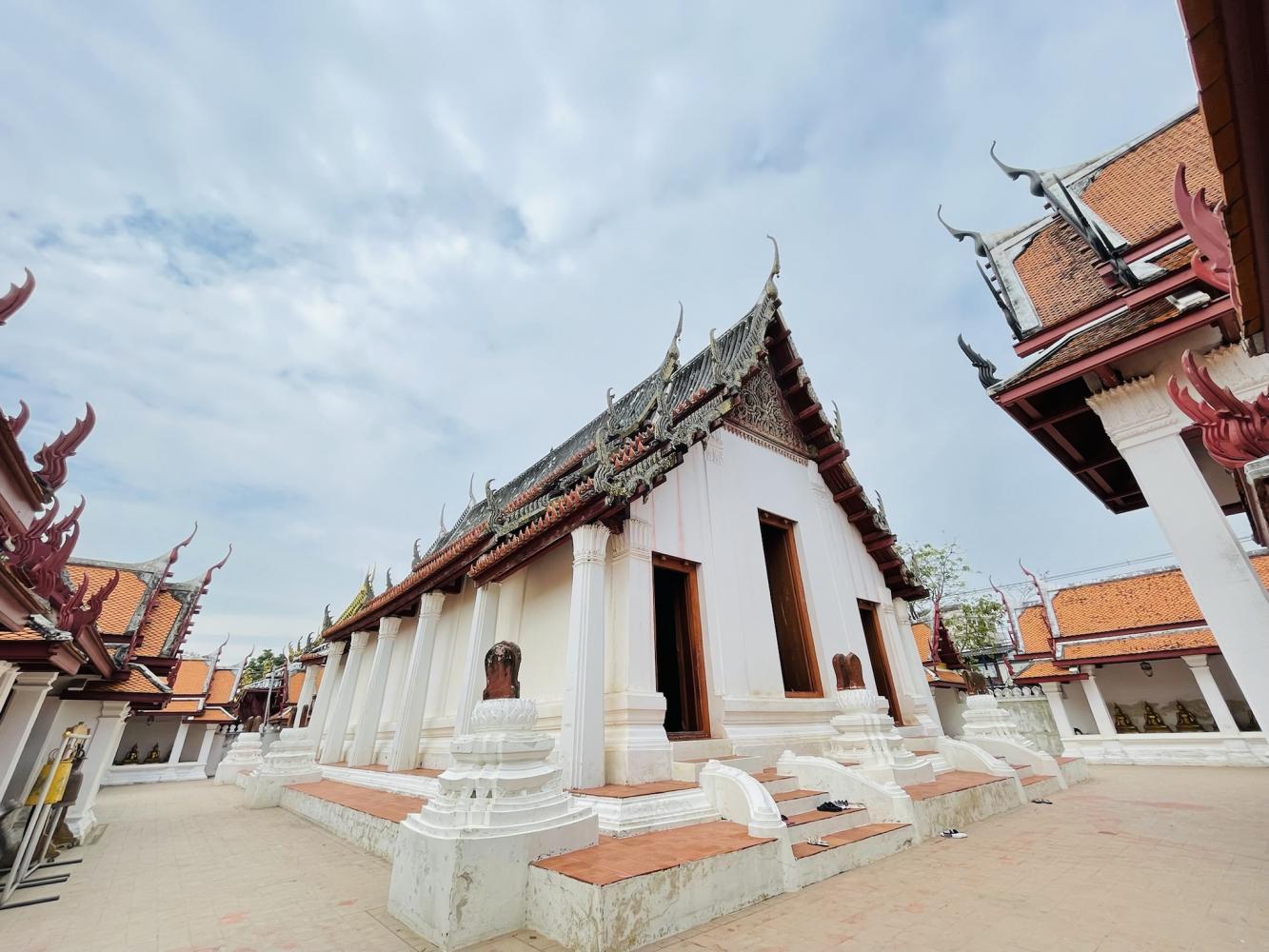 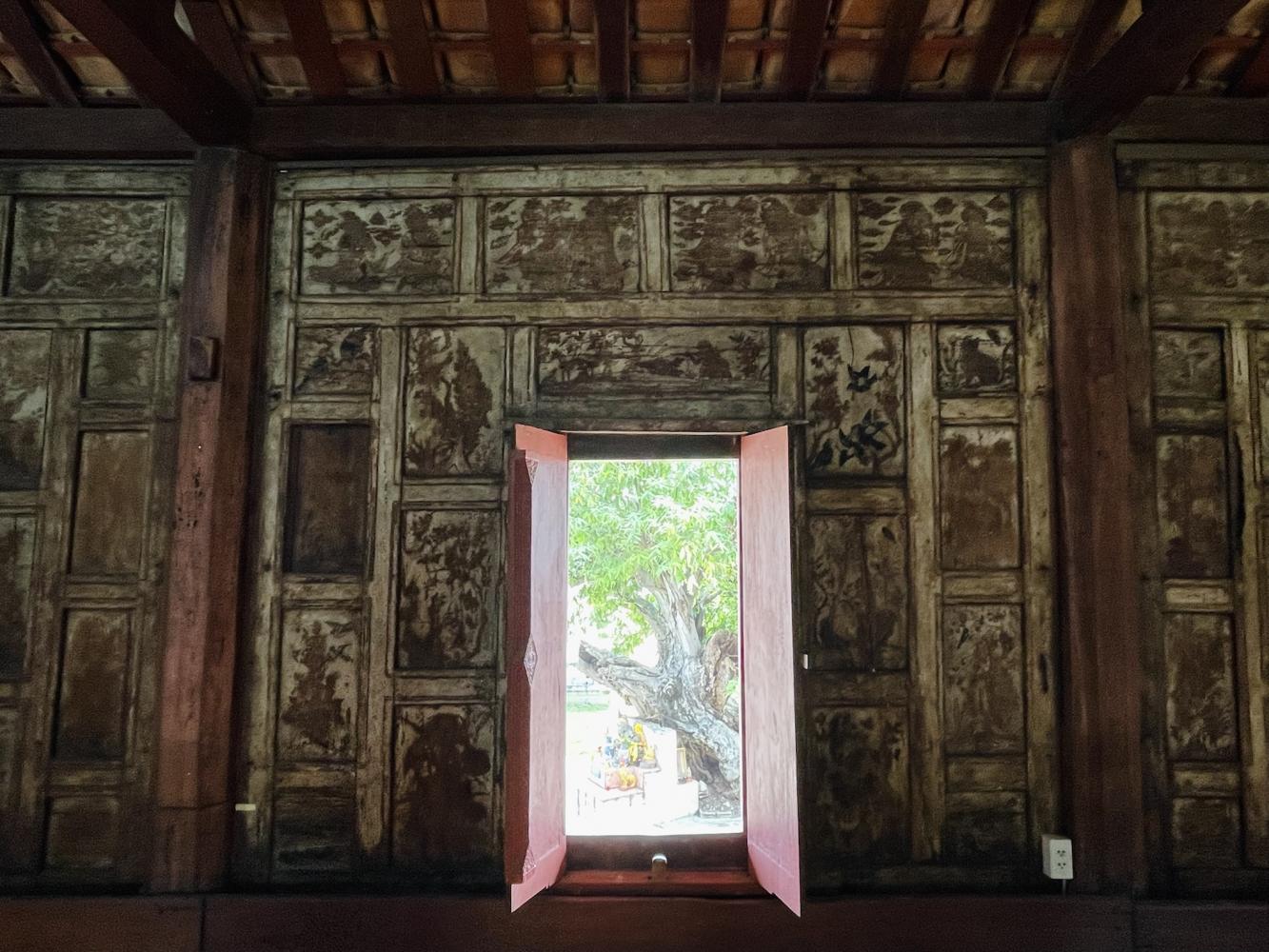 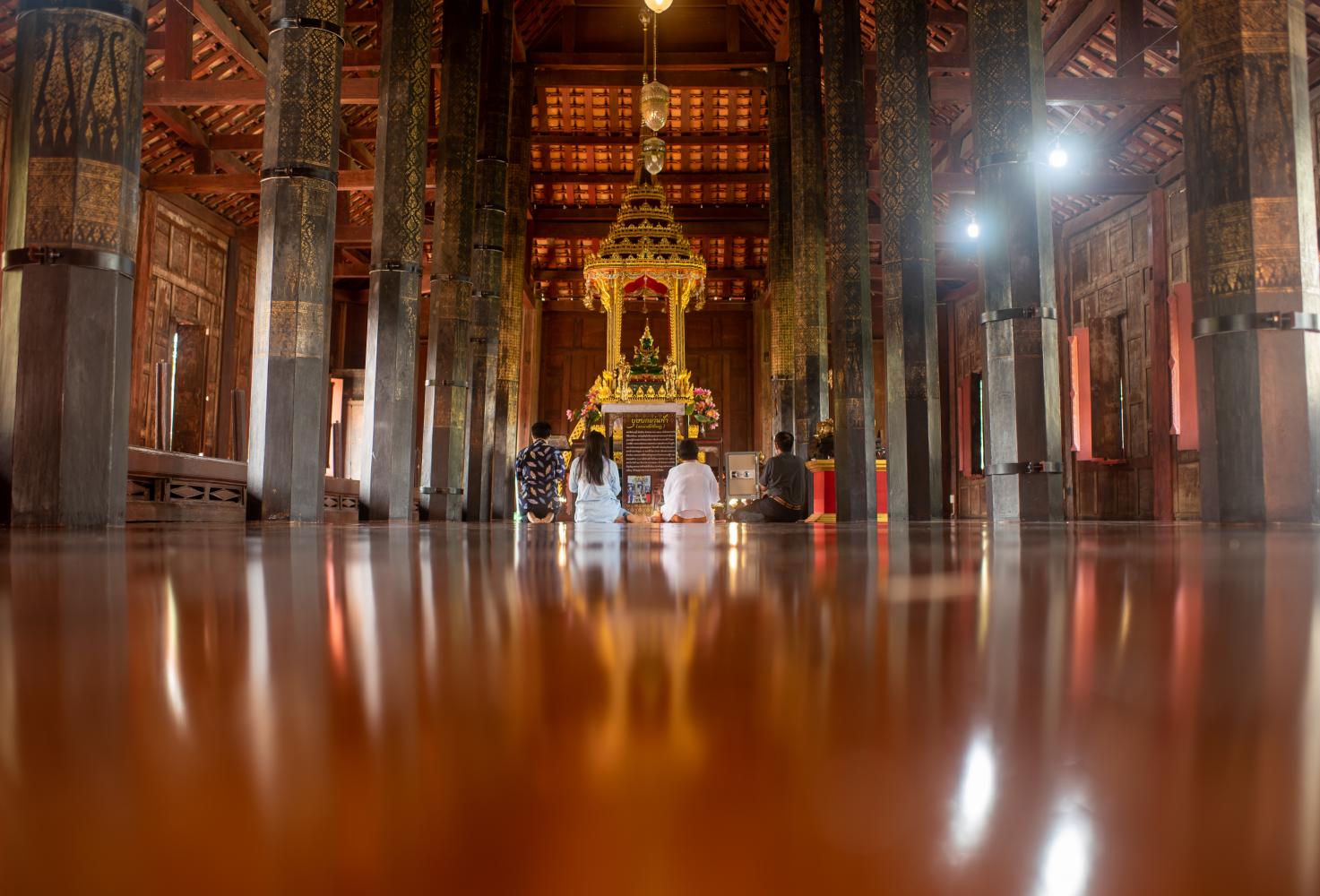 A crimson teak mansion at Wat Yai Suwannaram was relocated from the Grand Palace in the Ayutthaya kingdom to Phetchaburi by Phra Chao Sua. (Photo: Chatchawan Jaksuwong)