So close yet worlds apart
Travel

So close yet worlds apart

From temples to museums to shophouse eateries, Ratchaburi enables visitors to experience the lives of its early Chinese settlers

The gentle winds cooled the summer heat as I sat on the bank of the Nakhon Chai Si River, taking in a beautiful view of the waterside hamlet and lush landscapes of the small town of Sam Phran in Nakhon Pathom province. It's only a 90-minute drive from the hustle and bustle of downtown Bangkok in order to breathe in some fresh air on the weekend.

Despite being concealed from the crowds of tourists, this vantage point provides a peaceful haven for worshippers who come to Wat Thampanyaram Bang Muang to pray and participate in traditional Chinese religious rituals. This temple is a mixture of Mahayana and Annam Nikaya beliefs.

In the past, this area was once home to Chinese immigrants who grew coconut, mango and other fruits as far as the eye could see. People and merchants travelled by boat and this place functioned as a stopover for those cruising from Maha Chai, Nakhon Chai Si and Mae Klong to sell their agricultural goods and seafood at Talat Tha Na.

When riding through the waves put them in peril, they built a holy Teochew-style shrine to house a local god and pray for protection and safe sailing between the reigns of King Rama IV and King Rama V. It has undergone several repairs and now houses an original wood carved statue of a local god in warrior costume stepping on a tiger and dragon to protect the neighbourhood and passers-by.

In 2007, the Suthampituck family donated the land to Wat Kuson Samakhon's abbot to expand this religious sanctuary into the compound of Wat Thampanyaram Bang Muang. The temple itself was built in the Annam Nikaya-style to house Thailand's largest silver Bhaisajyaguru statue (also known as the Medicine Buddha), who wears a garment in 888 dragon-like designs. Following Tibetan Buddhism, the ceiling is shaped like a lotus to illustrate the universe's centre. 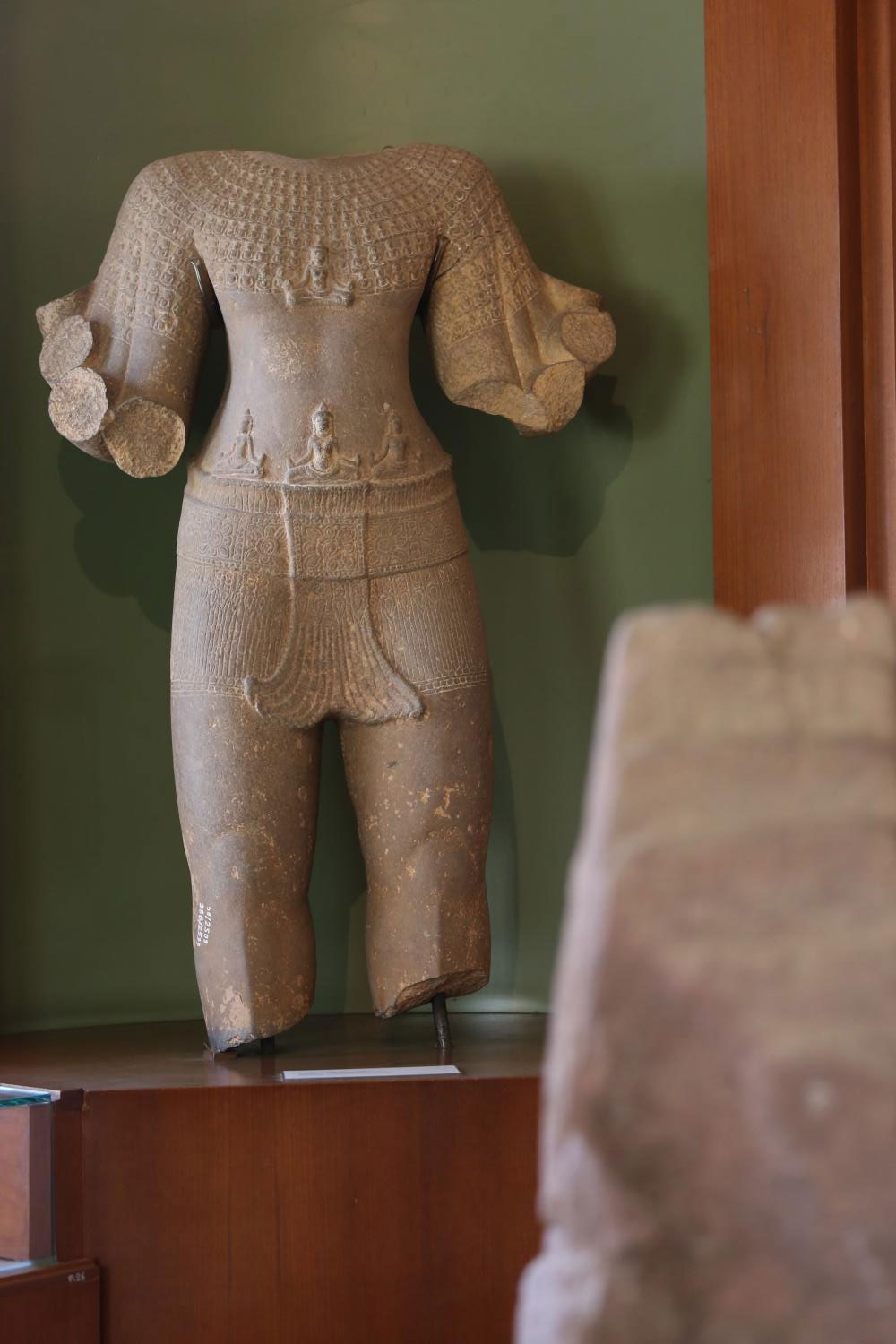 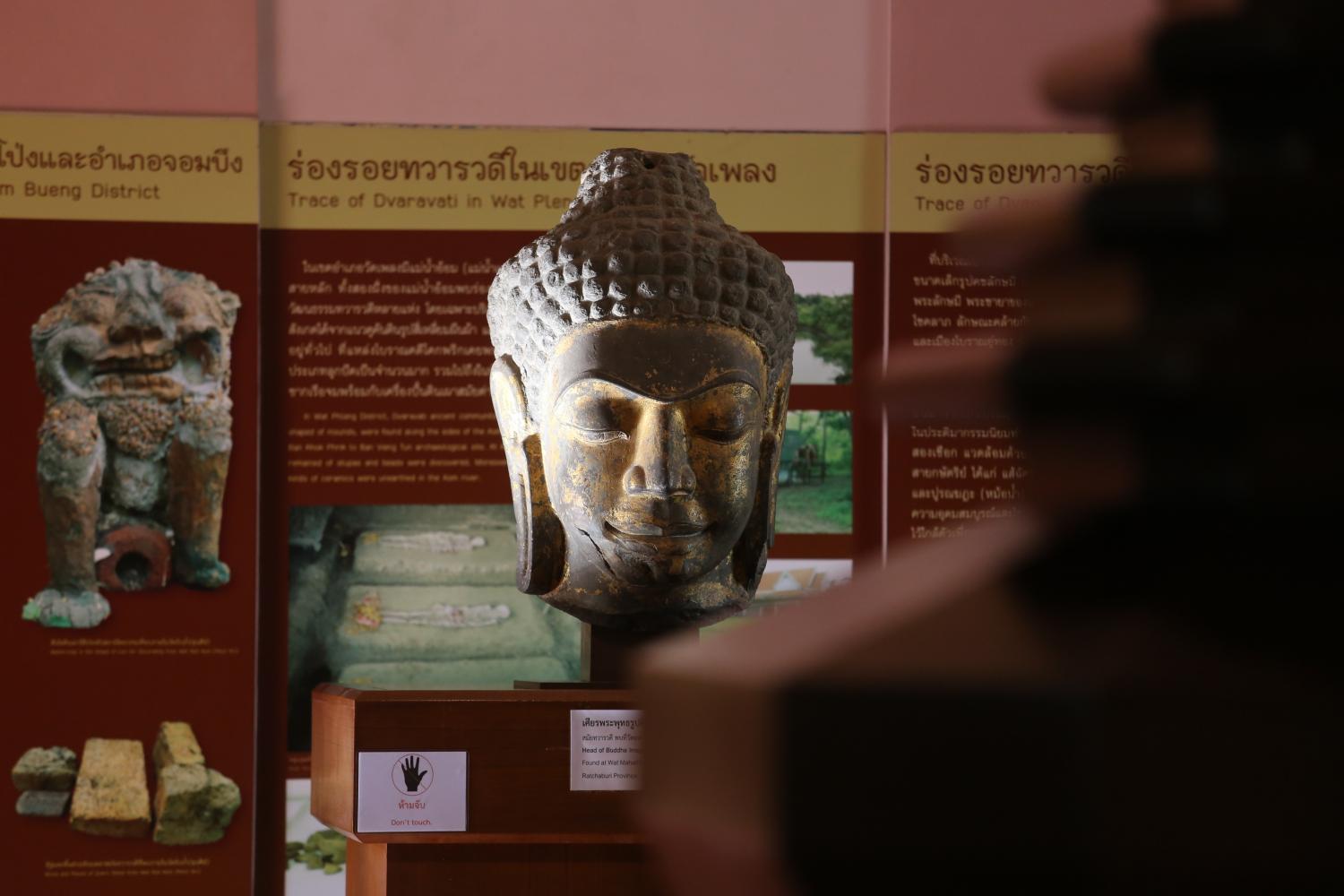 Visitors can ascend to the roof of the neighbouring building to worship a gigantic reclining gold statue of Guan Yin before exploring a mythological grotto on the ground floor to learn about how the God of Mercy aided humanity.

My travel companions and I rushed to the old market in downtown Nakhon Pathom for lunch, but it appeared that we were late because long lines formed in front of the old Tang Ha Seng and Nai Chua shops. They are known for Chinese delicacies such as tender barbecued pork with rice, chicken rice, noodles and chicken with rice and gravy.

We didn't waste any time wandering through local stores, checking out the assortment of vintage fashion apparel, shoes, pyjamas and home items available at reasonable prices. This welcoming atmosphere brought back memories of my childhood.

After recharging our batteries, we travelled for 40 minutes to Ratchaburi's former city hall, which was converted into the Ratchaburi National Museum in 1991. Standing in the heart of the town, this lovely pink colonial building was erected in the reign of King Rama VI and was added to the list of national ancient monuments by the Fine Arts Department.

All of the original structures have been maintained and the 12 rooms showcase a wide collection of artefacts that take visitors back to a time when Ratchaburi served as a primary trading port on the Mae Klong River.

A journey can begin in the prehistoric room, in which ancient stone, pottery and jewellery such as polished stone adzes, carnelian and serpentine stone earrings, tortoiseshell bracelets and earthen vessels that were found at Bor Wee Mine in Suan Phung district and Khok Phlub Archaeological Site in Bang Phae district are displayed. Visitors can learn about the lives of primitive humans and explore Ratchaburi's landscapes, which are rich in soil, rocks and minerals, making it a key supplier to various industries. 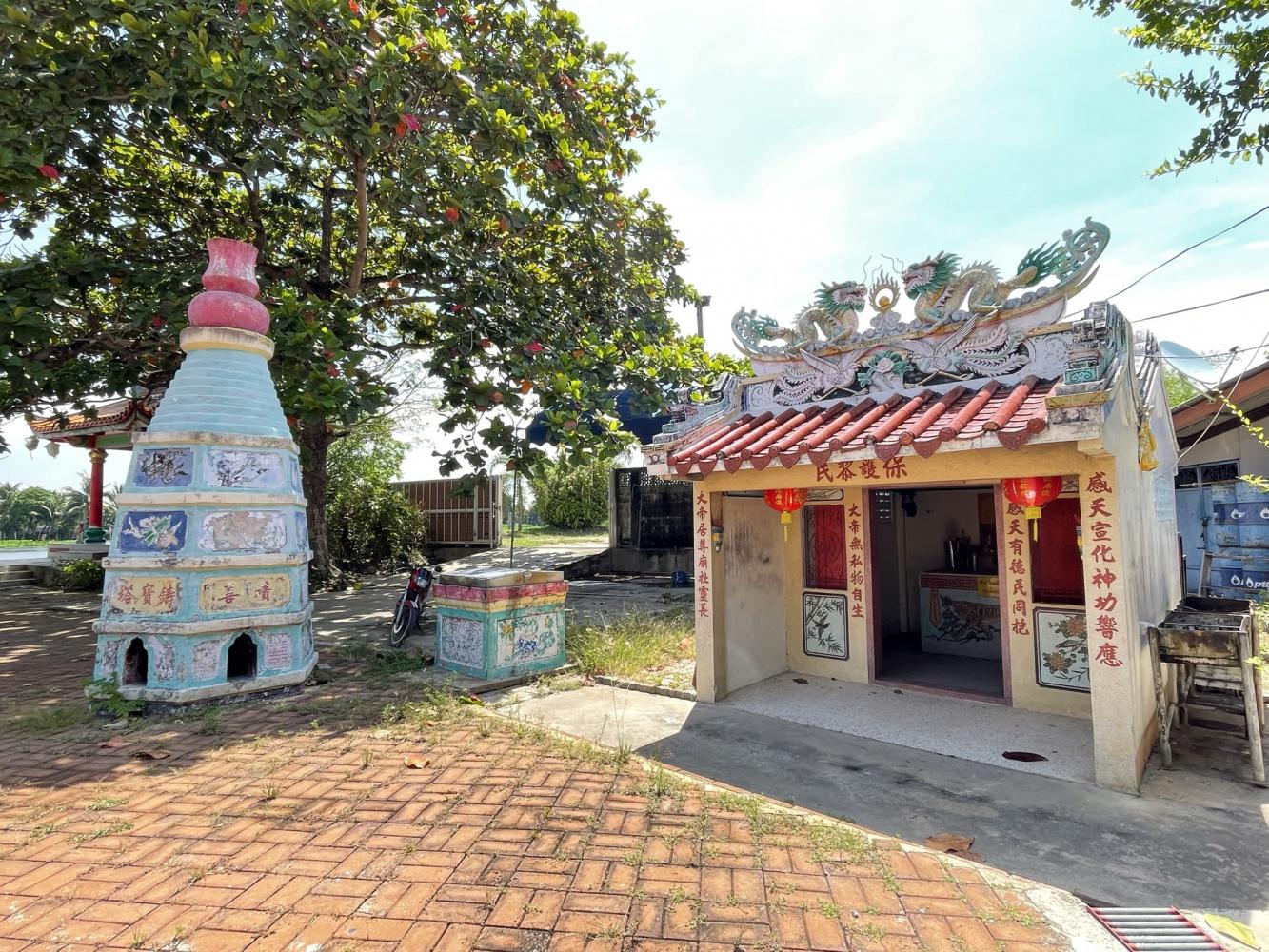 Wat Thampanyaram Bang Muang is a mixture of Mahayana and Annam Nikaya beliefs. 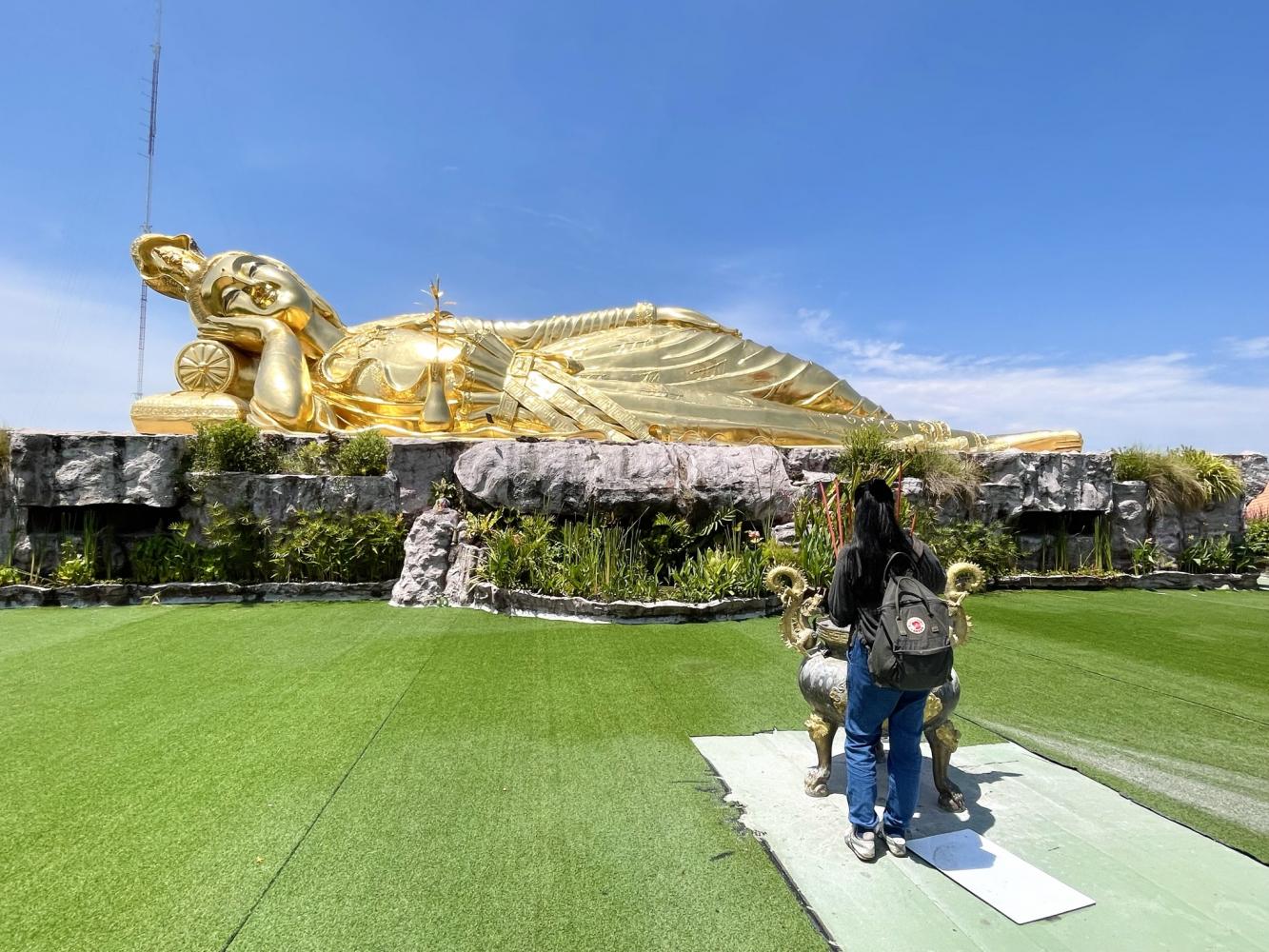 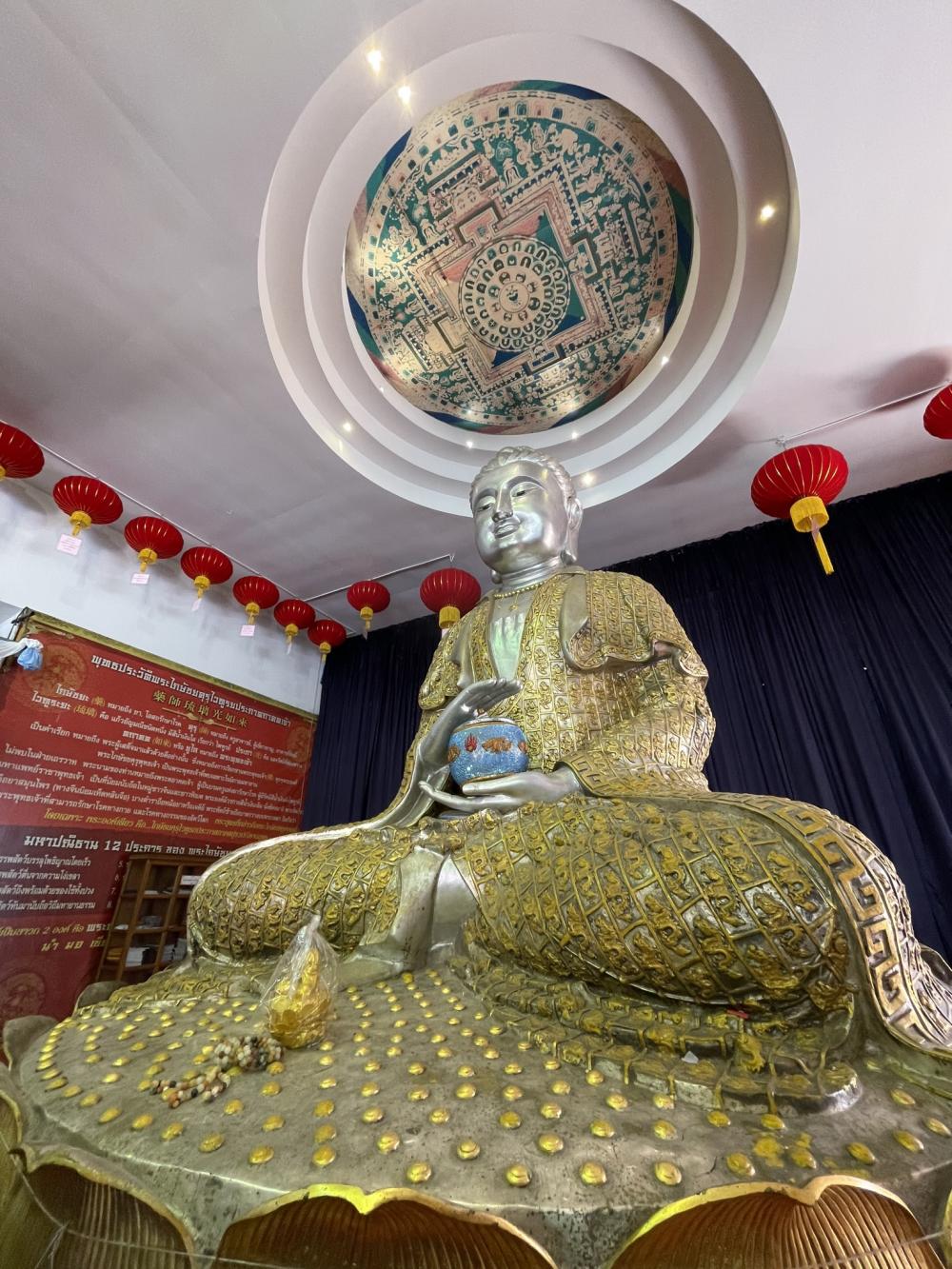 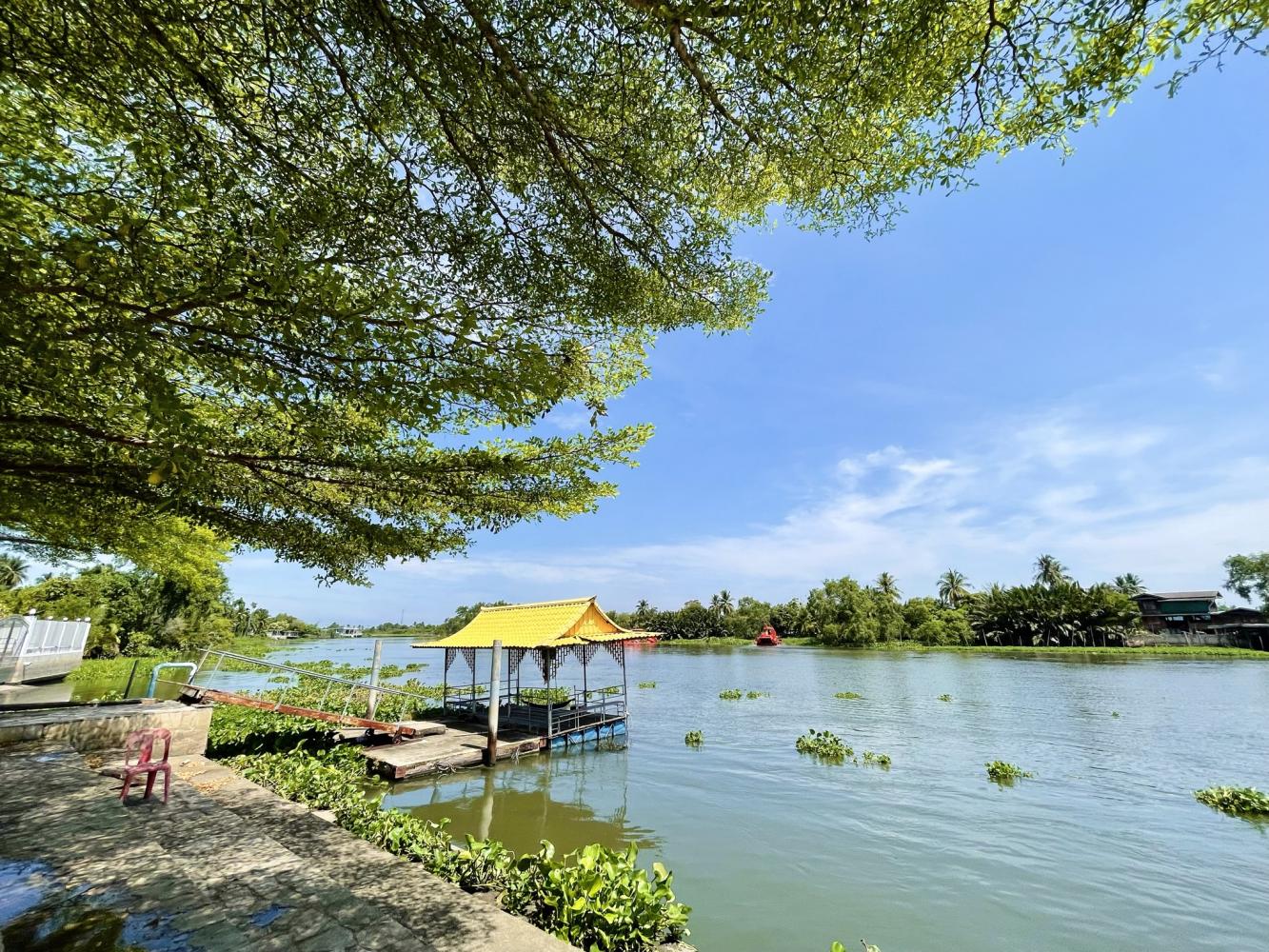 A replica of the Khu Bua ancient town is a testament to Dvaravati culture. Its rectangular city plan was encircled by a moat and earthen walls, while dwarf-like sculptures carried its base on their shoulders to symbolise religious support. This terrain was fertile enough for cultivation and livestock and became a portal for maritime trade, thanks to its proximity to the sea and ease of transportation.

The arrival of Buddhism in Siam was highlighted by the discovery of five ancient Buddha relics. They were kept in 12 stacked silver caskets that were unearthed in the ancient settlement of Khu Bua. Also on display is a Dvaravati-style Buddha head with serpentine eyebrows, flat nose, thick lips and snail-shell hair and a Bayon-style Bodhisattva Avalokiteshvara sandstone statue, which were found at Wat Mahathat and Chom Prasat archaeological site.

Next door, the Sukhothai and Ayutthaya room boasts a collection of a timeworn torsos of Buddha statues and a boundary stone from the Ayutthaya period, which were found at Chedi Hak and Wat Lumdin, as well as blue-and-white porcelain from the Ming Dynasty.

Returning to the present, we continued to the small town of Photharam, home to a Chinese community that specialises in light noodles, home-made soy sauce and tender tofu. Their original recipes have been passed down through the generations, making them vital ingredient suppliers.

One of the big stars in the local culinary scene is the 80-year-old Wat Sai tofu factory, which is now run by its third generation and has managed to preserve its unique traditions to assure authentic flavours and silky textures. 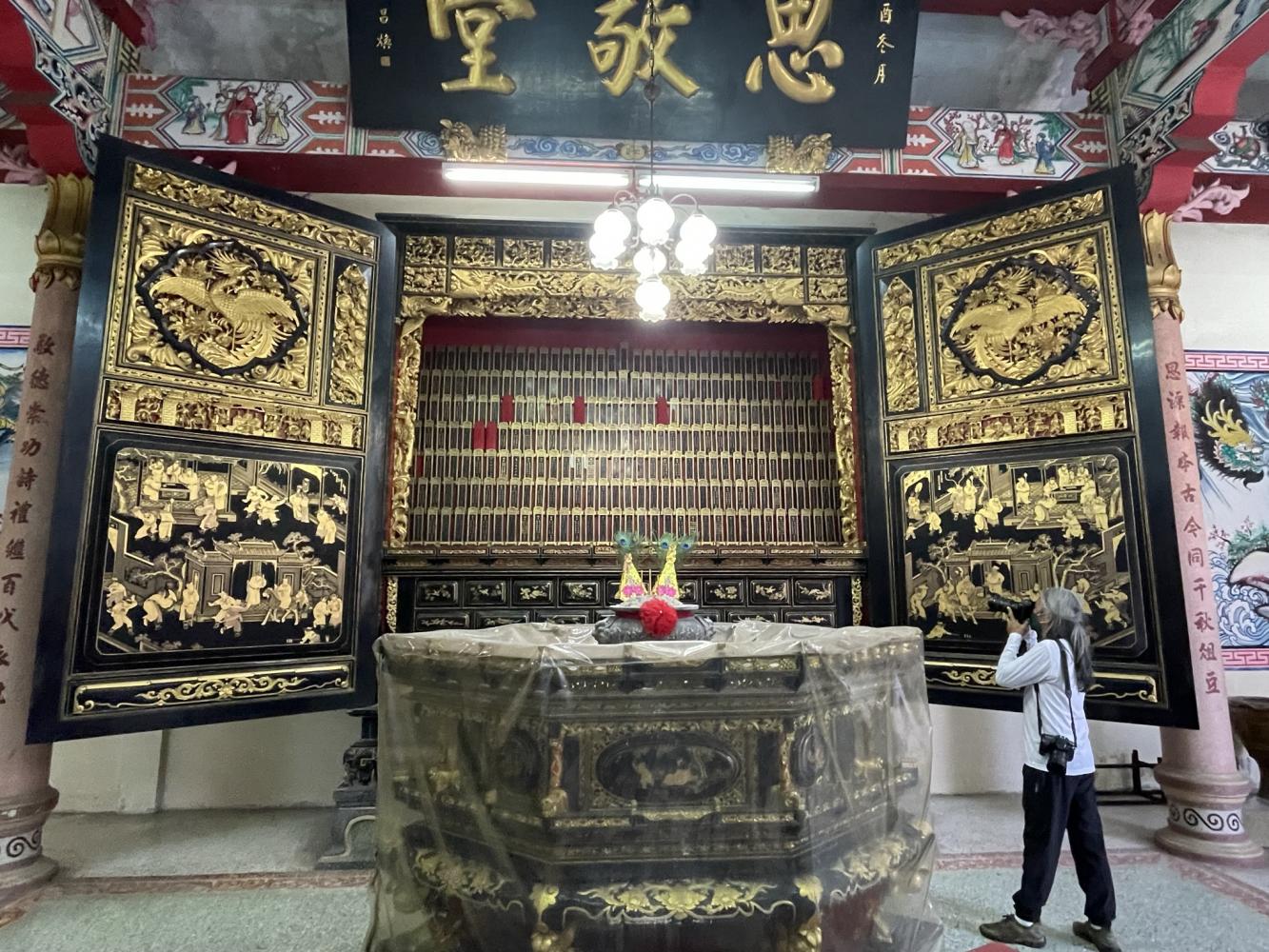 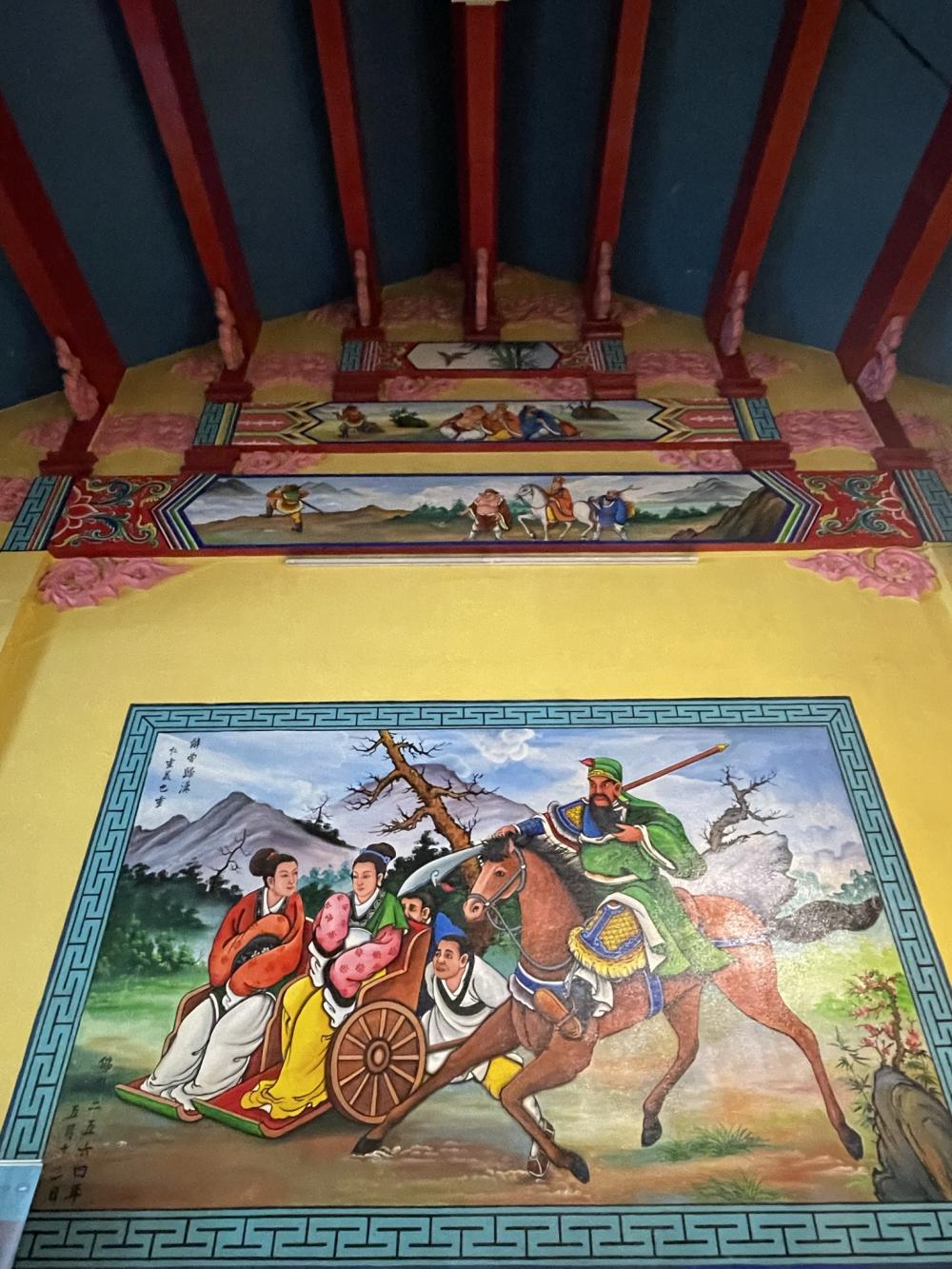 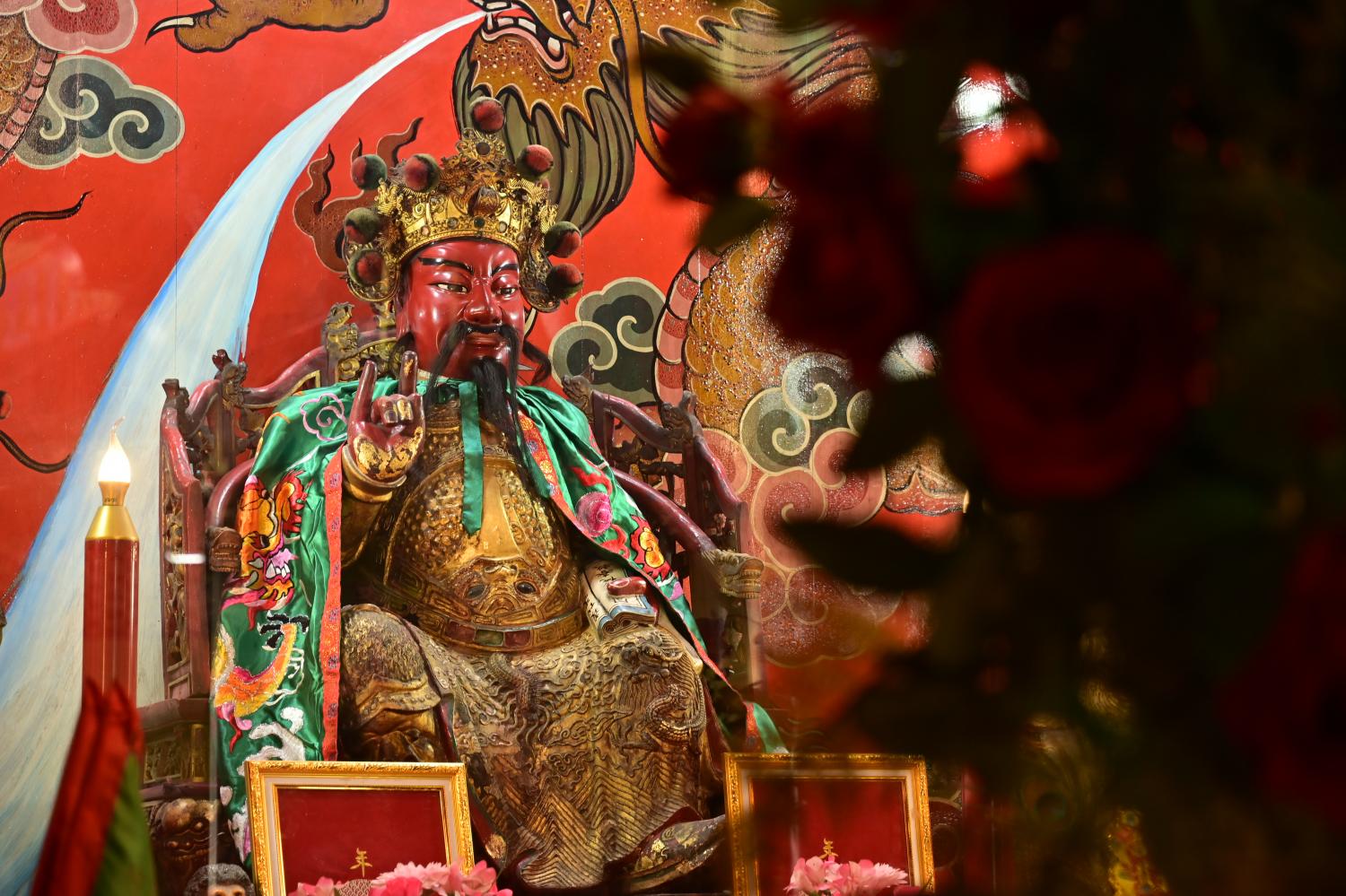 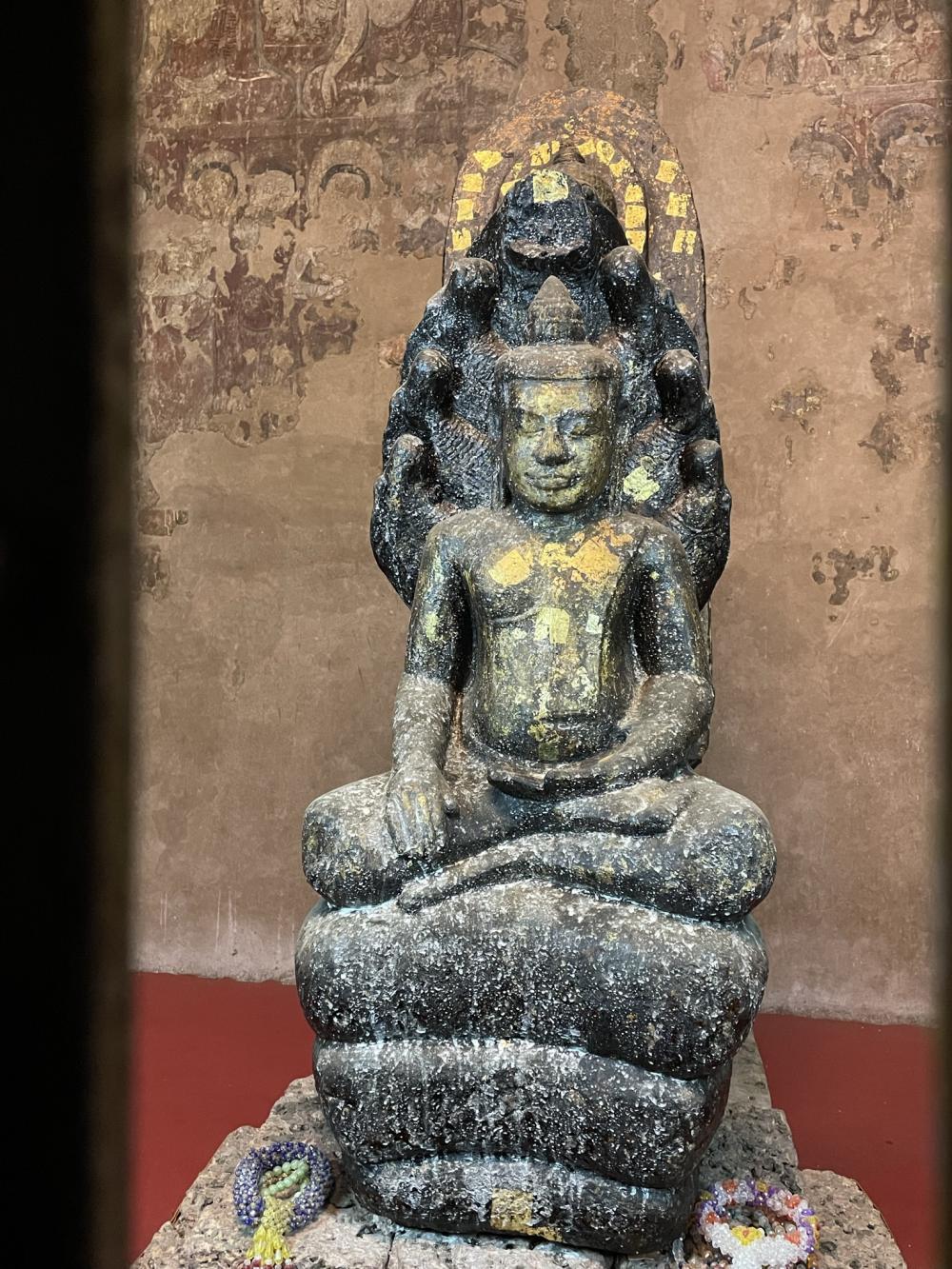 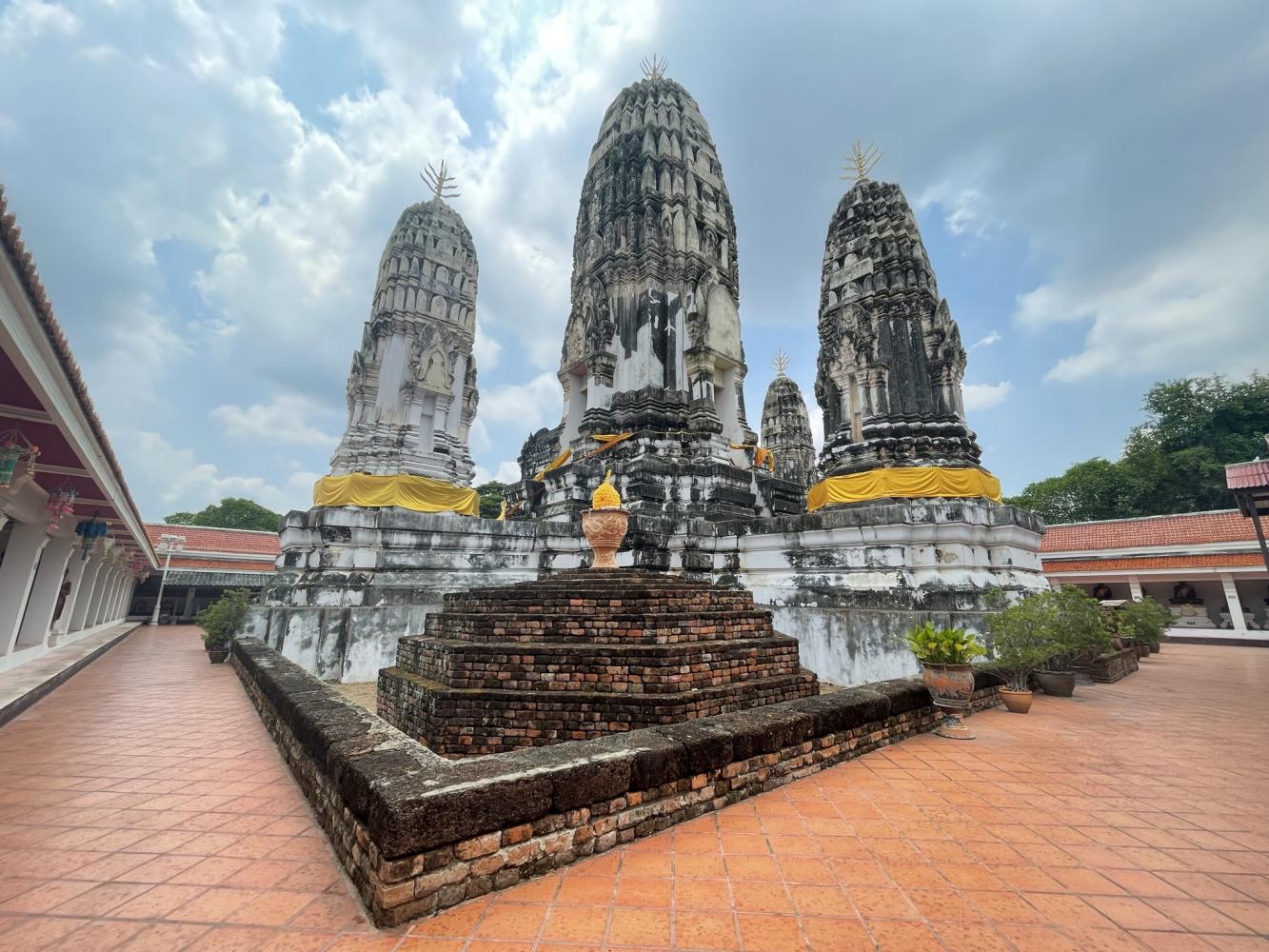 "In the past, we only utilised high-quality soybeans from Chiang Mai fields, but all of the farmers have already closed their businesses. Instead, we must buy ingredients from suppliers. But our classic recipes retain their distinctive flavours and gentle textures," said owner Wasin Sasomwuwan.

"We can benefit from every step of the tofu-making process. Soybean water becomes fresh soy milk and air bubbles produce chewy-but-soft tofu skin, while our vitamin-rich soybean meals are great for cow feed. We make everything to order, so customers should reserve one day in advance."

Waking up early, we enjoyed local breakfast and dim sum in downtown Ratchaburi and a walking tour seemed to be the best way to experience the local way of life. In the past, Chinese and Mon migrants established their communities along the banks of Tha Chin and Mae Klong rivers that became a commercial hub and a major sugar and rice trading route.

In 1899, he donated money to enlarge the highly revered Guan Yin Shrine, which was later renovated in 1962 in the Teochew-style by the Prachanukul Ratchaburi Foundation. Just a short stroll from Ratchaburi National Museum, it sports a high ceiling and the ground is shaped like a pond to attract good luck, while colourful murals on the walls depict Eight Immortals crossing the sea, Monk Xuanzang and his disciples travelling to India, and the Three Kingdoms.

Inside, it also houses an original wood carved statue of Guan Yu dressed in a Chinese warrior costume, with a dragon's eyes on the stomach, the left hand holding a scripture and the right hand capturing its beards. People come to ask him for professional and educational achievement, good health and safety. 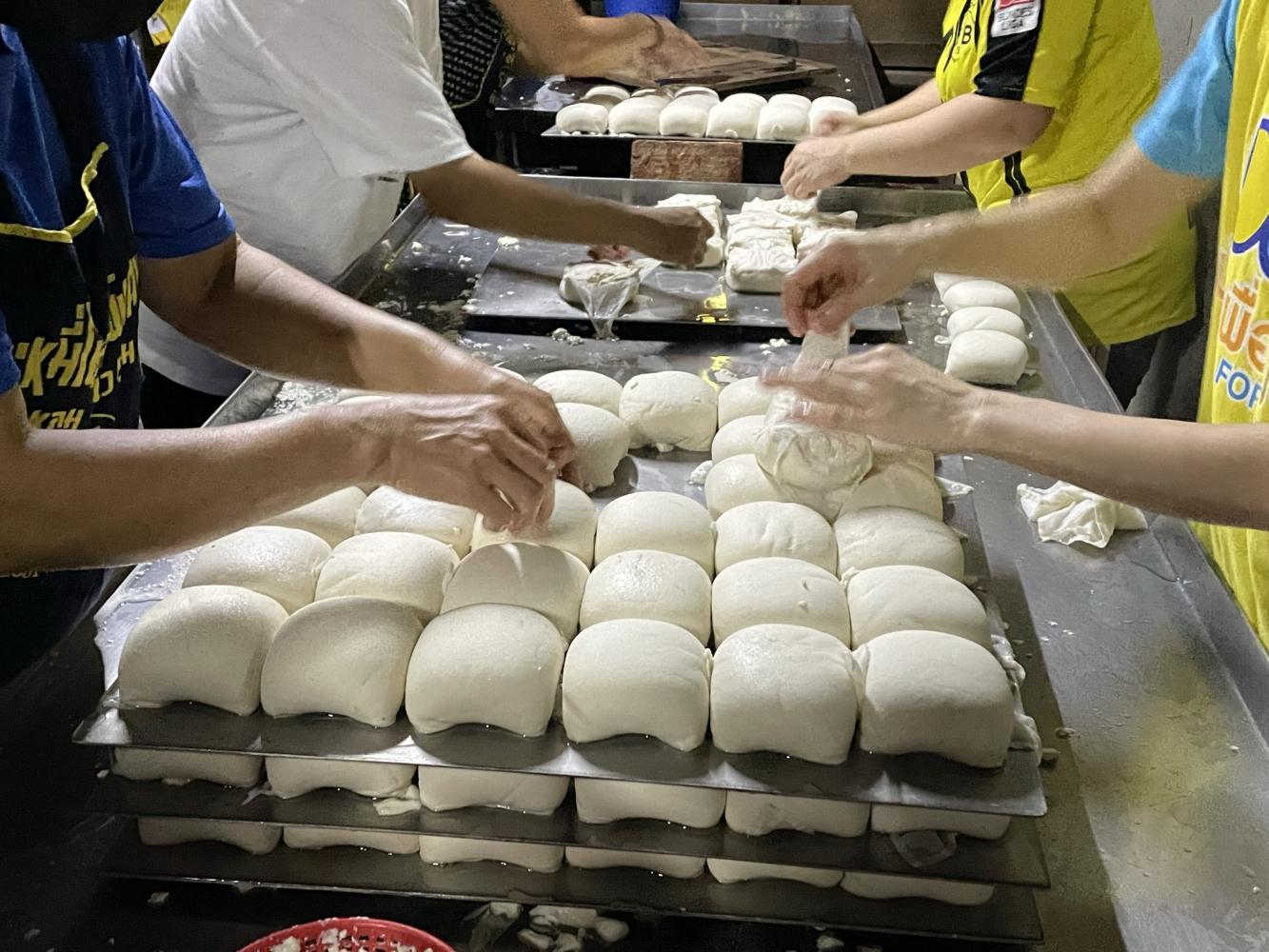 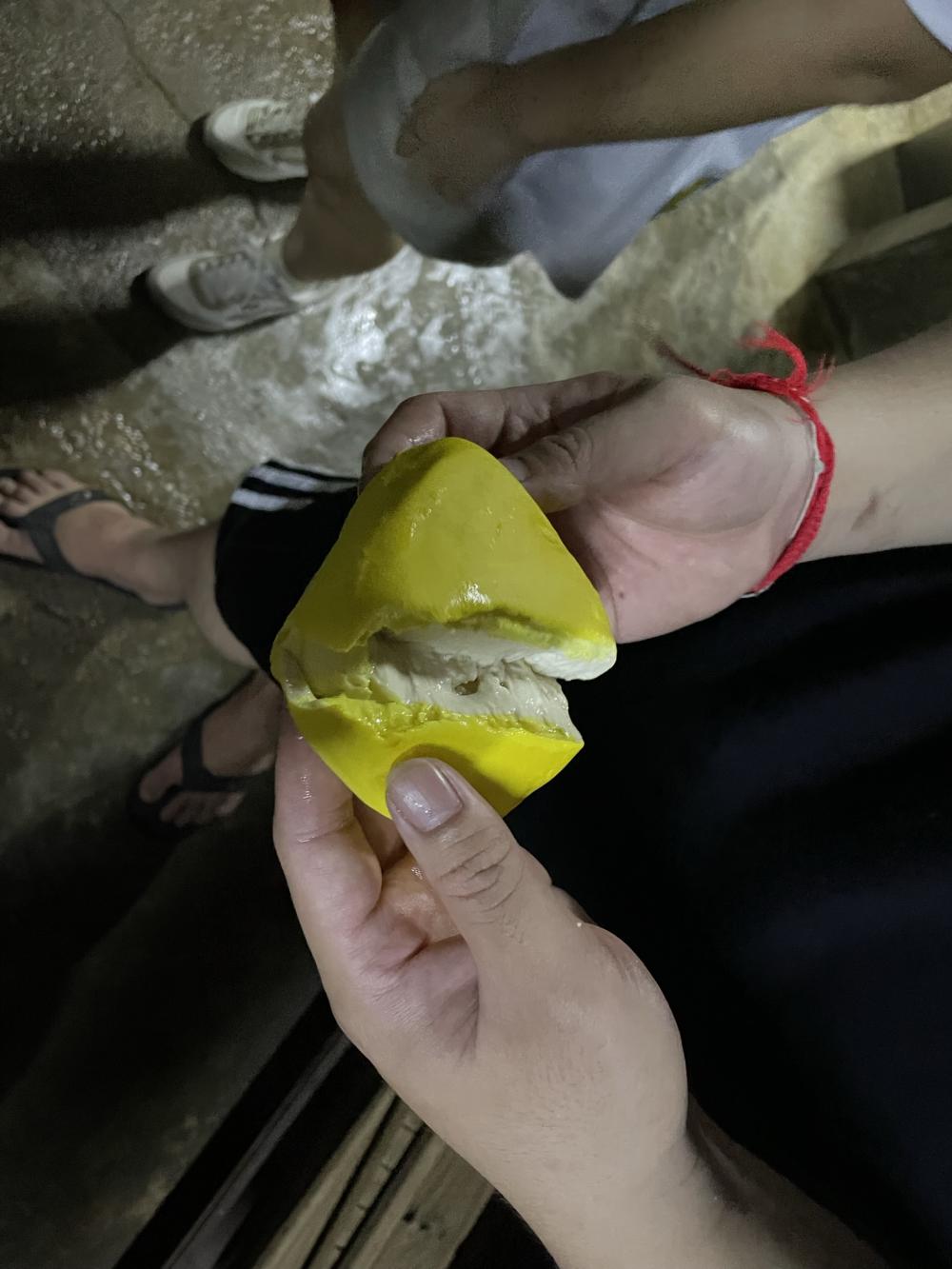 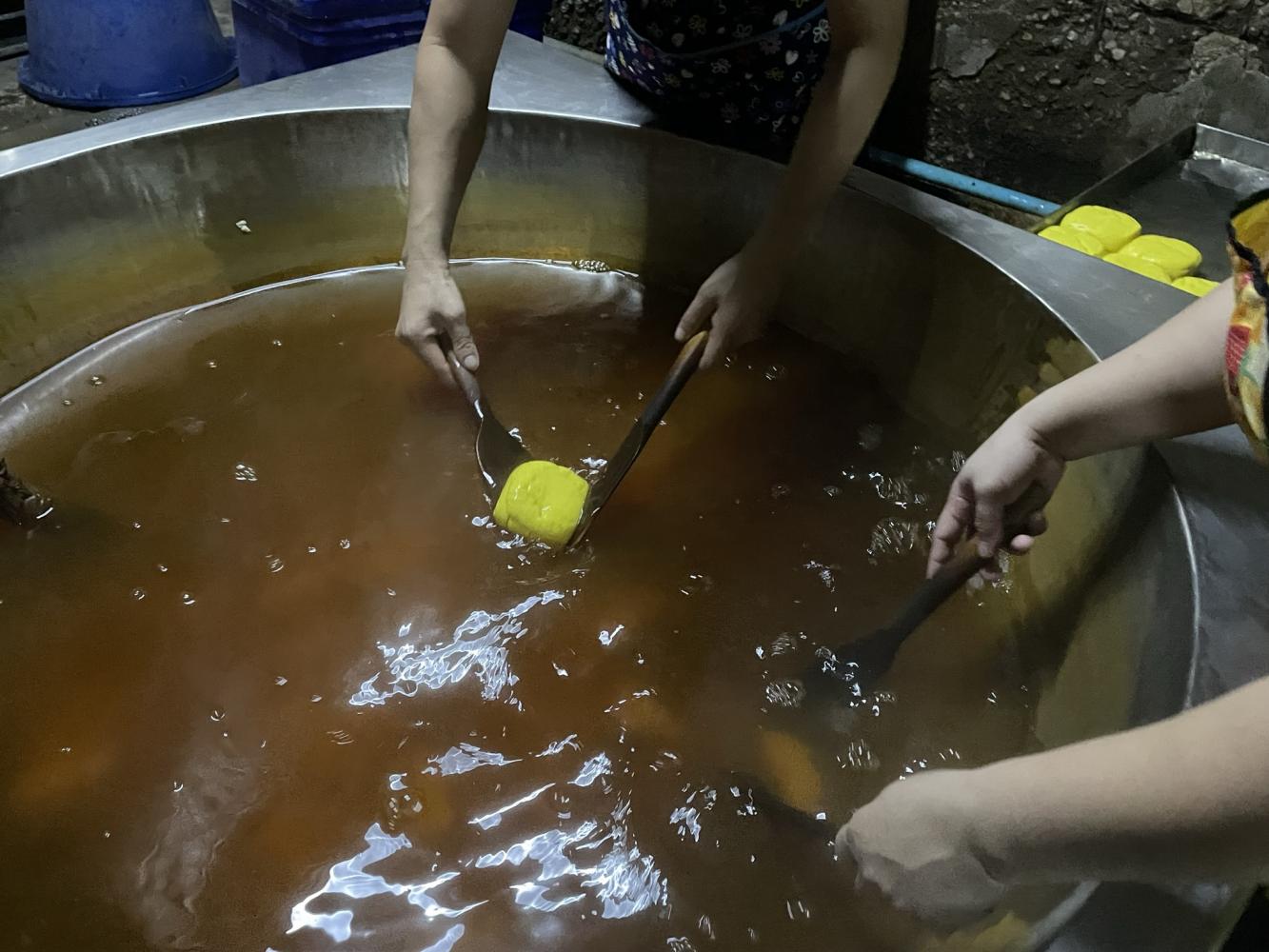 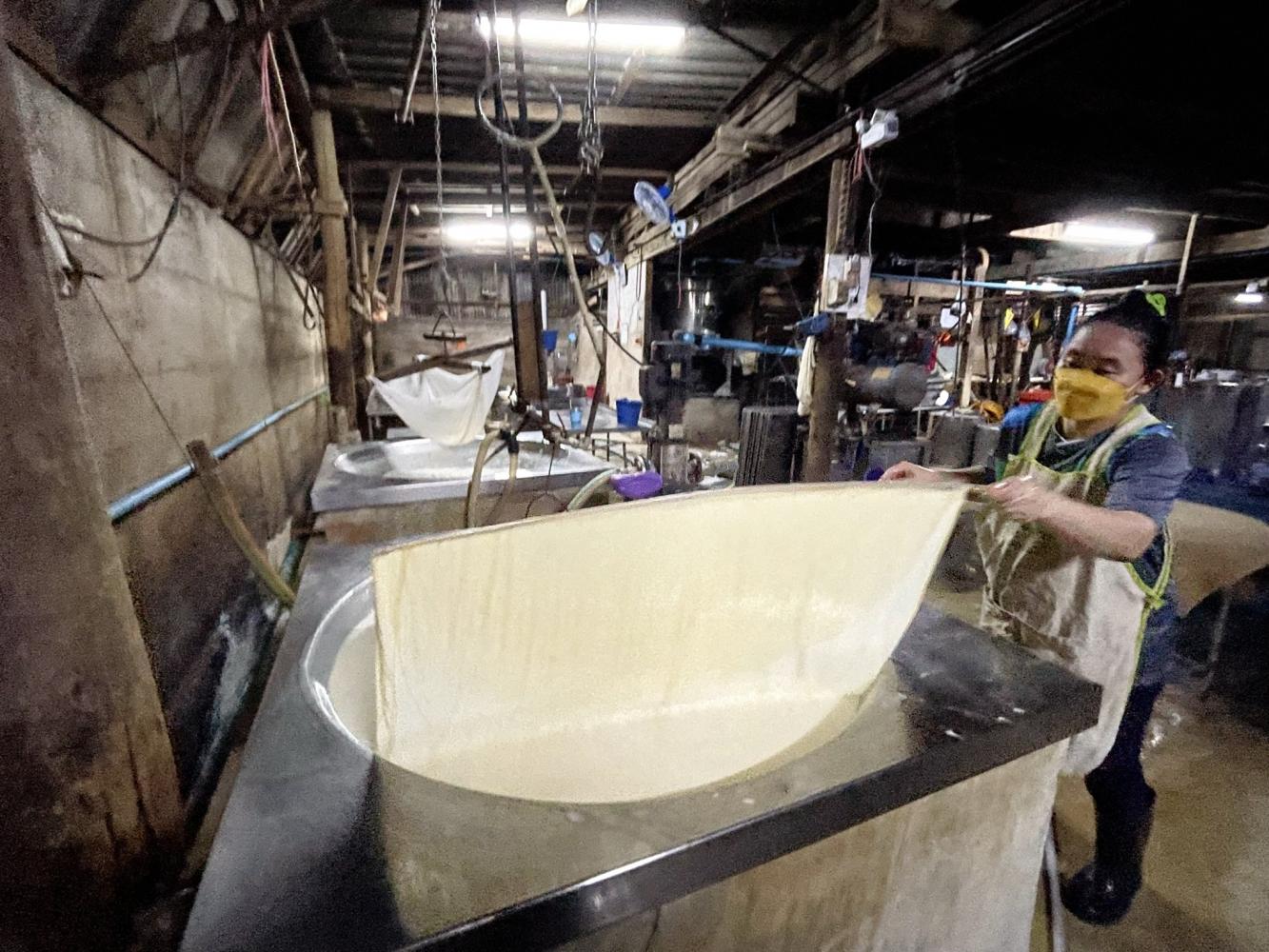 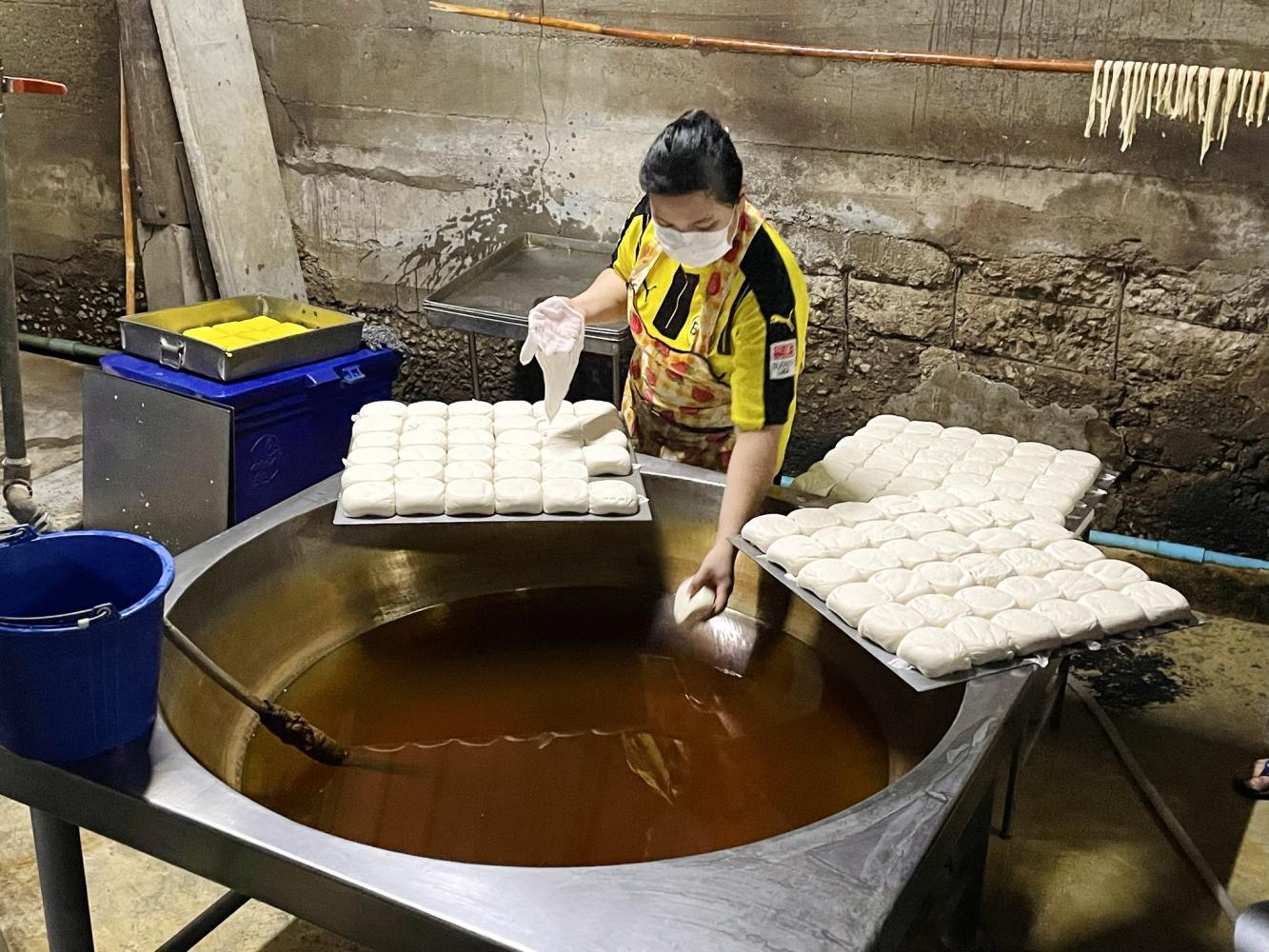 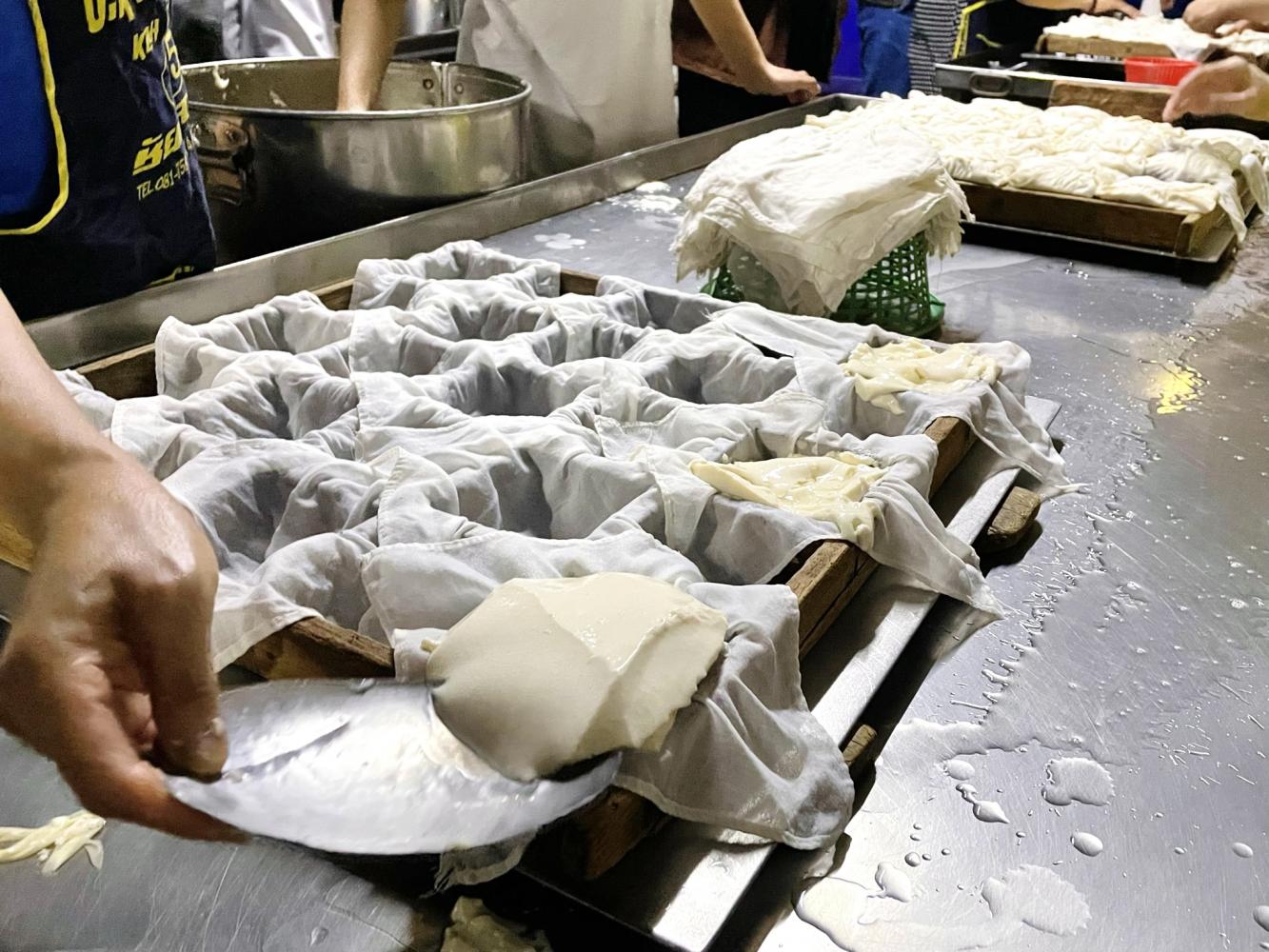 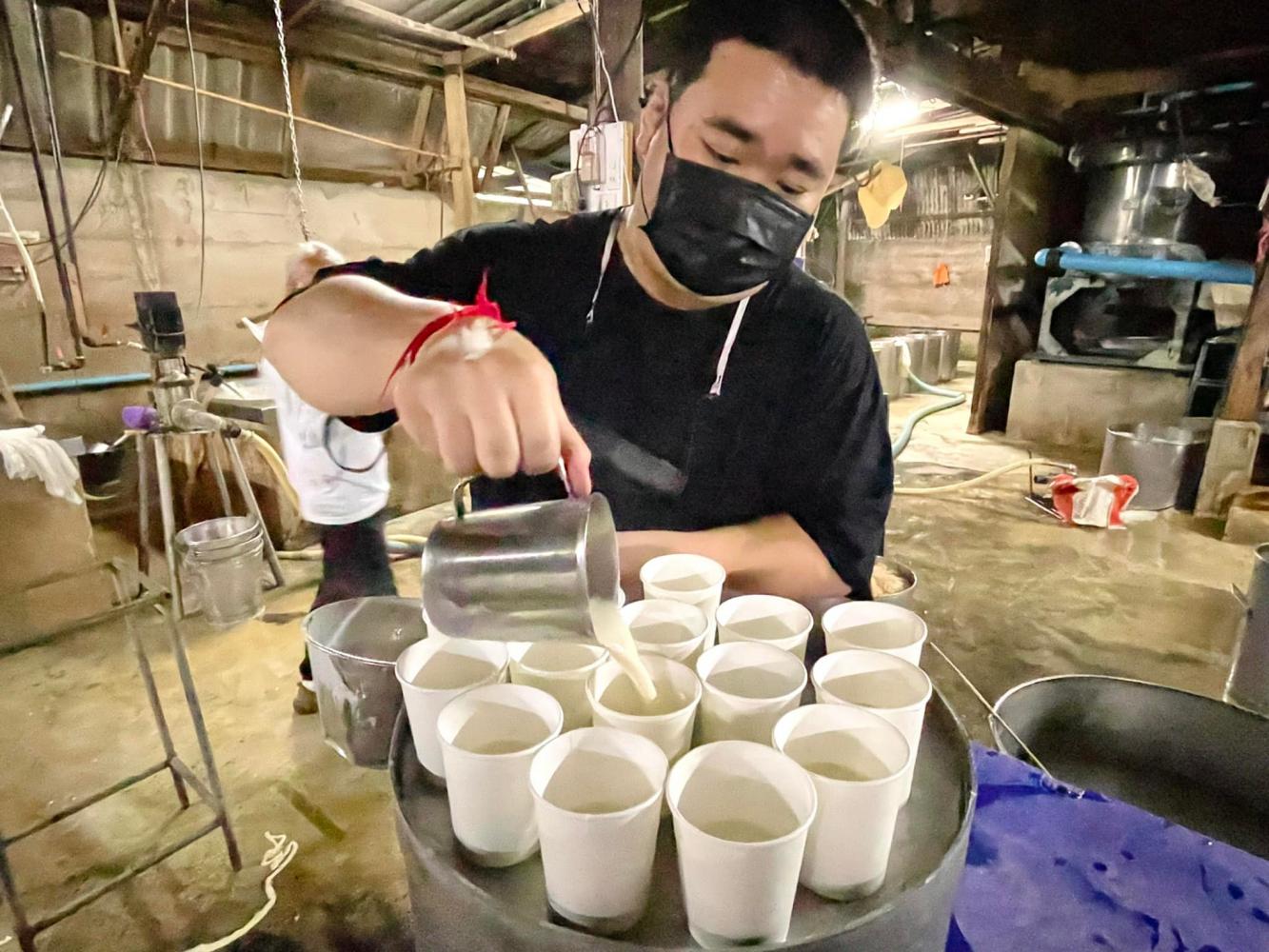 Then we wound our way through a maze of old shophouses to Wat Sri Suriyawong Saram, which is a blend of Thai and European-style architecture. The towering archway is embellished with cupid-like sculptures and its yellow ubosot contrasts with a line of grey and white arch pillars, while its gable depicts the solar deity riding a lion chariot.

Focusing on simplicity, the walls are decorated to seem like marble, and a realistic-style Buddha statue sits in the centre, while King Rama V provided a French chandelier to add elegance.

Our last destination is Wat Mahathat Worawihan, which was built during the Dvaravati era when Hindu beliefs were supplanted by Mahayana influence. Thanks to its prime location, a Khmer-style sanctuary was erected above the temple around the 13th century before a new vihara and phra prang sprang up in the early Ayutthaya era to simulate Mount Meru following the Buddhist beliefs. Visitors can learn about the constructional development using long-lasting bricks rather than laterite.

A pair of Ayutthaya-style Buddha statues is displayed in the historic main hall, and a complex of five stupas is adorned with magnificent stuccos representing Buddha and Narai riding a garuda capturing a naga. A prominent stupa has an antique Bayon-style figure of a sitting Buddha guarded by a seven-headed naga. 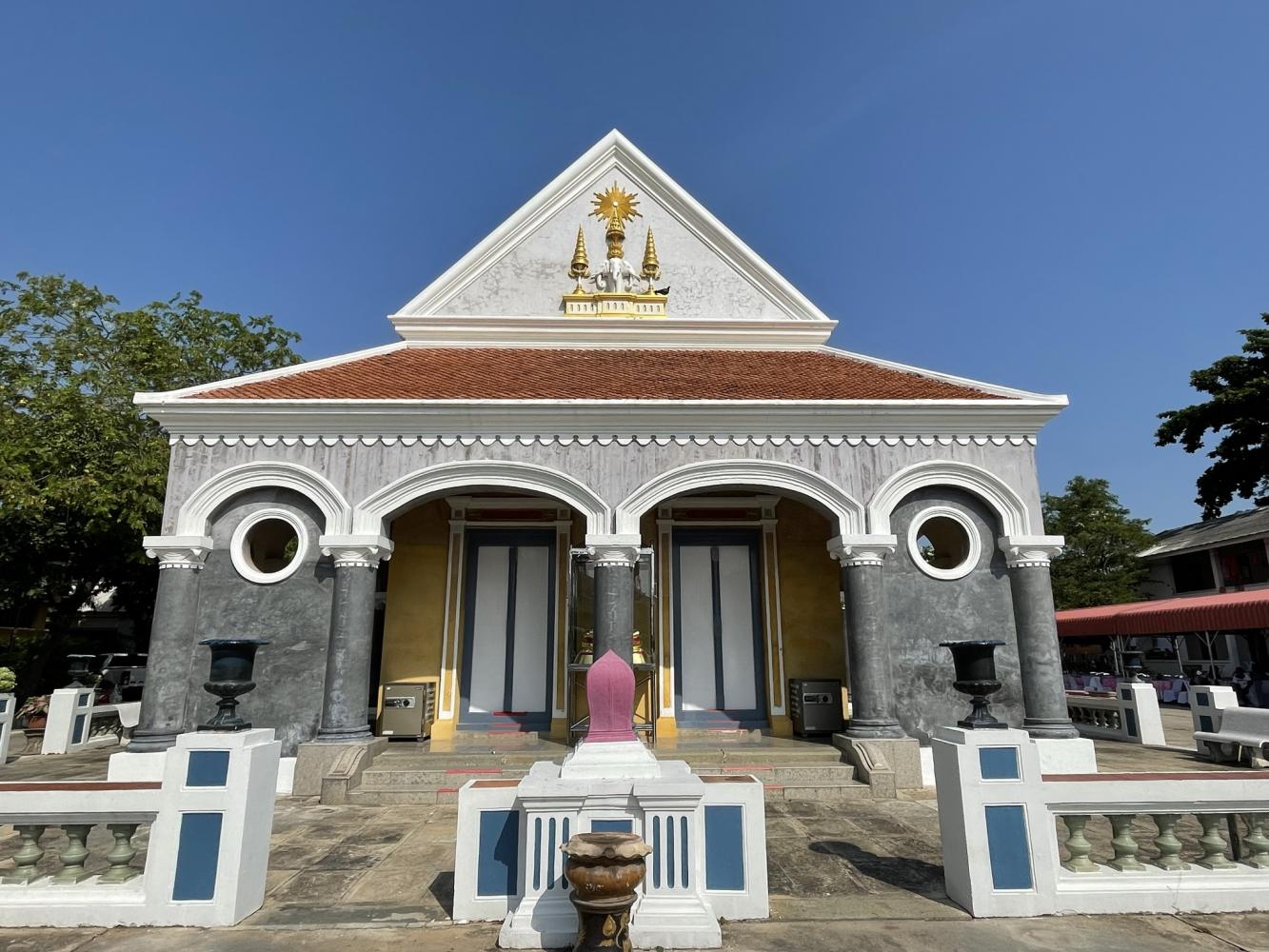 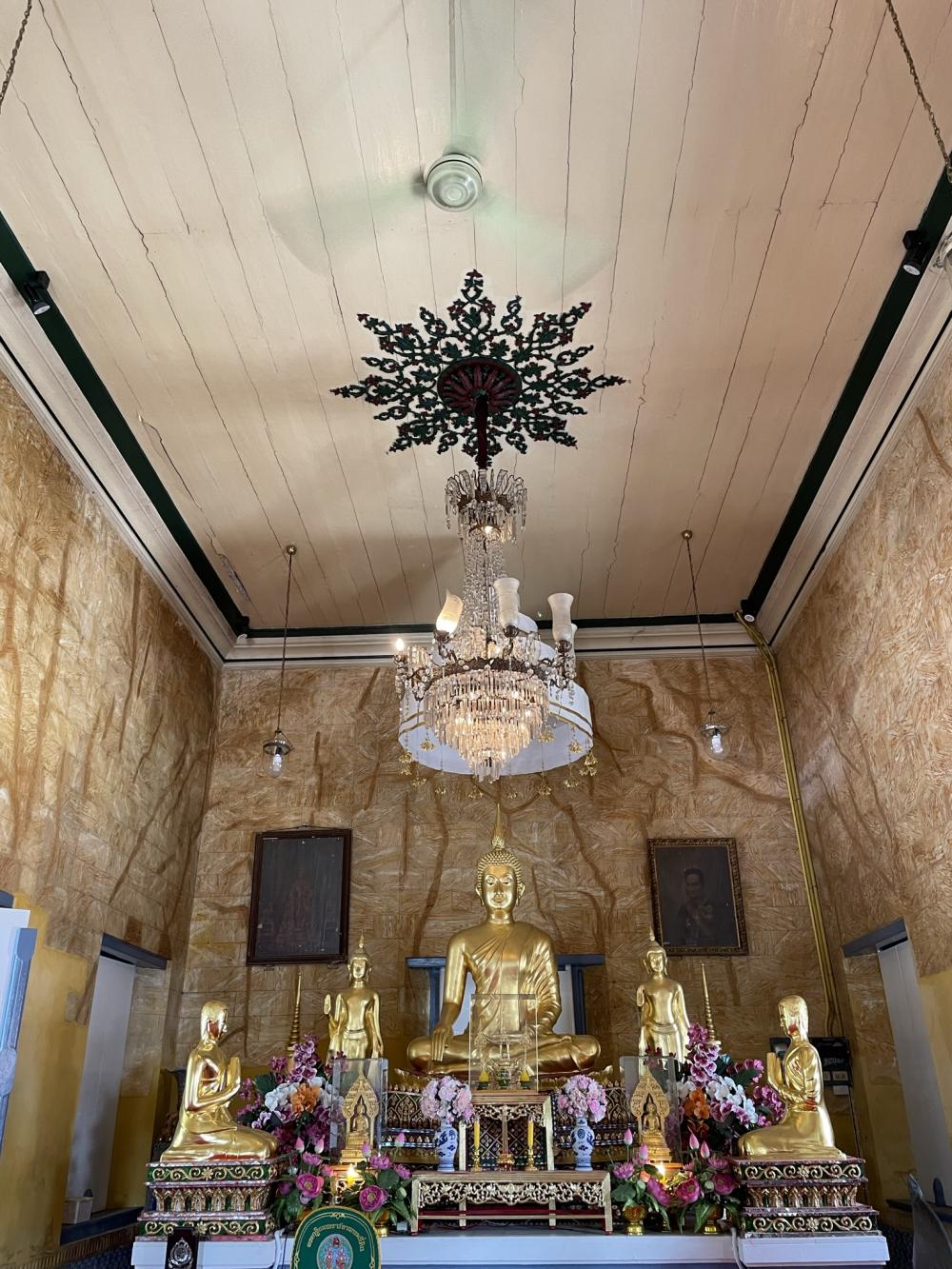