SONGKHLA: Hoteliers in Hat Yai hope a special, direct train from Kuala Lumpur to the southern economic hub on Friday will not be the last.

A direct train from the Malaysian capital would help spur the economy in the southern province as passengers would not have to change trains at the border in Padang Besar, said Sitthipong Sitthipattaraphapa, chairman of the Hat Yai Songkhla Hotels Association.

KTM Bhd, which operates trains in Malaysia, offered the “Sawadee Special” train to celebrate Malaysia Day on Sept 16. The 12-car train left the central station in Kuala Lumpur at 10.10pm on Thursday for the 440km journey, arriving at Hat Yai at 8.30am the next day. KTM said the train carried 386 passengers but Thai officials put the figure at 402.

Most passengers on the train were tourists who were spending their long holiday weekend in Songkhla or neighbouring provinces as Malaysia Day is a public holiday, according to Thai officials. 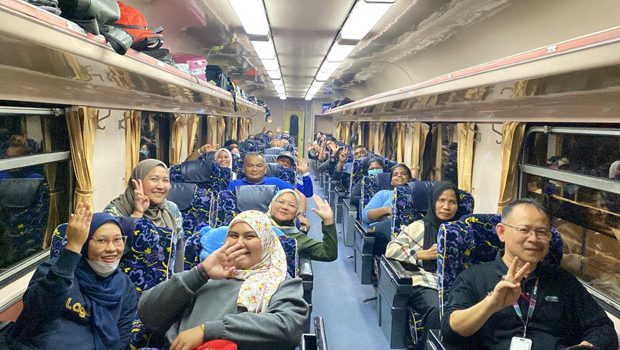 They are scheduled to return to Kuala Lumpur on Sunday, departing from Hat Yai at 11.30am and reaching their final destination shortly after midnight.

“This is a special train. If possible, we would like to see regular service. That would be good as it would give train passengers a convenient way to travel to Hat Yai,” Mr Sitthipong said.

The association said hotels in Hat Yai were already fully booked from last Wednesday to this coming Sunday by Malaysian tourists celebrating their long weekend, and for a meeting of Public Health Ministry officials.